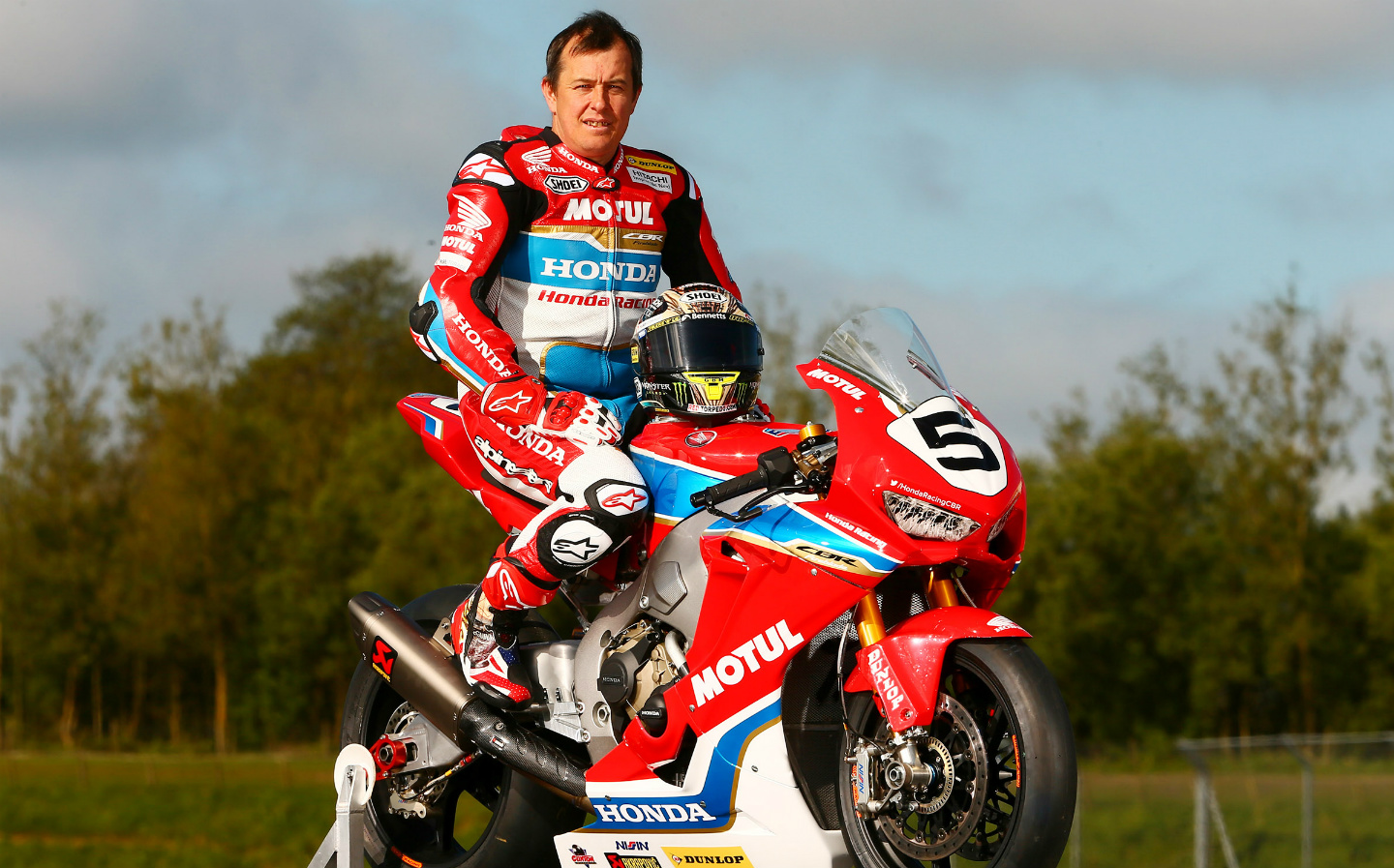 IN MODERN motor sport nothing comes close to the nerve-shredding danger and excitement of the Isle of Man TT. Imagine the Monaco Grand Prix on two wheels, at speeds topping 200mph, with narrower, bumpier, twistier roads and less protection.

John McGuinness is one of the all-time kings of the 37.73-mile time-trial course, which has claimed around 250 lives since it began 110 years ago. With 23 class wins since his debut in 1996 (second only to the late Joey Dunlop on 26), he should now be taking part in his 19th TT. But just days after we spoke to him, McGuinness crashed out of the North West 200 road race in Northern Ireland, suffering a broken leg, three broken ribs and four broken vertebrae. He admits it will be “a long road to recovery”.

Speaking about the dangers of his sport, McGuinness, 45, was philosophical: “I love racing. My job is to know exactly where I should be on the road, what gear I’m in, what speed I’m doing; my brain needs to be 400 yards up the road, round the next two corners.

“Yes, bad things happen, but you can’t dwell on stuff like that or you’d never get back on a bike. I’m far more scared on public roads. As soon as I get south of Preston, it feels like every other driver’s trying to kill me.”

McGuinness started riding motorbikes around his front yard in Morecambe, Lancashire, when he was just four. “My dad was a wheeler ’n’ dealer. He started with bikes, then cars. We had all sorts. Anything with an engine, wheels and two months’ tax.”

At 16, his father gave him a second-hand Suzuki AP50 motorbike and Lancashire’s roads were never the same again. “I was young, daft and used to ride like an idiot,” he says. “Dad kept hearing, ‘Your lad’s gonna get hurt’, so he grabbed me by the scruff of the neck and threw me on the racetrack. Back then, I had no interest in cars, but I wanted to pass my test so I could pick my girlfriend up from school.”

Although he did buy a car — a Honda Civic — the first vehicle he really cared about was an Iveco 60-10 van. He bought both in 1990, the year he started racing. “Every shilling was invested in getting to races; I even swapped the Civic for a caravan. Dad was a grumpy bastard — he bagged the caravan. Me and my missus had to sleep with the bikes in the van.”

McGuinness had trained as a bricklayer, but it was the racetrack that beckoned. A sponsorship deal in 1996 meant the Iveco was swapped for a 7.5-ton lorry. “I didn’t own a house, but I’d bought a proper race transporter. That truck was my life: my home, my dreams, my future. Even if it did have Big Green Parcel Machine down the side.”

His speciality is road racing, currently with Honda Racing. Those 23 TT wins have bought him a nice house in Morecambe and some decent motors. “God knows why, but I had an Audi 80 in the late Nineties; I liked the shape. That was followed by a couple of BMWs. One was a phoenix yellow M3 with leather seats and 19in wheels. I thought I was Jack the lad, but, looking back, I didn’t need the flash motor — I did my racing on the track. I needed a sensible car.”

McGuinness’s driving has calmed down, but old habits die hard. “You find this a lot with bikers: put us on something with wheels and it turns into a race. I bought one of them John Deere Gators to help me sort out the garden. I’ve almost killed myself twice on the bloody thing.”

John McGuinness: my life in cars

The Isle of Man TT runs until Friday. John McGuinness’s memoir, Built for Speed, is out now