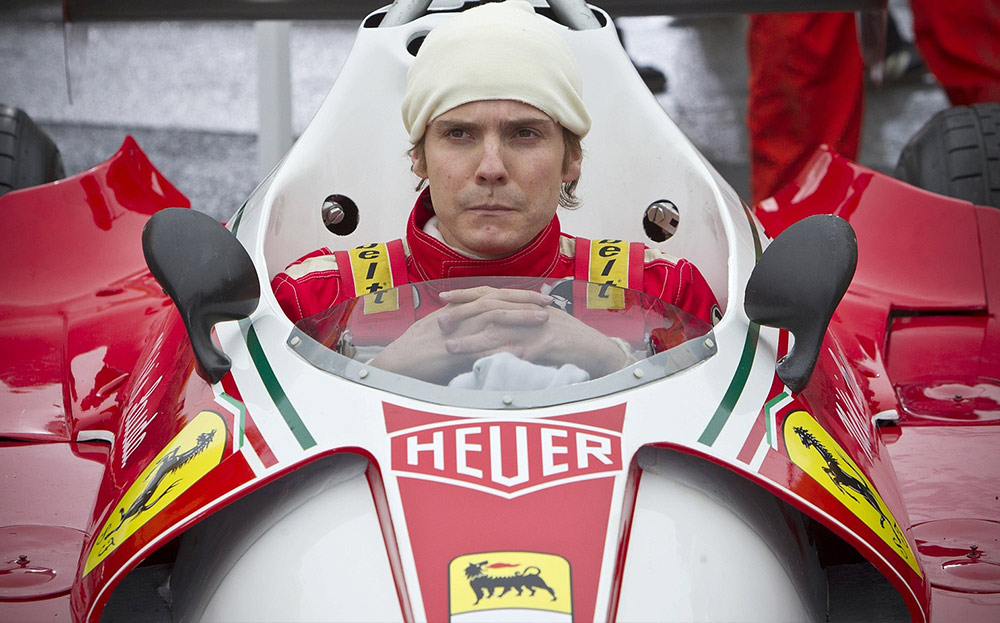 DANIEL Brühl grew up playing with model Ferraris and hoped one day to take one for a test drive. But getting behind the wheel of a Formula One Ferrari and taking it for a spin around the Nürburgring was beyond the German actor’s wildest dreams — until he landed the part of Niki Lauda, three-time F1 champion, in Rush, Ron Howard’s 2013 film about the Austrian driver and James Hunt, his British rival, played by Chris Hemsworth.

“We actually drove Formula Three cars in the film — made up to look like Seventies F1 cars by our team of British mechanics,” Brühl explains. “The first time I drove one, one of the wheels came off and I spun out of control. I was scared but, at the same time, I could fully understand why people want to become racing drivers.”

To help him prepare for the role, Lauda, by then in his sixties and running his own airline, agreed to meet Brühl. He flew him to the Brazilian Grand Prix in his private jet, where he introduced him to drivers including Sebastian Vettel, Nico Rosberg, Nelson Piquet and Sir Jackie Stewart.

“In comparison to the real drivers, I’m just a clown,” says Brühl. “But it was fun to learn how to drive these cars. They are very, very tiny and extremely claustrophobic, with tiny pedals.

“The sensation of speed is much greater, it’s extremely loud, they smell of petrol, you can only drive them very fast and then the whole car vibrates and you feel it throughout your body.”

Brühl, 37, was born in Barcelona (his mother is Spanish) but grew up in Cologne and is one of Germany’s most successful Hollywood exports. His credits include roles in Quentin Tarantino’s Inglourious Basterds and The Bourne Ultimatum.

“From the outside, all you could see was two naked guys in a Porsche. I will never forget the faces of the petrol station staff.”

He started acting at school and was forced to buy his first car — a Volkswagen Golf — before he’d even passed his driving test. “We shot a car chase on an abandoned industrial estate for this little film at school,” he says. “The car I was driving belonged to the father of a friend and I crashed it. It wasn’t badly damaged, but he was really pissed off, and I ended up buying the car.”

A few years later, while shooting a German film, he and a co-star were driving a Porsche on the autobahn, in the middle of the night, completely starkers. “The scene was the upshot of a silly bet between these two boys,” says Brühl. “We had to turn around at a gas station and the camera was hidden from view so, from the outside, all you could see was two naked guys in a Porsche. I will never forget the faces of the staff.”

He bought his first new car — an Audi A3 — aged 24, on the back of the success of the German film Good Bye, Lenin!, his first starring role, and soon afterwards was sponsored by Audi. He’s been given a new Audi most years since: currently an A7. He and his girlfriend, Felicitas Rombold, a psychologist, were recently taken to the Berlin International Film Festival in a driverless Audi A8, which he says was “really freaky”.

He owns two classics: an orange 1973 Peugeot 304 convertible and a 1966 Alfa Romeo Giulia. “I love The Italian Job and old Italian gangster movies, in which the Giulia was typically a police car. It’s sweet if you think of it now — you really couldn’t chase anyone in that car.”

Daniel Brühl: My life in cars