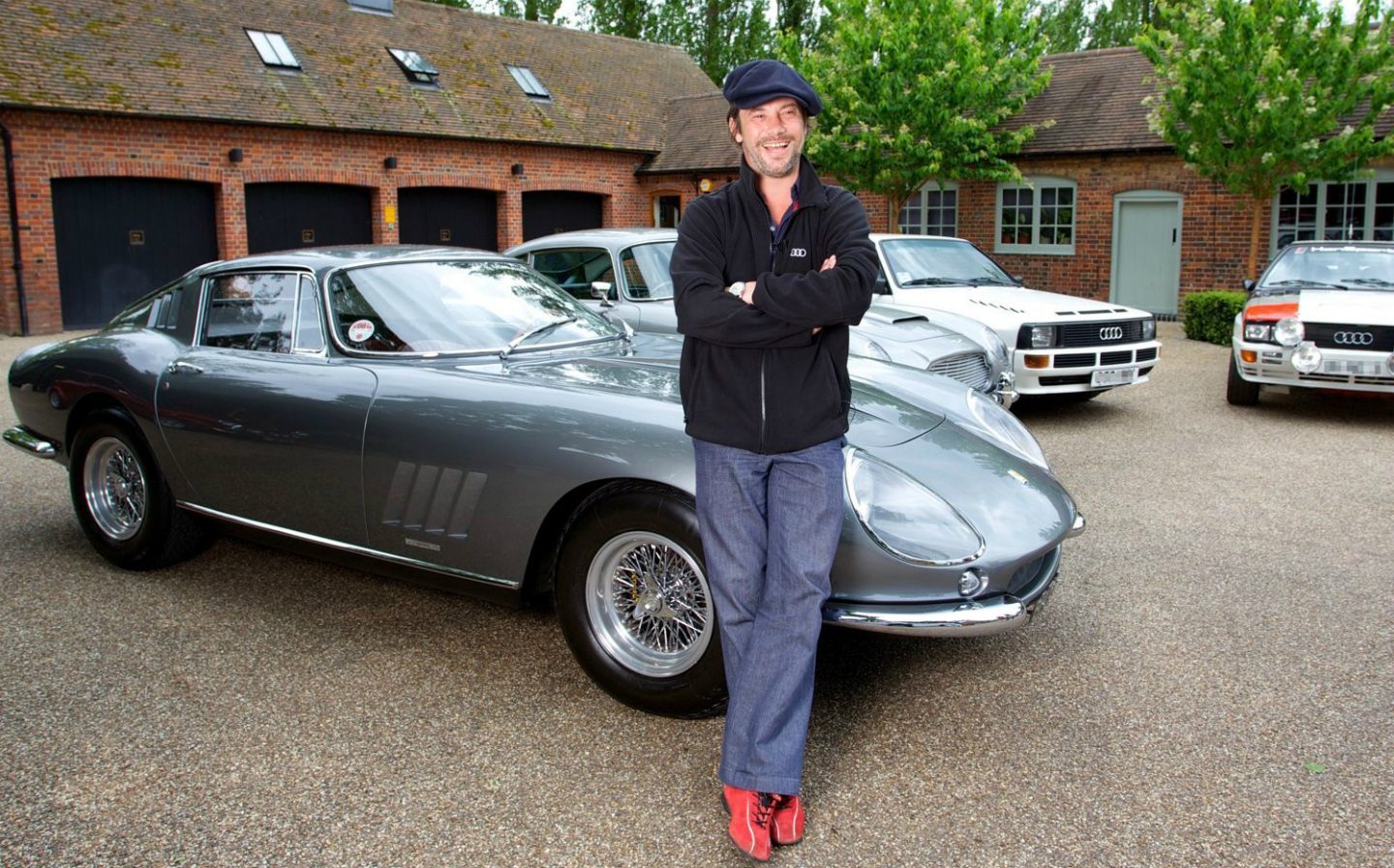 JAY KAY loves cars. The singer and front man of Jamiroquai is rarely happier than when he’s breathing in the smell of freshly burned Castrol oil, stroking the creases in ageing leather seats or listening to the sound of a finely tuned V12 Ferrari engine stretch its legs on one of his favourite roads.

He has owned, at times, 100 of the world’s most desirable and valuable cars. But it was bureaucracy that got him hooked on classic cars.

“I was about 21 when I got my driving licence and I couldn’t really get insurance on a modern car. So I thought, ‘I’ll get a classic.’”

That classic turned out to be a “little white, 22,000 mile BMW 1602. It went off to a couple of the band members, who sort of mistreated her, but I bought it back from the didgeridoo player when he left the band.”

Kay still has it, at a lockup in London. But he sheepishly admits visits are few and far between, these days. Not only has the 47-year old amassed a collection of rare cars which demand his attention, and qualified for a helicopter pilot’s licence, but he’s now married, and a father to two young girls, Carla and Tallulah.

In 2007, Kay saw his wife to be, Maria, from the back of a taxi, as he passed through central London, and recognised her “…from a little skirmish we’d had abroad years previously.”

Settling down wasn’t something many fans thought the ‘Cat in the Hat’ would ever do. His reputation as a party animal was the stuff of legend. “I can party harder than anyone, leave ’em on the floor,” he has boasted. But by the time he’d reached 45, all thoughts were on impending fatherhood.

“I was a bit of a naughty boy. I managed to drive from Rome to Calais in 13 hours”

His love for cars stems from being on the road from a young age, with his mother, the singer Karen Kay. “She had a Triumph Herald 1360 – a ‘Gerald’ – and I was always in the back of that, through the ‘70s. I remember she had some digs once, and there was a guy who had a ’73 Aston Martin V8 and I was just stunned by that. From then on, that was my thing.”

After the BMW came a classic Mercedes he bought from Jasper Conran. As he describes it, it becomes clear you’re talking to a petrol head; the terminology is the stuff of classic car magazines and owners clubs.

“It was a six-cylinder 280 SE, stack-headlight Mercedes. We had a gig, I think, at Leeds University, so I piled the band in the back of it and we went up to the gig. They’d had a few, and after parking it round the back I realised it probably wasn’t in the best spot, so I sat on the wall, watching it all the time, in case anyone took the three-pointed star off it. I got away with it.”

He agrees that he lives and breathes cars. He can recall number plates of cars he has owned. And where many successful individuals employ specialists to run their collection and and hunt down cars, Kay does it all himself, reading car magazines religiously.

His advice to anyone buying a classic car is choose a car that is has a reputation as being great to drive. Such as his pair of Porsche 911 2.7 RS models, one in Lightweight trim and the other in Touring spec.

Kay laments the days of empty Italian auto stradas. When he owned his Ferrari Enzo, he was “a bit of a naughty boy. I managed to drive from Rome to Calais [over 1000 miles] in 13 hours. It’s not doable any more.”

Which does he prefer? Classics or modern motors? “The Sixties Ferraris will be something I’ll always be into,” says Kay. He owns a Ferrari 365 GT4 Berlinetta Boxer – “the best in the world” – but is increasingly fond of the cars coming off the production lines today.

“I’m tucking away stuff like the [Mercedes-AMG] SLS gullwing, Porsche 911 [GT3] RS 4-litre and stuff where there has been only a limited production run.”

He refers to other limited-edition cars like the Ferrari Enzo, La Ferrari, McLaren 675LT, Mercedes-AMG GTR and Porsche 918 Spyder. Yet he admits there’s a slight discomfort around this: “Part of the difficulty now is that people don’t want to drive the cars, and it becomes a bit speculative.”

Does he worry about younger people not getting into cars, or being able to afford them?

“I think youngsters want different things [from cars]. They want gadgets. Performance takes a back seat.”

One car in particular took a long time to track down. It was a short-wheelbase Audi Quattro Sport, bought five years ago. Just over 200 were made, to help Audi win in the World Rally Championship, and around 164 were sold to private individuals.

He has owned Audi RS models since the original RS4. “The first RS4 was a revelation. But when I first drove the R8, the first V8 with a manual gearbox, I thought it was unreal! When you compared it to the Ford GT I had, Audi put the thought and build quality into it. It’s when Mercedes went wrong and BMW build quality lost what it had.”

After taking a seven-year break from the music business, he returned to the studio this year, releasing a new Jamiroquai album, Automaton. Critically acclaimed, the same-titled single has had over 10m views on YouTube. But a prolapsed disc in his back, still smarting when we meet, has meant that live shows had to be postponed.

It was the success of his debut album, Emergency On Planet Earth, that allowed him to start living life in the fast lane. His latest plaything, a La Ferrari, recently attracted the wrong sort of attention, after his habitual Sunday morning drive to London.

“I was coming back and there was a plain-clothes [police] car and I think they tried to egg me on. But I knew, and later on they gave me a little wave, like ‘Well done for not taking the bait’ because when you’re talking about cars like that, you can accelerate to 125mph in what, seven seconds?”

Kay owns a Porsche 918 Spyder, a supercar that uses hybrid technology. He sympathises for car makers that find themselves in the awkward position of having sold cars for their power and performance, and are now scrambling to switch the message to the environment and sustainability.

With so many cars at his disposal, is it possible to pick a favourite? “I have a little Porsche 911 S, in Rolls-Royce royal blue, and it’s a lovely, pure Porsche to drive. It’s got such charm. I like cars that transport you back to their time. This one was 1968; if it was good enough for Steve McQueen, it’s good enough for me.”

Jay Kay: my life in cars