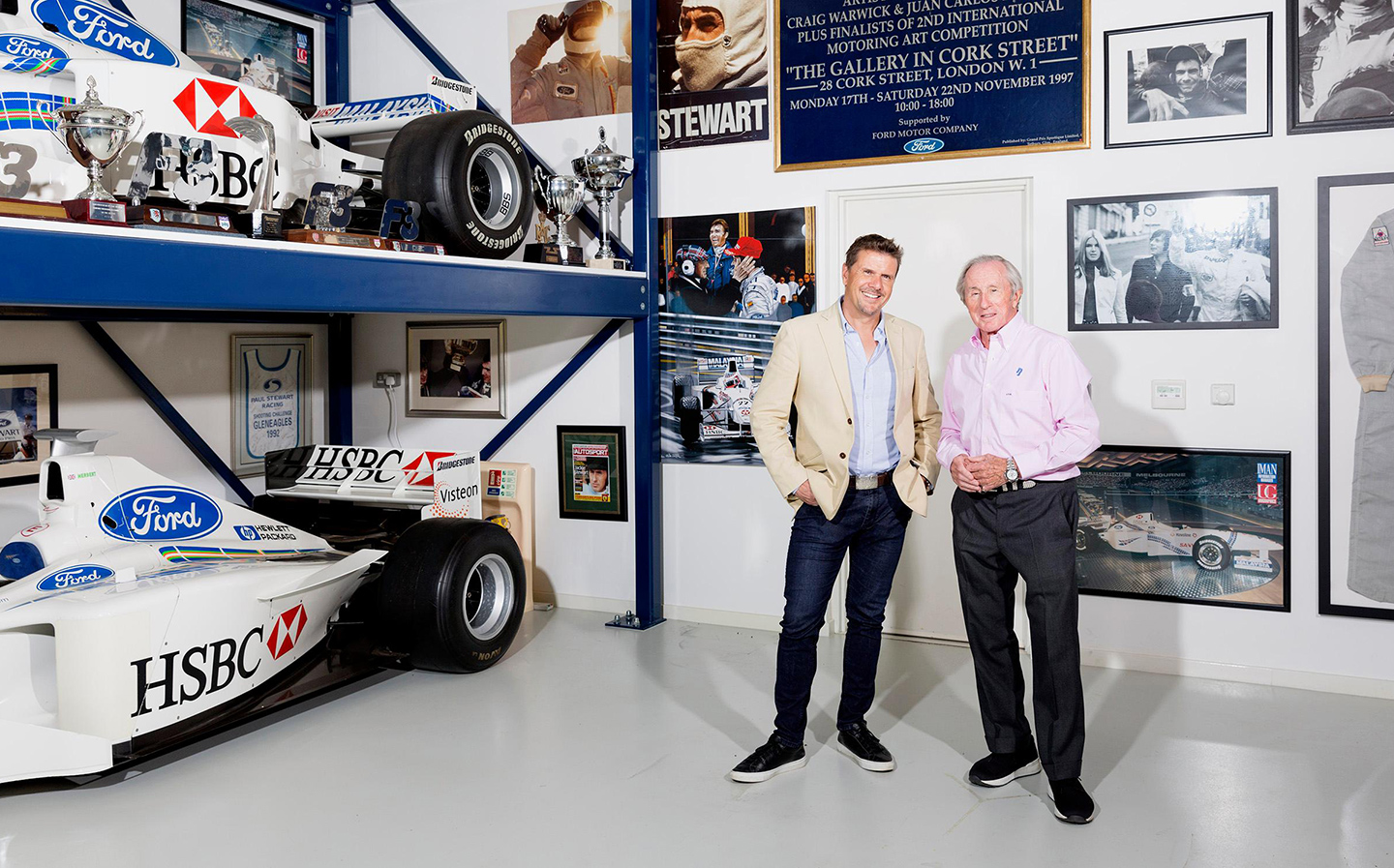 Jackie
I got married in 1962, the same year that I started racing. My wife, Helen, and I decided to wait a couple of years before we had kids, just so I could try and get a few quid in the bank. Our eldest, Paul, came along in 1965 and Mark in ’68. I had my first big accident in 1966 and I’m pretty sure that’s why we only had the two kids. I started to wonder what it was like for a family to lose a father. I hated the idea of not being there for the people I loved. As we sit here today, that might sound melodramatic, but if you were racing cars in the late 1960s, you had a pretty good chance of getting killed [between 1966 and 1970, 18 Formula One drivers lost their lives].

I lost a dear friend in 1970, Jochen Rindt. He crashed and I was with him when he died. They took him to hospital, but I knew it was too late. Just over half an hour later, I was in my car and put in the fastest lap I had ever done at Monza. This is going to sound crazy, but when I was racing, it was a case of “visor goes down, lights go out”. I’m not saying I’m proud of that, but when you get inside the car, it consumes you. You shut everything else out of your mind.After I came into the pits, I burst into tears. My friend was dead.

Not long after Jochen, I lost another great friend, Jo Bonnier. The kids at school — using childhood logic — thought that all racing drivers died. It was part of the job. I tried not to let it affect me, but I know that things like that used to hit Helen hard. Back then, it was very tough on the wives and girlfriends. Tougher than it was for the drivers. When a driver was killed, it was the other wives and girlfriends who flocked round to try to help the family deal with the tragedy.

When I retired in 1973, I think my decision was driven by the desire to spend more time with my family. When Mark and Paul were babies, I was away all the time and never even changed a nappy. I wanted to see them grow up, be part of their lives. And be there for Helen, too.

Because of what my sport has given me, I consider us to be a very fortunate family. So many wonderful things have happened to us. Even after I finished racing, I managed to have a successful career that has kept me close to the sport. Helen and I have become grandparents. Paul managed his own motor racing team. Mark’s a producer and his films have won all sorts of awards.

Sadly, like all families, there have been ups and downs. I’ve had cancer twice, Helen’s had breast cancer and Paul’s had cancer. As a result of that, I get the whole family checked out every year. It was one of these check-ups that alerted us to Helen’s frontal-lobe dementia. Up until then, there had been a few strange episodes, but nothing that would make you think there was anything seriously wrong.

That was in 2016 and we now have a team of eight neuro nurses looking after Helen 24 hours a day. Again, I’m fortunate enough to be able to do this, but most families aren’t so lucky. That’s why I’ve started the charity Race Against Dementia. The medical world has successfully challenged cancer, HIV … isn’t it about time we tackled this? An illness that costs the UK twice as much as cancer and heart disease combined.

Whenever I see Mark or Paul, there is sadness, but there is also a tremendous amount of love. As a family, we are closer than we’ve ever been and we’re all pulling together to make sure Helen’s days are filled with happiness.

Mark
As a kid, I knew my father drove cars for a living, but I’m glad I was too young to understand what that really meant. For me and my brother, the most exciting things were travelling on aeroplanes and bouncing on the fancy hotel beds. What I didn’t know was that, while we were enjoying ourselves, Dad was watching his friends get killed.

As I got a bit older, I began to understand the other side of motor racing. Mum and Dad tried to hide it from us, but I saw how much it affected them. When you look at the sport today, it’s easy to forget how dangerous it was back then. If a fuel tank burst into flames and your overalls were on fire, it was just another day at the office.

Did I ever want to follow in my father’s footsteps? My brother did, and I was asked the question many, many times when I was a young man. If I’m being honest, I think that the deaths my father saw affected me, too. Of course, there was the glamour. George Harrison was a good friend of my father’s and he became Uncle George to us. I got to meet four US presidents — Ford, Carter, Bush Sr and Clinton. But, through my dad’s eyes, I’d seen the reality of motor racing.

Both my dad and I suffer from severe dyslexia. At school, I was really struggling, so Dad took me to have all these tests. At the end, they said I was dyslexic and Dad remarked that he’d had the same problems when he was at school. People making you feel stupid, calling you an idiot. Dad took the test and found out he was dyslexic, too. I think we were both relieved we weren’t idiots.

Dad has undoubtedly dealt with a lot over the years, but it was always my mother who was the linchpin of the Stewart family. She was the glue that held us all together. When we initially found out she had dementia, there was a very low period because none of us knew how to deal with it. But then I saw a change in Dad — he attacked it like he was back on the track. Dementia is the opponent and he’s determined to beat it.

Mum’s in a good place right now. We have a laugh when we’re all together, she seems happy … and she’s still my mum. She’s not able to take care of family business like she used to, which means that Dad, my brother and I have had to take over. Typical, eh? It takes three men to do a woman’s job.

Spitfire, a documentary co-produced by Mark Stewart, is out on DVD and Blu-ray. For more information about Race Against Dementia, visit raceagainstdementia.com