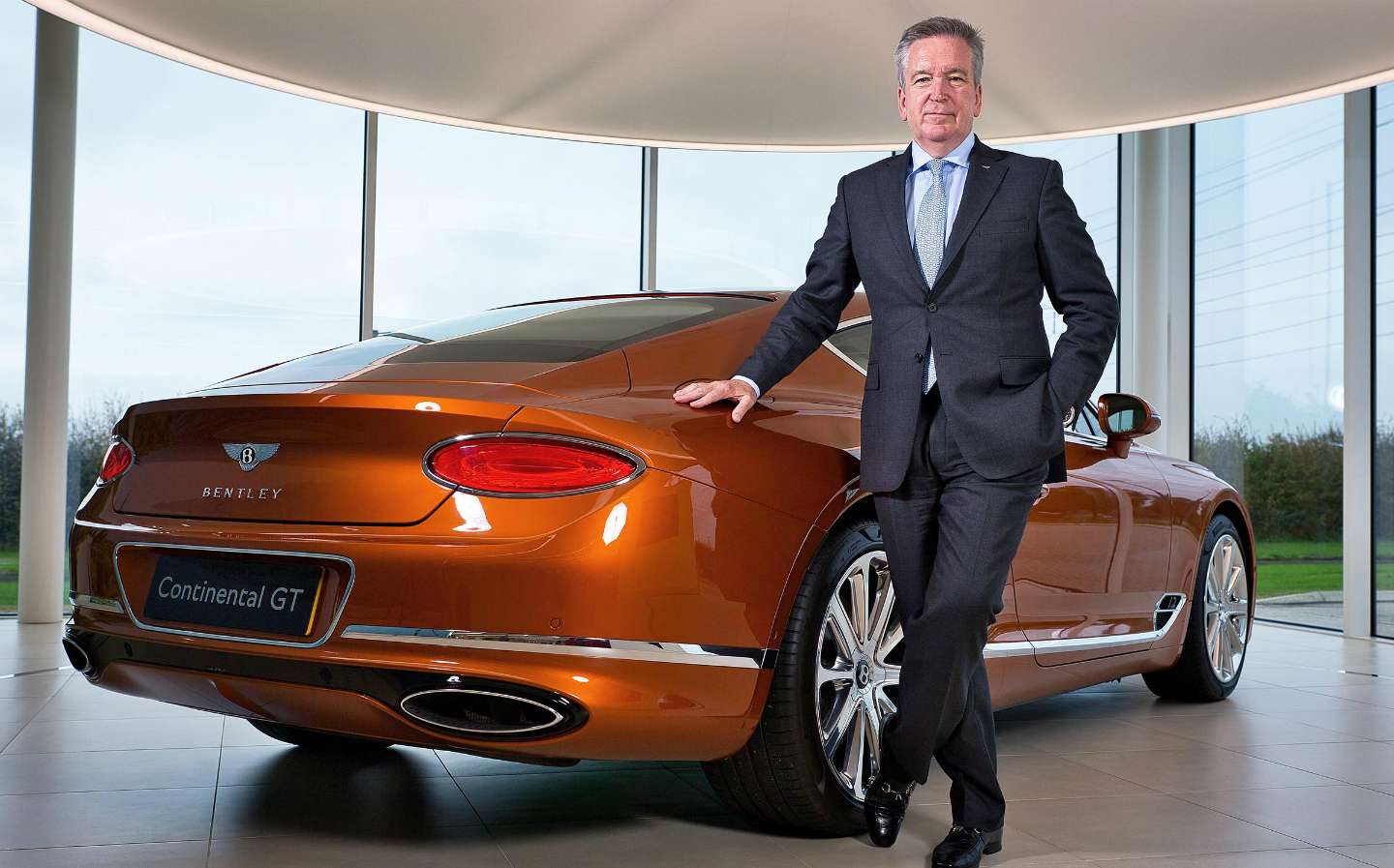 ADRIAN Hallmark is swallowed by cream leather as the colossal Bentley pulls away from the kerb and begins to purr around Mayfair. Few heads turn: luxury cars such as the white 4×4 are not uncommon in this exclusive corner of London — except that they are usually accompanied by the deep roar of a turbocharged engine rather than the almost imperceptible hum of an electric motor.

Bentley, among the thirstiest of the gas guzzlers, is gradually going electric. The painful shift is being led by Hallmark, its new chief executive.

The illuminated dashboard of the Bentayga hybrid sports utility vehicle — a hulking 2½ tons of steel and glass — shows the scale of the challenge. With a range of just 31 miles in pure electric mode, the battery’s charge is rapidly ebbing away.

“The problem, especially for SUVs, is that they are wide, tall, and have very upright aerodynamics,” explains Hallmark in a faint Midlands burr. “That is exponentially painful for the battery.”

One suspects that the 56-year-old — dapper, in a dark suit and tie, with neatly brushed greying hair — would not be starting with the Bentayga if he had his way. It is the Crewe-based car maker’s first attempt at an SUV, and pretty it is not. Would the new boss have signed off on the brute?

Hallmark hesitates. “That’s a difficult one,” he says. “I can’t really answer the question because it’s done.”

He adds: “All I would say is that it is the highest-selling Bentley we have ever produced. The success of this car is undoubted, but could it be more appealing and more successful if the design was less polarising? Absolutely.”

It is not quite a Gerald Ratner moment, but it is far from a ringing endorsement.

There is a sense that things are going to be different at Bentley under Hallmark. The son of factory workers from Shropshire has climbed from apprentice to run the most blue-blooded of car companies.

The success of the Bentley Bentayga is undoubted, but could it be more successful if the designw as less polarising?

He joined in February from Jaguar Land Rover, where as strategy director, he helped to transform the Midlands car maker from financial basket case to — until recently — a global success story.

Having spent some of his earlier career at Bentley, he was persuaded to return to right a listing ship. Once a dependable source of profits for German owner, Volkswagen, the luxury car maker has been bleeding cash. It racked up losses of €137m (£124m) between January and September, against a €31m profit a year earlier.

Hallmark says the timing of new models and a huge investment in electric vehicles are to blame for the losses, which he calls a blip: “We have made money for 13 of the past 15 years.”

A slowdown in China, where President Xi Jinping is reining in ostentatious displays of wealth, has also dented sales. They were down 11% in 2017, and by a further 10% in the first nine months of 2018.

All this is set against the backdrop of a UK car industry in free fall. Jaguar is axing thousands of jobs, putting staff on three-day weeks and mulling temporary factory closures. Hallmark’s former employer blames Brexit, weak consumer confidence and slumping demand for diesel models for its plunging sales.

Nonetheless, Hallmark is sanguine. “They have got flexibility. I don’t want to talk about JLR too much — speak to Ralf [Speth, the chief executive],” he says. “It’s just the speed of change that’s causing them a bit of stress. The business will go on and be strong.

“It’s been the end of the car market every time there has been a recession. We will adapt. It’s Brexit today; it was Lehman [Brothers] 10 years ago.”

Hallmark arrived in the car business after a few false starts. His father built chemical containers and his mother made shoes; he left school at 15 to do an apprenticeship in fabrication. He swapped to mechanical engineering and ended up in the nuclear industry. Hallmark still has the blueprints for a shock absorber for nuclear power stations he designed. But, hungry for action, he quit.

“I hated it. It was so boring and the company was so slow — and I did not see a future for engineering.” He joined a Volvo dealership where he had worked part-time, and shone. By 24, he was running a team of 42 staff turning over £6m.

When he spotted a job with Porsche, advertised in a trade magazine, Hallmark swallowed a big pay cut to join. Within six years he had been promoted three times.

It’s been the end of the car market every time there has been a recession. We will adapt

His first stint at Bentley came in 1999, a year after VW bought the company from Vickers. Hallmark, then 36, was made board member for sales and marketing. He knew Bentley had to differentiate itself from Rolls-Royce. Its former stablemate had been bought by BMW and he knew it would set about building “the biggest, most expensive car in the world”.

Hallmark started off by tearing up VW’s business plan and coming up with an alternative: returning the company to its roots and focusing on launching a 200mph GT luxury coupé. The plan was to hike sales from a paltry 850 a year to 10,000, while increasing prices by 50%.

It worked. In the first 3½ years of the GT Continental, from 2003 to 2006, Bentley sold as many cars as it had in total since being founded in 1919. “It was like Yellowstone Park volcano ready to burst, and we tapped into it.”

Then came spells running VW’s businesses in America and Asia. “The jet lag nearly killed me,” admits Hallmark. The final straw came when he was asked to run VW in China. Unwilling to uproot his family again, he quit to join the ailing Swedish car maker Saab in 2010, as the financial crisis was choking the industry. Less than a year later, he was at JLR.

As strategy director, he learnt “more than in any three years of my life”. Under its new owner, Tata, he helped the company expand by opening plants in China and Slovakia and launching bestsellers such as the F-Pace and Range Rover Evoque. It was the “perfect training” for running Bentley.

Hallmark rejoined Bentley for the challenge. “I was at that point where I’d got to run a small car company or go and do something absolutely different,” he says. “This was my dream job — and one other, which I won’t mention.”

Still, the challenges facing car makers are huge. Brexit threatens to disrupt complex supply chains. Building only 10,000 luxury cars a year with price tags of up to £290,000 means that Bentley will be hit less hard than its peers in a no-deal scenario. But even so, it threatens to impose considerable cost and complexity.

The Bentayga is built using the same basic skeleton, or platform, as Audi’s Q7, VW’s Touareg and the Porsche Cayenne — a common template. VW’s Bratislava plant builds the cars’ shells from aluminium and steel, before they are shipped to the ports of Liverpool and Southampton.

Bentley is considering pre-building components and looking at new supply routes to get the parts to its Pyms Lane factory, which built the Merlin engines that powered Spitfires in the Second World War. “We’ve done all the scenarios, we’ve got the plans,” says Hallmark.

Customers are desperate for a luxury electric product. There is a pent-up demand for pure-electric vehicles

Then there is the war against emissions. As a VW employee, the issue is particularly sensitive for Hallmark. He was at JLR when “dieselgate” — VW’s systematic cheating of emissions tests to make regulators think diesel cars were cleaner than they were — emerged in 2015.

Having spent much of his career at VW, starting as a regional manager for Porsche aged 26, he was “mortified”. “I could not believe the guys at the top could have possibly done it.”

“They are such obsessive perfectionists when it comes to technology. When I think of all the fights [where] I had to say [to managers], ‘Do we really need to spend this money to solve this small problem or could we be a bit more pragmatic?’, the answer was always: ‘Go for the highest technological solution.’ ”

The shockwaves from that crisis are upending the car market. Cities such as London and Paris are looking at banning diesel vehicles, and regulators are imposing emissions standards that reflect real-life driving. Hallmark says almost 40% of Bentley’s customers have considered buying an electric car recently — hence the haste of its electric push.

The high-end marque is investing heavily — and disproportionately — in electric power. All its models will have hybrid electric power by 2023. “Customers are desperate for a luxury electric product,” says Hallmark. “They want the same standard in the rest of the vehicle as they enjoy in current cars, but can’t find it. There is a pent-up demand for battery electric vehicles.”

The challenge for Bentley, whose flagship Mulsanne is powered by a 6.8-litre engine that manages about 12 miles to the gallon in cities, is greater than most.

For that reason, the Bentayga will, for the foreseeable future, remain limited to a hybrid, combining batteries and a petrol engine. The idea of lugging this huge lump around with batteries alone remains a distant dream, the boss admits.

“Until the battery power density goes up about 30%, you won’t see many long-range big SUVs. It will be the mid-to-late 2020s before that technology is affordable and industrialised.”

Despite the wait, Hallmark couldn’t be more excited. “The future is so much more exciting than the past. If I was back in my first big Porsche job, I think I would be beyond excited,” he says.

“I’m frustrated I’m at my age when all of this is about to kick off, because I’m not going to be there to live through the fundamental change. The potential is huge.”

The life of Adrian Hallmark

Working day
The boss of Bentley lives in The Mews, a luxury property in Nantwich which is owned by the company and is also a showroom and events venue. Adrian Hallmark drives the short distance to the company’s factory in Crewe, and typically works from 7.30am to 6.30pm. Four or five times a month he works till 10pm.

Downtime
Hallmark cycles for two hours twice during the week and once at weekends, and likes to read between 9pm and 10pm. He splits his time between Nantwich and a home in the French Alps, where his wife is based. He skis during winter weekends, and in spring and autumn rides bike trails.

This interview by John Collingridge originally appeared in The Sunday Times.