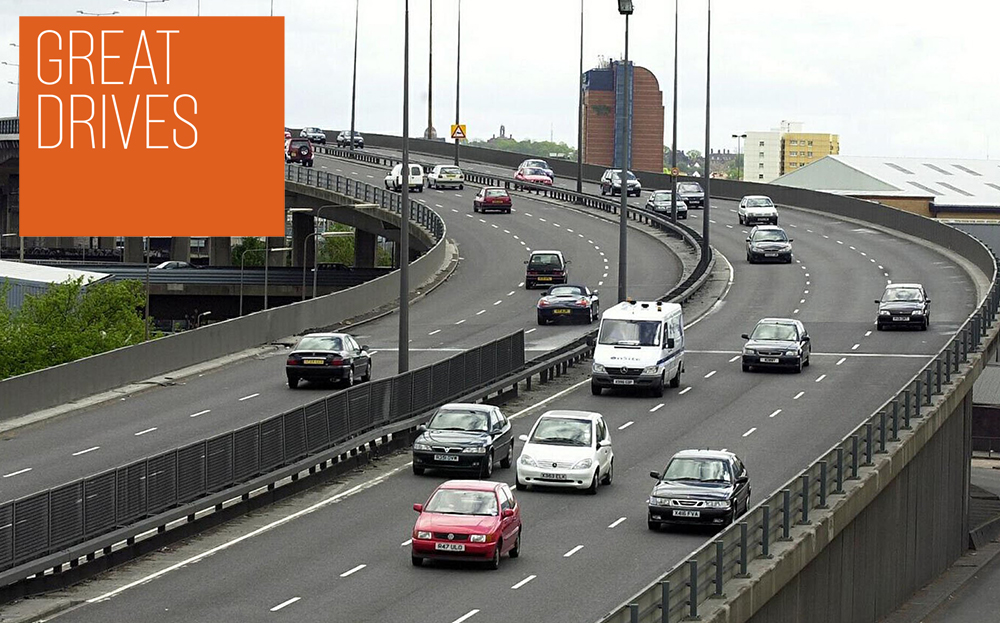 COMMUTERS WHO suffer it in rush hour will laugh bitterly, but if you want to get a sense of Britain’s capital from the road there are few better places to do it than the dreaded North Circular. Just pick your time with care.

Make no mistake: this is not a traditional driving road — or one for the faint-hearted. If you want to pull back the lid of your convertible and drink in the fresh air, look elsewhere. But if you want a nerve-jangling experience of the might of a great world city in all its brutal glory, there are few drives to beat it.

The North Circular forms an arch across the top of London. It runs through ancient woodland, carves through residential neighbourhoods and soars skywards on concrete flyovers.

Start at the Woolwich ferry terminal on the Thames, heading north towards Barking. Now called the A406, the road was part of a grand plan by the Greater London council to create a series of radial motorways within the city to ease congestion in the 1960s. Those plans were dropped in the 1970s and the road has remained in limbo since: part dual carriageway, part urban thoroughfare with speed limits of between 30mph and 50mph.

From Barking the road speeds up as it passes the junction for the M11 at Charlie Brown’s roundabout, named after a pub that was demolished to make way for it in the 1960s, then dives through the southern part of Epping Forest, 6,200 acres of ancient woods and marshland.

You emerge onto the Lea Valley viaduct. Built in the 1930s to protect the road from floods, this is one of the first highways to use reinforced concrete construction. It once featured vast pylons to boast of its modernity and smart, American-style concrete street lamps — both now long gone. Today, if you hit it late at night or early in the morning you can cruise at 50mph and imagine the optimism of its first travellers: this was to be the future of city transport. Glance to your left and you are treated to one of the best roadside views of London, from Canary Wharf to the City, with the Shard and the BT Tower in the distance.

Traffic builds as you crawl past Muswell Hill as lorries thunder by with their cargo from Felixstowe docks to the smart delis of west London. Hold your nerve as you mount the flyover that crosses the junction for the M1 spearing northwards out of town — the route Withnail & I took in their battered Jaguar to escape London. Crank up Jimi Hendrix’s version of All Along the Watchtower, as they did in the film.

Drive on past Brent Cross shopping centre and through the arches of the main railway line from Euston to Scotland and past the giant Wembley stadium arch. To your right you pass the Ace Cafe, which opened in 1938 and has been knocking out tea and fry-ups ever since. The bikers who swarm into its car park are a little older now than the clientele in its 1950s heyday, but not much else has changed.

If you want a detour before you reach the cafe, turn south at the A404 and wiggle past the Edwardian terraces before emerging in front of the spectacular Shri Swaminarayan Mandir, the largest Hindu temple outside India, plonked surreally in the middle of Neasden.

After the A406 Hanger Lane gyratory system — once voted Britain’s scariest junction — you will be on slightly more peaceful territory. The final stretch passes through leafy inner suburbs then through Ealing Common.

It ends abruptly at Chiswick roundabout: carry on and you will no longer be on the North Circular but its duller sister, the South Circular. You have a choice: turn left to be injected into the heart of London along the A4, or right along the M4 to flee to the open roads and big skies of the countryside.

Car Something big and ugly so you are not bullied off the road. A Porsche Cayenne would do.

Sounds London Calling by the Clash and Jimi Hendrix’s All Along the Watchtower for the frantic start; the Kinks’s Waterloo Sunset towards the end.

Eat A fry-up at the Ace Cafe.