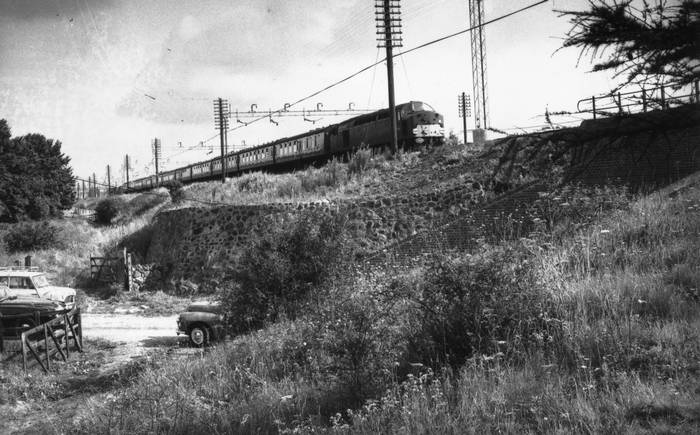 THREE YEARS ago, over a long lunch, the late train robber Bruce Reynolds told me the details of this route. “I found a series of doglegs to the north of Aylesbury, passing through farmland and little villages. Nice, quiet roads to drive along. I don’t imagine it’s changed that much.” Hasn’t changed that much, he meant, since the day he and 15 others robbed the Travelling Post Office from Glasgow and got away with £2.6m during the Great Train Robbery on August 8, 1963.

Most people will know of the robbery itself — how the gang stopped the train, beat the driver and made off with the cash. But their escape route is less well known. It starts at the Bridego Bridge, a spot just south of Leighton Buzzard where the train was held up, then heads west between the hedgerows for a short distance, past Rowden Farm (which had its telephone cut on the night) and then towards the village of Mentmore.

The whole area is lovely, on gently undulating B-roads, with just the odd humpback bridge to spin the stomach. The gang completed the 30-mile route to their hideout in less than 45 minutes, driving a convoy of army Land Rovers and a truck. You can retrace the route (possibly in an old Jaguar like the Mk 2 used by the gang to practise the drive) and unless you have loot to hide, take your time and soak up the picturesque villages and landscape that give no clue to the drama they witnessed 50 years ago.

Mentmore is a pleasing mixture of the medieval and the fanciful Victorian mock-Tudor, although it’s doubtful the robbers had much time to admire it. After a quick jink round the church, you leave Mentmore on a deceptively tight left-hand bend then another hard right-hander where you can almost hear the echo of tyre squeals from 1963.

My favourite section is after the village of Cublington, heading towards Whitchurch, where there are a few hundred yards on the A413 through the village. These few miles offer an unimpeded view to the left over the Vale of Aylesbury, the patchwork of fields pocketed with an autumn mist on my recent drive and the scattered copses crowned with gold and red as the leaves turned.

Watch out for the easily missed left turn at Quainton, signposted with a silhouette of a steam train, and from the junction onwards you’ll see a smattering of “Stop HS2” signs. The line is projected to run just south of the village, right past the Buckinghamshire Railway Centre. This is a working steam railway and museum, complete with a country station straight out of Miss Marple.

About time for a bite to eat. Follow the sign for the Hundred as you drive through Ashendon. A short way up a dead-end road you’ll find the pub, which has variously been called the Red Lion and the Gatehouse. Local legend has it that, in 1963, when in its Red Lion incarnation, Reynolds, Roy James and some of the others would pop in for a pint and sit on the long-departed sofa, arguing the toss about the best route to get away with their swag. Now it is run by a chef who used to work at St John, a trendy London restaurant, and offers robust British dishes — rabbit, oxtongue, mallard.

The final turns take you to the village of Brill, where Leatherslade Farm, the gang’s hideout, sits due south. The farm is privately owned and train robbery groupies aren’t really welcome, but there is a public footpath between Brill and Little London that takes you past the unprepossessing buildings. I’d head for Brill’s windmill, for a last look over the Bucks countryside and for the Pheasant pub, which does a very decent pie of the day. I am sure Reynolds would have approved — after all, he was brought down by leaving his fingerprints on a bottle of ketchup at Leatherslade.

Rob Ryan is the author of Signal Red (Headline), a novel about the theft 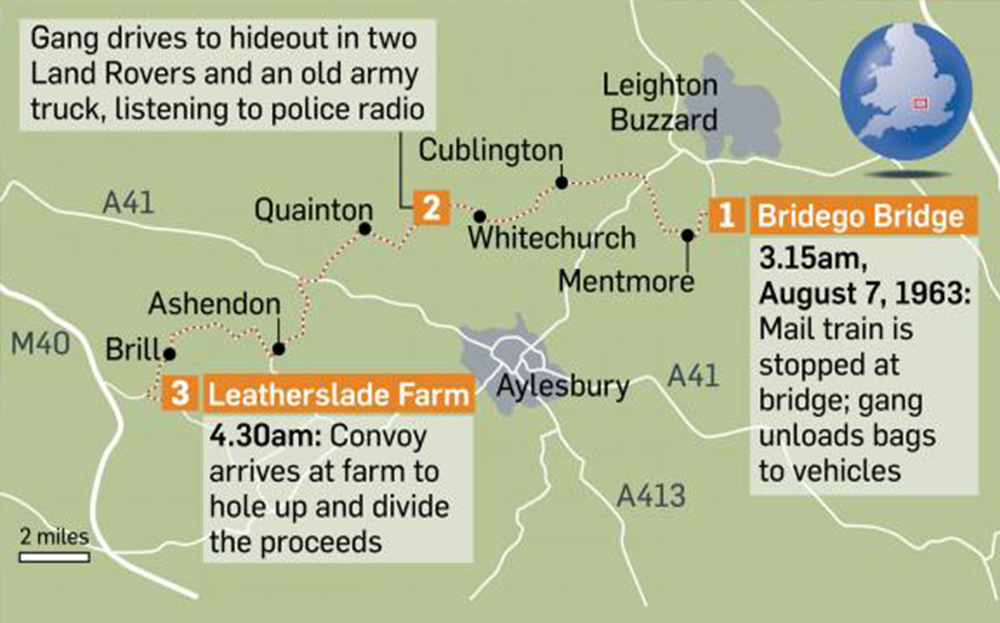 The vehicle: A Mk 2 Jaguar, as used to scout the route.
(Search for used Jaguar on driving.co.uk)

The soundtrack: Tony Bennett. Reynolds claimed that on the way back from Bridego Bridge the robbers all sang along to The Good Life.

The companion: Mandy Rice-Davies circa 1963 would look glam in a Jag. She’d need to bring the OS Landranger 165 map.