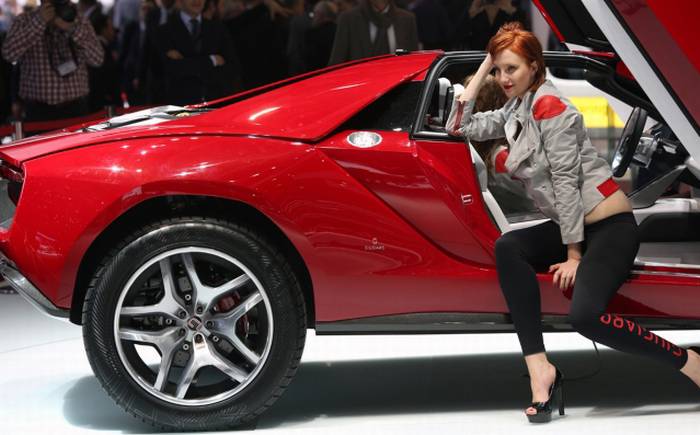 If news of Citroën’s new C4 and Renault’s updated Scenic being unveiled at the Geneva motor show left you a little flat, then here’s some real automotive adrenalin. Some of the biggest stars of this year’s show will never go on sale. They only exist to look spectacular and float some wacky ideas. You’ll see parts of their design on cars of the future but these models are here today and never to be seen on the road. This is their 15 minutes of fame.

Switzerland might host one of the world’s biggest motor shows but its car industry is virtually non-existent. The few manufacturers there are seem to have turned loopy in their isolation and none more so than Rinspeed.
In previous years it has shown an underwater convertible in which passengers had to wear breathing apparatus, a car made from bamboo and another with a completely transparent body. This year it unveiled a magic bus.
The internet-connected electric box is at the heart of Rinspeed’s vision of apparent anarchy. Instead of owning cars, people of the future will locate a spare magic bus (officially called MicroMax) with their smartphone. If there’s one passing by, then they can hop on. If not, they can find an unused vehicle and drive it to their destination, stopping off to pick up anyone going the same way. There’s no chance that it will go into production but its internet technology has already started to appear in some mainstream vehicles.

Do you shop at Louis Vuitton and go on holiday to Dubai? Then you probably know all about Hamann whose creations make the jewellery department at Harrods seem a haven of Quaker simplicity. Underneath this blinding pink marshmallow is the new Range Rover, widened by 80mm with an ostentatious carbon fibre bodykit. With lowered suspension, bigger wheels and a tuned engine, there’s no pretence at finesse. Just be grateful that the interior is out of view. Buyers are able to continue the “individual approach” inside with monogrammed door sills and floor mats, as well as bespoke seats and a dashboard clothed from a range of leather, aluminium, steel and carbon. Designed as a concept to show how potential buyers can modify the new British 4×4, Hamann knows that some people will pay for this treatment.

From the company that has designed dozens of Ferraris, from the Enzo to the Modena, comes the Sergio. Pininfarina’s concept cars are usually a huge trade advertisement showing manufacturers what the Italian styling studio can do for them, in the hope of winning a commission to design their next car.
This year, things are a little different. This two-seat, windscreen-less roadster is also a tribute to the company’s former manager, Sergio Pininfarina, who died last summer. It is said to be inspired by some of his best-known designs, such as the shark nose from the Ferrari Daytona, and the flowing lines of the Ferrari 250GT.
The Sergio is based on the Ferrari 458 Italia and the company says that it could ‒ in theory ‒ be produced. If you have to ask the price, you certainly couldn’t afford it.

This electric three-wheeled motortrike is Toyota’s vision of the future. It appears to be a dismal vision: instead of flying cars, hover bikes and robot-controlled-shuttles we have a plastic toy that looks as if it’s always on the verge of falling over.
That initial verdict might just be a little unfair, though. The bike’s electric motor gives a 30-mile range and promises instant acceleration for darting through traffic, while the leaning system, controlled by a complicated system of computers, gyroscopes and advanced suspension, allows the rider and a pillion passenger to power through corners.
Because there’s no need to get their knee down, the cabin is fully enclosed, allowing owners to weave smugly through traffic jams without raindrops dripping from their nose.

Controversy over the Provo’s terrorist-related name meant that little else has been said about this Kia hatchback. The concept indicates that the Korean company is getting ready to launch a car to take on the Mini.
The 200bhp car also has a hybrid system that can provide an extra 40bhp during acceleration. The looks match the searing pace with tiny LED headlights surrounded by sharp styling, a clamshell roof and bright orange sections making it seem as dangerous as a poison arrow frog, despite the green body colour being reminiscent of an Armitage Shanks bathroom suite circa 1975.
Unlike some other concepts, this car is likely to go into production, so the question is whether Kia will keep its nerve and stick with the design and powerful engine. Probably best to change the name, though.

Plus: five more concepts begging to be built

The designer said that he began the project by asking: “What is missing from the world of cars today?” The answer, apparently, is a Lamborghini-based mid-engined SUV with adjustable suspension that can be lowered for track use or raised for speed bumps. With scissor doors and a white leather interior too.

Built for a wealthy collector, presumably with a supercar habit and a labrador, this Bertone creation is based on a V12-engined Aston Martin Rapide that has been stretched and made into an estate car. It looks fantastic but if they wanted lots of space, a Volvo would probably have been better.

A carbon fibre roadster, designed with a ruler and powered by a Maserati V8 engine, the Sbarro Eight has been built to show off the latest in dashboard technology. The car has a touchscreen that shows films, reads audio books and can connect with all manner of smartphones. You could fit it with a cassette player and we would still love it, though.

Looking like a startled bunny rabbit, the CA-MiEV is a futuristic electric people-carrier that can travel for 185 miles on a single charge of its batteries. Pull out your smartphone and you can unlock the car or set the onboard temperature with a swipe of your finger.

While not technically a concept car, Koenigsegg is only building a single Hundra to celebrate the company’s production of 100 cars in the last ten years. Those streaks across the body are the most expensive go-faster stripes you can get, laid on in 24-carat gold leaf. It’ll all go past in a blur, though thanks to the 1,040bhp V8 engine and lightweight carbon fibre bodywork.