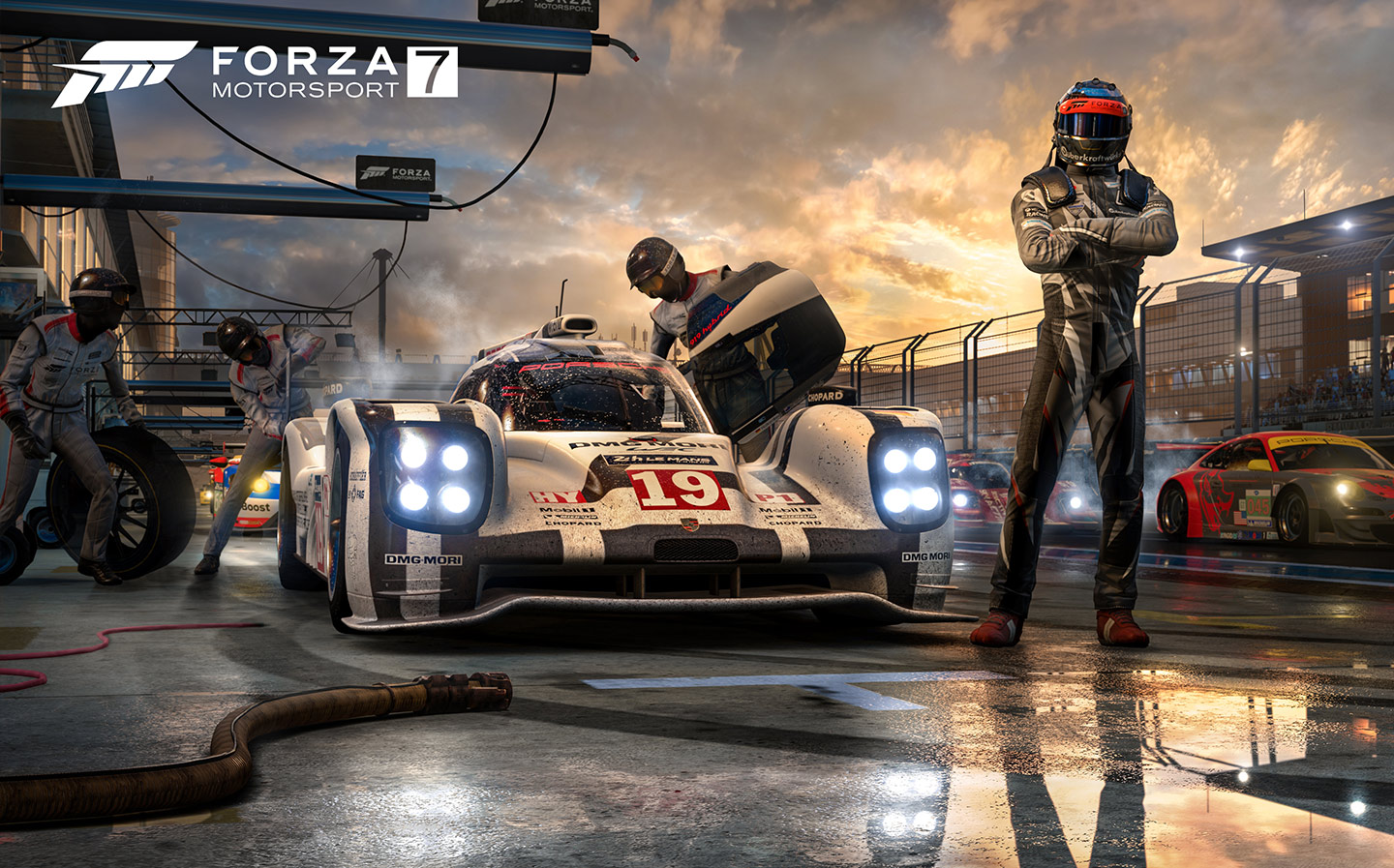 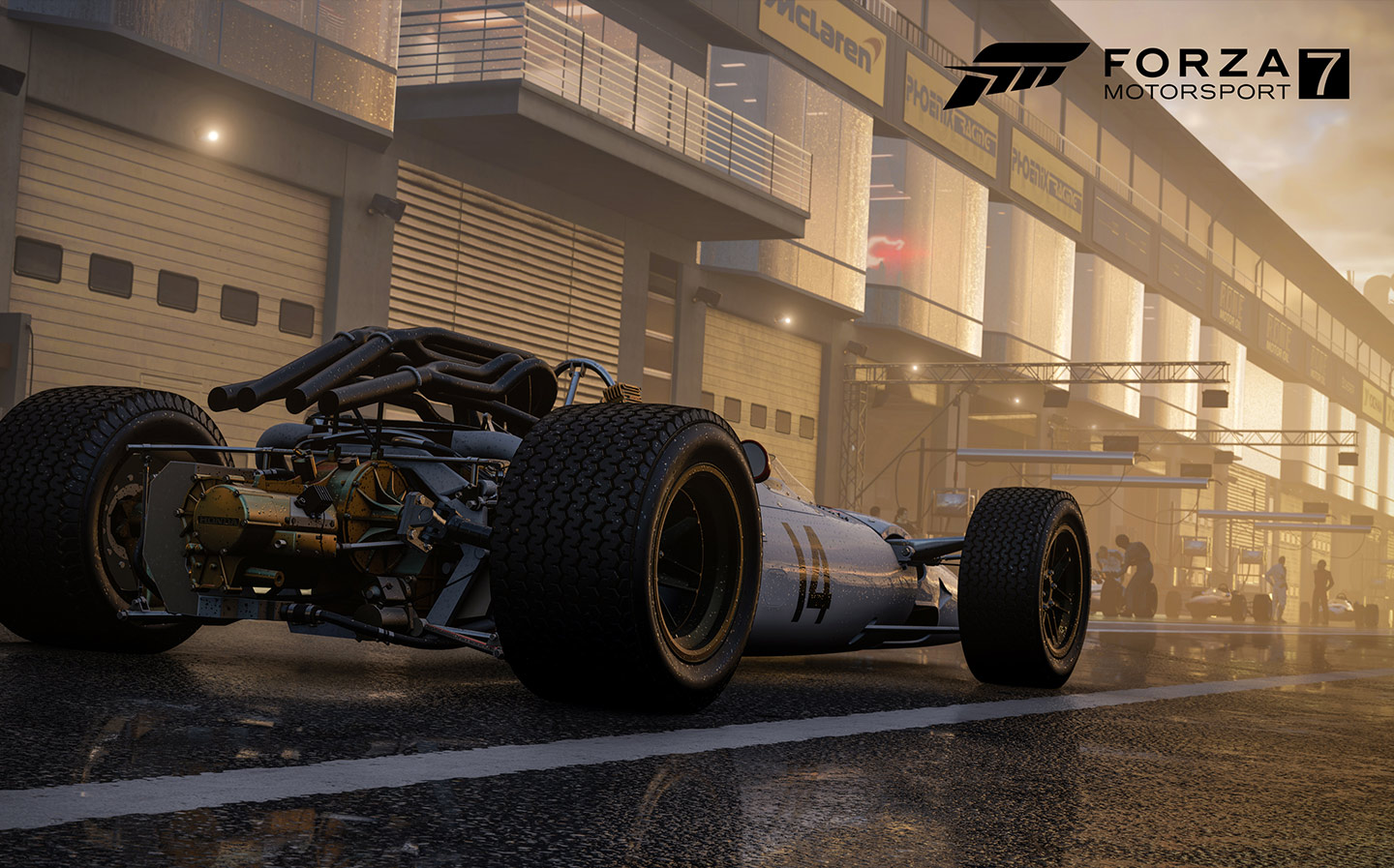 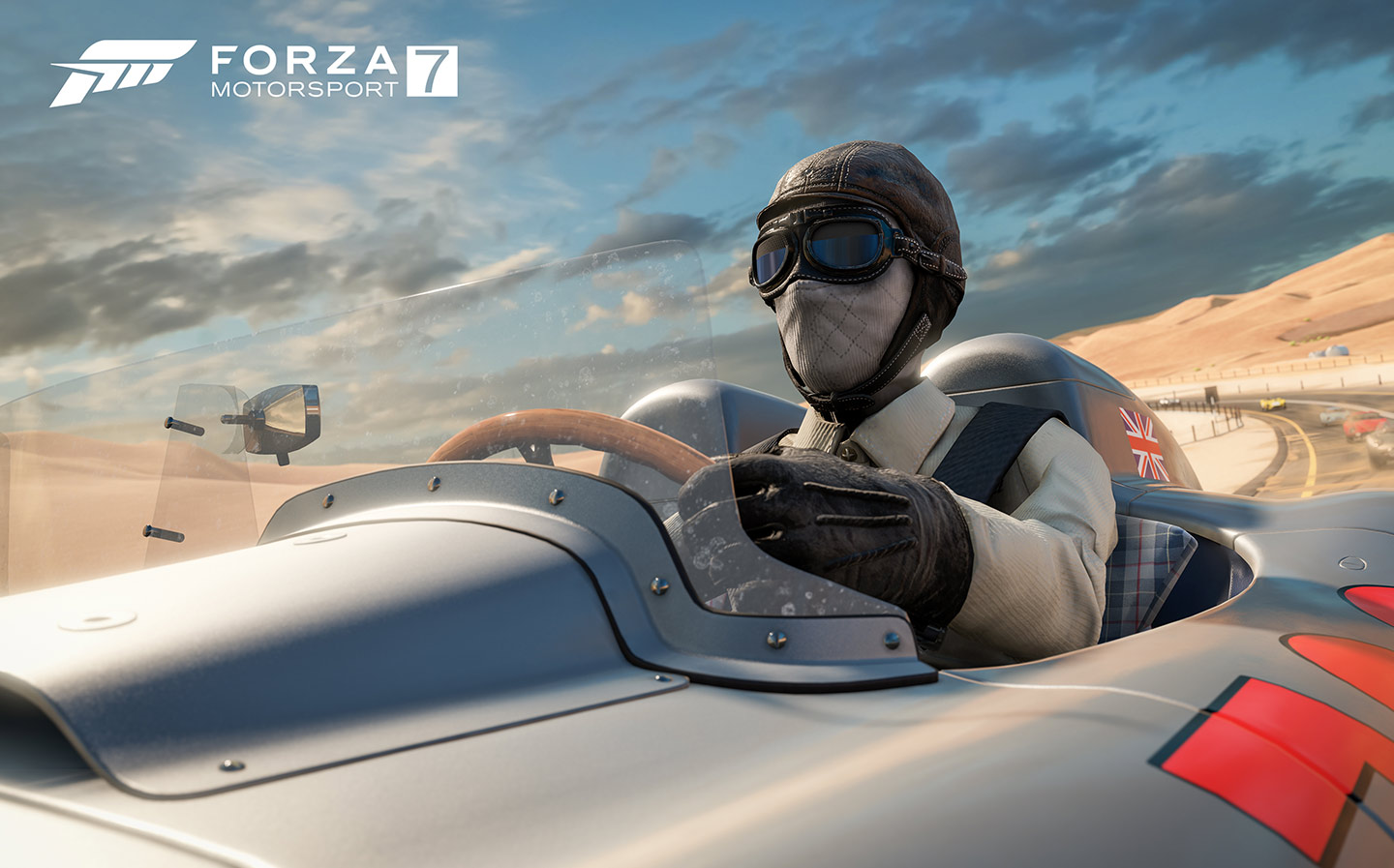 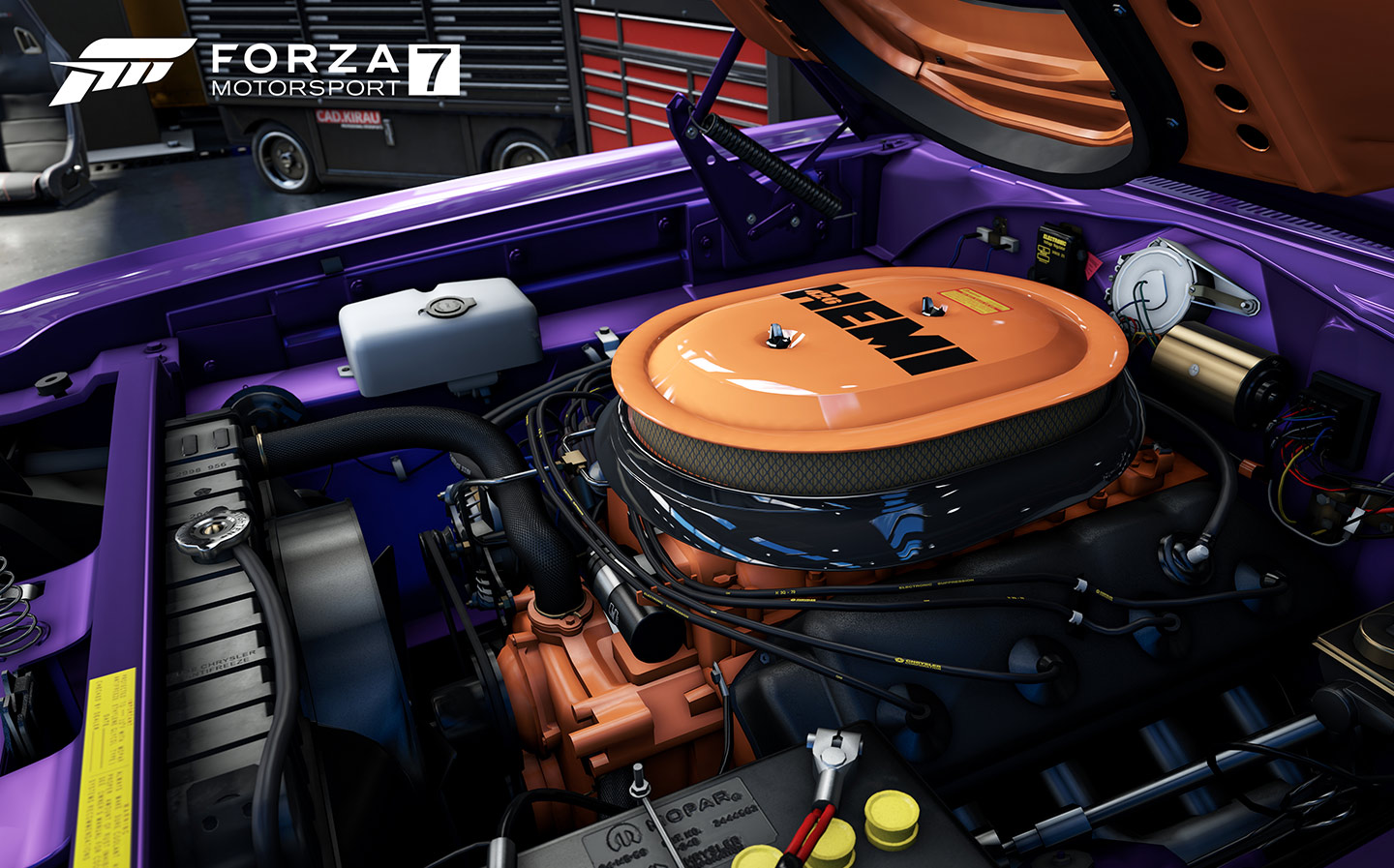 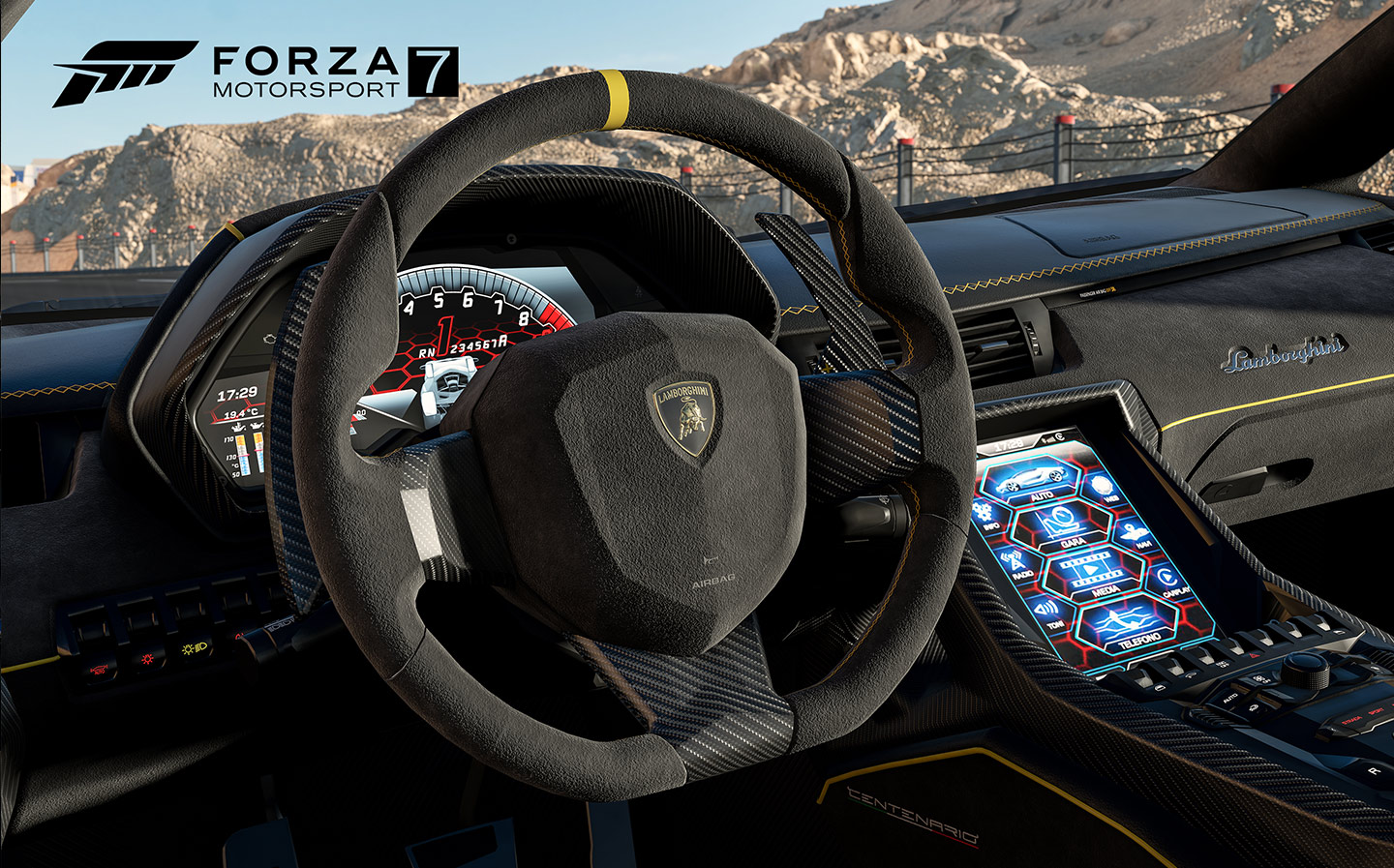 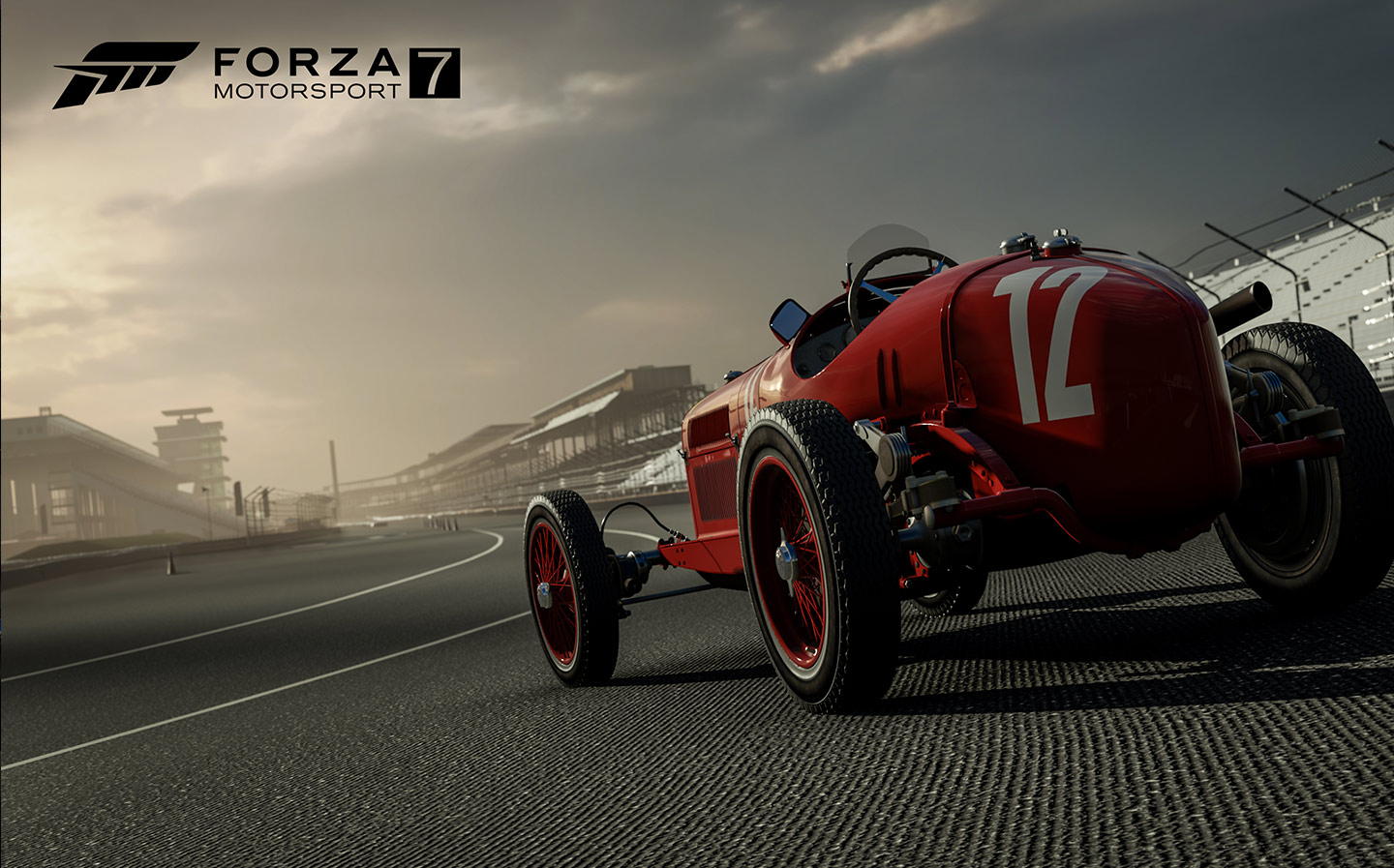 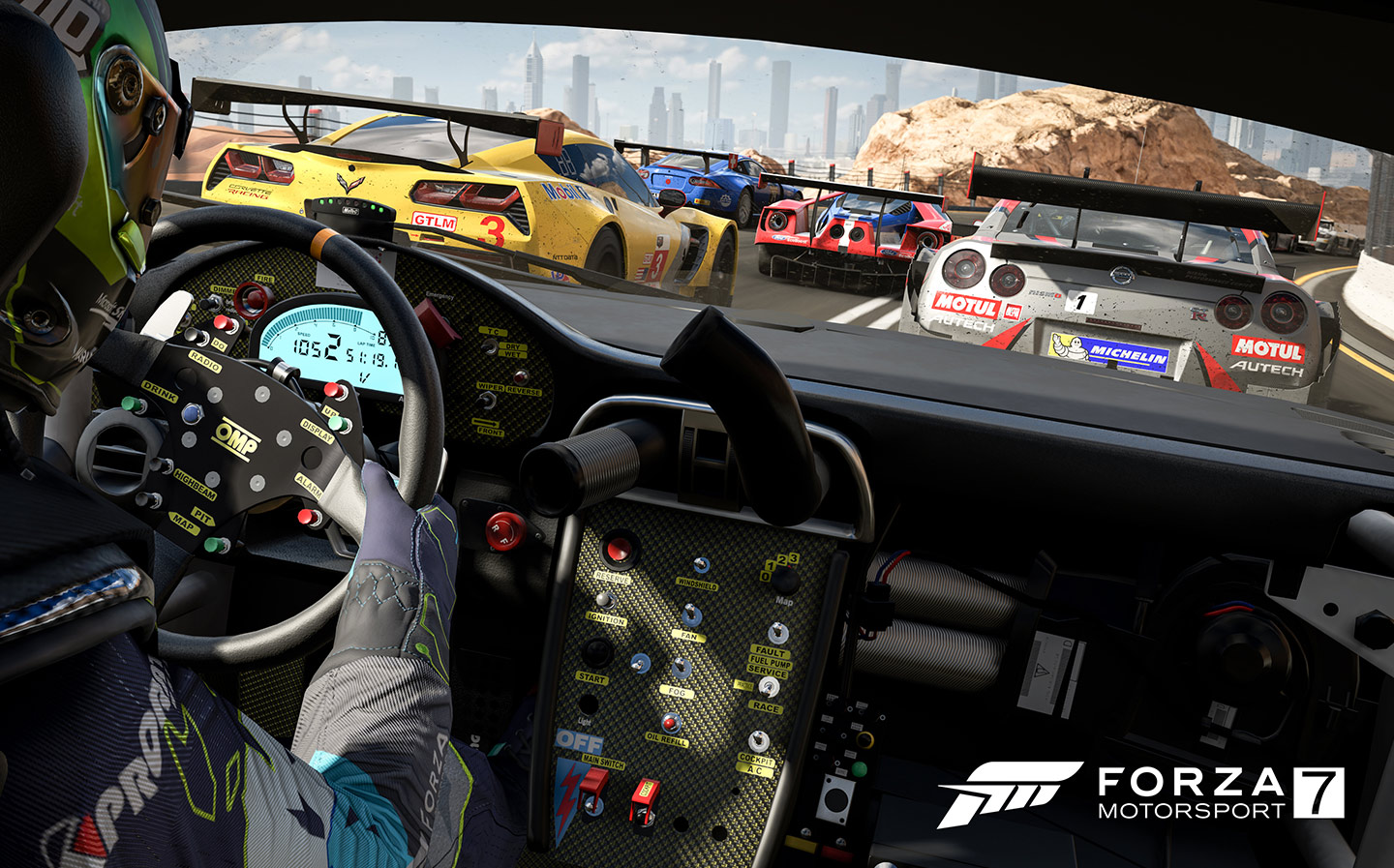 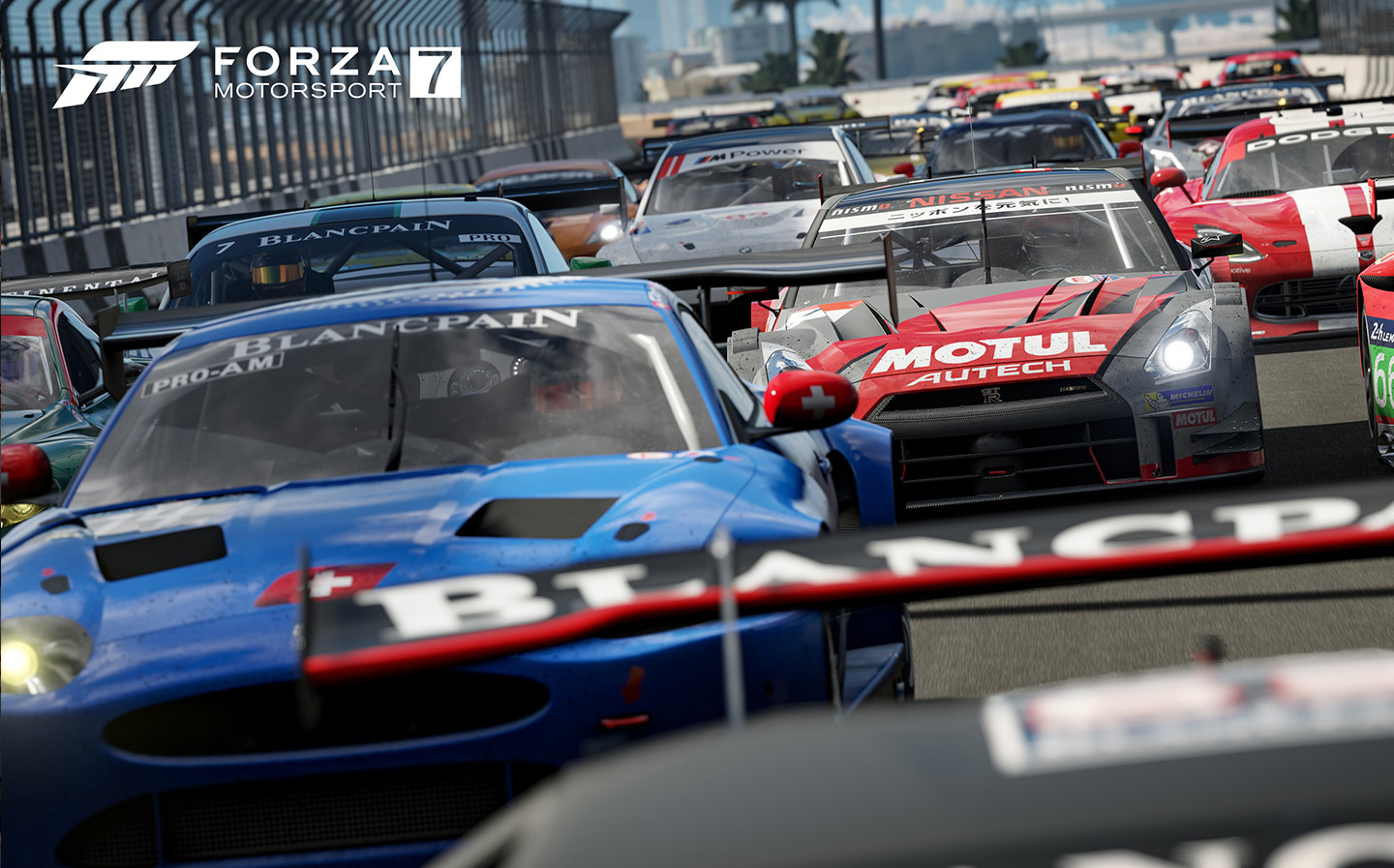 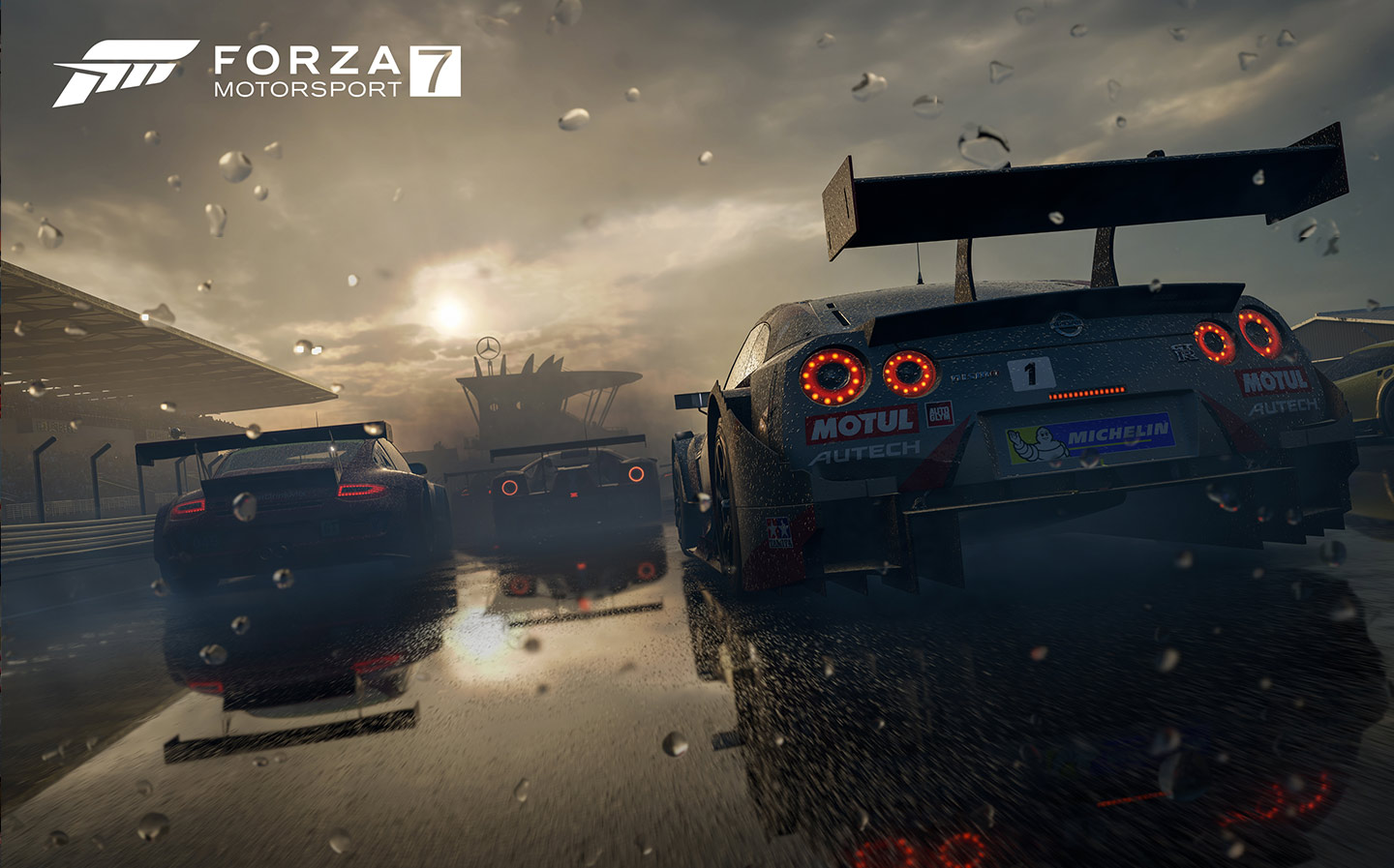 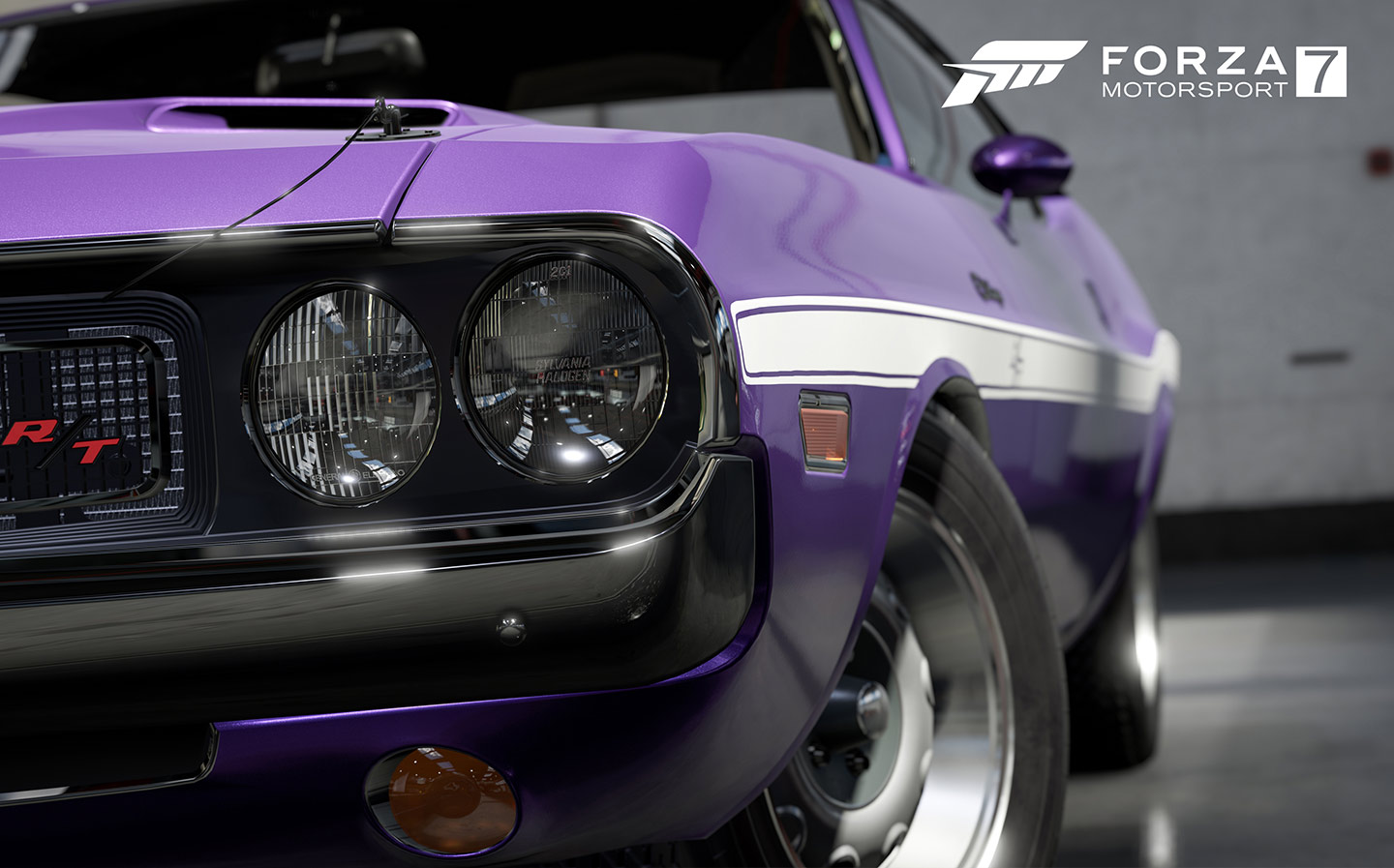 LADIES and gentlemen, remove your jackets of gaming allegiance and check them in at the cloakroom; it’s time to use the F-word: Forza.

For many players of driving games, Gran Turismo was the title of choice, from the very first iteration on the original Playstation right through to 2013’s GT6. The latest version in the series is Gran Turismo Sport, which at the time of writing is being revealed to media and gamers, in Italy.

Gran Turismo Sport game has been in development for years – there was an early launch event held in March 2016 – but in racing games, as with buses, it seems that you wait ages for one and then several arrive at the same time. Not long ago came the excellent but rather challenging Project Cars 2, then last week Silverstone circuit, home of the British Grand Prix, was the venue for the launch of Forza Motorsport 7.

Some onlookers may be tempted to view games such as the Forza series as niche hobbies for a few geeky teenagers battling one another from their bedrooms. But they are big business. Launched on the Microsoft Xbox in 2005, over the seven track-focused “Motorsport” games and three street-based “Horizon” spin-offs, which first arrived in 2012, Forza has made more than a billion dollars in retail sales, putting it in an elite group of the highest-grossing video game franchises of all time that also includes Super Mario, Pac-Man, Sonic the Hedgehog and Tetris. Forza still trails the Need for Speed and Gran Turismo franchises, but it should be pointed out that they had a head start, launching in 1994 and 1997 respectively.

Forza was always seen as a close rival to Gran Turismo. But as it was on Xbox – the console I didn’t own – I was sworn to dislike it as a matter of course. I could as much play Forza as a member of LA gang the Crips can go for a white wine spritzer with someone from bitter rival, the Bloods. Only games journalists can move between the two consoles without consequences.

But it’s time to do some growing up, walk over to the other crew and shake off the shackles of racing game loyalty. And having bounced with Forza Motorsport 7 for a while (and learnt the correct pronunciation: “fort-za”, not “fors-a”) how liberating it is to be able to say: you were right, Xboxers… Forza is superb.

The new game promises to not only sell well, but also sell consoles. The Xbox One S, which recently went on sale, is essentially a slimmer version of the old Xbox One with a few additional connectivity upgrades, 4K (much more detailed than HD) movie streaming and “upscaling” of compatible games to 4K resolution. The Xbox One X that arrives next month has more potent performance so promises true 4K gaming.

According to Dan Greenawalt, creative director of the game, Forza Motorsport 7 was built from the ground up for the Xbox One X. In our press briefing he talked about pixels, strobing, shaders, texturisation, high dynamic range (the contrast between light and dark, for example bright sunshine blasting through dark clouds) and other technical tricks. It also runs at 60 frames per second – around twice the number of frames currently found in HD television shows. This makes the gameplay smoother but requires greater processing power. Forza Motorsport 7, it is claimed, will test the new Xbox One X console to its limits.

For some reason those of us who attended the launch event are not allowed to tell you what we think about the graphics, or show you video or photo captures, despite the fact that you’ll already find reviews of the game complete with video gameplay online. I’m not even sure if I can tell you why, exactly, but the version of the game we played is for the high-powered console, which doesn’t go on sale until November.

Driving has been assured that we can still give you our impressions of the gameplay, handling and audio, though, as they are no different from what has already been played elsewhere. Come back on November 1 for my thoughts on the aesthetic details.

Let’s talk physics, then. Greenawalt has been the driving force behind Forza ever since its conception. Like Kazunori Yamauchi, the rock star of the racing game world who conceived Gran Turismo, Greenawalt is a passionate petrolhead and cares deeply about getting plenty of metal in the game.

In fact, Forza Motorsport features a mammoth roster of 700 vehicles; some double up as customised versions of standard models, but it’s still a vast collection to play with and includes 80s supercars, modern hypercars, eclectic classics, legendary historics, dirt vehicles, rally cars and more. Naturally, I headed straight for the Free Play area, which allows you to “rent” pretty much any car you like, straight off the bat. I jumped first into a Ferrari F40 and then a McLaren F1 – two hero cars from my youth. Chances are you’ll find one of your heroes here, too, whatever your vehicular persuasion.

Out on track, you quickly learn that the most satisfying view is from the cockpit, where the speedo and rev counter move accurately, you get a little head movement as you accelerate and brake, or change gear, and details such as the wiper blades vibrating as air flows over the car add to the sense of realism. The only downsides are the occasionally slow hand movements when changing gear, when compared with the engine note, and the fact that the odometer doesn’t change as you drive.

The engine noise isn’t perfect but Forza, as I understand it, has always outperformed the Gran Turismo series’ “vacuum cleaner” sounds. It wouldn’t be hard, to be honest (that will undoubtedly change for the better with GT Sport). Forza’s F40 V8 roars and its turbos’ wastegate whistles, the Honda Civic Type-R has a familiar “angry wasp” tone and the Jaguar D-type’s straight-six sounds deliciously raspy. It certainly gives Project Cars 2 a run for its money here.

Other sounds are mostly good: tyre squeal is subtle in most cases, wind noise likewise, and thunderstorm in the D-type proved vaguely terrifying at times, but collisions with other vehicles seemed to vary between one of two sounds: glass tinkle or thud.

The handling is superb for those who aren’t pro-gamers. If you’re used to iRacer, or even Project Cars 2, you might feel the way the cars moves around on track is a little foreign, and perhaps inconsistent, but for us, Forza is much less frustrating experience than either of those. Anyone should be able to jump straight into the game and play, and do so with a joypad (no expensive wheel and pedal set-up required). We were still able to feel immediately the differences between the vehicles, both subtle and pronounced. The way they pitch and roll, understeer and oversteer seems remarkably well judged.

Greenawalt pointed to his studio’s collaboration with car makers over the years, whereby they receive pockets of expertise with individual manufacturers. Forza Motorsport 7 has an exclusivity deal with Porsche, so the German marque gave only his developers engineering know-how and unfettered access to its current vehicles in return for and marketing tie-ups, including the launch of the 911 GT2 RS at the E3 game show.

This, Greenawalt says, means not only do Porsches have a greatly improved feel this time around but also all the vehicles have benefitted, particularly in the area of weight transfer, which Porsche was able to help them improve.

In the past, tyre tests have improved the movement of the rubber, resulting in a much more analogue sense of flex through turns rather than grip being either on or off.

Greenwalt says it’s this increased realism that actually makes the game easier to play, not harder. It’s why you can drive a car round a circuit in real life without hitting tyre barriers every five seconds – you can feel the car moving early, and adjust inputs to compensate. When a car in a game just snaps away from you without warning, and it’s harder to drive than real life, something’s not right with either the basic set-up or the programming.

Removing driver assists brings extra realism as well as challenges. Switching off ABS, for example, has a more profound effect on some cars than others, reflecting different brake disc sizes, tyres, weight balance, and so on.

Realism isn’t always desirable, though. Greenawalt says they dialled back the realistically light steering feel of one car as gamers didn’t believe it felt right, even if the developers had tuned it to what they believed to be perfection, having spent a day with the real thing. A case of the customer is always right, perhaps, even if they’re 12 years old and haven’t so much as driven their mum’s Fiat 500 down the driveway.

The way a car handles isn’t the be-all-and-end all, mind you. If it were, I’d never have spent hours with Virtua Racing for the Sega MegaDrive or my first racing game, World Grand Prix for the Sega Master System.

Even more important is a feeling of progression and reward. This comes in the form of the Forza Driver’s Cup. It has six levels of competition, which unlock as you work your way through the sub-series. Starting in the Seeker championship, you can choose to race in a number of disciplines including hot hatches, supercars, open wheel legends or racing trucks. Success earns points and points mean progression.

It’s a pretty involving set-up meaning you can jump into a wide variety of vehicles from the off, but the points rewards and series unlocks should still keep your interest as you find you own path and discover hidden motoring gems along the way.

Perfect feel for the casual gamer, a huge selection of cars and it’s arguably easier to pick up and play than Project Cars 2. This is great fun all the way, with seriously impressive in-car views and weather effects. I’ll be more than happy to wave the Xbox and Forza flags from now on; just don’t take away my PS4 cap and GT t-shirt away just yet.