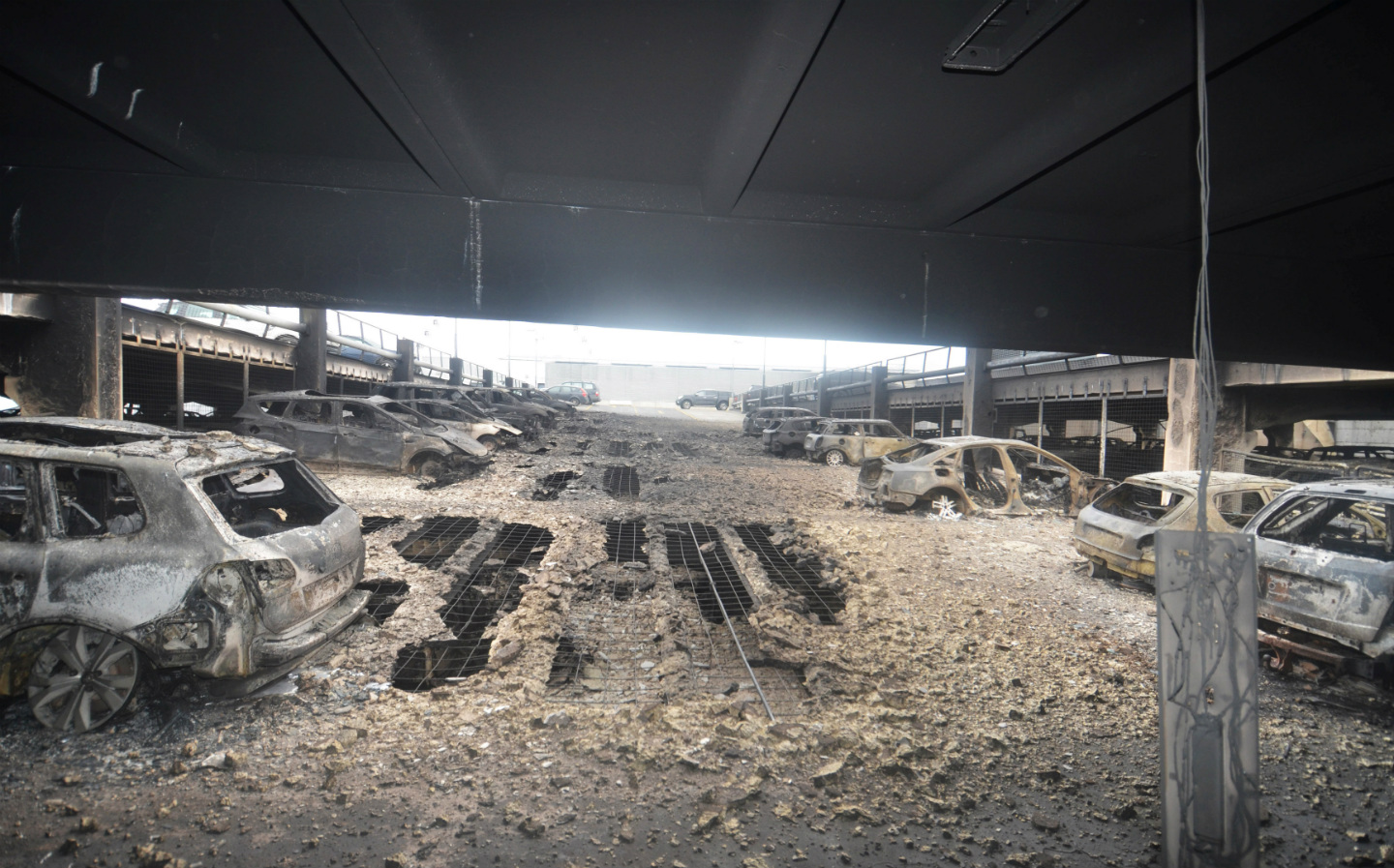 THE BLAZE that destroyed 1,400 vehicles as it swept through a multistorey car park on New Year’s Eve could have been halted by sprinklers, a fire chief said.

The final event of the Liverpool International Horse Show at the Echo Arena was cancelled after the fire spread rapidly from a Land Rover in the neighbouring seven-storey car park.

Victims described abandoning their vehicles, grabbing possessions and running for their lives.

An investigation is being held into the cause and why the fire was able to spread so rapidly. One expert said the rules that exempted car parks from having sprinkers were based on 50-year-old research.

Dan Stephens, the chief fire officer of Merseyside Fire & Rescue Service, said that crews did not have access to enough water to stop the blaze but were able to delay it spreading while the 11,000-seat arena and neighbouring flats were evacuated. Four thousand people were watching the horse show.

“Had the car park had sprinklers that would certainly have acted to suppress the fire. It may well even have extinguished the fire,” he said.

“Had the car park had sprinklers that would certainly have given us a far better chance to get sufficient water on the fire to put that out. But beyond a certain point . . . the heat release rate from vehicles is such that we just didn’t have access to the water to put it out.”

Photographs show that the fire appeared to move from the third floor to upper and lower levels at about the same time with flames spreading via the open sides of the car park. Mr Stephens said the car park was “unstable” having suffered “localised collapses”.

Car owners were told to claim on their own insurance policies, which means that they could lose their no-claims bonuses.

An industry expert said that insurance companies were expecting claims of more than £2 million. The figure could rise above £10 million. Companies are likely to settle their own claims and would not seek to recover the cost from the owner or insurer of the Land Rover.

A spokeswoman for the Association of British Insurers said: “Insurance is there to cover the costs of just this type of incident, and in 2016 motor insurers paid out more than £33 million every single day.”

Joe Anderson, the mayor of Liverpool, praised the “kindest city in the world” after local people offered lifts home or accommodation to those stranded.

Mark Wright, the former Liverpool and England footballer, and his wife, Sue, helped to raise the alarm. They had attended the horse show and spotted the fire as they left the car park just before 5pm. Mr Wright took their children outside while his wife dialled 999 and told stablehands on the ground floor to get their horses out of the car park. Mrs Wright, a former barrister who is now the managing director of a hotel company, said she saw a fire in the engine bay of an old Land Rover.

“The flames were just shooting out of the engine and coming past the tyres. It looked like a ball of fire on the front of the car and it was producing a lot of smoke,” she said. “I saw one car on fire but it was clear it was ferocious and spreading.” The minibus the family were travelling in with their friends was one of the vehicles destroyed.

Kevin Booth, 44, of Manchester, had left his six-month-old Fiat 500X in the car park as he took his wife, Julie, and 16-year-old daughter Holly to see the horse show. “The flames and the smoke was unbelievable,” Mr Booth said. “It was frightening — we could hear the bangs of car windows exploding.”

Liverpool city council said it had provided temporary shelter for about ten people who had been stranded overnight. The fire service said crews rescued two dogs from a vehicle inside the car park and four from the roof.

Mr Anderson said the council would take advice on any “lessons to be learnt”. The building is owned by the local authority and was constructed in 2008. “We will listen, we’ll take advice from the chief fire officer, we’ll look at what we do with this car park and what we do with our car parks if the advice is that we should have sprinkler systems,” he said. “We won’t bury our heads in the sand. I have heard conflicting advice.”

Merseyside police said initial investigations indicated that an “accidental fire within a vehicle caused other cars to ignite”. The Driver and Vehicle Standards Agency’s register of recalls for Land Rovers since 1992 shows a number of warnings about issues that could lead to fires. The Automobile Association database of vehicle recall notices shows that three of the nine recalls of Land Rovers since 2005 have involved a risk of fire.

The Building Research Establishment reported in 2009 that there were about 260 fires in car parks each year, although most did not spread to other vehicles. It found that “the effectiveness of sprinklers in limiting fire to a single car has been demonstrated” and that multivehicle fires could cause structural damage.

But in 2015 a Building Research Establishment project funded by the government found it was not cost-beneficial to install sprinklers in multistorey car parks. Keith MacGillivray, chief executive of the British Automatic Fire Sprinkler Association, said that regulations for car parks were based on research on vehicle fires in the 1960s. “The size of fuel tanks has increased substantially, all vehicles now have air bags with detonators, the upholstery is more flammable than that of the 60s, also the size of most vehicles is much larger than earlier vehicles therefore the space between cars in a car park is less and allows greater fire spread from vehicle to vehicle,” he said.

Eighty cars a day are estimated to catch fire and 68 per cent of accidental fires are caused by vehicle defects with “wire and battery”, according to government research. Fuel leaks and the overheating of engines, causing wires to melt, are common. Given that cars contain large quantities of combustible materials, such as fuel, interior lining and seats, an intense heat is generated. This means that a fire can spread easily from one car to others close by.