BILLIONAIRE Elon Musk has successfully launched a Tesla Roadster electric car into space on the maiden flight for the world’s most powerful rocket, on a journey to Mars with a mannequin driver, dubbed “Starman”, aboard.

The launch of the Falcon Heavy rocket, built by SpaceX, Musk’s space transport services company, went better than the tech entrepreneur had imagined.

Prior to lift-off he said the challenges of developing the new rocket meant the chances of a successful first outing might be only 50-50. “I had this image of just a giant explosion on the pad, a wheel bouncing down the road. But fortunately that’s not what happened,” he told reporters after the event.

After launch, two boosters and one core rocket separated from the craft and returned to Earth. The boosters were shown landing themselves back on their own launch pads in a beautifully-synchronised manoeuvre.

The core was due to land itself on a floating landing pad but the video feed cut before viewers, watching on a live stream on YouTube, were able to get visual confirmation. It later emerged that it had been lost during the return attempt.

However, Musk described the process as, “Epic; literally the most exciting thing I have ever seen.”

The next stage is described as the “Trans-Mars injection”, which will see the Tesla Roadster orbit the sun in a way that sees it pass close to both the Earth and Mars.

“It has plenty of propellant to complete the Trans-Mars injection, assuming that the fuel doesn’t freeze, the oxygen doesn’t boil off and the electronics don’t get fried” said Musk during a press conference held after the Falcon Heavy launch.

He added that the success taught him that “…crazy things can come true. I didn’t think this would work. When I see the rocket lift off, I see a thousand things that could not work, and it’s amazing when they do.”

Curious types can watch the Tesla Roadster’s journey through space, by following the live feed from SpaceX, below.

ELON Musk, the techpreneur founder of PayPal and Tesla, declared himself “giddy and happy” last night as he prepared to launch his new Falcon Heavy rocket into space – complete with his own Tesla Roadster and ‘Space-Stig’ aboard.

Musk hopes that today’s test will prove a defining moment for SpaceX, the space transport company that is attempting to perfect affordable, reusable spacecraft.

Falcon Heavy is scheduled to blast off from Florida’s Kennedy Space Center at 18.30 GMT. It is the company’s most powerful rocket yet, a combination of three Falcon 9 rockets that gives the combined muscle of 27 Merlin rocket engines.

It stands at around 68 metres tall (224ft), compared with 110m for Saturn V, the heavy-duty rocket from the ‘1960s, and is capable of carrying around 60 tons of payload into orbit.

However, because of the historically high failure rate of maiden flights, SpaceX is only carrying a dummy payload. In this case, it’s a red Tesla Roadster, complete with a mannequin dressed in a space suit strapped in the driver’s seat. 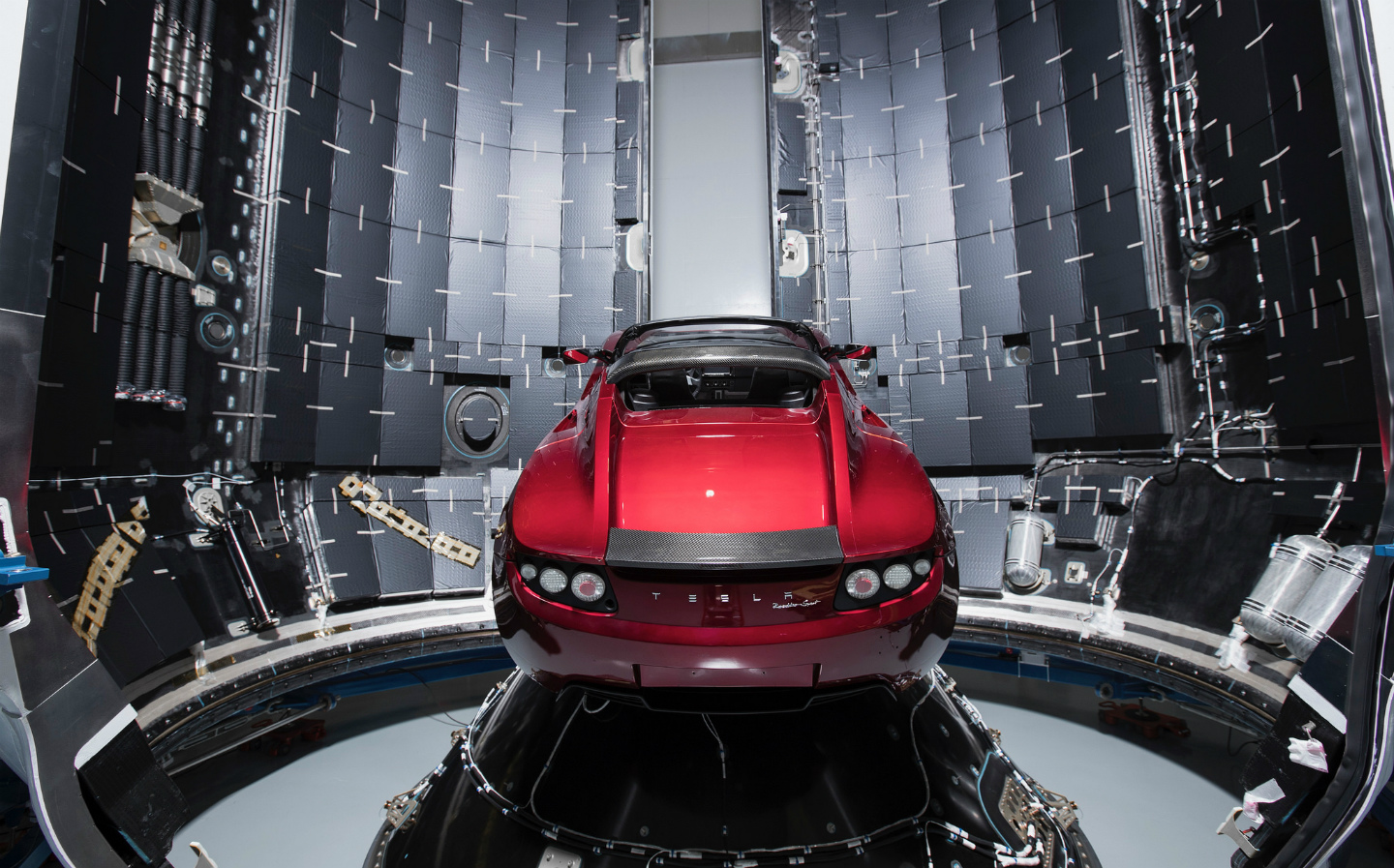 Some wags have dubbed the driver the Space-Stig. It will be listening to David Bowie’s Space Oddity on the stereo.

All being well, the Tesla and Space-Stig will be sent on a path for Mars, travelling at an estimated seven miles per second. It will trace the red planet’s orbit around the Sun.

Unlike Musk’s last high profile PR stunt for the Roadster, which ended with BBC Top Gear pushing the electric car after it ran out of battery, there will be no concerns over range anxiety. Musk told reporters it is estimated the car will travel “in that orbit for several hundred million years, maybe in excess of a billion years.”

The launch can be watched live by following SpaceX’s feed on You Tube, above. Should the launch prove successful, it could prompt crewed missions to the Moon and Mars.

Musk says he is at peace with the prospect of failure: “I’ll consider it a win if it just clears the pad and doesn’t blow the pad to smithereens. That’s 4,000,000lbs of TNT equivalent. There’s probably not going to be much left if that thing lets loose.”