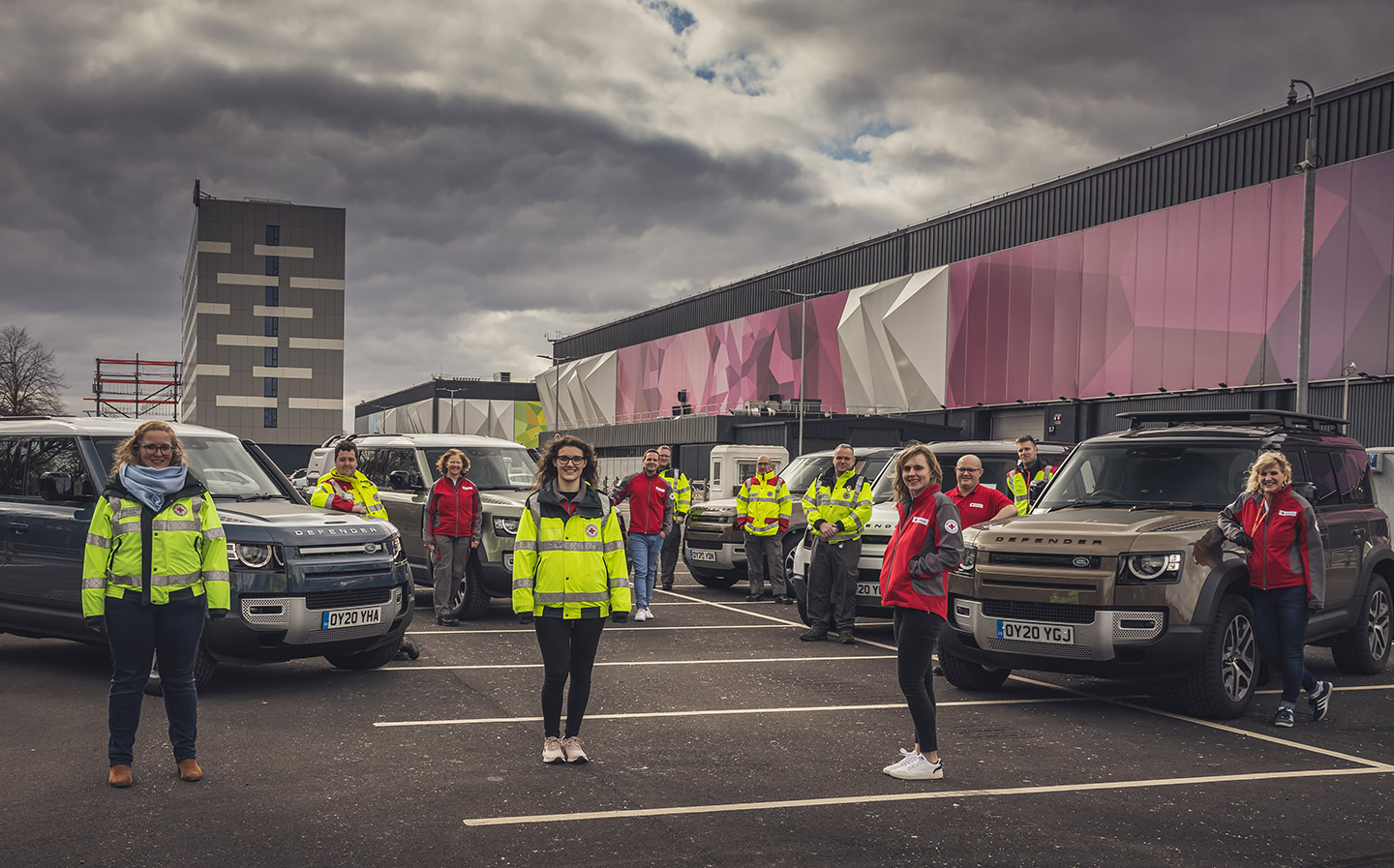 AS PART of a truly global industry, car makers were forced to pause production as soon as Covid-19 struck and nations began to impose restrictions on movement across borders. With workers in “non-essential” industries told to stay at home to “flatten the curve” and slow the spread of the virus, and global demand nosediving, vehicle plants had no choice but to pause production.

But with expert engineering knowhow and fabrication tools at their disposal, many car companies and motor sport teams have shifted their focus to manufacturing equipment to help save lives, while others are helping in other ways in the fight against the coronavirus pandemic, including extended breakdown services for customers and providing vehicles to the emergency services. Here’s how various brands are getting involved.

Ford has worked with GE Healthcare to license a ventilator and plans to produce as many as 50,000 of them at a Michigan factory by July.

The design from Airon Corp is currently produced at a rate of three per day, at Airon’s Florida facility. Ford is sending a team of its own to work there initially, while readying its own Rawsonville Components Plant in Ypsilanti, Michigan for large-scale production of the Airon Model A-E ventilator from April 20.

In Britain, Ford has loaned around 170 of its vehicles to support emergency transport efforts and donated personal protective equipment (PPE) from its plants to local healthcare authorities. The Bridgend engine plant has given away 13,500 pairs of gloves, 150 disposable safety suits and a quantity of protective goggles, while the factory in Dunton is currently trialling the fabrication of protective face shields.

Formula One teams McLaren and Williams Advanced Engineering, a division of the Williams F1 team, have joined an engineering and technology consortium that also includes Airbus, GKN, Rolls-Royce, PA Consulting, Thales, Siemens and BAE Systems, to produce medical ventilators in response to the coronavirus crisis. The aim is to quickly produce an initial batch of 5,000 Smiths ParaPAC300 ventilators.

Williams and McLaren had already joined five other UK-based Formula 1 teams — Red Bull, Racing Point, Haas, Mercedes and Renault — in forming the “Project Pitlane” initiative, responding to the UK government’s call for help producing medical equipment. The teams are concentrating on three areas: reverse engineering existing medical devices for Covid-19, supporting scaling up production of existing ventilator designs and the rapid design and prototyping of a new type of ventilator.

In additional, former McLaren F1 boss Ron Dennis has said his family’s charitable foundation will aim to deliver a million meals to NHS workers over the next three months. The Dreamchasing foundation focuses on mentoring and financing children and young people to help them achieve their goals in life, though Dennis told Good Morning Britain that he “decided to really try and step up to the plate.”

‘I decided to really try and step up to the plate.’

Former McLaren boss Ron Dennis is using his foundation to deliver a million meals to NHS workers in three months.

A great initiative to help NHS frontline workers through the crisis ? pic.twitter.com/k9sBII8U8d

GM, which counts Chevrolet, Holden and Cadillac among its brands, has started producing face masks in America, having developed a new production line for them in just seven days. It says 20,000 masks will be produced by April 8, and up to 1.5m masks per month will be possible when up to speed.

It is also retooling its facility in Kokomo, Indiana, to produce ventilators in partnership with Ventec. The first ventilators will be delivered next month, GM says, and production will be ramped up to a manufacturing capacity of approximately 10,000 critical care ventilators per month, “with the infrastructure and capability to scale further,” if necessary.

Any NHS worker who drives a Peugeot, Citroën, Vauxhall or DS car who does not already have any mechanical breakdown cover will get free PSA’s Roadside Assistance “for the duration of the COVID-19 pandemic”, the alliance has said.

It was a benefit only available or twelve months after first registration (three years for DS owners), but is now offered regardless of vehicle age, mileage or if the vehicle has previously been maintained outside the Peugeot, Citroën, DS Automobiles or Vauxhall Authorised Repairer network.

NHS staff stuck by the roadside should call the following numbers and quote ‘NHS Key Worker’:

In addition, the John Grose Citroen dealer in Ipswich has prepared and delivered 70 vehicles – primarily Citroën Dispatch vans – in double-quick time, despite staffing shortages, to NHS Property Services, the organisation behind the management of NHS facilities. The vans are part of an existing order of 200 vehicles in support of a new maintenance support contract from 1st April.

The new vans are essential to aid the maintenance and repair of NHS facilities in the UK, comprising 3,000 properties and 7,000 tenants.

Meanwhile, according to Car Dealer Magazine, the Simon Bailes Peugeot dealership, which operates in Northallerton, Stockton and Guisboroughin, is allowing pharmacies to use its demonstrator vehicles for free to help meet demand for home deliveries of medicine and prescription drugs. As the dealerships are closed during the lockdown, these vehices would otherwise be sitting idle.

Kia says its Roadside Assistance, run in partnership with the RAC, continues to operate for customers who have cover. This is no surprise, given the breakdown services continue operating during lockdown.

The company also says that if a customer’s latest scheduled service has been delayed due to lockdown, it will honour those covered by service plans valid during the government measures, and warranty claims will also be extended, should the seven-year warranty end during the lockdown.

Jaguar and Land Rover are lending a fleet of 57 vehicles, including 27 new Defenders that had been set aside to use in a marketing campaign that is now postponed indefinitely because of the virus, to the British Red Cross. They will be used to deliver medicine and food to vulnerable people.

It’s part of a wider initiative across the company’s teams in Spain, France, South Africa and Australia, with at total of 160 vehicles lent to Red Cross societies, with additional markets offering help to their own local efforts.

Simon Lewis, British Red Cross’s head of crisis response, said: ‘We have been overwhelmed by the kindness shown across the country, not only by our increasing number of volunteers, but also our long-standing partners.

‘Thanks to Land Rover’s generous support, our emergency response teams in the UK will be able to reach even more people living in isolated communities than we could alone.’

In addition, Jaguar Land Rover says it is working closely with the UK government, offering its research and engineering expertise as well as digital engineering and design, printing of 3D models and prototypes, machine learning, artificial intelligence and data science support.

Protective equipment is being donated to the NHS including wraparound safety glasses to the Royal Bolton Hospital, St James’s Hospital in Leeds and Birmingham Children’s Hospital.

The reusable NHS-approved protective visor has been designed at the Advanced Production Creation Centre in Garden in consultation with NHS staff, with Jaguar Land Rover initially aiming to produce 1300 units per week using its prototype build operations. It will then work with other companies, including Pro2Pro in Telford to further increase production, with the goal of eventually producing 5,000 of the units a week.

The device is designed to be easily dismantled and cleaned so that it can be used again, helping to combat equipment shortages.

The Volkswagen-owned supercar maker is helping the health service in Italy, which has been devastated by the Covid-19 virus, to produce surgical masks and plexiglass shields at its Sant-Agata factory.

The firm is producing 1,000 masks a day for the Sant’Orsola-Malpighi Hospital in Bologna, and 200 plexiglass shields a day using 3D printers.

Mercedes’ F1 engine division, Mercedes-AMG High Performance Powertrains, worked with University College London to reverse-engineer a breathing aid that can be manufactured in its thousands.

Having started work on the project on March 18, the ‘Continuous Positive Airway Pressure’ device has already been approved for use by the NHS. Michael Gove, Minister for the Cabinet Office, has said that 10,000 CPAP devices will be delivered to help Covid-19 sufferers with breathing difficulties.

Such devices are already being widely used in Italy and China to help Covid-19 hospital patients with serious lung infections breathe more easily, avoiding the need for invasive mechanical ventilation.

The Chinese-owned British brand and its dealer network are supplying 100 MG ZS EV electric SUVs to NHS agencies, on a six-month loan free-of-charge. The first six cars to be delivered went to the Lancashire and South Cumbria NHS Trust via MG dealer Chorley Group.

Daniel Gregorious, head of sales and marketing, said: “By providing 100 electric cars to our NHS heroes, we hope that we will help to keep healthcare moving so that as many people as possible can receive the support they need. It’s also our way of saying thank you to those selfless people who work so hard to keep us all safe”.

The company is also extending its AA-supplied MG Roadside Assistance breakdown services to all owners who purchased an MG between March 23, 2019 and April 30, 2019 until the end of May, free of charge.

Seat’s Martorell factory in Barcelona, which normally produces the new Seat Leon, has been transformed to manufacture automated ventilators for local healthcare authorities to help battle the global pandemic, COVID-19.

The factory is bringing together 150 employees from different areas, adapting their usual workstations to build the ventilators.

Engineers designed 13 different prototypes before the final design was agreed, and the team is currently testing it in collaboration with the local Spanish healthcare authority to get approval for mass production, Seat says.

The ventilators — designed in collaboration with Protofy.XYZ — are made up of 80 electronic and mechanical components including adapted windscreen wiper motors, gearbox shafts and printed gears.

The Czech brand is loaning charities and volunteers in its home country more than 200 vehicles and 150 electric scooters used by its HoppyGo car sharing platform. The firm is also working with the Czech Technical University in Prague to develop a 3D printing process to produce ventilators.

Elon Musk, founder of the electric car company, said he bought 1,255 ventilators from China and donated them to medical staff in Los Angeles, as China has an oversupply of the ventilators. Tesla is also believed to be in talks with the US government about ventilator production.

Any VW employees in Germany with medical qualifications are being allowed to volunteer to work in the country’s public health service with full pay for up to 15 days, and the company has also arranged for around £35m of medical equipment to be shipped from China to Germany, where it will be distributed to medical facilities in the Lower Saxony region.