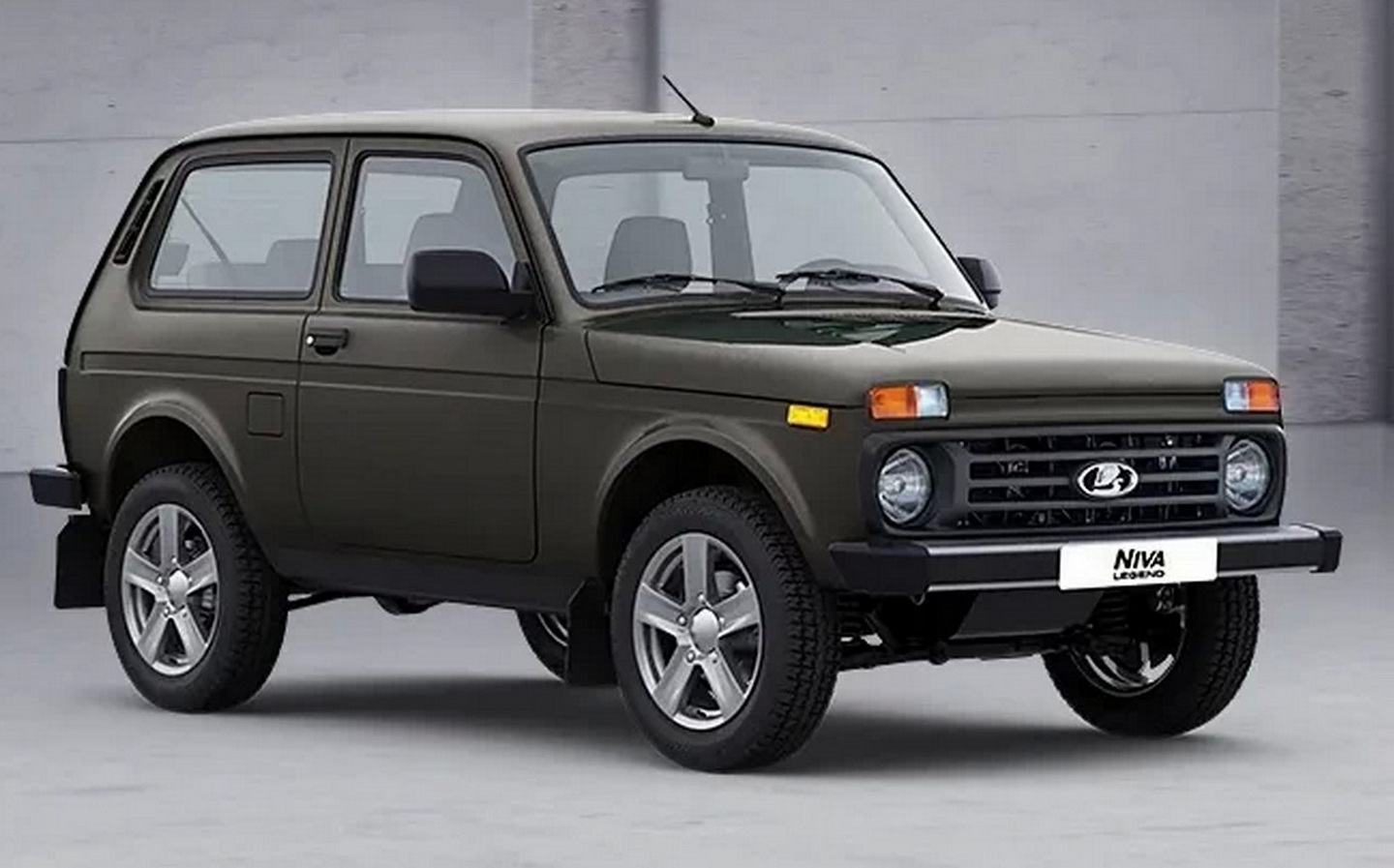 YOU MAY have heard of the Lada Niva, a compact 4×4 first launched in 1977. It became a symbol of hardy Soviet motor cars, with go-anywhere ability, a low price and easy-to-fix engineering. Did you know, though, that not only is the Niva still in production but also car buyers in the UK can still get their hands on a brand new example?

The model is thriving in Russia, Germany and other markets around the world, and its UK importer, Kent-based Mark Key of Lada Niva 4×4 provides a comprehensive range of Nivas in a variety of body styles, including the classic two-door, a long-wheelbase four-door, a van and a pick-up version.

Styling has hardly changed at all since the 1970s (the below example is from 1992) with a lot of sharp, straight lines and the indicator lights still positioned above the headlights looking like premier Brezhnev’s eyebrows. 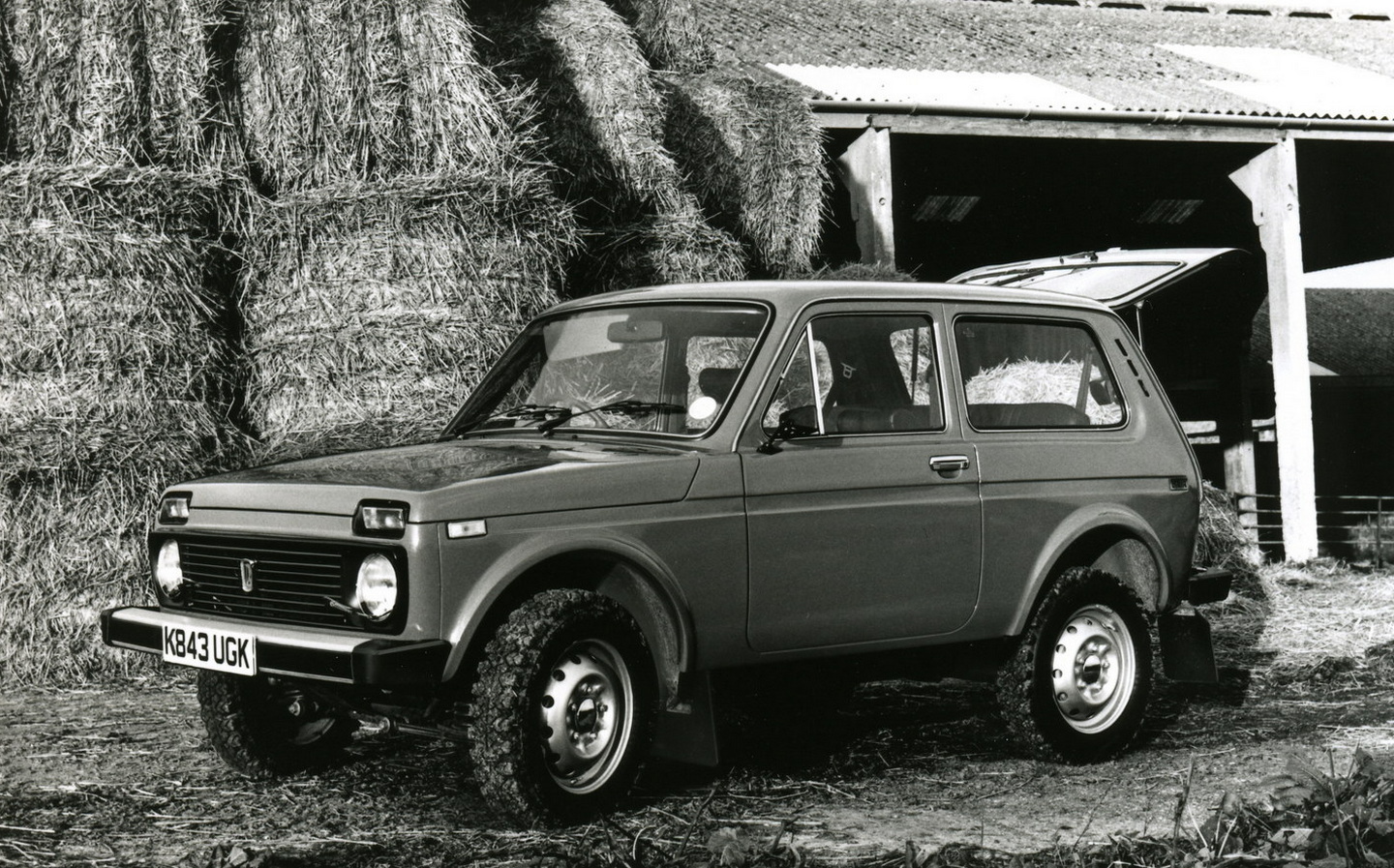 Although some higher-spec models feature body-coloured bumpers and 16in alloy wheels, cheaper versions still use contrasting black bumpers and steel wheels for that genuine utilitarian look.

The design remains true to the engineers’ intention of creating a “Renault 5 on a Land Rover chassis” and the hatch-backed Niva is very slightly larger than the Suzuki Jimny, though that car was withdrawn from sale from multiple European markets just months after it was launched, due to its engine’s emissions levels. Other Niva competitors are few in number, making it quite a unique and interesting proposition to UK buyers.

Compared to most modern cars, the Niva’s interior is extremely spartan, still retaining its 1970s ergonomics. The base model doesn’t even come with wind-up windows, let alone air conditioning. 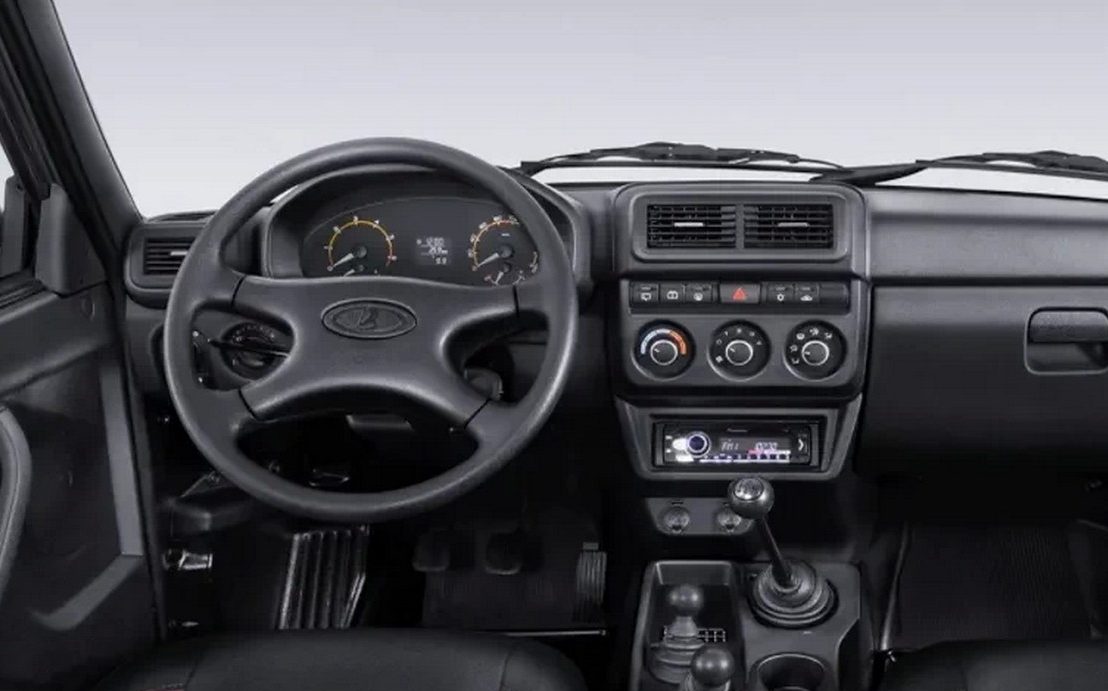 Elsewhere in the range, the Niva offers a few more creature comforts such as electric windows and air conditioning, though luxurious it is not. The switchgear has been upgraded over the years and in its current iteration appears to be derived from old Renault models.

The new Niva doesn’t even come with a stereo as standard, though the importer says “stereos, roof racks, transfer case protectors, gun racks — you name it and it exists. We can supply, fit or simply point you in the right direction.” 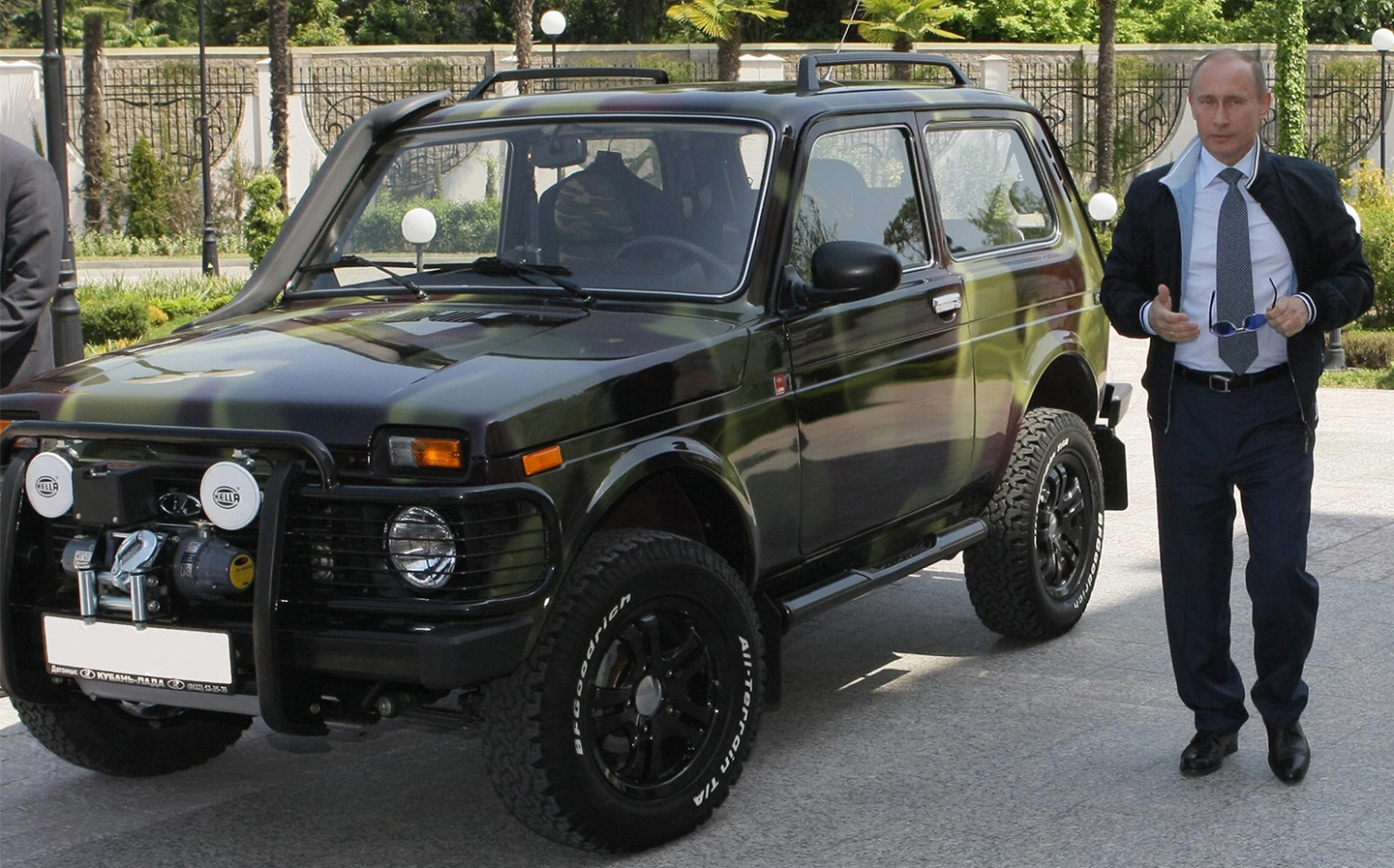 As the Niva is fundamentally a relic, safety features are mostly non-existent. Even in 2002, the Russian safety assessment programme, ARCAP, gave the Niva zero stars out of four. These days there’s a driver airbag and anti-lock brakes, at least.

The Niva has always used a Fiat-derived engine and currently employs a 1.7-litre four-cylinder motor with fuel injection. The 0-62mph sprint is dispensed with in a leisurely seventeen seconds and a fuel economy figure of just 19mpg is quoted.

One of the main draws of the Niva is that it’s essentially a brand-new classic car complete with all its retro style, an adequately modern engine and a two-year warranty.

The Niva’s other major selling point is its outstanding off-road capability. Permanent four-wheel drive, a low ratio gearbox, differential locks, a short wheelbase, independent suspension, skinny little wheels and a kerb weight of under 1,300kg mean that the Niva is still as able as any modern 4×4 to tackle anything thrown at it.

One was used by the Russian Antarctic Expedition between 1990 and 2001 and covered around 25,000 miles carrying equipment and personnel in temperatures as low as -54 degrees. 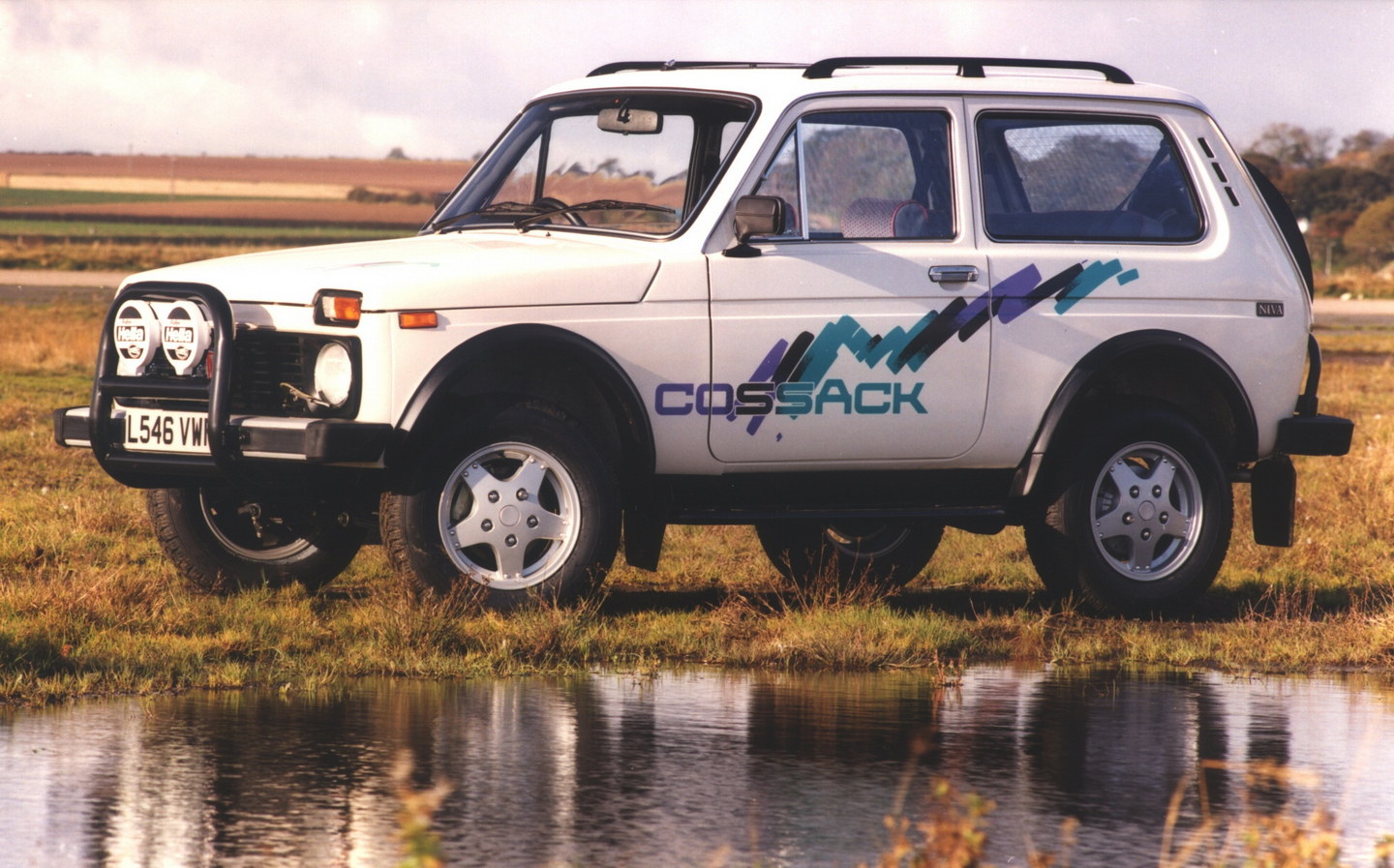 In 1998, a five-door model was parachute-dropped from a plane to became the first car to reach the North Pole. Another managed to get to the Everest Base Camp, at an altitude of 17,598ft (5,364m), that same year.

In short, it’s more than capable of dealing-with anything Britain has to throw at it… Late Brake Show journalist Jonny Smith’s recent foray into deep water in a quarry notwithstanding.

For those looking to get their hands on the noble Niva, you can pick up a base model for as low as £12,595 plus VAT. But there’s a catch: you will need to self-register the car, including taking it for an IVA (like an advanced MOT) and sending off the paperwork to the DVLA.  If you want a car that’s ready to drive off straight away, prices start from £17,595.

The Luxe version of the long-wheelbase model — with air conditioning and alloy wheels — starts from £19,444, while prices for utility models are available on request from the importer.

There is another major drawback to buying a new Lada Niva in the UK. AvtoVAZ, its manufacturer, does not build the car in right-hand drive, so it’s only sold in left-hand drive, even in the UK. 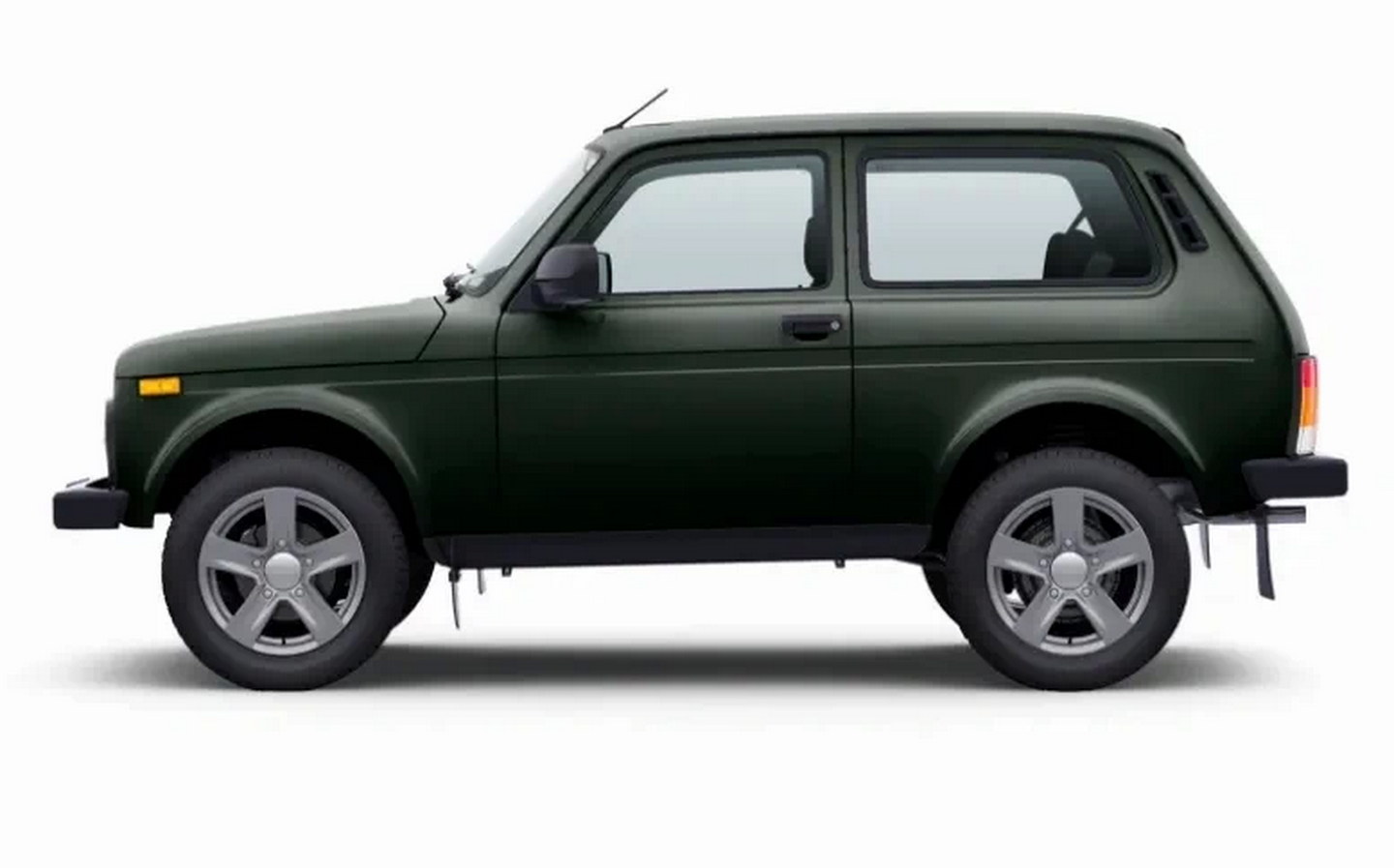 Here’s the final snag: those who can live with left-hand drive and the rest of the Niva’s idiosyncrasies, and who wish to buy one in the UK, don’t have forever to act. Despite its ongoing popularity, Niva production will cease in December 2023 after 46 years. That’s because a new model, based on Renault underpinnings, is set to launch in 2024.