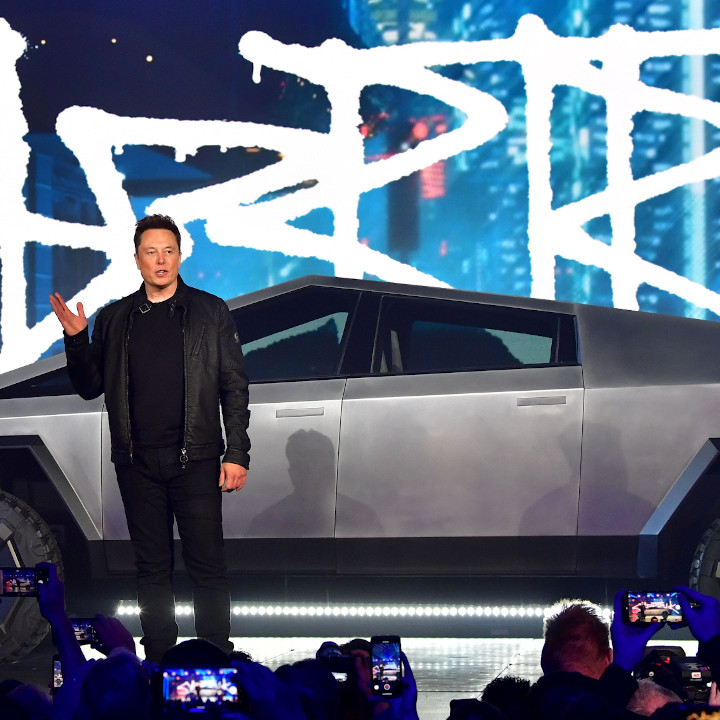 The billionaire CEO gave the figure to Automotive News during an interview on Sunday. The figure, while not to be scoffed at, is actually lower than many expected. It’s less than a third of the (perhaps overly optimistic) 713k figure that Tesla’s famously devout owners’ club had predicted, and a full 50,000 lower than the number Musk himself had claimed last November when the vehicle was first unveiled.

The figure also pales in comparison to the number of reservations the Model 3 received when first unveiled. The saloon received 518,000 total reservations — although it is an entry level model and perhaps caters to a wider variety of tastes, it has a similar starting price to the Cybertruck and came earlier in Tesla’s existence.

Around 63,000 of the Model 3’s reservations were cancelled, so it’s also possible that a portion of those who put down refundable $100 deposits for a Cybertruck in November may cancel their reservations, especially in light of the financial insecurity caused by the coronavirus pandemic.

The lower-than-expected number of reservations for Cybertruck may also reflect just how polarising its design has been. The love it/hate it debates online when it was unveiled last year have echoed well into 2020. With Musk citing iconic design inspirations including the water-going Lotus Esprit from James Bond film The Spy Who Loved Me (a car/submarine that Musk himself owns), the styling of the car has been called childlike by its critics and game-changing by Tesla disciples.

The resourceful Mr Musk has taken all of this into account, however. In the same interview, he told Automotive News that if the Cybertruck is a commercial failure, Tesla will simply create a more traditional, marketable pickup truck to bring to market.

Admitting that Tesla did “zero” market research when planning it, Musk laughed when asked if the company had consulted potential customers during the design process. He said: “We just made a car we thought was awesome and looks super weird. I just wanted to make a futuristic battle tank — something that looks like it could come out of Blade Runner or Aliens or something like that but was also highly functional.”

Unworried about incensing Tesla’s rivals, he continued: ‘But I wasn’t super worried about [the prospect of the Cybertruck not selling] because if it turns out nobody wants to buy a weird-looking truck, we’ll build a normal truck, no problem. There’s lots of normal trucks out there that look pretty much the same; you can hardly tell the difference. And sure, we could just do some copycat truck; that’s easy. So that’s our fallback strategy.”

Although he said that Tesla is not looking to poach customers from other car makers, Musk has repeatedly taken jabs at the Cybertruck’s competition, posting a video to Twitter shortly after its debut of it pulling a Ford F-150 (one of America’s most popular pickups) up a hill.

A more traditional looking electric pickup truck from Tesla would compete for the same demographic as Rivian R1T, which is said by Rivian to do up to 400 miles on a single charge and has Land Rover Defender-like off-road credentials.

The top-spec tri-motor Cybertruck, meanwhile, will apparently be able to do 0-60mph in a staggering 2.9 seconds, and has a claimed range of over 500 miles. Of course, the more you try and achieve the former stat, the less likely you are to achieve the latter.

Musk also emphasised that the Cybertruck is a machine aimed primarily at the American market, although he has also hinted recently at a smaller version of the model that could be more practical for European roads.

Musk’s wide-ranging interview with Automotive News comes less than two weeks after Tesla was voted the car maker with most emotional appeal in the JD Power Automotive Performance, Execution and Layout Study (Apeal). Although it could not be directly measured against other brands because Tesla wouldn’t let JD Power survey its customers in 15 states, Tesla’s score was significantly higher than its closest competitor, Porsche.

This is despite the fact that a survey by the same company about build quality around a month ago found that Teslas had more problems than any other car manufacturer surveyed. It’s important to note that criticisms of build quality in the Model Y did not affect the results of the survey, as the Model Y only began deliveries in the last week of March, after the survey closed.