“JAMES BOND flung the DB Mk 3 through the last mile of straight and did a racing change down into third and then into second for the short hill before the inevitable traffic crawl through Rochester . . . He had chosen the A2 in preference to the A20 to Sandwich because he wanted to take a quick look at Goldfinger-land.”

Goldfinger-land in an Aston Martin? What could be better on a sunny June day? And what could be more appropriate than to make the journey in the Aston Martin that appears to have inspired Ian Fleming to put Bond into an Aston in the first place?

In earlier books Bond had driven a Bentley but in Goldfinger it was an Aston, and for Bond fans it has been an Aston ever since. Of course, for many of us the classic Bond Aston Martin is the DB5, and we know this because we had the Corgi model of it with a pop-up bulletproof screen and a working ejector seat. But it was the DB2/4 that started it all.

All good cars tell a story and the one tested here tells a better tale than most.

All good cars tell a story and the one tested here tells a better tale than most. It starts in 1947 when businessman David Brown, who had made his fortune in tractors, bought the Aston Martin company. Obviously a man of ambition, Brown went on to purchase Lagonda in 1948 and by the early 1950s Aston Martin was turning out top-class sports cars with Lagonda engines.

These “DB” cars became popular and successful in racing circles and in 1955 one was bought by Squadron Leader the Honourable Philip Ingram Cunliffe-Lister DSO (Distinguished Service Order). Cunliffe-Lister appears to have used the car for rallying and added various non-standard features to the specification, including reinforced steel bumpers, a semi-concealed compartment fitted between the front seats and a Halda Speedpilot device, which accurately computes time and distance. In due course the car came to the end of its active life and languished in a garage until it was recently rediscovered and restored. It will be auctioned by Coys on July 12 at Blenheim Palace, Oxfordshire.

So far, so good, but there is another side to the car — the James Bond connection. Lord Swinton, Cunliffe-Lister’s father, had close associations with the espionage business. A confidant of Winston Churchill during the war, he was appointed to head the Home Defence (Security) Executive, which oversaw, among other things, the work of my old service, MI5. In fact, during the difficult period in which Brigadier “Jasper” Harker struggled as head of MI5, Swinton effectively usurped Harker’s role as director, a state of affairs that was corrected when Sir David Petrie took over MI5 in 1941. 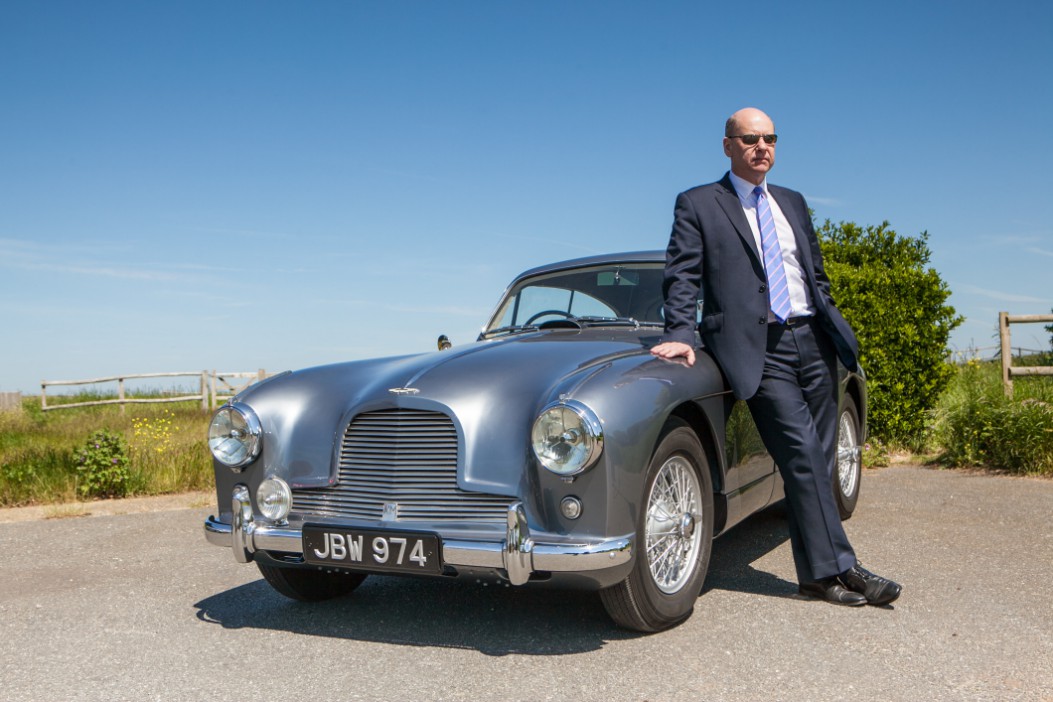 In the 1950s Cunliffe-Lister was a keen participant in international rallies. As it happens so was Fleming, even co-driving on one occasion for Donald Healey of Austin-Healey fame. Moreover, Fleming had a holiday house in Kent immediately next door to Dennis and Rose Ramsay, close friends of Cunliffe-Lister, who visited them regularly.

In his novel Moonraker, Fleming based the lair of the villain Sir Hugo Drax — real name Graf Hugo von der Drache — on the Ramsays’ house. Finally, the various modifications to Cunliffe-Lister’s car bear a striking similarity to those described in Goldfinger, including the reinforced steel bumpers, the concealed compartments and the electrical modifications.

So while we cannot be certain that this is the vehicle that inspired Fleming to put Bond into an Aston, the timings, the connections and the vehicle all fit and it seems highly likely that this is indeed the origin of the Bond-Aston connection.

And so to the car itself. It is a 1954 DB2/4 Mk l Vantage finished in metallic grey, and a very handsome vehicle it is. The Mk l evolved into Bond’s DB Mk 3 over the next few years but the styling cues established in the 1950s pass on through the Aston lineage right up to the present day in the grille and the rear quarters. Less familiar is the hatchback arrangement on this car — one of the earliest. This gave the designers the problem of how it should best be incorporated and their answer was a smallish rear window cum door that opens onto a flat load area. 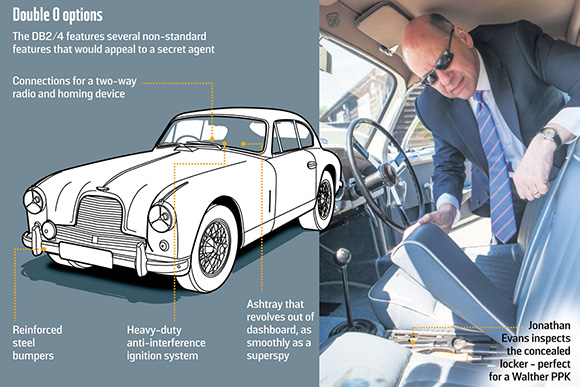 The Jaguar E-type coupé has a similar arrangement (though it is side-opening on the Jag) and probably borrowed the approach from the DB2/4 — it certainly looks like it. The slightly later Reliant Scimitar opted for a shooting brake look that, to my eye, works even better. The Aston is a two-plus-two with wide, comfortable front seats but tiny rear perches that are probably best ignored — better to fold the seat backs down so that you get a flat load bay.

Getting into the DB2/4 is a challenge because, although the big frameless doors afford plenty of access, the sills are very high. But once you have climbed over them and reached your seat it’s pretty spacious and visibility is good. The “secret compartment” for the tool set is still in place, complete with tools.

Four circular dials set in the walnut dash incorporate all the necessary instrumentation and there are a few luxuries such as a cigar lighter and a rather fetching leather-fronted ashtray that can be rotated into the dash when not in use — a novel and ingenious contraption for its time that, who knows, may have inspired the ejector seat control hidden in the top of the DB5’s gearlever in the film of Goldfinger. 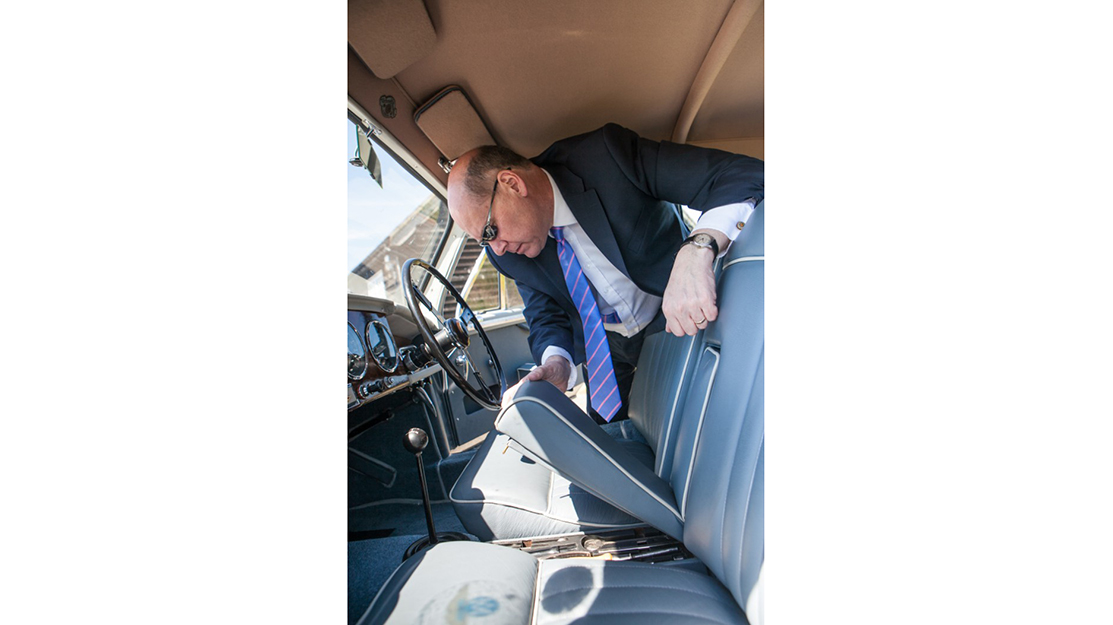 The steering wheel is, of course, huge as there is no power assistance but once you are under way that is not a problem. The four-speed manual gearbox is pretty easy to use and, in fact, it is a forgiving car to drive as it has plenty of torque that lets you pull from low revs. Some later models had overdrive.

The real test, of course, is how it drives and for a 60-year-old car the Aston behaves very well. The straight-six Lagonda engine was very powerful in its day and still has some fire in its belly. On an open stretch you can easily maintain a good cruising speed and the acceleration is acceptable too. The steering is vague by today’s standards and the brakes weak but the ride is good and the only real impediment to a long journey would be the noise.

The Lagonda engine is ever present and with your foot down it thunders. That’s fun for the first half an hour but if you wanted to take the car for a long run across France then either some additional silencing or earplugs might help you to arrive at your destination in an equable frame of mind.

Astons have pulling power and this one more than most

Astons have pulling power and this one more than most. Parking up at Reculver in Kent, by the ancient church mentioned in Goldfinger, we were soon surrounded by admirers wanting to talk about the car and take photos. It became clear that the Bond connection with the Kent coast was unknown to most of the locals.

Maybe the county tourist board should sponsor the next Bond film, though even with the Turner Contemporary gallery I rather doubt Margate has quite the cachet of Acapulco or Istanbul. But what goes round comes round, and maybe in 60 years, with climate change, the world’s rich and glamorous will be queuing up for a nice cup of tea in Herne Bay and strolling the beaches of Broadstairs as if they were in Rio. We could even be hosting the World Cup there.