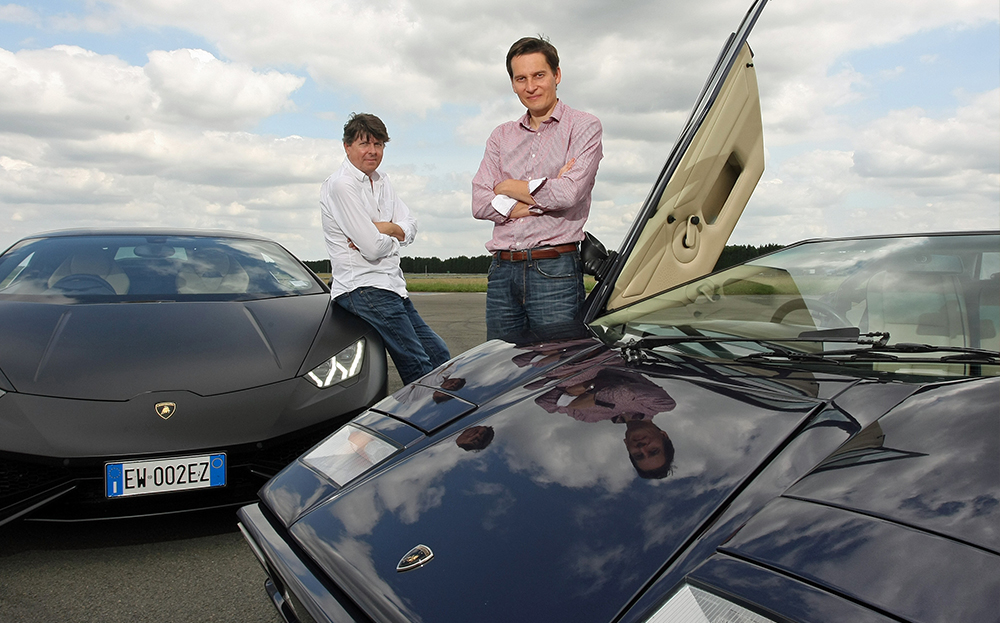 Sinatra owned a Lamborghini Miura. So doubtless he would have approved of Driving’s comparison of the new Huracán LP 610-4 and the old Countach 5000 QV.

We’ve gathered them together to allow us to debate the evolution of the modern supercar. Well, that and to have a jolly good time driving them. What progress has been made in the time that separates this 1987 Countach and the latest, 2014 Huracán?

In its day, the V12-powered Countach vied with the Porsche 911 Turbo, Ferrari Testarossa and even the Ferrari 288 GTO for the honour of being named the world’s greatest supercar.

Today, the V10-powered Huracán must outperform the same 911 Turbo, Ferrari’s 458 and even its sister model, the Audi R8, if it’s to be king of the hill.

It is built around an aluminium and carbon structure, and the 5.2-litre, 602bhp V10 drives all four wheels via a seven-speed dual clutch transmission.

Let’s get stuck in… 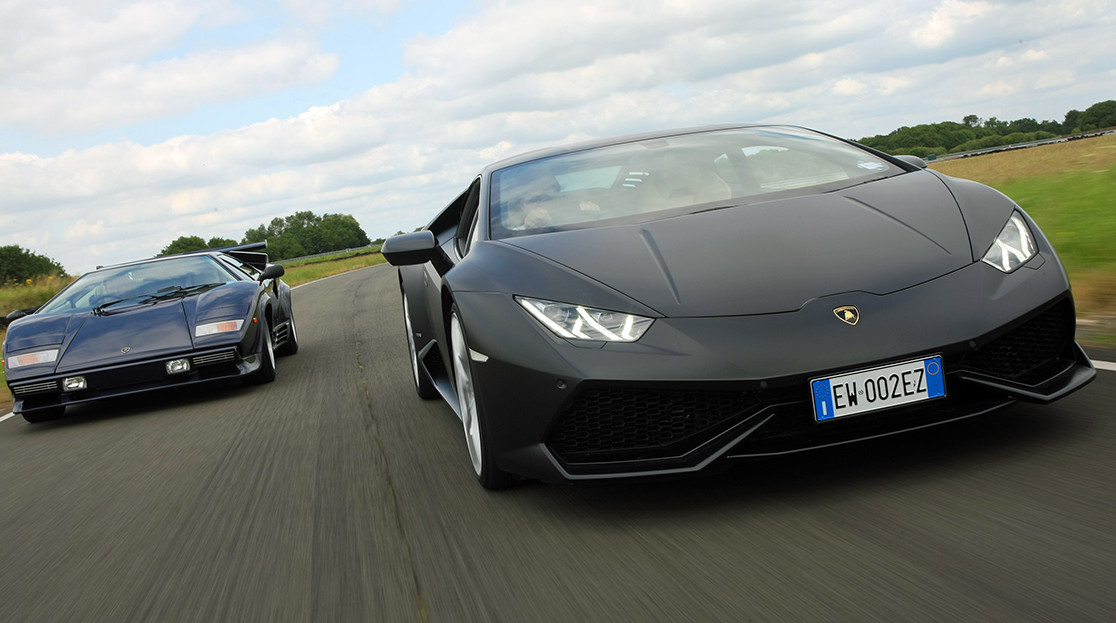 IT’S THE little things I find reassuring about the Lamborghini Huracán. Like the fact that when you depress the brake pedal, the car stops. It does this, very reliably and very quickly, and even if you happen to be going quite fast. There’s none of that slightly off-putting ‘stamping down repeatedly and still not getting anything’ business that can make stopping in older supercars something of a worry.

And, accordingly, you don’t have to do any of those things you have to do to get, say, a Lamborghini Countach to halt, such as clambering onto the pedal with both feet, pitifully yanking backwards on the steering wheel and screaming.

Something else I find reassuring about the Huracán: when you press the accelerator down, the car travels directly up the road – catapults like a pea off a fork, frankly, albeit it with a blood-stirring, guttural roar of which peas can only dream. What the Huracán doesn’t do is immediately turn left and set off across a field while your arms vainly try to wrestle it back on course, which is a habit older supercars can be prey to, mentioning no Lamborghini Countachs.

Something I find reassuring about the Huracán: when you accelerate, it doesn’t immediately turn left and set off across a field

So, brakes that work, pleasantly unsurprising straight-line acceleration – at the risk of sounding quaint, these are things one comes to cherish when behind the wheel of one’s top-end supercar.

And that’s before we even mention the pleasingly sculpted, wonderfully broad, leather-bound interior. Whereas the Countach… well, don’t get me wrong: sticky-back plastic was a ground-breaking craft material and Blue Peter practically wouldn’t have existed without it. But the inescapable truth is that the Countach driver is essentially driving around in something that Valerie Singleton did earlier.

I’ll take the automatic gearbox over the now medieval-feeling hunt-and-hope manual, too, largely because there’s ‘being in control of your driving destiny’ and there’s ‘having your wrist snapped off’.

Charismatically blippy and rowdy on a track in ‘Sport’ setting, the Huracán’s automatic system is also perfectly well-mannered in real-world situations and had made it imperceptibly up to seventh in the time it took to travel a couple of hundred yards from a set of a traffic lights to a mini roundabout in Nuneaton. Would you even dare attempt to pilot a Countach through a built-up area? One slip of the foot and you’ll be posting it through a shop window.

There’s a time and a place for a Countach; the time is 1980 and the place is a museum.

I also happen to think (and this may be marginally more controversial) that the Huracan is the more handsome object. Again, it’s like the Countach – but with all the obvious benefits of evolution. With the Huracán, the designers seem to have arrived at the ideal meeting point between Italian sports car and Stealth Bomber. Furthermore, the one I drove had one of those matt black paint-jobs which (little insider secret here) render cars entirely imperceptible to speed cameras.

What’s that? They don’t? Well, anyway.

Far be it from anyone to wax snooty about the unforgetable slice of automobile heritage which is the Countach. But there’s a time and a place for it, and the time is 1980 and the place is a museum. And I would happily drive to that museum to see that Countach.

But would I drive to that museum to see that Countach in a Countach? Purely on the grounds that I would quite like to get there, I’ll take the Huracán, if that’s all right. 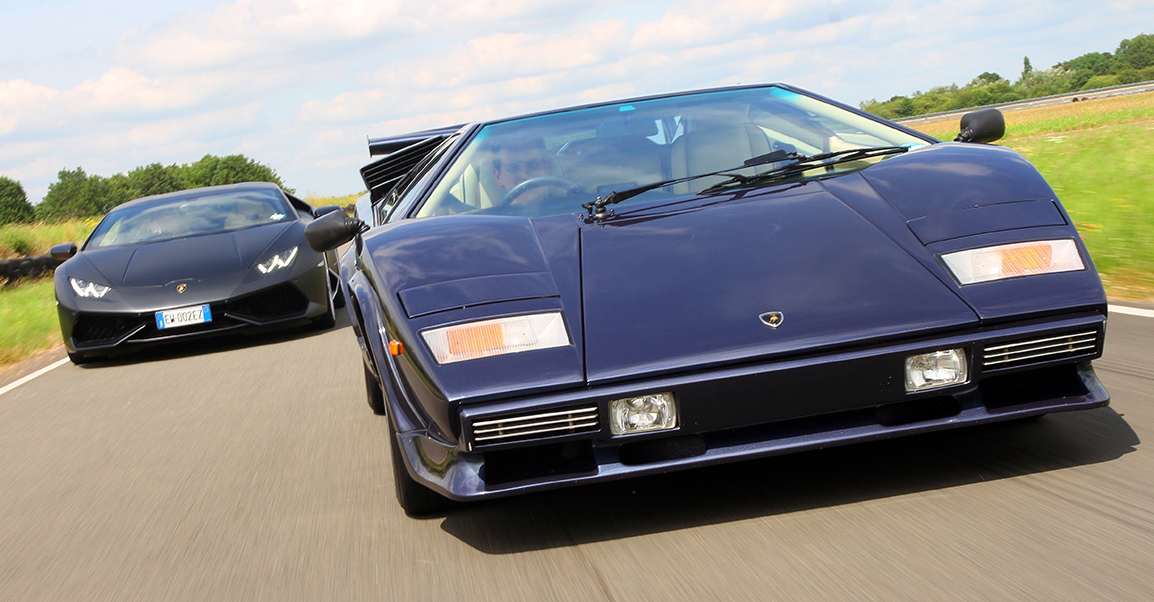 THERE IS a scene in Wall-E, the Pixar animated movie, where we see ourselves in the future, riding around on hover chairs and communicating through projected hologram screens – even when face to face. It paints a depressing picture: we have become lazy, obese and introverted.

Cars are going that way. Even supercars like Lamborghinis. It’s astonishing to realise just how much of the driving the Huracán does for you. Want to change gear in less time than the blink of an eye? No problem, you don’t even need to lift a finger. Feel like driving at 200mph? Just ease your right foot through 90 degrees. Can’t see your way along a winding road? No need to slow down, the four-wheel drive and electronic stability control will keep the car on the straight and narrow.

Whatever you ask of the Huracán, it will obey as faithfully as Andrea Sachs, the hapless assistant in in The Devil Wears Prada. It’s all so, well, easy. My Grandmother could drive it to the greengrocers, for heaven’s sake.

Whatever you ask of the Huracán, it will obey. It’s all so, well, easy. My Grandmother could drive it to the greengrocers, for heaven’s sake.

She couldn’t drive the Countach. I barely could. The effort required to turn the steering calls for two hands to be clasped firmly around the wheel with the commitment of a climber dangling from the Eiger’s north face.

The trick is to dip the clutch pedal, notch the dogleg gearbox to the left and back for first gear, and then feed in the power and get the tyres rolling. However, that involves things like starting the V12 engine, dipping the clutch, feathering the throttle and letting the clutch back up again. Those seemingly simple acts will have beads of sweat running down your brow as if trying to diffuse a bomb.

Starting the Countach is like raising a dragon from its slumber. You don’t know whether it’s going to bite your head off or toast you to a crisp.

It’s a 5.2-litre V12 with four valves per cylinder – hence the QV, or Quattrovalvole name – that runs with Weber carburettors. They cough and splutter like the Marlborough Man. But once everything is warmed through, the Countach clears its throat, lunges forward and its bellow fills the cabin and rolls across the countryside like thunder.

It demands physical effort from the driver and the utmost concentration. You don’t just get in, drive, then ask the sat nav to take you to the nearest McDonalds because you’re peckish. You plan a route. Check the fuel levels. Wipe the dipstick. Then say a little prayer. Every drive is an event, an opera.

Of course, the Huracán whips down the straights and round corners like a greyhound. But what part is the driver playing? It’s no more taxing than riding the bullet train out of Tokyo.

Whereas the Countach’s body rolls, the tyres don’t always grip and the brakes sometimes take a nap. And changing gear calls for the diplomacy of an ambassador as you attempt to coax the lever through the exposed metal gate.

The Countach demands physical effort from the driver and the utmost concentration. You plan a route. Check the fuel levels. Wipe the dipstick. Then say a little prayer. Every drive is an event, an opera.

Sure, it’s more cramped than a Ryan Air flight to Malaga, and the cabin approaches temperatures at the centre of the sun (there is air conditioning, but it wasn’t working, presumably because the car’s generous owner has a slightly sadistic streak), but Ray Bans will hide the fear in the driver’s eyes and a linen shirt will cool quickly.

The Huracán left me wondering, why spend all that money on a car that’s as easy to drive as an Audi saloon? It sounds fantastic at maximum revs when the driver has selected Sport or Corsa driving modes, but ordinary the rest of the time. It does everything for the driver, keeps them at arms length.

The Countach is the car that stays etched on your memory long after the V12 has been silenced. It’s not built for the supermarket run; it’s made for alpine passes. Now, if you’ll excuse me, I have a road trip to plan… 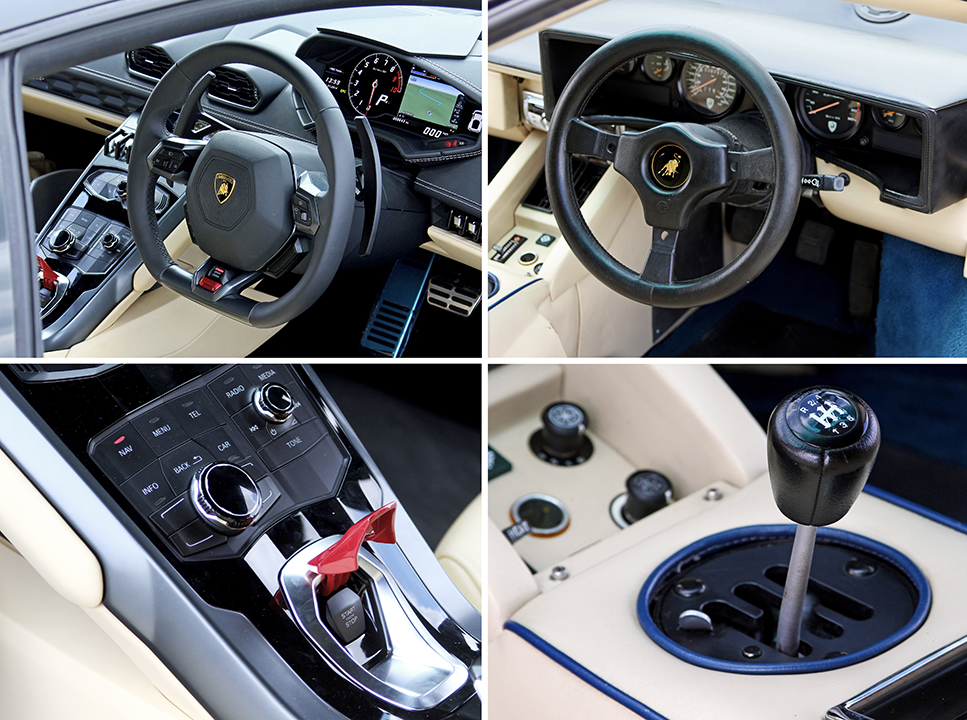