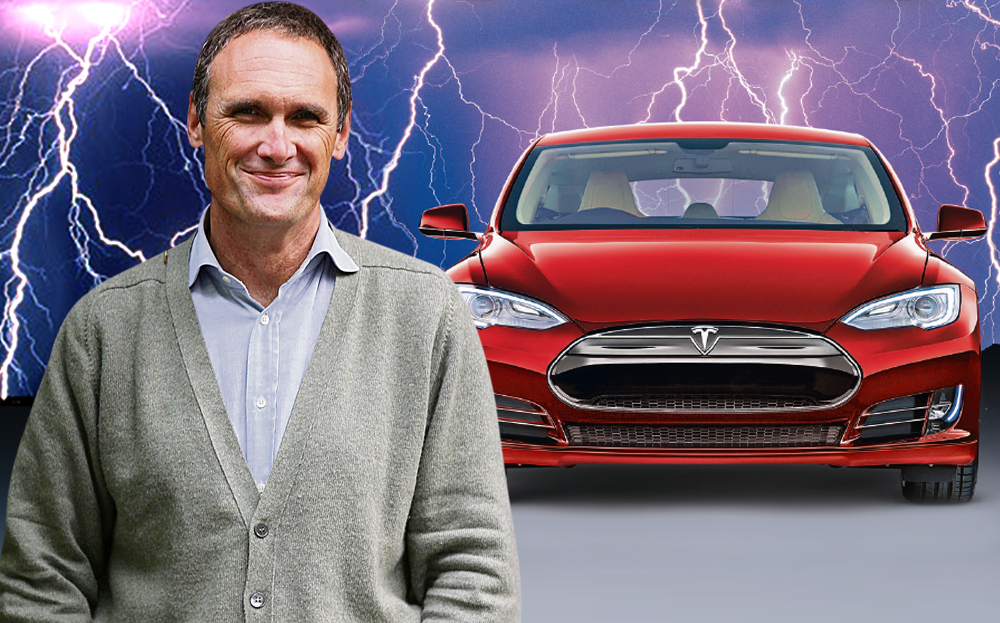 THERE ARE many original and astonishing things about the Tesla. Most astonishing is that it is the only car to be named after a Serbian. And the only famous Serbian who didn’t end up in a war crimes trial or play tennis.

You can see why Elon Musk, the combative chief executive of the car company, chose Tesla. He was an inventor, an electrical engineer who improved the electric motor. But more than that, he was reborn to be a mythic hero for Silicon Valley architects of the new tomorrow.

Nikola Tesla fought against the man and big business, Edison and General Electric. In the great “current wars” between AC and DC, Tesla was the bribed, bullied, derided and better-looking little guy. And he was right.

He was also an outsider, an immigrant, a habitual gambler. A man who invested his considerable fortune in mad projects, having been a star pupil who left university without a degree and fell out with his Orthodox parents. Musk is a South African immigrant who left Stanford after two days to pursue the horizon, co-founded PayPal, made a fortune and invested it in various stairways to heaven and an electric sports car. He sees himself as the electric David in a land of corporate, petrol-headed, internally combusted Goliaths. And he’s almost certainly right.

I’m going to cut to the chase about the Tesla. We can do all the knobs, screens, ego and haberdashery later because cutting to the chase is what the Tesla does best. The woman who delivered it to me said: “Watch the torque — it’s addictive.” Well, I thought, it’s come to the right place. I’ve been addicted to almost all the other stuff. Let’s jack up the torque! Except I don’t really know what torque is.

“Is it like the offside rule?” I said helpfully. 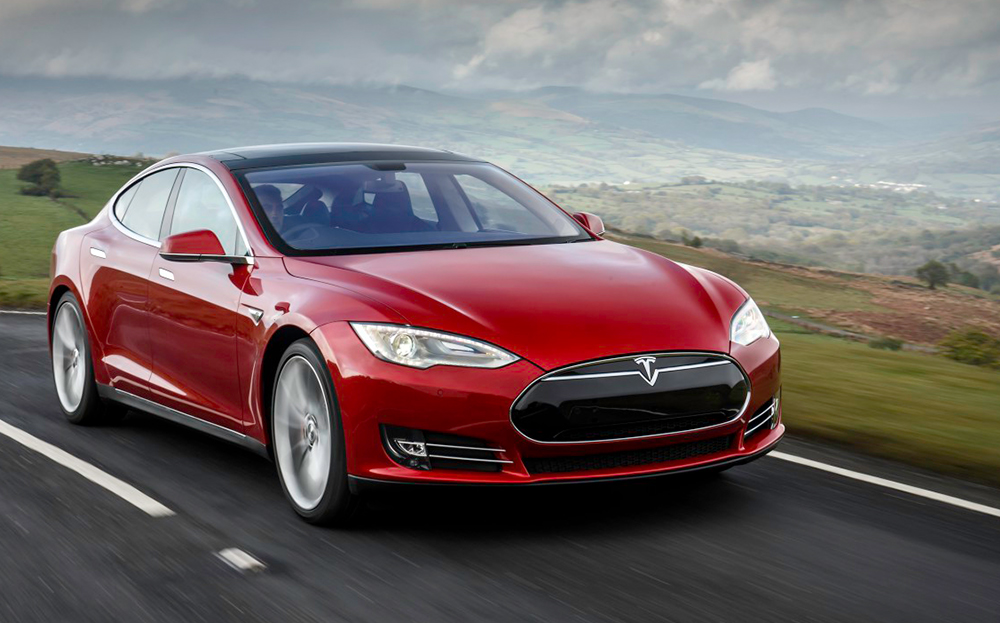 So I called Nick Mason, drummer and car collector and legend and all-round high-performance nerd. “Well,” he said from the back of his limousine, just flown in from Maranello, “it’s like a bully giving you a Chinese burn.”

So I asked Clarkson and he gnomically texted: “Horsepower is how hard you hit the crash barrier. Torque is how far you drag it out of the ground” — which is about as close as he’s going to get to writing Japanese poetry.

So, from all that, I presume that torque is the oily-rag version of the foodies’ umami. Everybody who pretends to know pretends to know, and no one can really describe it. And then I gave the accelerator of the Tesla a little nudge. Just a tap. And, oh my word, in an instant I was pressed down into the seat, shoulders held back, neck tensed, as if some invisible naked Valkyrie was pushing me into an uncompromising position. The car didn’t leap or jump or spring or any of those other motormouthed, feline similes. It stepped up. It slipped into something much, much faster, and it is a brilliant feeling and I wanted to do it again, immediately. Oh, happy, happy, happy torque.

So I asked Clarkson and he gnomically texted: “Horsepower is how hard you hit the crash barrier. Torque is how far you drag it out of the ground” — which is about as close as he’s going to get to writing Japanese poetry.

I now know exactly what torque is. It’s mechanical, silent, smooth, blissful amphetamine. And I really want to do it again. But faster. And longer. Because this is an entirely electric car there are no gears, no combustion, so no engine noise. The speed comes with the white whisper of the wind and the road, which makes it feel much more like being in an aeroplane. The landscape outside goes into blurred, straight lines. There’s a feeling of grip and completely confident control and you realise that noise — the roar, the growl, the howl, the gurgle, the baritone buggery — that combustion engines come with and magnify and orchestrate are really bovine. Ancient, 19th century.

What other bits of modern life do you want to shout at you? Do you want your internet connection to roar like a football crowd? The modern world is silent; it hisses, it whispers, it’s the sound of the minimal friction of electricity. A Ferrari burbles at the traffic light beside us and it sounds like a mechanical madman talking to himself. Once you’ve done this and heard the rush of direct power and instant acceleration without the throat-clearing and the wobble and the time delay, you never want to drive anything else.

Now, back in the room. What about the nuts and bolts? From the outside the Tesla looks like a Jag welded to an Aston by a man who used to make Mazdas, which is exactly what it is. Not unattractive but derivative. A general, all-purpose upmarket sporty motor that’s 50% practical, 50% middle-aged, paunchy ego.

Inside you notice the space. There is no metal gubbins running down the middle to be camouflaged or humped over. The first thing you see is an enormous computer screen set sideways on the dashboard. This is connected by 3G to the internet and has a touchscreen control for the air-con, the radio and the slidy roof, and will tell you all sorts of things such as your power usage and will send you emails from Musk saying that you should take the corners slower.They do actually send engine modifications over the internet.

The controls are a wand that goes up for back, down for forward, push for park. There’s a brake pedal and an accelerator and that’s it. This is what you always wanted Dodgem cars to be when you were seven. 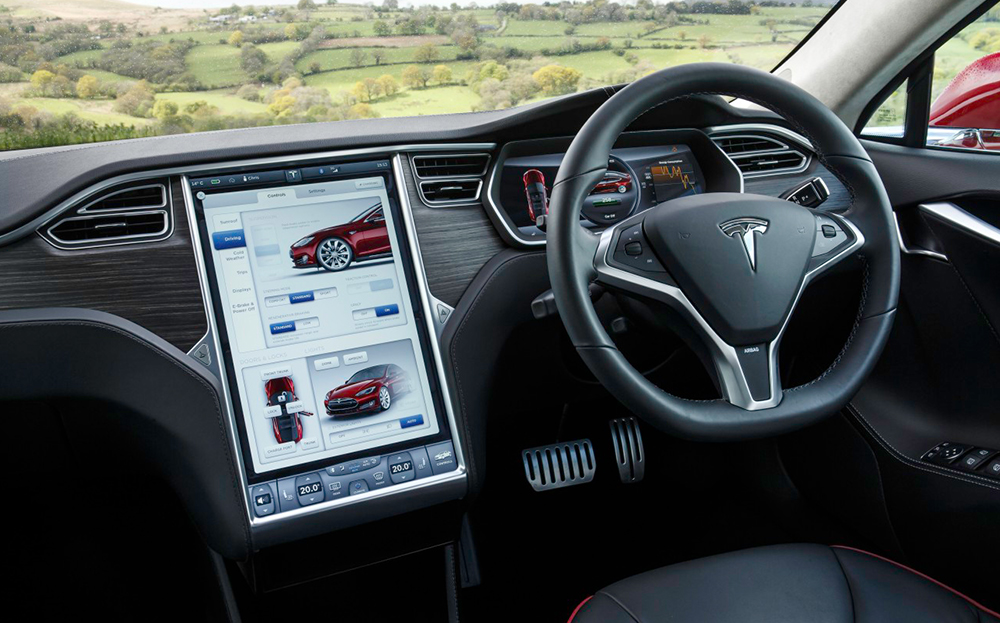 The motor is between the back wheels like a cow’s udders or a bull’s bollocks, depending on your testosterone levels. Under the bonnet there was another boot, and the boot in the boot is so big that you can have the option to have two extra backwards-facing seats. All of the seats are sporty and not terribly comfortable.

The steering is surprisingly thick and heavy given the elegance of the torque and the ride. It is, I think, what they call stiff. Well, not soft, certainly not softly commodious. I wanted to feel as though I were being wafted on clouds but I suspect there will be an app to fix that.

The battery is under the floor, and here is the rub. The Tesla is all about batteries. The model I drove promised a range of 300-and-a-bit miles fully charged and it costs about £70,000. For less money you can get one that has less range.

You can charge from empty to full in 20 minutes, if you are in one of the high-powered charging centres. You’re not. Trust me, hardly anyone is. You can stop at a service area with a socket and add about 60 miles of energy while you’re having a longish cup of coffee. Or you can plug it into a three-pin plug at home and it will charge at about four miles an hour — which is walking speed. This is the huge problem — the electric elephant sitting on the Tesla. Watching the mileage go down is a constant worry. If you have OCD concerns, this really isn’t the motor for you. And if you park on the street it’s virtually impossible to run one of these.

I drove 65 or so miles from Oxfordshire to London along dual carriageways and motorways and country roads and I started with 300 miles of range on the clock and finished with just over 200. The estimate is about as accurate as how many miles your car will do to the gallon but you don’t care about that because you know you’re always within 10 miles of a petrol pump and it takes five minutes to fill up. But to charge the Tesla to max from your home will cost you about 10 quid — which is better value than any petrol car on the road.

The cars that look and feel most absurdly obsolete are hybrids. Cars with two powerplants on one chassis. That’s just Neanderthal dumb. It’s green tokenism.

This is, undoubtedly, the ride of the future. You know when you put your foot down that everything else is so last century. And tellingly the cars that look and feel most absurdly obsolete are hybrids. Cars with two powerplants on one chassis. That’s just Neanderthal dumb. It’s green tokenism. Like being a vegetarian who eats chicken. But here’s the thing: as with all cutting-edge kit, do you want to be the first in or do you want to wait? Because it will get cheaper, it will get more efficient and there will be a lot more power points.

Already this is the most popular car in Norway. Not for its class or in its price range, but overall. Apparently it’s good in snow. And it’s the new power car to have in Los Angeles. It shows that you’re both liberal and concerned and a player in new technology or movies.

The green credentials of the Tesla are less smooth. It doesn’t give off emissions but it does get someone else to do that for it. All power that isn’t elemental or nuclear burns something. And batteries are not particularly green; nor do they have very long lives.

But this is a calling card to tomorrow. Every new combustion engine or hybrid built after the Tesla takes its place in the traffic jam of the past.