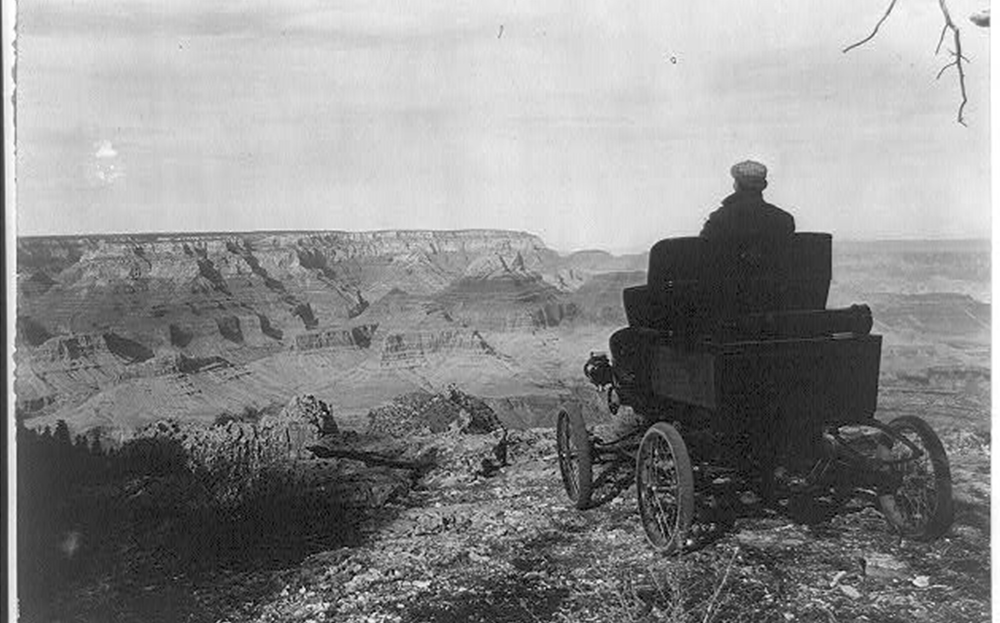 IF YOU think boiling a pan of water over a small camp fire is hazardous, spare a thought for Nick Howell, 63, and his brother Chris, 61.  Next month (August), the fearless pair will be operating a gas ring that burns a mixture of pressurised petrol and kerosene at over 1,000C, superheating water to turn it into steam.

It’s the boiler on their Toledo steam car, a rickety conveyance built in 1902 and steered by a tiller rather than a steering wheel, which they’ll be driving over rutted tracks and rocks in torrential rain ‒ on a 65-mile drive to the Grand Canyon.

Remarkably, it’s the very vehicle that did the same journey from Flagstaff in Arizona to the rim of the canyon, 112 years ago.

The original journey started as a simple plan but unfolded into a battle of man and machine versus nature. Then, the car was driven by Oliver Lippincott, a photographer and car enthusiast from Los Angeles who wanted to prove it was possible to drive the route. He was joined by Al Doyle, a guide, and Los Angeles Herald reporters Winfield Hogaboom and TM Chapman.

They thought the journey would take eight hours. In the end, it took them four days, during which they encountered “Terrible monsters we feared might bite us” and nearly died when they ran out of food, water and fuel.

Nick Howell knows full well what he’s letting himself and his brother in for, but it’s not lack of food or water, or even monsters, that bothers him‒ it’s keeping the 112-year-old steam car, which has a top speed of 40mph, running.

“Because you’re driving it like a car ‒ starting and stopping it ‒ the challenge is maintaining the boiler temperature,” says Howell. “Safety valves allow you to regulate things, but you can find the fire’s gone out when you stop.” 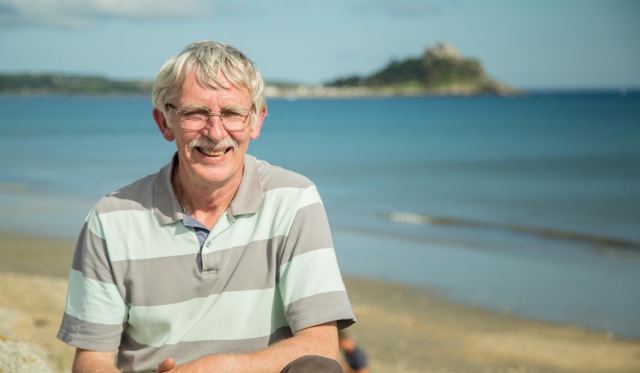 From cold, there’s bit more to starting the Toledo steam car than turning a key or pressing a button.

“It takes half an hour to get up steam. You fill the boiler, light the pilot light, build up the heat and watch the steam pressure rise to 250psi. When it’s ready to go, you move the regulator lever to open the steam valve.  The superheated steam blasts into the two vertical engine cylinders where it expands 1,700 times, driving the pistons.

“When it’s running as it should, it just chuffs away quietly. There are no clouds of smoke or steam.”

Howell was inspired to repeat Lippincott’s epic drive, the first re-enactment of the journey, after reading Hogaboom’s account in the Los Angeles Herald.  By a remarkable coincidence he’d just bought the car, unseen, in an Internal Revenue Service (IRS) sale of seized goods and vehicles. That was in 2004.

It takes half an hour to get up steam. You fill the boiler, light the pilot light, build up the heat and watch the steam pressure rise to 250psi. The superheated steam blasts into the two vertical engine cylinders where it expands 1,700 times, driving the pistons.

“I’d owned classic cars but they were a bit boring,” he says. “Some of my friends had old steam cars and I saw they were always fiddling with them, so I thought I’d buy one.”

Howell saw the Toledo steam car, one of only 14 remaining in the world, in the online catalogue for the IRS auction.

“I saw it was a 6in longer than other Toledo steam cars. The company made only one long-wheelbase version. I’d heard of Lippincott’s drive and knew his car was 6in longer, so guessed they were one and the same. I bought it straight away with the aim of repeating the 1902 drive.” 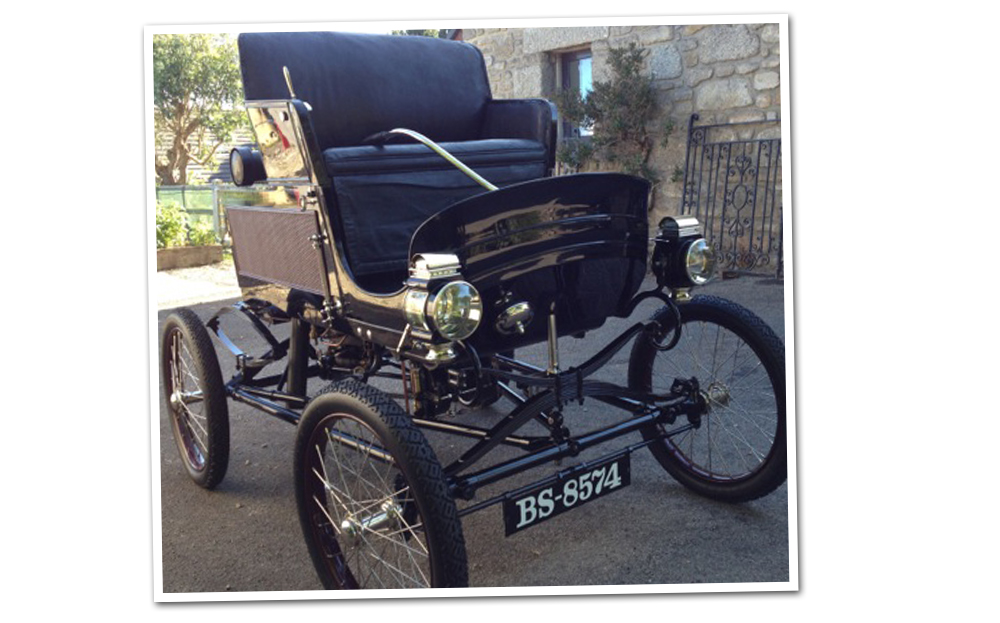 Howell had the car shipped to Penzance, where he owns a fish wholesale business, and set about restoring it.

“It was in remarkably good condition. It’s surprising how advanced the technology was in 1900. The engineers’ casting know-how was extraordinary. They had taken into consideration the prodigious heat and expansion effects on metal. It was hard finding the same level of skill necessary to restore it.”

As part of his preparations for next month’s drive, Howell drove the Toledo in the Brighton Veteran Car Run, in 2012. All was going well until the car caught fire.

“It was very intense but lasted only 30 seconds or so,” he says. “There was no serious damage but it taught me how things can suddenly go catastrophically wrong.”

With the help of the Arizona Trail Association and a detailed report of the journey to the Grand Canyon written in 1902, Howell has mapped the route Lippincott followed. Unlike the intrepid photographer, he’s had Google Maps to refer to, as well.

“The images show the route passes through large pine forests, so I’m expecting a smooth ride over a floor of pine needles,” he says, optimistically.

Howell drove the Toledo in the Brighton Veteran Car Run, in 2012. All was going well until the car caught fire.

For support, a friend may follow Howell and his brother in a pick-up, but he’s not sure. The Flagstaff All-Terrain Vehicle club is on stand-by to lend assistance if necessary.

Otherwise, Howell says they’ll be on their own.

He shipped the Toledo out to the US a few weeks ago. It’s currently off the California coast, in a container. Jay Leno, the TV presenter and columnist for The Sunday Times Driving, has offered his garage as a base to ready the car for its big adventure. He’s a keen steam car enthusiast with a small collection of his own.

Prior to the trip, Howell will show the car at Pebble Beach, one of the classic car world’s most popular shows, before, on August 26, departing Flagstaff for the rim of the Grand Canyon, two days and 65 miles away.

In his report of the journey in the Los Angeles Herald, Hogaboom told how the party “travelled through a vast forest of giant pines, an open plain past a wonderful mountain of red lava cinders, past deserted Indian villages, antelope, deer and wild horses.” 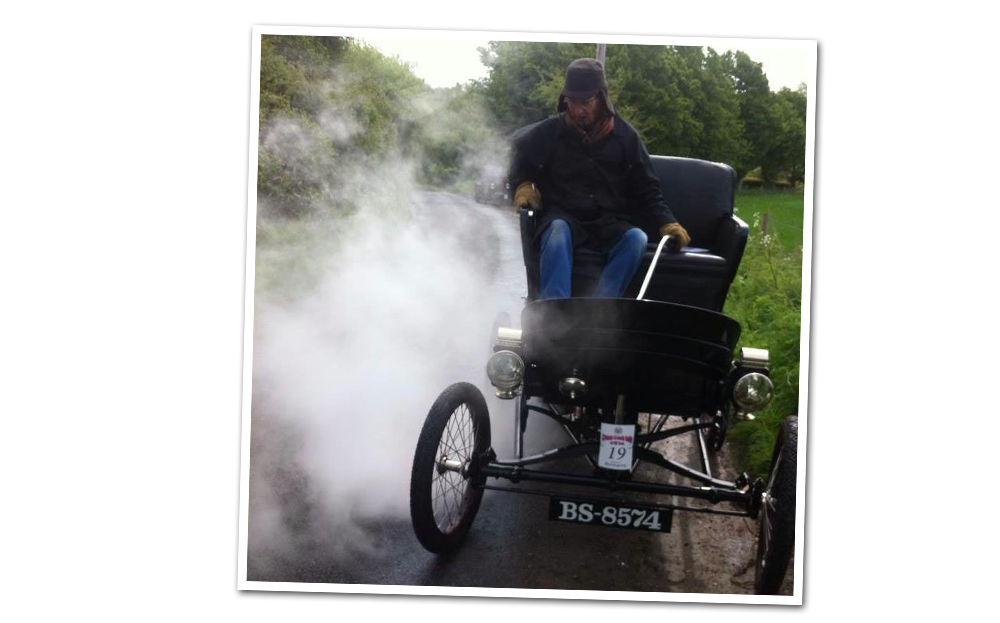 But what had started as a pleasant drive slowly dissolved into a nightmare, wrote Hogaboom.

“It was dark in the forest. Fantastic forms appeared around us – forms of bears and tigers, elephants and alligators. Terrible monsters we feared might bite us.”

The second morning he reported there was a frost and they used almost all of their fuel trying to thaw out the Toledo. The journey dragged on and they soon ran out of food and water: “I never realised how people suffered until I was forced to go two days without those things myself.”

While Howell and his brother are unlikely to experience the same deprivations, he’s not downplaying the risks.

What had started as a pleasant drive slowly dissolved into a nightmare, wrote Hogaboom: “It was dark in the forest. Fantastic forms appeared around us – forms of bears and tigers, elephants and alligators. Terrible monsters we feared might bite us.”

“It’ll be the monsoon season, so flash floods are a possibility. The brakes are either side of the greasy chain sprocket. I’ve had scary times heading up a hill when it ran out of steam. I couldn’t brake the car because it’s so heavy but it had no power to keep going and slid backwards into a post.”

Fingers crossed, Howell will be able to avoid a repeat of that but with 750kg of iron, steel and wood, not to mention a giant boiler producing super-heated steam, to control, he’s not ruling anything out.

Nick Howell has launched a campaign to crowdfund a documentary of his trip. For more details, visit https://www.kickstarter.com/projects/1080529841/steam-car-man

For the latest news of the trip visit  https://www.facebook.com/Steamcarman