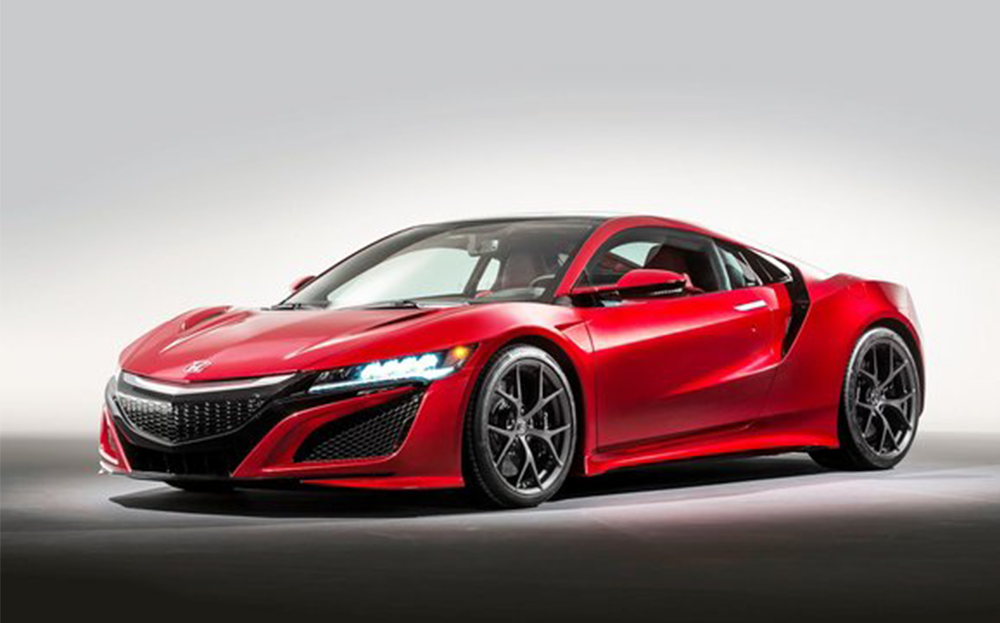 ECO-FRIENDLY, worthy and a bit dull: there was never much to stir the senses when it came to hybrid cars. Until last year, that is, when combining an electric motor with a petrol engine suddenly became more hair-raising than hair shirt.

View the used Hondas for sale on driving.co.uk

For this you can thank three of the most extreme cars in the world: the McLaren P1, Ferrari LaFerrari and Porsche 918 Spyder owe their performance figures to hybrid systems. Now you can have the same technology for a fraction of the price.

Fitted with a twin-turbocharged V6 petrol engine and three electric motors, producing a combined 573bhp, Honda’s new NSX is claimed to accelerate from 0 to 62mph in less than three seconds — as fast as the £1m LaFerrari but at £120,000 a lot more affordable.

To achieve hypercar performance, engineers fitted two motors on the front axle and another to the engine in the middle of the car, which drives the rear wheels. The front two motors operate independently and can send more power to one side for sharper cornering. There’s no pretence of environmental benefits: the 1kWh battery will barely drive the NSX a mile without help from the engine. It’s really all about performance.

Honda would only allow me and other journalists to drive on its oval test track for two laps — about five miles. But even that was enough to confirm the claims that the NSX doesn’t hang around. Hit the throttle and the V6 growls, the four exhausts pop, the tyres squeak and the car catapults across the tarmac. The speedo is a genuine blur, with just a micro-pause interrupting the wave of power as the nine-speed dual-clutch automatic gearbox changes up.

So far, so sensational. Until 110mph, that is, the speed limit for our test, enforced by a Honda technician in the passenger seat. He also prevents us from trying the car in its most extreme Track setting. Instead we have it in Sport+, in which the engine is running continuously, supported by the motors.

Sport+ also stiffens the suspension and sets the motors for more aggressive cornering, and is supposed to increase the feedback through the steering wheel, although there wasn’t much sense of grip relayed through the electric power steering at all.

Not that there are many corners to test on an oval. We created our own by swerving from left to right on the straight and the response was quick, the turn crisp and the vehicle stable. These are the ingredients that should make the car fun to drive on a B-road, although we’ll have to wait to find out how the NSX behaves away from the smooth tarmac of a test circuit.

On the fast-banked curves the car felt composed, but there was a slight jiggle from the rear, hinting that it would be amenable to some powersliding on a flatter course with some of the electronic safety aids turned off.

In Quiet mode the car uses electric power as much as possible and limits the engine to 4000rpm, so leaving your house at 6am won’t cause the neighbours to barricade your driveway before you come home.

The only gearbox available is the nine-speed unit, which makes you suspect the NSX has fallen victim to the same syndrome as the shaving industry, with its ever-increasing number of blades on razors. As electric power provides instant thrust, there’s no need to change down a gear to accelerate, so the ratios seem like overkill. When you’re half on the throttle, the car can’t always decide which gear it should be in, so it’s no wonder that when the driver takes control of the paddles, finding the right gear becomes a guessing game.

Other drawbacks include its weight, which is increased by the hybrid system. At 1,725kg, the NSX is a bit of a bruiser — almost half a ton heavier than a comparably priced McLaren 570S and 170kg more than an Audi R8 V10 Plus, despite its aluminium construction.

The interior is described by the car’s creators as an homage to its predecessor, the original NSX, which Ayrton Senna helped to develop in the late 1980s. It was the first supercar that could be used for everyday driving. Fewer than 19,000 original NSXs were sold during its 15-year production run, and now, a quarter of a century on from its launch, it is a collector’s item. No doubt this was one of Honda’s motives in reviving it.

The centre console slants towards the driver, as in the original, and when you floor the accelerator the digital rev counter flashes yellow and then red with the intensity of a pinball machine signalling a special bonus. The display feels like a throwback to the 1980s.

For my money the retro features give it character and set it apart from rivals, but overall the interior lacks the tailored feel some might expect. Despite its advanced technology, the NSX comes up short in refinement. You can imagine Tom Cruise buying this car; George Clooney less so.

It’s a price that Honda’s designers and engineers seem willing to pay in order to achieve a 0-62mph time of less than three seconds. That sets a new benchmark for a car of this type at this price, and for many it will be reason enough to buy one.