IF IT feels as though traffic congestion is getting worse, that’s because it is. The number of vehicles on Britain’s busiest roads has reached its highest ever level. The total distance travelled on our motorways in 2013 was 63.3bn miles, according to new government figures — a record and an increase of 50% in 20 years.

The upturn in traffic follows a brief pause during the middle of the previous decade caused by the recession. Now it seems traffic jams are back with a vengeance. The Department for Transport recently disclosed that in the first three months of this year traffic on Britain’s roads was 4.1% heavier than in the same period in 2012. A separate study by a sat-nav company has found that British commuters are now spending 10 working days a year stuck in traffic, up from nine days a year ago. TomTom said that the figure was likely to keep rising by at least a day a year at current rates of growth.

“The car now is a kind of nice little micro-environment, a home from home, so that does make you less likely to want to get out of it.”

Some estimates even suggest we spend more time commuting than Americans. A study from 2011 by the Organisation for Economic Co-operation and Development, a research body, found that British workers commuted for 40 minutes a day. The average American travels for 28 minutes. Long-term DfT forecasts suggest that the situation could become worse, with congestion more than doubling by 2040, without new roads.

European car makers are already responding with interior features designed to stop drivers going numb and getting bored after hours at the wheel. Mid-market manufacturers such as Peugeot and Citroën now offer massage seats on their 308 and C4 Picasso models, once the preserve of high-end cars such as the Mercedes S-class.

Car makers are not alone in catering for drivers trapped behind the wheel. Supermarkets such as Tesco and Asda have attempted to attract drivers with click-and-pay services that allow them to order their weekly shopping online and pick it up without getting out of their car. There are drive-thru banks, dry cleaners and chemists. Drive-in cinemas, made popular in America, are opening too, as Britons decide to spend more time behind the wheel.

In fact, as we prove, it is now possible to go about your daily business without once getting out of the car. According to Joe Moran, cultural historian at Liverpool John Moores University and author of On Roads, a history of driving in Britain, cars are evolving into something closer to the living room on wheels. “The car now”, he says, “is a kind of nice little micro-environment, a home from home, so that does make you less likely to want to get out of it.”

However, increased congestion is putting people off driving, according to one survey published last week. It found that, along with traffic wardens and speeding tickets, crowded roads meant that one in three drivers had never driven purely for pleasure. 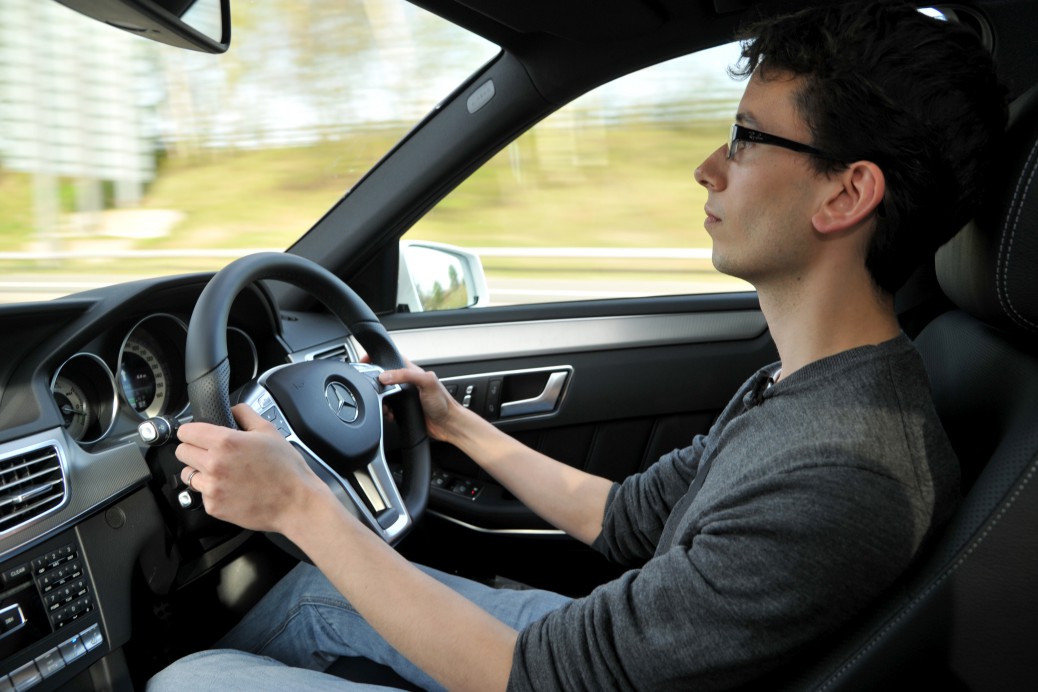 THE CHALLENGE is simple: is it possible to spend an entire day and night in a car without once setting foot on a pavement? Obviously it is physically possible, but could you do it in comfort and still go about your daily business — that means going shopping, catching some entertainment, visiting the bank and grabbing something to eat? And if you could, how would you feel afterwards? There is only one way to find out.

The first stop is Metro Bank, just after 10am, in Slough, which is a drive-thru branch featuring a window-height cash machine and a videophone to talk to the cashier. There’s a whizzy pneumatic tube to deposit cash that’s just as exciting as it was when the system was used in 1980s department stores. The drive-thru opened last year and has been a huge success with commuters and shoppers, who pull up and withdraw their cash without the hassle of finding a parking space.

Further down the road, I pull into a Shell petrol station that has an attendant, just as in the 1950s, only with hi-vis clothing and a well-rehearsed pitch extolling the benefits of the firm’s premium — and more expensive — fuel. Shell has reintroduced attendants at almost 300 petrol stations to fill up cars and offer mechanical advice. A reaction, it says, to drivers who don’t want to get their hands dirty. 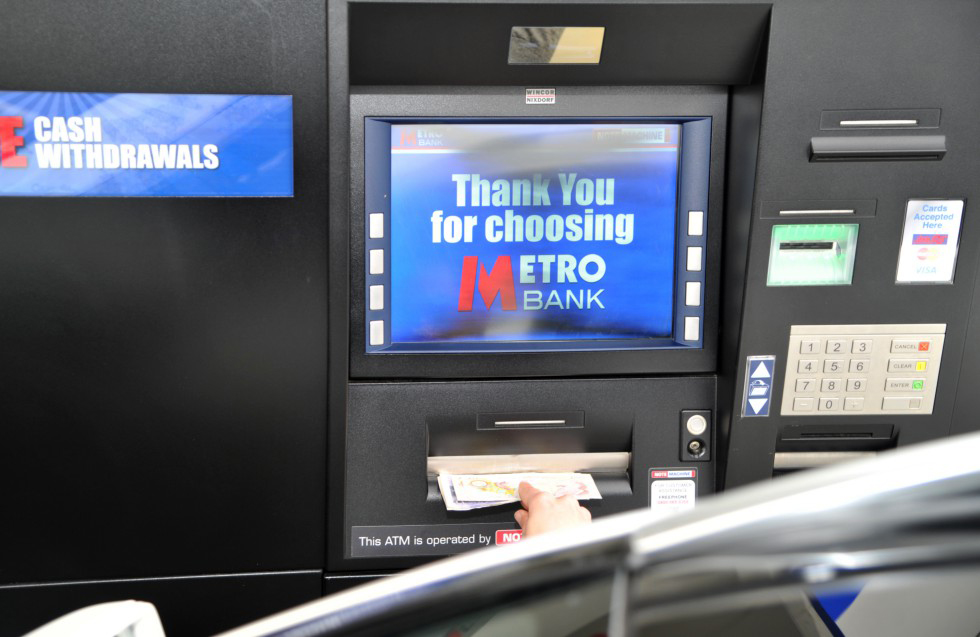 With a bulging wallet and brimming tank, I am ready for the challenge. It is now 11am and the first stop is for a coffee. Britain’s first drive-in is thought to be a restaurant that opened in September 1960: the Ox in Flames. The Chicago Tribune sent a journalist to the momentous opening event in Farnborough, Kent, where he described the waitresses, known as “car hops”, who took orders from drivers and then returned to the vehicles with trays of food. American car culture had reached England, he observed. “There were girl car hops, wearing pert short skirts,” he wrote. “One was a former Miss Britain.”

There’s nobody — in a pert outfit or otherwise — to greet me as I pull into Starbucks at an industrial-looking Milton Keynes shopping park; just a disembodied voice asking for my order from a metal pole in the ground.

Consuming the bucket-sized coffee gives me an opportunity to test a device that allows drivers to answer the call of nature in their car. Parents will be familiar with the travel potty…

It’s one of 200 drive-thrus that the chain plans to open by 2016 and Starbucks is not the only company wooing drivers to the kerbside with the scent of fresh grounds. Its rival Costa has plans for 80 drive-thru branches.

Consuming the bucket-sized coffee gives me an opportunity to test a device that allows drivers to answer the call of nature in their car. Parents will be familiar with the travel potty — a life-saver when a youngster can’t wait until the next service station. Amazon reports brisk sales of the adult equivalent — the aptly named TravelJohn . It turns out to be little more than a sealable plastic bag. I am grateful for the privacy glass in the back of my Mercedes E-class estate. 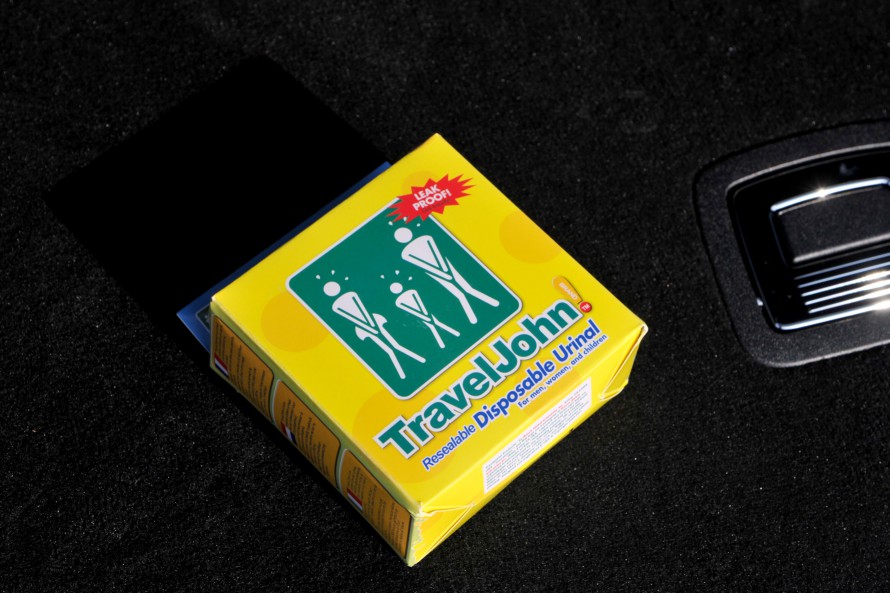 Having barely moved my left leg for the equivalent of a long-haul flight, I head down the drive-thru lane at Boots in Northampton for some advice on avoiding deep-vein thrombosis. With flight socks out of stock, I am offered some aspirin — not an ideal solution but it will have to do.

The drive-thru options become more exciting as I head further north. Burton upon Trent in Staffordshire is home to the only Johnsons Cleaners drive-thru. Pull up by the front door and an assistant will emerge, saving you parking and taking your laundry inside. You can pick up your office clothes for the week, pressed and cleaned — a real time-saver.

It is early evening now and my back is beginning to ache. The view of the road and traffic is getting monotonous through the rain-spattered window and I have the theme tune from Taxi Driver stuck in my head.

Then it is time for a spot of drive-thru gastronomy: off to Wakefield, West Yorkshire, to a fish and chip shop where you place your order without leaving your car, and then drive to the next window to collect it. Cutlery is supplied. A perfect way to eat a cosy supper, especially if it’s raining and if you don’t mind steamy windows and the lingering smell of vinegar.

It is early evening now and my back is beginning to ache despite the aspirin and the expensively upholstered Mercedes seats. The view of the road and traffic is getting monotonous through the rain-spattered window and I have the theme tune from Taxi Driver stuck in my head.

This time I am heading to Liverpool and one of the less well known cultural delights of the city: Route 66, said to be Britain’s only chain of permanent drive-in cinemas. It would be a stretch to say that drive-in cinemas are booming, but the company behind the ones in Liverpool and Manchester is planning another in Leeds.

I pull into a crescent of cars below the giant 65ft x 50ft inflatable screen. John Travolta and Olivia Newton-John twirl across the screen in Grease, with the Liver Building and city centre towers in the background. Inside the car, the stereo is tuned in, blaring out Summer Nights. 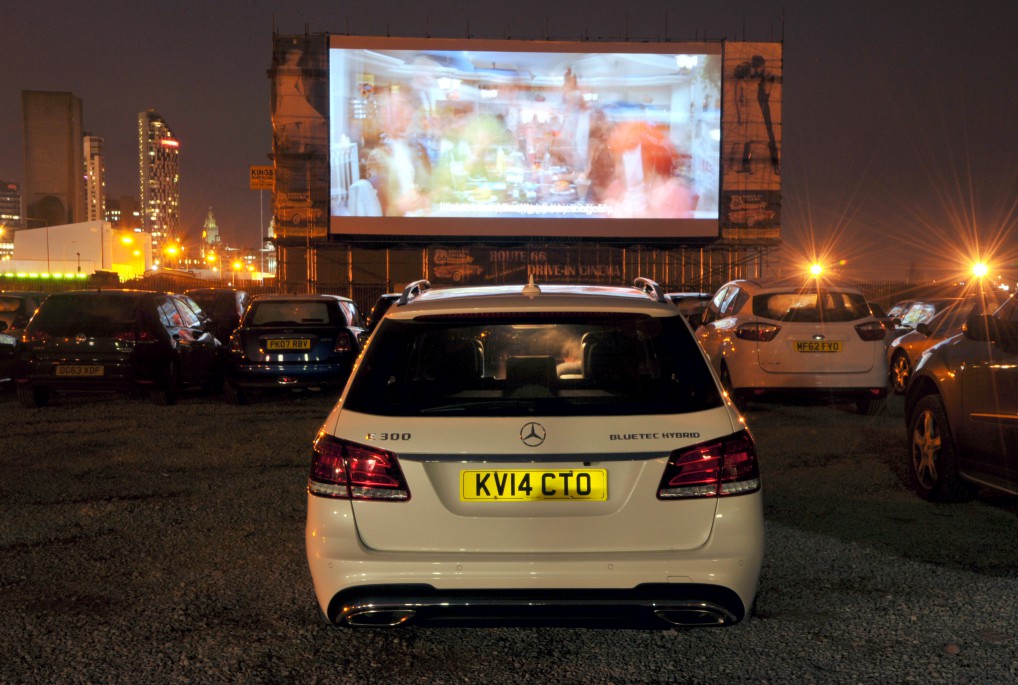 It is almost like being in the movies myself. Apart from the red glow from the car in front, whose driver cannot work out how to turn the lights off.

I leave, past a huge line of cars queuing for the next screening, and return to London for a night’s rest, with 10 hours of the challenge still left. Taking a tip from the explorer Sir Ranulph Fiennes, who often sleeps in his car to save money on hotels, I make for the most expensive part of the capital I can find: the street where Roman Abramovich used to live. It may be a five-minute walk from the non-stop bustle of Victoria station and rowdy Chelsea clubs, but the street is an oasis of calm: silent, with parking spaces galore.

Fiennes says that the wealthy residents are rarely at home, and he seems to be right: the streets are deserted. So I pick my spot by a £200,000 Ferrari, fold down the back seats and unroll my sleeping bag, not forgetting to check my emails, courtesy of an O2 mobile wi-fi device. Before long I am drifting off to sleep. 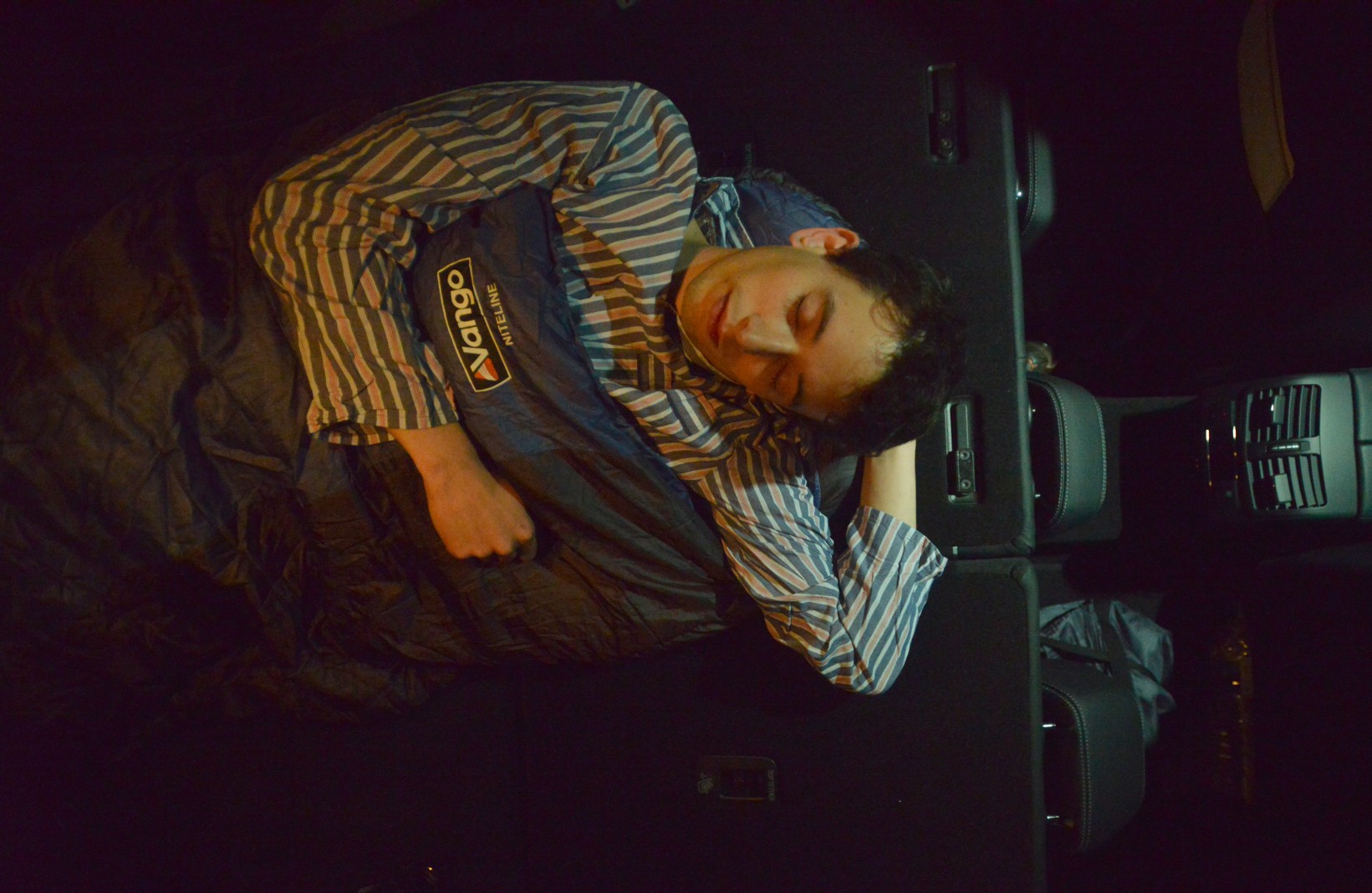 The trouble with sleeping in your car is that lie-ins aren’t allowed, especially when the sun streams through the glass sunroof and parking restrictions kick in at 8.30am, followed by a warden 30 seconds afterwards.

I set off out of town, past bleary-eyed clubbers heading home, in search of breakfast. It’s the healthy fruit option for me, with an apple-filled doughnut from Krispy Kreme, one of the first doughnut shops to open drive-thru branches. By now I am truly sick of driving and being in the car, which despite my best efforts to keep it tidy resembles a teenager’s bedroom.

The trouble with sleeping in your car is that lie-ins aren’t allowed, especially when the sun streams through the glass sunroof and parking restrictions kick in at 8.30am. I set off out of town, past bleary-eyed clubbers heading home, in search of breakfast.

But there is another stop to make: Tesco offers a grocery drop-off service for those who can’t be sure they’ll be at home for a van to deliver. Customers meet a Tesco van at an appointed time in a car park — usually next to a railway station. The service allows commuters to pick up their shopping on the way home. I drive up to a van parked at Osterley station, in west London, and my boot is loaded up.

There’s a final stop before home time: the original drive-thru. As the rollers in the automatic car wash spin over the car, I contemplate unwinding the windows and cleaning myself off as well. I’ve been behind the wheel non-stop for 24 hours without a wash — no one so far has invented the drive-thru bathroom. 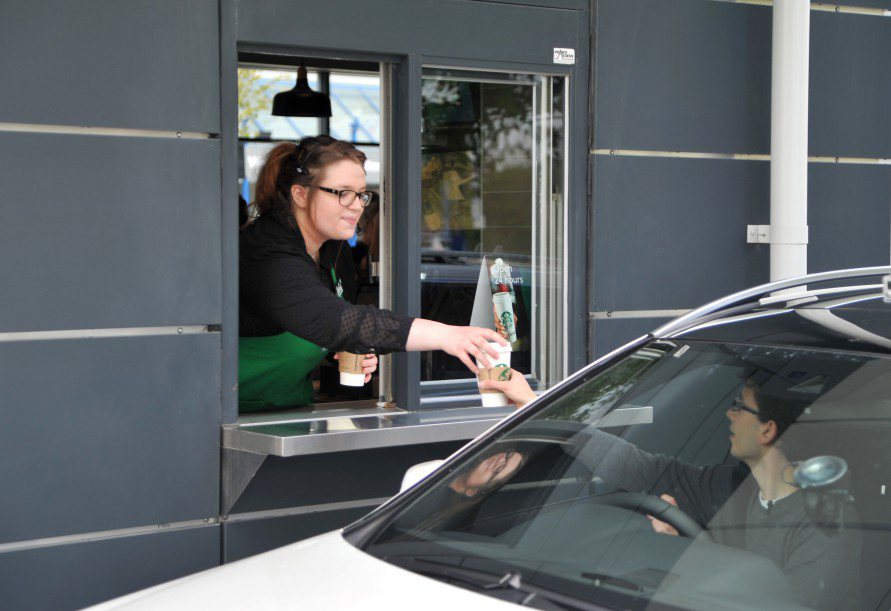