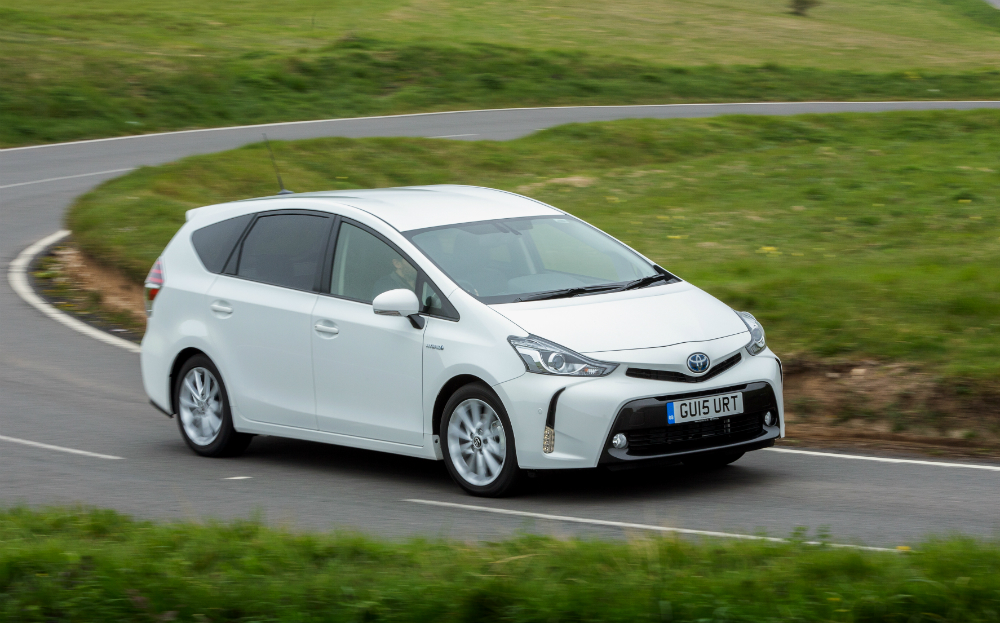 Toyota Prius+ at a glance

HOMEOWNERS CAN generally be divided into two camps. First, there are the make-do-and-mend brigade, who will treat their house to as much TLC as their home-improvement skills allow.

Browse the used Toyota Prius+ cars for sale on driving.co.uk

Eventually they’ll get to look back and marvel at their handiwork, with a large glass of wine to hand as they remember the painful hours spent with wallpaper steamer and floor sanders.

For others a newly bought house must reimagined and redrawn by a fashionable architect, gutted, rebuilt and kitted out for the next century, with heating, lighting and security systems that can be operated via a smartphone from anywhere in the world. Who cares if the end result has all the character of a mortuary?

If you recognise yourself in the latter description, the Toyota Prius+ — restyled and upgraded for 2015, and priced from a steep-sounding £26,995 — probably belongs on your driveway. 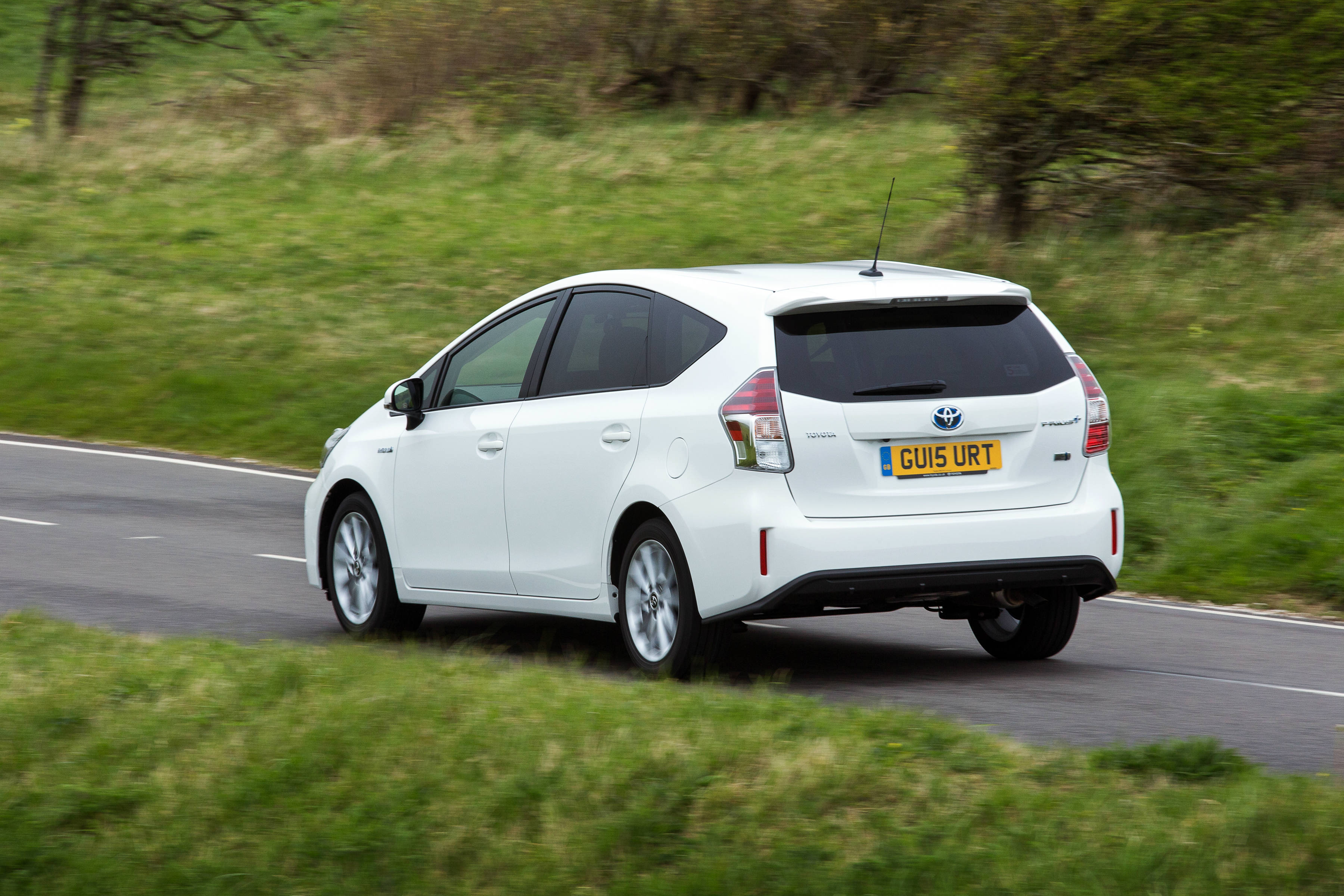 This seven-seat people carrier is trying to rip everything up and reinvent the MPV. Toyota was not content to follow the crowd and bung a diesel engine under the bonnet; it’s the only car of its kind to be hybrid-powered, using the combination of a 1.8-litre petrol engine and battery-powered motor to drag the MPV into the 21st century.

The question is, is that what drivers want? Buyers of this type of car are typically harassed mums and dads who haven’t had a night away from their children in years and want a car that will be easy to drive, cheap to run and practical to live with.

Toyota says the Prius+ will return up to 68.9mpg on the combined cycle and emit just 96g/km of CO2 — making it exempt from road tax — which is impressive by class standards. And the idea of driving around town on battery power alone might appeal to a lot of people.

The problem is, the Prius+ doesn’t get anywhere near these figures in day-to-day driving conditions, and it’s capable of only very short distances on battery alone.

Its easy enough to operate, with an EV setting for driving on pure electric power at speeds of up to about 30mph, but the hybrid powertrain badly lacks torque, so hauling along a Prius+ filled with three children, luggage and the dog leaves the car gasping and the fuel economy figures tumbling.

Worse still, the noisy CVT transmission is, to be blunt, as unnatural and horrible as eating a tub of margarine. Still, the suspension gives a comfortable ride and the car behaves itself through bends. But unlike an MPV from Ford, say, it gives no sense that it’s been engineered to be anything other than soullessly efficient. 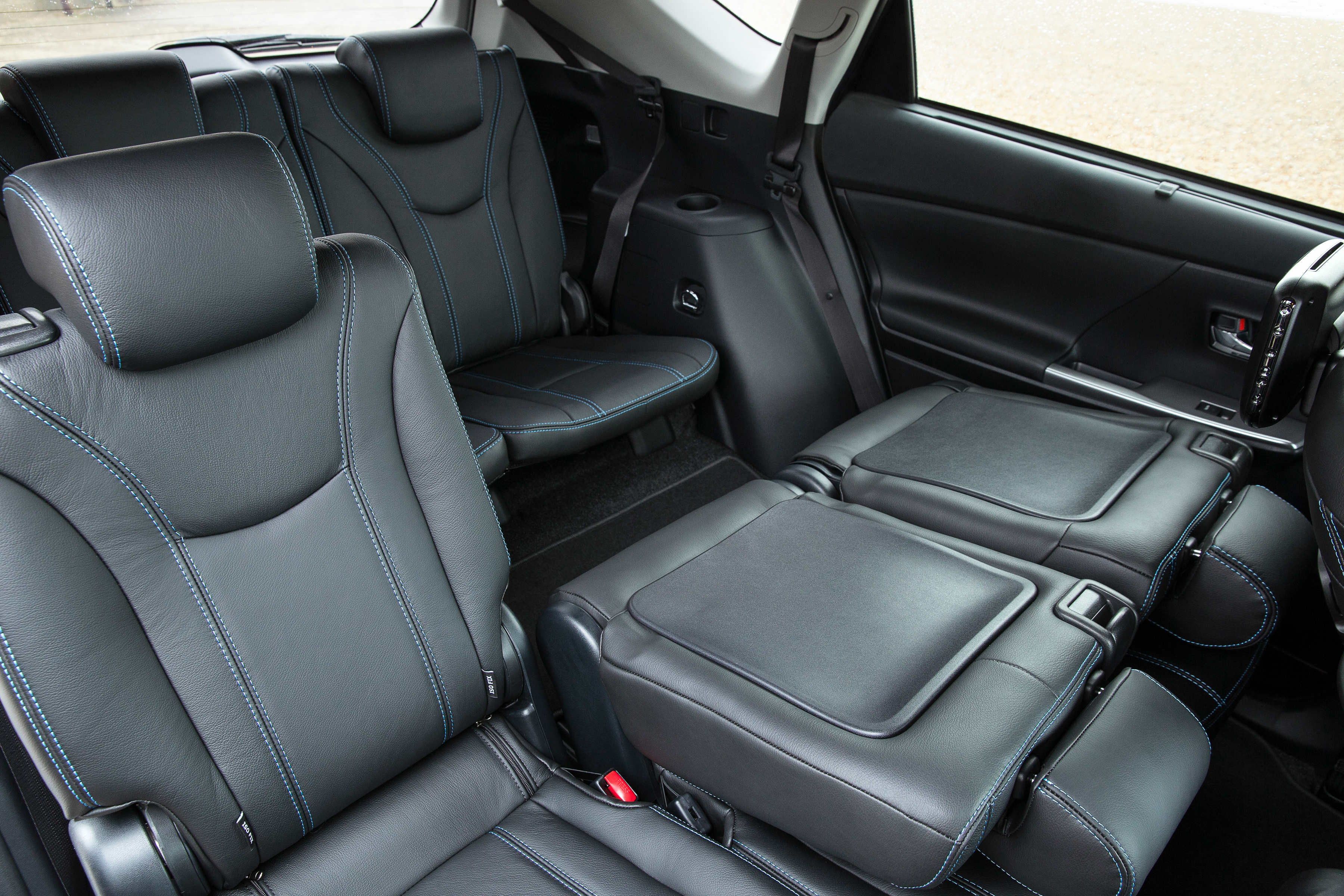 The interior – the most important part of an MPV – should make up for it. Toyota’s demo videos show a collection of immaculately presented middle-aged couples or men ferrying people to business meetings; noticeable by their absence are screaming toddlers, sulky teenagers and flying bits of food or discarded wrappers.

Fear not. The spacious Prius+ is a match for grumpy children. It has five individual rear seats. The outer pair feature Isofix mounts for child seats, and can tilt and slide forward to give access to the third row of seats, which fold out of the floor when needed. With the middle row chairs set slightly forward, there’s enough space in the rearmost seat for an adult to sit in something approaching comfort. 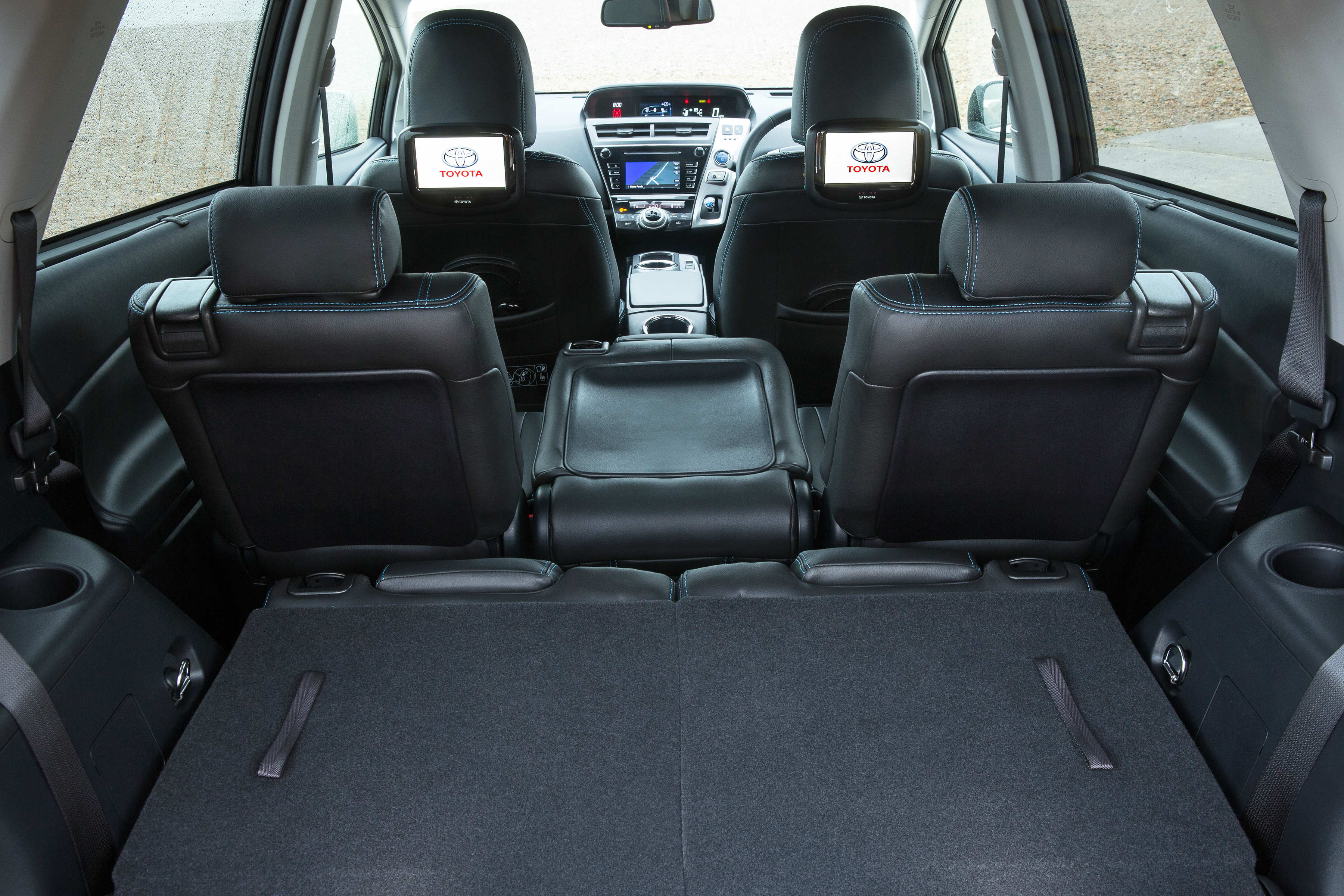 Three trim levels are available, and while the top spec Excel Plus comes with goodies such as sat nav, a pair of rear-seat DVD players and wireless headphones and leather trim, as well as tinted back windows and sunblinds for the back doors (standard on all specs), it’s a shame that there are no ventilation ducts for any of the five back seat passengers.

If you’re using just five seats, the boot is huge, holding 784 litres of luggage. If all seven seats are occupied, it’s tiny, with just 200 litres available.

The driver probably gets the rawest deal. Like the powertrain, the dashboard and its various controls are far from simple to operate. It has been designed with instruments placed in the centre, rather than dead ahead, so the driver’s eyes are off the road a lot, especially when they’re checking their eco driving score – a mark out of 100 for how economically acceleration, cruising and deceleration are managed. 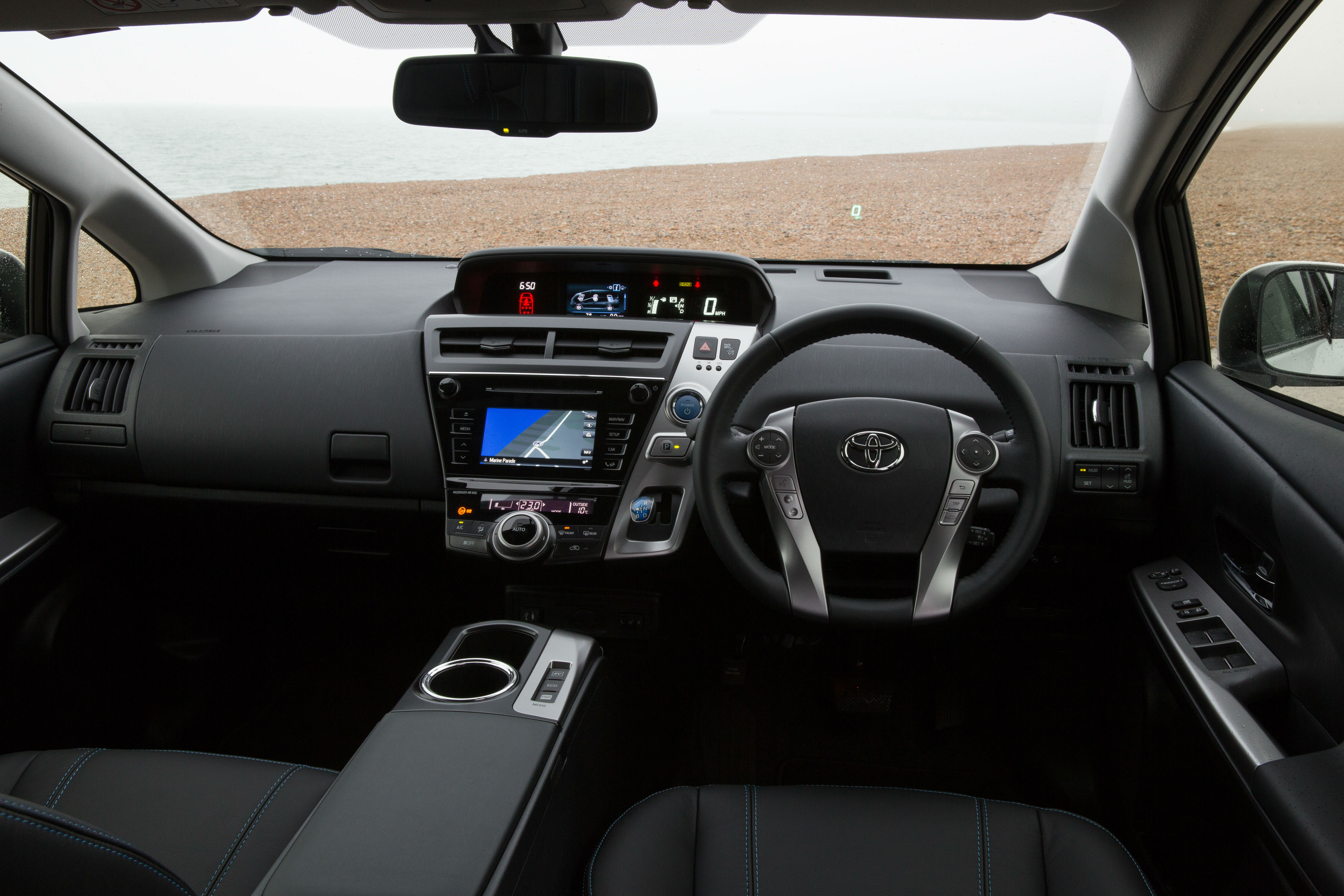 What’s more, the touchscreen control for the audio and navigation system isn’t the most simple to use, and the whole thing feels digital for digital’s sake, rather than having big, simple buttons that can be mastered without a thought.

If three children and a dog were being hauled around at my expense, I think I’d be happier with a diesel BMW 2-series Gran Tourer, Ford S-Max or Citroën Grand C4 Picasso. But then I like doing up my house bit by bit.