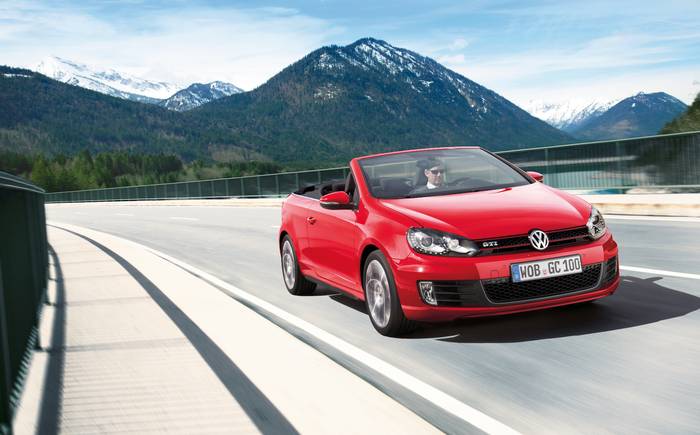 We may all harbour the dream of driving down a glorious stretch of road, on a jasmine-scented day, in a fast and beautiful sports car. But if you buy such a thing, there’s going to come a time, possibly in the middle of February, when there’s a hint of sleet in the air, and it’s cold, and you’re parked outside a hardware store and the timber you’ve just bought won’t fit in the boot.

Then you’re going to wonder, fervently and out loud, and with many expletives, why you didn’t buy something a bit more sensible. Something a bit more like the car you see pictured this morning: Volkswagen’s Golf GTI cabriolet. A car that gives you top-down sporty motoring and a boot and four seats.

In theory, this is the chocolate pudding that won’t make you fat. It’s the cigarette that repairs your lungs. It’s the gravy-resistant silk tie. And it has been that way since the first incarnation bust into the world of tanning salons way back in the early days of Mrs Thatcher.

However, do not imagine for a moment that the Golf will suit all your requirements. Because as I discovered in the run-up to Christmas, it sure as hell didn’t meet a single one of mine.

I was in London packing for a range of engagements over the festive period. I’d need a suit, my shooting things, some T-shirts for a quick trip to the Caribbean, an Elvis outfit for New Year’s Eve, a gun, some ammunition and all the usual undergarments. Plus, of course, all my Christmas shopping.

Other things that needed to fit into the car were two teenage children and their shopping. Along with all the electronic equipment needed to keep people of this age from dying of boredom on the long and arduous 55-minute trip to the country.

I’ll be honest, I’m not the best packer in the world. But compared with a teenager, I’m a professor of getting a square peg into a round hole. The pair of them made no effort, did everything wrong and there was not much festive spirit as we huffed and puffed and swore at one another. Until eventually the car was loaded.

Unfortunately the driver’s seat had to be pulled so far forwards that I looked rather like Mr Incredible. Still, we made it to the Cotswolds with nothing to report, apart from a lot of complaining, some light arthritis and a healthy dollop of cramp in my left leg.

The next day I was due to go shooting. And there’s a rule here. Your car must be the colour of mud, equipped with four-wheel drive and have good ground clearance so that it can handle all the rough tracks and slippery grass. A white Golf GTI convertible fits the bill in no way at all. I may as well have turned up in a motorised mankini.

Nor did it work for taking the dogs out on a Christmas Eve walk, or going to the garden centre to pick up a tree, or for making sure the pheasant feeders were full. Collecting logs? Running a family to the station? Taking rubbish to the dump? All of these simple, mundane things were beyond its cramped rear seat, its tiny boot and its low-profile tyres.

So what about the roof, which slides away electrically in just 9.5 seconds? Nope. Useless. Because, as you may remember, the run-up to Christmas was marked by some of the wettest weather Britain has seen. On the roads, only submarine commanders felt completely at home.

The car didn’t really work as a style statement either. Because there was a time when a white convertible was just the thing. But now? Turning up in a car of this type is like turning up with a Wham! days George Michael blow wave.

There’s a similar problem on the inside because it has the sort of upholstery used to make jackets for German newsreaders. VW will tell you it’s a nod to traditionalism since it’s the same material used to line the seats in the original Golf GTI. But what’s the point of resurrecting something no one remembers or cares about?

What we have here, then, is a car that appears to be a mass of fun but still has one eye pointed in the beige-infused, drip-dry direction of common sense. It sounds good but actually it’s like a leather-soled training shoe. The worst of both worlds . . .

Because as a sports car it’s not much cop either. I have always been a fan of the Golf GTI. And I’m very much looking forward to trying the new version, which will be the same as all the others; a no-nonsense blend of hard-charging speed and dog-in-the-boot practicality. It doesn’t really matter who you are or what you do, a Golf GTI is the answer.

Take off its roof, though, and it all goes a bit pear-shaped. Not only do you lose a lot of interior space but also you have quite a lot of scuttle shake; a sense that the front of the car and the back aren’t connected quite as well as they should be. Which is true, of course, because whereas in a hard top, you have a sheet of steel joining them together, in a cabrio you only have a bit of canvas.

And to make up for the lack of rigidity, engineers are forced to fit many strengthening beams. Which a) add weight and b) don’t really mask the problem. So the Golf cabrio is like a normal Golf in the same way that Anne Boleyn after her beheading was like Anne Boleyn when all her bits were still joined together.

And it gets worse because although the roof has many layers of fabric and fits with Germanic precision, you still get a fair bit of extra noise. Which is annoying when you just want to listen to the radio and go home.

In various other ways, the GTI cabriolet is very good at this. It has a delightfully easy-to-use command and control setup. The seats are very well- thought-out, offering both comfort and support in all the right places. And its ability to deal with speed bumps and potholes is exemplary. Plus it is fast.

But I couldn’t live with the drawbacks and that is neither the end of the story, nor the end of the world. Because the Golf I tested was £30,765 and for around £2,500 less you can have exactly the same car with far fewer problems. It has the same 207bhp engine, the same suspension, and the same seats, comfort and ease of use. It’s made by the same company and it’s called the Eos.

This comes with a folding metal roof, which is more rigid and better able to protect you from the elements and all their noises. Sure, it’s not as practical as the normal Golf, but for walking the fine line between sports car motoring and everyday usability it’s not bad at all.

But here’s the clincher. The Golf cabrio really does have a whiff of fake tan about it. I think it may even have the ghost of Duran Duran in its genes. But the Eos does not. The Eos is exactly what you want and expect from VW. A simple, clean blend of well-made anonymity.

Plus, with an Eos, you don’t get a sense that it’s only been made to use up the last of the Golf bits and bobs before the new model arrives next year.

Soft in the head.