Share Article
One Panamera, there’s only one Panamera. Thankfully
Pros
More economical than the old V8
Cheaper than the V8
Same delightful centre console
Cons
It's enormous
The drive? Well, it moves...
Visual appeal of a gargoyle
Cars > Porsche > Panamera 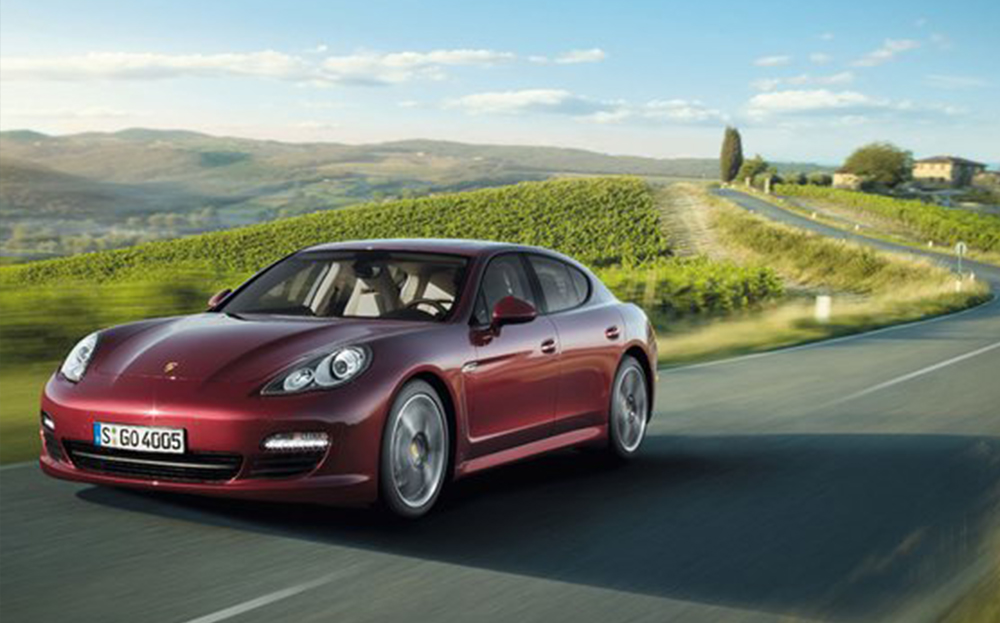 I DON’T like marzipan. I’m aware that it is categorised as a foodstuff and that you are supposed to put it in your mouth and move it about and swallow it, but honestly, I’d rather lick the back of a dog. I don’t like kidney beans, either. Or Piers Morgan. I know that he has a nose and a liver and all the other things that qualify him to be classified biologically as a member of the human race but he grates, and I find myself gloating in an unkind way over the true fact that his new television show now has fewer viewers than Kerry Katona: The Next Chapter.

We all have likes and dislikes and it’s often hard to find rational explanations. I don’t like whisky, for instance, and I can’t understand why. Everybody else I know likes it but as far as I’m concerned each sip is a nose-busting reminder that in the morning I shall wake in a puddle of sick with a headache. It’s the same story with calvados. And Surrey. I have many friends who live in its dingly dells. I even work there one day a week, but each time I visit, I am consumed with an irrational need to leave again as soon as possible. It’s strange.

Search for and buy a Porsche Panamera on driving.co.uk

Nearly as strange as my unbridled hatred of Marks &amp; Spencer. It is a proud boast that in all of my life, I have never bought anything from M&amp;S even though I am aware that its clothing is well made and its sandwiches are nutritious and delicious. I think I don’t like it because of the flooring or because I have it in my head that everyone in the queue for the tills is going to be a magistrate with firm home county views on youth crime and bad language. But I can’t be sure because I’ve never been through the door.

Strangest of all, though, is my dislike of Porsches. I joke that my hatred of the 911 stems from the simple fact that both Richard Hammond and James May have one. But this, if I’m honest, isn’t it. I haven’t liked these arse-engined Hitler-mobiles since way before Hammond was even born. This is annoying because in many ways a Carrera 2S would be almost completely perfect for the life I lead and the driving I do.

It is easy, of course, to say that I prefer the excitement of cars from Italy, but in truth, and on a wet Tuesday morning in February, a Lamborghini Gallardo or even the magnificent Ferrari 458 would drive you absolutely bonkers. They are pantomime dames: fun when you are in the mood, but the booming and the palaver would quickly drive you insane when you were not. The Porsche is not like that. You can drive a 911 in the same way as you drive a Ford Mondeo — quietly, to the shops, where its relatively small size means it is easier to find a parking space.

What’s more, provided you avoid the silly high-performance versions that have scaffolding in the back instead of seats, you can take the kids along, too. And not only can it handle family duties, but it is electrifyingly good fun to drive when the road is empty and it’s just you and the sun is shining and you fancy getting a move on. Plus, it is built by people who are German, which means it is likely to be 15 times more reliable than a Swiss pacemaker. So. It’s a great car. A brilliant car. A perfect car for the man who wants everything. And compared with all the competition, it’s not even that expensive. But I don’t like it. Wouldn’t have one in a million years.

It’s not like I have a problem with the Porsche badge. I loved the old 928 and the 944 and I may be the only man alive who has publicly professed a fondness for the 924 — even though it was propelled along by the engine from a Volkswagen van and was, as a result, slightly slower than continental drift.

However, I do have a problem with the current offerings because the Boxster is a palindrome, the Coxster is stupid, the Cayenne looks like a 911 with elephantiasis of the underparts and then, sitting on top of this festering pile of aesthetic dreadfulness, we find the car you see in the pictures this morning — the Panamera.

You can see what they were trying to do. To make a big, comfortable four-seater with a family resemblance to the 911. The spine of Porsche’s reason for being. This might, just, have been possible had they employed a stylist who actually knew what he was doing. But, unfortunately, it seems they chose instead to give the job to a committee made up of the man who did the Ford Scorpio, the man who did the Pontiac Aztek, Ray Charles and some lunatics. It is the ugliest car on the road today. This is annoying because, underneath, it’s not that bad to drive. I recently tried the four-wheel-drive turbocharged V8 and, my God, it was fast. And a nice place to sit as well. Partly because of the tall centre console and partly because from behind the wheel you can’t see it. If only, I thought, they’d restyle the ruddy thing, this would be a cracking car. A genuine rival to the Aston Martin Rapide and the wonderful but fragile Maserati Quattroporte.

Instead, however, Porsche has chosen to make its gargoyle slower. I can’t quite understand the logic behind this move because I cannot imagine that anyone has spent the past couple of years thinking: “Hmmm. Yes. I’d buy one of those Panameras if only the damn thing wasn’t so fast.” The gearlever feels like one of those toys McDonald’s gives when you buy a Happy Meal Of course, the new model is much more economical and far cheaper than the V8, but in base trim with rear-wheel drive and a six-speed manual gearbox, it’s still £62,783. And that kind of money buys an awful lot of 5-series.

Still, if you don’t like BMWs and Audis and Mercs, and you are impervious to bad design, you might be interested to know more. So, you get a 3.6-litre V6 that develops 295 horsepower and that’s enough to make the car move about. You can also have a seven-speed double-clutch gearbox that is just like all the other modern double-clutch boxes — ponderous and dim-witted at low speeds in town. Like the Mercedes SLS, this is not a car that can be used to exploit gaps in traffic.

There’s another problem, too. It’s enormous. To get through the width restrictions on Hammersmith bridge, ooh, you have to breathe in. But the worst aspects are the interior fixtures and fittings. The gearlever feels like one of those toys McDonald’s gives your children when you buy a Happy Meal and the electric window motors sound as if they’ve been asked to move a mountain. I know it is a well-made car but it doesn’t come across that way. And it really isn’t exciting or special to drive. You pay a premium to have a Porsche and you should be rewarded with a “feel” that you don’t get in mass-produced cars.

In the V6 Panamera, though, you don’t. Yes, the centre console is still delightful and the driving position is perfect, but the ride and the acceleration and the steering — they’re flat. They’re inert. They’re Korean, almost. Still, all this means I can at least be rational in my conclusion. I don’t like it because it’s not a very good car.

Search for and buy a Porsche Panamera on driving.co.uk