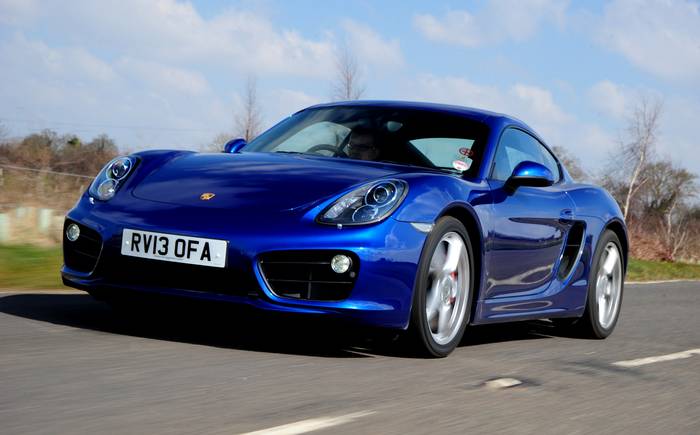 Porsche’s biggest problem is that it doesn’t seem to employ any stylists. The 911 was created after someone accidentally sat on a clay model of the Volkswagen Beetle, and every single version that has come along since has looked exactly the same.

Enthusiasts of the breed point at new door handles and headlamp clusters and say these subtle changes alter the whole appearance of the car. But that’s like saying Tom Cruise’s eyebrow wax makes him look completely different. It just doesn’t. It makes him look like Tom Cruise with new eyebrows.

Search for and buy a Porsche Cayman on driving.co.uk

My colleagues on Top Gear always refer to the various 911 incarnations by their model numbers and say the type 993 wasn’t as good-looking as the 996, and the 997 doesn’t have quite the right stance. To me it’s like looking at a field full of babies. No matter where in the world they come from, they are all the same.

Porsche’s designers had a stab at something new and different with the Boxster but, having created a front end, they were so exhausted by the effort that they simply fitted exactly the same thing to the back. Were it not for the colour of the rear lights, this car would look exactly the same going forwards as it does in reverse.

And then we have the Cayenne, the big off-roader. This has the nose of a 911 and the rest of it looks as if it’s melted.

I suppose the trouble is that when you are a small company, and you can afford to launch a new car only every 300 years, you can’t really employ a big styling division full of bright young things in polo neck jumpers and thin glasses. Because most of the time they’d have nothing to do. Except apply for a job with General Motors. We see the same problem with Aston Martin, which designed one car back in the 14th century and is still making the same sort of thing today. At least that first car was pretty — which is emphatically not the case with Porsche’s squashed Beetle.

All of this brings me on to the Cayman, which, in essence, is a Boxster coupé. The first effort looked, as you may have guessed, like a Boxster with a roof. It looked as though I’d designed it. And anyone who bought it was saying one thing very clearly: “Hey. I can’t afford a 911.”

But now there’s a new Cayman and it no longer looks like a Boxster with a roof. It looks like a 911. Still, at least passers-by will no longer clock you as a man hanging to the bottom rung of the ladder. Only very keen Porsche enthusiasts will spot that it isn’t a 911, and you don’t want to be talking to those people anyway.

I have to, in a professional capacity, and what they’re saying is interesting. They’re saying that the latest 911 has lost some of the brand magic. That it’s no longer as sporty or as involving as it should be. And that actually the much cheaper lookalike Cayman is much closer in spirit to the original dream.

I don’t know about any of that but what I can tell you is that my test car, an S version, really was the most lovely colour. It was a deep, rich metallic blue. It’s the best colour I’ve seen on any car.

I can also tell you that, as a sports car, the Cayman S is simply spectacular. It seems to flow down the road the way honey would flow over the naked form of Cameron Diaz. Only faster.

The steering and the brakes and the feel through the seat of your pants are all exactly as they should be. And then there’s the engine: a 3.4-litre flat six mounted just behind the cockpit. Not over the rear bumper, as it is in a 911.

This creates not just an innate sense of balance but also a surprisingly large amount of oomph. And it’s all accompanied by a noise that’s never intrusive or showy but is always there, in a deep, quiet, reassuring way. It’s like driving along with Richard Burton in the boot, endlessly complimenting you on your clothes and your hair and your driving style.

We can wax lyrical as much as we like about the sporting prowess of cars such as the Jaguar F-type and the Lotus Elise and the Mitsubishi Evo. But all of them are left shivering in the cold, hard shadow of the Cayman’s magnificence. It really is that good.

Which of course is all very well when you are on the road from Davos to Cortina and the sun’s just coming up and everyone else in the world is in bed. But what about when you’re in Rotherham and it’s rush hour and you’re knackered and you just want to get down the M1 as comfortably as possible?

Things begin well. The Cayman has two boots, which means it can swallow a surprisingly large amount of luggage. It has a roomy cockpit too, full of nice touches. The satellite navigation is easy to program, the air-conditioning works nicely and, joy of joys, there isn’t a single button on the steering wheel. It all feels simple and unthreatening. As long as you stay away from the G-meter and the idiotic lap timer.

It also has surprisingly compliant suspension. Yes, it crashes a bit at low speeds on a badly maintained town centre high street. But once you’re above 30, it’s like a limo.

There’s a lesson here for every car maker. If you make the chassis stiff, the suspension doesn’t have to spend half its time masking deficiencies. It can concentrate on isolating occupants from potholes. Of which, in Rotherham, there are many.

Of course, you can ruin everything by engaging Sport mode, but if you leave that alone, and avoid the 20in wheel option, you’ll be fine. And you’ll be doing 30mpg in a car that costs just £48,783.

However. I’m afraid I arrived back in London in some discomfort, which is the British way of saying “screaming agony”, because of the bloody seats. The shoulder bolsters are too close together, which means you get some idea of what it might be like to be a letter inside an envelope. Even this morning, after eight hours of deep sleep, my neck feels as though it’s spasming.

There are other irritations too. The cupholder system is needlessly complicated, and, no matter what you do, tins entrusted to the receptacles always rattle. And then there’s the gearbox. I had the double-clutch system, which costs an extra £2,000, and for the most part it’s very good. But at slow speeds, in Auto mode, you sense that a computer program is keeping you going, rather than neat mechanical design. In a sports car as pure as the Cayman, I think a manual is more in keeping.

That really is a tiny criticism, though. And I probably wouldn’t have mentioned it at all if my neck didn’t hurt so much.

Which brings me on to the final point. When I have finished writing this, I must drive the Cayman to Oxfordshire. With decent seats, that would be something I’d relish. But it doesn’t have decent seats, so I’m rather dreading it.

Search for and buy a Porsche Cayman on driving.co.uk