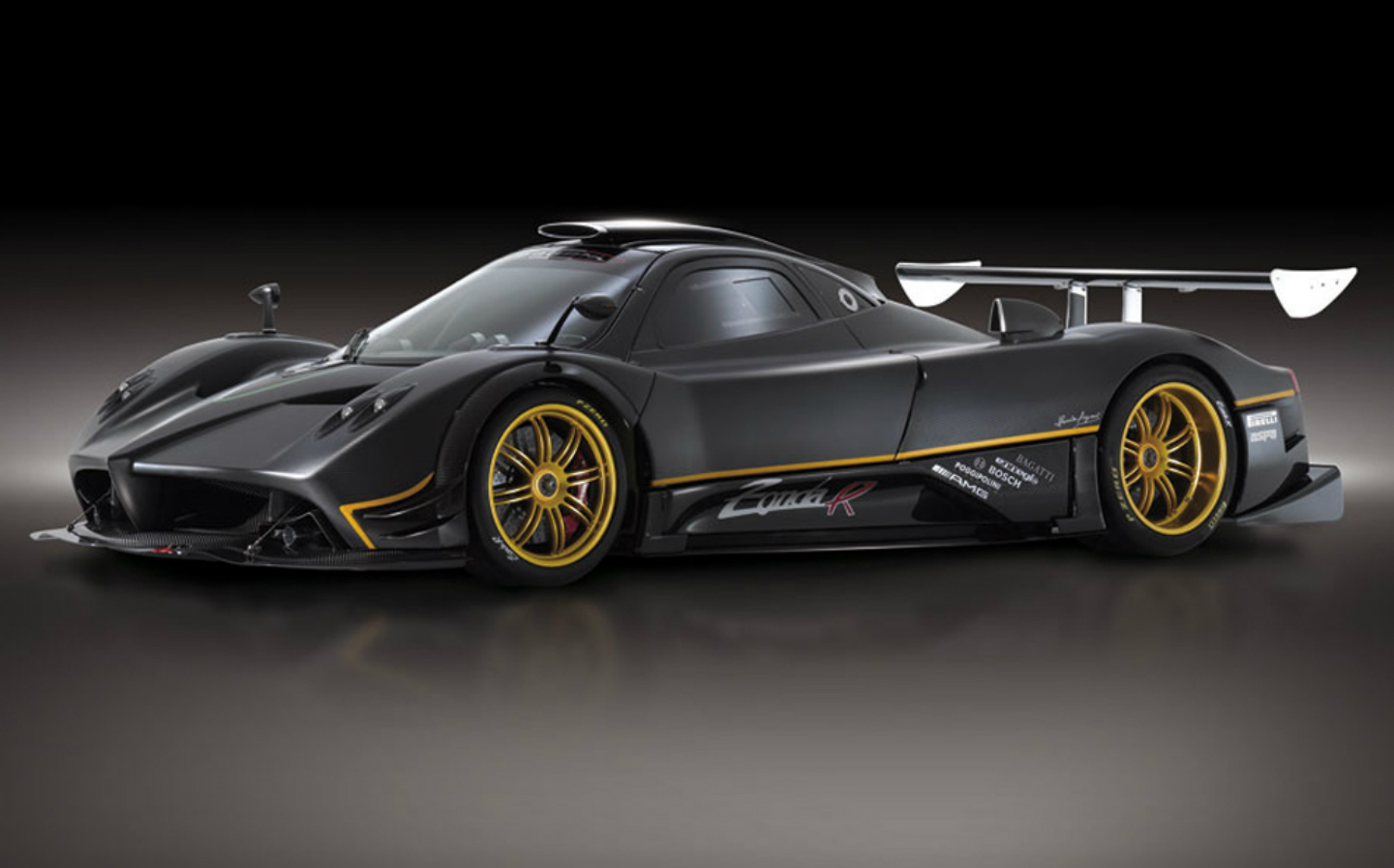 Share Article
Perfectly pointless
Pros
Louder than thunder
Surprisingly easy to drive
Faster than your brain can comprehend
Cons
Useless as a road car
Not built for racing, either
Who'd spend £1.3m on a toy? Actually...
Cars > Pagani > Zonda

AS IT’S time once again to make my Christmas DVD, I have many cars to play with. They are as follows: a Mercedes-Benz SLS AMG, a Ferrari 458 Italia, a Ferrari 599 GTO, a Porsche 911 GT3, a Porsche 911 GT3 RS, a Lamborghini Gallardo LP 570-4 Superleggera, an Ariel Atom 500 V8 … is your mouth watering yet? Well, swallow hard, because I haven’t got to the cress on the prawn cocktail yet. The Pagani Zonda R. The car that has just destroyed the lap record at the Nürburgring.

The place that’s been chosen as the playground for these snarling, bewitching rocket ships is the Enzo and Dino Ferrari circuit at Imola, Italy. And Imola is not like any other track. It’s frightening on a bicycle, scary in a bus and bite-the-back-of-your-hand-then-faint-in-a-puddle-of-your-own-bodily-fluids terrifying in any sort of car, leave alone a 200mph missile such as a Zonda.

I went round first of all with a racing driver who’d learnt his lines from playing computer games. “That’s where Senna was killed,” he said as we flashed through Tamburello. And that’s where a mate of mine stuffed his Porsche the other day and that’s where Ratzenberger had his crash. I wasn’t really concentrating on where the track went. I was just crapping myself.

The number of drivers who’ve had big ones at Imola beggars belief. Type it into YouTube and you’re presented with a never-ending stream of broken metal, tyre smoke, debris and fire. Remember when Gerhard Berger smeared his Ferrari along the wall and then burst into flames? That was Imola. Remember Barrichello being airlifted to hospital, unconscious. That was here, too. Villeneuve’s monster? Imola. It’s the graveyard of everyone’s ego, and then of course at 2.17pm on May 1, 1994, it became the actual spot where Senna lost his life.

Since then it’s been neutered a bit but it is still almost unbelievably dangerous. You come out of the last corner onto the pit straight and you floor it because you always floor it on a pit straight. But at Imola the straight isn’t actually straight. It’s bent. So you make one right, and then another, and then you are still flat out as you go left towards the rather pathetic shrine at the point of Senna’s impact. At this stage, in a car such as the Mercedes SLS, you are doing 165mph. And it’s moving, shifting about on its suspension mounts, wriggling like a bored child. You feel too that it’s trying to peel the tyres from its rims and you know you can’t brake until you are going in a straight line, but at Imola there isn’t one.

What makes the experience doubly unnerving is that the run-off area is nothing like the 900 acres of gravel you get in Abu Dhabi or Silverstone. It’s just a few yards … and then there’s a wall. The wall Senna hit. The wall Berger hit. The wall Alboreto and Piquet and Patrese hit. The walls at Imola hem you in because the circuit itself is hemmed in by the town after which it’s named. It’s not a street circuit. But there are houses everywhere and more walls and then, on the back straight, there are trees — those big, solid Mediterranean poplars flashing by as you climb once again to 165mph.

There’s a safety fence here, of course, but since it’s actually nailed to the trunks of the trees, it’s hard to see how it could make things better. It’s just another place where you can’t take risks. And what makes the claustrophobia so stark is that Imola is fast. Even with its chicanes, there are still many, many corners where your peripherals are blurred all to hell.

It wasn’t built for the road, which frees it from the need for indicators and tyres with some tread. It was built purely for speed

Piratella. Rivazza. Villeneuve. You hammer through them, not so much driving as praying to God you’ve got it right. Because if you haven’t, you’re going off. And if you go off, you’re going off fast, into a wall or a tree or a house. Small mistakes at Imola hurt. Big ones kill you. I absolutely loved it. Most racetracks these days are built to be safe. Imola was plainly built to be the exact opposite. Dangerous. Exciting. Challenging. I liked that. And there’s more. At other tracks, people who live nearby ring the council to complain about the noise. At Imola they come from all over town and press their noses against the fence. Urging you to take every corner with a little more vim.

I spent three days pounding round in all the normal 200mph cars. Until eventually I had the confidence to give it a bash in the fearsome Zonda R. This is an extraordinary machine. Despite appearances, it wasn’t built for racing. And this means it doesn’t have to comply with any tiresome sporting regulations on engine size, wings and so on. However, it wasn’t built for the road either, which frees it from the need for indicators and tyres with some tread. It was built purely for speed. For people who want to spend £1.3m on a toy.

But as it fires up, another question rears its head. Most tracks have noise restrictions. And if you turn up with a Zonda R, they are going to send you straight home again. In many ways, then, it’s a toy you can’t play with. Happily, though, they like noise in Italy, and as the 6-litre AMG V12 — lifted from German DTM racing — burst into life, everyone who had been pressed to the fence ran away, imagining that some thunder had come to their little town.

Horacio Pagani, the founder of the company, was actually on hand to talk me through his amazing creation. “It’s very easy to drive,” he said. Yeah, right. Normal Zondas are indeed very easy to drive — much easier than the space-age shape would lead you to believe — but the R shares only 10% of its components with the road cars. It has 3,270 new parts, including a carbon-titanium tub and an Xtrac magnesium gearbox. It’s like a racer, then.

But as you climb inside, you realise it isn’t. The engine cover is held on with leather straps. The door pulls are leather as well. There is style here, then, but you tend not to notice because you are doing up the belts on a car that weighs 1,070kg — the same as a Mini — but that produces 740 horsepower. These figures are from science fiction.

Pull the right-hand paddle, the gearbox snicks into first, apply some pressure to the throttle and the car pulls away cleanly, with no drama or histrionics. Into second and third and the pit lane is over. So, fourth for the first burst of acceleration. We don’t want to overdo it. Holy cow. That engine has the torque of an electric motor. It’s none … then it’s everything, so even in fourth, starting at 40mph, the acceleration is sensational. Do it properly and you go from 0 to 60 in 2.5 seconds.

Flat out? They’re not sure, but they reckon 220. All I can tell you is that on my first lap I came down the bent straight at Imola doing nearly 200 and it was rock solid. Planted by all that aero. Brakes? Extraordinary. Then ping, ping, ping, down through the box and into the chicane, 10mph, maybe 20mph, faster than I’d managed in any of the other cars, and, thanks to the bespoke Pirelli P Zero slicks, I was a full two yards from the rumble strips on the exit.

I cannot say how fast this car goes round corners because my mind kept telling me that it would be impossible. As a result, I began to see what Mr Pagani was on about. It is easy to drive because no matter how fast you go, you sense it’s twiddling its fingers and yawning. Let me put it this way. Its 6min 47sec blitzkrieg of the Nürburgring was only its second lap. And the driver had never been in the car before. So, 6min 47sec is just the starting point.

The only other car like this is Ferrari’s FXX, which I have not driven. In the hands of Michael Schumacher it lapped the Top Gear test track in 1min 09sec. Will the Zonda R be faster when it comes over in September? Mr Pagani looked bemused that I’d pose such a silly question. “Yes,” he said. “Much.”

I absolutely adored the R. Not just because of the madness of the thing and its uselessness. But because when you drive it, especially at Imola, you know what a car could feel like if it were unshackled from the bothersome business of potholes, rain, traffic, rules and legislation. For one glorious day, it was like dipping my toe into utopia.