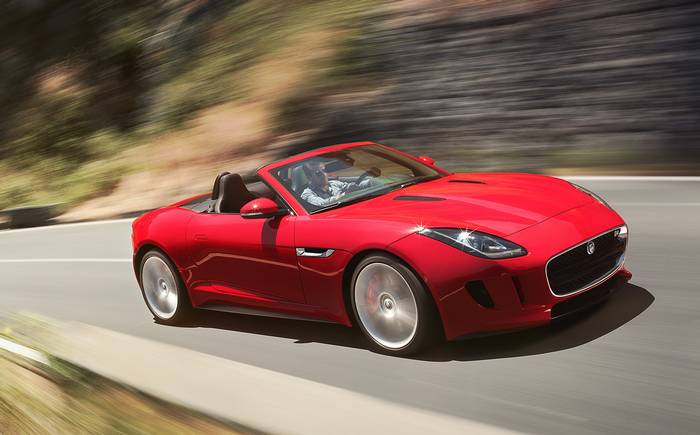 I HAVE always imagined that if I were overtaken, I’d want to commit suicide as soon as possible. It’d be so shaming — all that awful, gut- wrenching guilt because through your timidity you’d inconvenienced a fellow human being and forced him onto the wrong side of the road.

I bet there’d be a hint of regret as well — a sadness that my life hadn’t worked out quite as well as I’d hoped, and that the chap who’d just blasted by had more important things to do than sit behind my sorry arse all day long. That he was more important and more clever. And possibly fitted with a bigger gentleman sausage.

Well, last week I found out exactly what it is like to be passed by faster- moving traffic. I was driving the new Jaguar F-type; the one with the big engine. The V8 S. It can accelerate from zero to 62mph in less time than it takes someone with a mild stutter to say “62mph” and it has a top speed of close to 190mph. It is a very, very, very fast car. But I was in Italy, so absolutely everything else was even faster.

I pulled out of a restaurant one night, roof down, stars twinkling and Lake Como stretching away into the moonlight shadow of that glorious Alpine hinterland. With something zesty on the stereo, I engaged Dynamic mode and roared off into the night.

It was an epic evening to be driving, and an epic road, but after a short while I began to notice that a pair of headlights that had been some distance back were gaining awfully quickly. And, of course, not wanting to inconvenience a local by getting in his way, I increased to flank speed.

Now the Jag was really bellowing. That big 5-litre supercharged V8 was flexing its muscles after each corner and hurling me into the xenon glow that lay ahead. But it was no good. The headlights were right behind me by this stage, so I did what any decent human being would do: I pulled over in the next lay-by to let him past.

And guess what. He was driving a 1.25-litre Ford Fiesta. The old model with the Yamaha engine and the silly oval grille. That was not an inspiring car when it was new, and now, more than 15 years later, I bet it’s even worse. But I can report that with an Italian at the wheel it is still faster than a hot Jag.

And there’s more. It is a fact that on a twisting mountain road a car is always going to be faster than even the fastest superbike. A bike simply doesn’t have enough grip to corner anywhere near as quickly as a car . . . unless there’s an Italian on board, in which case it somehow has all the grip in the world.

I love driving in Italy, I truly do, because there the car has nothing to do with environmentalism or politics. And to describe it as a means of transport is the same as describing a fresh sardine that’s been grilled in a bit of butter and flour as a means of staying alive. To an Italian the car is an expression of your soul, your zest for life. Speed is not dangerous. It’s necessary.

You may know the coastal motorway that heads from France towards Genoa. For an hour or so you are either in a tunnel or on a viaduct or going round a hairpin bend with a 1,000ft drop on either side. If this were anywhere else in the world there would be a 30mph speed limit, enforced by helicopter gunships. But it’s Italy so it has the same 130kph (81mph) limit as all the other motorways.

And that, I presume, is a 130kph minimum, because everyone — mums, nuns and the conker-brown, walnut-faced peasantry in their ancient Fiats — was doing more like 150kph. Round blind bends where you could not possibly see if the road ahead was blocked. It was madness, and I loved it.

Twice, over the years, I have been pulled over by the Italian police while driving a Lamborghini. And on both occasions I was told very sternly that I wasn’t driving fast enough. You have to love that. And on my most recent trip I was getting much the same sort of treatment from everyone. I really did get the distinct impression that many people were extremely annoyed with the lumpen, badly dressed Englishman in his enormous, slow-moving Jaguar.

I, meanwhile, was having a ball, because the F-type is one of those cars and Italy is one of those places where you stomp about all morning thinking up excuses to go for a drive.

It’s actually quite a childish car. It makes a range of extremely childish noises, especially if you engage the Sports Exhaust setting, which makes the back end snort like a hippo when you change up, and bang and crackle when you lift off. I did this a lot in the tunnels.

The styling is quite childish as well. It’s pretty in the same way as a child’s fridge-door drawing of a princess is pretty. It’s simple and clean, and I stand by my earlier claim that it is one of the best-looking cars yet made. Precisely because it isn’t trying to be all grown-up and German.

But there are a lot of things that are not childish at all. The gearbox stands out. There are flappy paddles behind the wheel, but it isn’t a boy-racer double-clutch affair that works well on a racetrack but falls to pieces in town. It’s a conventional eight-speed automatic and it’s a delight.

So too is the way the F-type operates. Apart from the touchscreen sat nav, which is a bit of a faff, every single thing works intuitively. Everything is where you expect it to be, and then, when you think you have everything sorted, you discover that you can change the colour of the interior lighting, or alter the characteristics of the steering.

This car, then: it’s like meeting a new, very pretty girlfriend and then discovering over time that she is also extremely bright and can cook and change the hydraulic pump on a 1975 Citroën SM.

It’s not all sweetness and light, though. When I first drove the F-type in England I was scathing about the ride quality, especially at low speeds around town. In Italy nobody drives at low speeds, so this issue never raises its head. What does is the boot. It really is too small. And the price, which is too high. But you can solve that by buying the less powerful and only slightly slower V6 S version. Certainly that’s what I’d do.

Or would I? Some say that because the F-type is a convertible and a Jag, and its engine comes from a time before the invention of peat, it isn’t a “serious” car. That, behind the pretty body, the technology and engineering are simply no match for the modern-day sophistication of a Porsche or a BMW.

I appreciate this argument, I really do. And it may even be correct. But if I were you, I’d ignore it. Because Blackadder wasn’t very serious either. And that didn’t stop it being an absolute riot.

The car a child would make. And me

Search for and buy a Jaguar F-type on driving.co.uk