Share Article
The ecomentalist’s car that you don’t have to wear a beard to drive
Pros
Odd-looking, in a good way
The tax man likes hybrids
Cheaper than a Prius
Cons
Definitely not a sports car
Terrible rear visibility
Rear seats are not for people
Cars > Honda > CR-Z 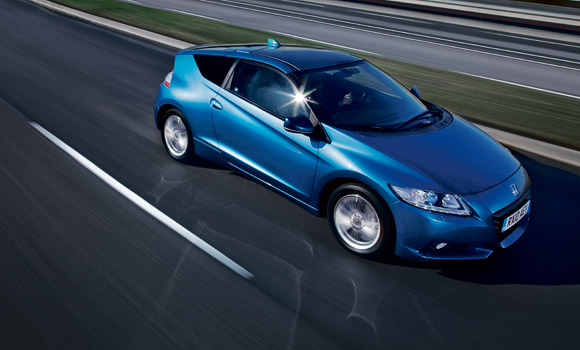 THE TROUBLE with being an environmentalist is that if you really take it seriously, you end up being cold, out of breath, uncomfortable, poor, ill, dirty, malodorous and boring. Worse still, you end up looking like a complete plonker.

We were treated recently to newspaper pictures of Jon Snow, Channel 4’s main news anchor and president of the Cyclists’ Touring Club, riding through red lights, on the pavement and into a box junction, narrowly avoiding an ambulance. Allegedly, he committed 12 offences in one three-mile journey, although Snow has his own explanation. But all that’s not important, really. If he wants to ride through red lights and get killed, that’s his lookout.

What is important is that he was wearing an idiotic hat and foolish luminous ankle straps. In other words, he’d sacrificed his dignity and burnt any semblance of aesthetic awareness on the altar of environmentalism. He was prepared to look like a berk for the sake of your grandchildren’s grandchildren’s great-great-great-grandchildren. I have a similar problem as I try to organise my refuse: plunging my hand into shards of broken glass to retrieve an empty sardine tin that has somehow ended up in the compost bag.

Search for and buy a Honda CR-Z on driving.co.uk

Then having to spend the next two hours standing by the sink wondering when the bleeding will stop. You should see me, too, after a night at my flat in London. I will have a glass of wine, a sandwich and a cup of coffee, but thanks to the excess of packaging used these days, the clearing up necessary after such a feast takes five hours and results in two full bin bags that have to be taken outside with a forklift truck. It makes me hot with impotent, sweary incandescence.

Then we have those people who sit outside public buildings with banners. Have you smelt their armpits? It’s as though they’ve been using them as the final resting place for every dead rodent in Christendom. And their breath and their hair? Utterly, utterly disgusting. So, yes, they are doing their bit but such is the impact on their hygiene that any attempt at a sexual liaison must result in a lot of sick. The government tells you to turn your central heating down a notch. Result? You live in a cold house and your friends will consequently find somewhere else to go. You are told to save water. Result? Your lawn dies. You are told to walk to the shops. Result? You have a heart attack. And then we get to the problem of trying to be green on the road. It’s not difficult to make a small car funky and interesting. Smart did a good job, as did BMW with the Mini. So why do the makers of eco-cars feel the need to make them so catastrophically ugly?

I’m trying to think of a single example of someone deliberately bringing something ugly into their lives. And apart from a wife choosing a nanny for the kids, I can’t think of one. So why would you buy a Reva G-Wiz? There’s only one reason. To show the world that you care. And that makes you sanctimonious, and that means no one will want to come round to your freezing house in the first place. Then we have the Toyota Prius. Its hybrid drive technology was new and interesting enough on its own to attract people who want to make a difference and yet Toyota felt compelled to shroud the mechanical bits in a body designed to stand out, to be odd, to be ugly. Why? Because Toyota is clever. Toyota knows that no one wants to be a quiet ecomentalist. Greens want everyone to realise that they are making a sacrifice for the greater good. So Toyota didn’t fit the technology to a normal car, because then other road users would have been unaware of the owner’s sanctimoniousness.

The Prius is the equivalent of an MBE on someone’s letterhead. It tells the world that you have done your bit, that you are better than everyone else. If you are a nice person, you do your good deeds quietly, with no one noticing. If you are deeply unpleasant, you want the luminous ankle straps. You want the dirty hair. You want to arrive at work in Lycra shorts. You want to be seen on a Saturday at the recycling centre. And you want a Prius.

This brings me on to Honda’s new hybrid — the CR-Z. It looks odd. But odd in a pretty way. It’s not a dirty CND T-shirt with windscreen wipers. It’s more like the old CRX, a car I liked very much. I liked it so much, in fact, that having seen one small picture of it on a stand at the Tokyo motor show, I decided to buy one. In short, the CR-Z looks like a sports car. Drive one of these and people will think you are a boy racer, a motoring enthusiast. You are hiding your green credentials under a bushel, which, if you are a decent sort, is where they belong. There are some drawbacks to the shape, though. Such as you can’t see out of the back and, at oblique junctions, you just have to cross your fingers and hope. I don’t mind that, though. You want a designer watch? You have to accept that you won’t be able to tell the time with it.

There are other issues, too. It may look like a sports car but it isn’t one. Not by a long way. The trouble is that hybrids, when all is said and done, have two powerplants. And one of those needs to be driven by batteries. And batteries are heavy. And heaviness is not what you need for spirited driving. Honda’s tried hard to overcome this. You get a choice of settings — “sport”, “norm” and “econ” — and if you select sport, there’s a surge, a hunkering down as the steering becomes more firm and more of the electric motor’s 13.8 horsepowers are directed towards propulsion. It’s not a bad car to hustle but it’s not fast. It can just about beat the 10-second barrier to 60mph and it will do 124mph flat out but you have to work hard to achieve these figures. And if you work hard, you are undoing the whole point of the thing in the first place. And yet I liked it.

Obviously, the notion of using two engines to save the world is a bit stupid but by having two engines, politicians make you pay less tax and possibly no congestion charge at all in London. That’s madness but who cares when you are the beneficiary.

There’s more. Prices start at £16,999, which means it’s much cheaper than a Prius. It’s obviously not as practical — like the original CRX, it’s a two-seater with a vinyl seat in the back for … I have no idea what it’s for, actually. Not people, though, that’s for sure. That said, the boot’s big. Most of all, though, I like it because every time I climbed into it, it made me happy. I like the look of the thing. I like the interior. And I really like the way the dash glows green when you are being ecomental, and blue when you’re just being mental. Keeping it blue as much of the time as possible is fun. Buying a CR-Z, then, means you can be environmental without telling everyone what you’re up to. It’s a bit like being knighted and not telling anyone. And that makes it really rather cool.

Search for and buy a Honda CR-Z on driving.co.uk