Share Article
Looks great on your driveway. Keep it there
Pros
Huge grunt from the 6.2-litre V8 engine
Louder than a space rocket
Porsche 911 Turbo performance
Cons
Hyper-twitchy steering
Understeers... then flips you round with even a dab of throttle
Dim auto 'box and no flappy paddles
Cars > Chevrolet > Corvette 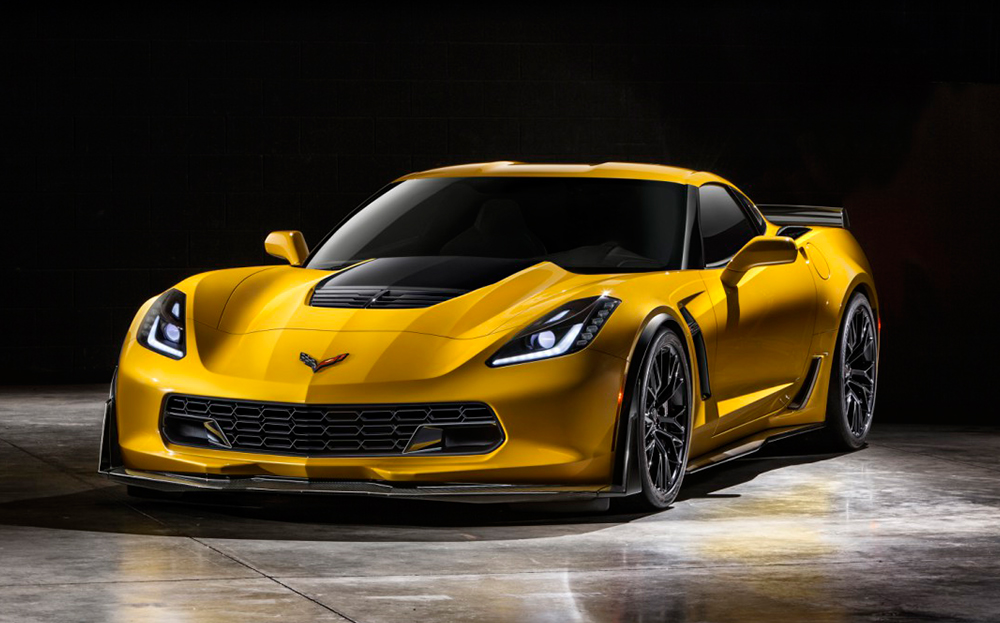 IN THE past few weeks, as you might imagine, I’ve spent quite a lot of time on the telephone to various people in California, and I must admit it’s been rather enjoyable. Talking to an American about stuff is like talking to a child who’s going to the zoo. There’s no irony, no self-deprecation and none of the barely fathomable subtlety you get when talking to a Britisher. It’s a non-stop rollercoaster of primary-coloured enthusiasm.

Browse the used Chevrolets for sale on driving.co.uk

We see exactly the same sort of thing in the online blurb Chevrolet has created for its new Corvette Z06. It’s billed as a “world-class supercar” and a “triumph of design and engineering”. There’s even a quote from Tadge Juechter, the chief engineer who worked on the car: “Its aerodynamic downforce performance is massive and unlike anything we’ve ever tested in any street car.”

Here in Europe we scoff at this sort of thing. We read it and think, “Yeah, well, you would say that. You designed it, so you’re hardly likely to say it’s a bit crap.” Whereas an American would read the quote and think, “Wow. The new Z06’s aerodynamic downforce performance is massive and unlike anything Chevrolet has ever tested in any street car.”

Chevrolet tells us the Z06 sits “at the intersection of Le Mans and the autobahn”, which to me means it sits in the French village of Bar-sur-Seine

There’s more. Chevrolet tells us the Z06 sits “at the intersection of Le Mans and the autobahn”, which to me means it sits in the French village of Bar-sur-Seine, just to the southeast of Troyes. But it wasn’t sitting there at all. It was sitting in the pits at the Thruxton racing circuit, in Hampshire, on a very windy and extremely cold May day last week.

There is nothing on God’s green earth that is quite as depressing as a second-division British racing circuit: the metal window frames on the mildewy portable buildings, the boarded-up burger vans, the cock-eyed signs saying, “Marshal camping”. And there in the middle of it all was what appeared to be a child’s toy, an egg-yellow Corvette. It cheered the place up in the way a pair of bright curtains can make a squat feel like home. 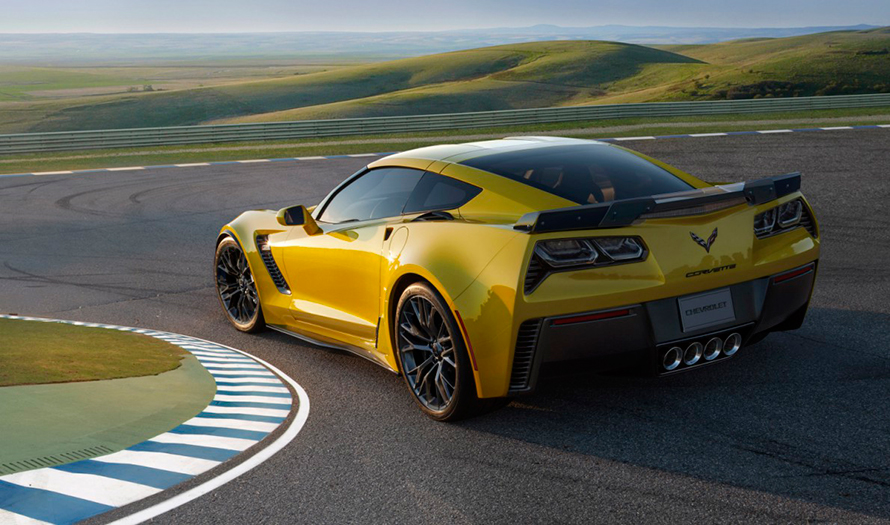 Before we begin, I should explain that I like the 2015 Corvette a very lot. Only recently I told you that the Stingray convertible version was good-looking, fast, adroit in the corners and excellent value for money. If it weren’t for the scrap-metal-dealer image and the fact the steering wheel is on the left whether you like it or not, the new Corvette is a car I would very much like to own.

Or would I? Because what you see in the pictures is the latest incarnation of the new ’Vette, the Z06, a car that sits at the intersection of Le Mans and the autobahn and has better downforce performance than any other street car ever made by anyone ever.

It certainly has plenty of grunt because the company has added a supercharger to the 6.2-litre V8 engine. And in round numbers this means 650bhp and 650 torques. Which in turn means that in a drag race — and I know this because I tested it — it has the same performance as a Porsche 911 Turbo.

In the olden days this would have been enough. Hank and Bud and Tadge would have looked at the straight-line speed and, after a bout of high-fiving, put the car on sale. But that is not the way in Kentucky these days. So the Corvette has a carbon-fibre bonnet for a lower centre of gravity, along with titanium intake valves and composite floor panels, plus the option of carbon ceramic brakes.

The noise from its four centrally mounted tailpipes is painful… It’s a sound that has a mass. It has gravity. I shouldn’t be at all surprised to hear that it can kill

And you get a dial on the centre console that can turn your relatively benign road car into a screaming track monster. Although when I say screaming, I mean bellowing. And even that doesn’t quite cover it. When the Z06 leaves the line in a full-bore racing start, the noise from its four centrally mounted tailpipes is painful. Ever heard a Harrier hover? Well, it’s like that.

Except it’s louder. Once, I was taken to watch Nasa test a 37m-plus-horsepower space shuttle rocket engine in a place called Stennis, in Mississippi. I told the man I didn’t need ear defenders because I’d seen the Who, but it turned out I did. It was a genuinely awesome and awful experience, that sound. And even that wasn’t as loud as the ’Vette. It’s a sound that has a mass. It has gravity. I shouldn’t be at all surprised to hear that it can kill.

Of course, inside the car, you are several yards in front of the noise and, anyway, you’ve got more important things on your mind, such as: “I’m going to crash soon.” It’s hard in the cockpit to work out what’s wrong, there’s just so much going on, but having given the matter some thought since I came home and lay in the bath shaking, I think I have the problem. Chevrolet has fitted titanium this and ceramic that because these words look good in a brochure. And they give an owner good boasting rights at the golf club and the shooting range. But don’t be fooled into thinking they make the car easier to drive and easier to manage. Because they don’t. 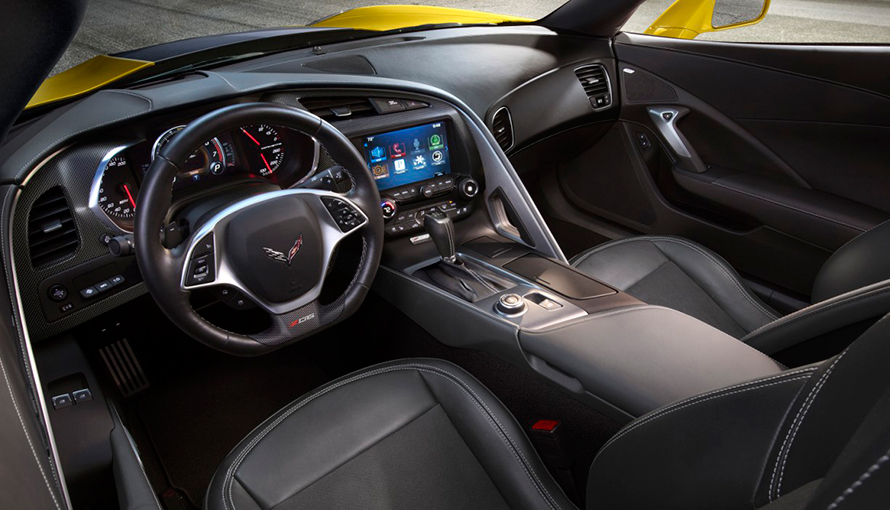 This car is evil. You turn into a corner and there’s some quite pronounced understeer. You give it a dab of power to solve the problem but because there’s so much torque, the back end doesn’t start to come loose. It lets go completely.

So now you’re sideways and in real trouble. Because Hank and Bud and Tadge have heard that a racing car needs quick steering, they’ve gone mad and given the Z06 a rack that would be deemed twitchy on a PlayStation. And semi-slick tyres. And nowhere near enough lock. So now you’ve spun.

On the next lap you know not to exceed the levels of grip, but because the steering is so twitchy and because the power is so grunty, it’s hard to stay below the point of no return. The only solution is to drive very slowly indeed.

This car was built to look good in a brochure. The numbers and ingredients are tantalising, but this car is not a serious player in the European theatre of war

Let me put it this way. If this car is supposed to sit at the intersection of Le Mans and the autobahn and if all that titanium and carbon fibre stuff is there for a reason other than marketing, why is it available only with a manual gearbox or the dimwitted automatic that was in my test car? Why would it not have blink-of-an-eye flappy paddles?

That’s the giveaway, really. This car was built to look good in a brochure. The numbers and ingredients are tantalising, but this car is not a serious player in the European theatre of war. It may be able to out-accelerate just about everything, and on a skid pan the size of Texas, where there’s nothing to hit if you overstep the mark, it can generate some extraordinary lateral G. But it’s not nice to drive.

So if you want a serious car, buy one from the continent that gave the world Shakespeare, Monet and Emerson Lake & Palmer. Europe does serious well. It does substance. It does brilliant. America does Disney. And what we have with the Z06 is Disney trying to do a hard-hitting documentary about Africa’s civil wars.

Search the used Chevrolets for sale on driving.co.uk