By James Mills
Share Article
Verdict Delivers the luxury, technology and running costs owners will like, but can’t get around the problem of range-anxiety
Pros
Impressive performance
Low running costs - including no benefit-in-kind tax
Silent running and seating for seven
Cons
Range is not best suited to long distance, pan-European drives
Fit and finish of cabin could be improved
Touchscreen operation could be distracting
Cars > Tesla > Model S 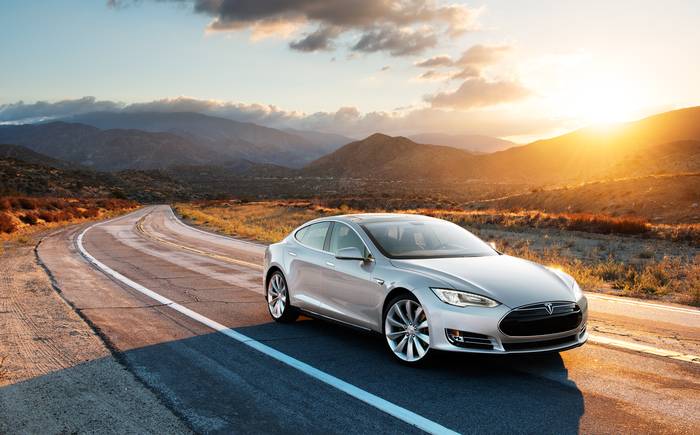 What is the Tesla Model S?

The Tesla Model S is an electrically-powered alternative to fossil-fueled status symbol saloons that promises up to 300 miles of driving on one battery charge. The Model S has proved such as hit with clean-living types in Norway, one of American start-up Tesla’s initial European markets for the car, that it became the top-selling car in September, overtaking the Volkswagen Golf in the process. Tesla is now targetting the UK with right-hand drive versions.

Like the Californian crowd that has snapped up the Model S – more than 14,000 have been sold in the US – you might consider it over a Jaguar XJ or a well-specced BMW 5-series, as it costs upwards of £54,500, which is for the 70D version. As well as marking you out as an ‘early adopter’ and having the potential to be cheap to run, it offers seating for five or even seven, if an extra pair of rear-facing jump seats are chosen from the options list (a £2500 option).

The car is based around a light aluminium and steel monocoque and its (not light) battery pack is positioned under the floor of the cabin. It’s strong, too. During independent crash tests in America, the National Highway Traffic Safety Administration rated it the safest production car yet tested, and it achieved a five-star Euro NCAP rating.

Buyers of a Model S must decide which battery pack they want with the car – 70 or 85 kWh versions or a high-performance 85kWh that is claimed to accelerate from standstill to 60mph in 4.2seconds.

As the 0-60mph time of 4.4sec suggests, the Model S can go like a bat out of hell when you want it to. We tested the more powerful 85 kWh version and regardless of whether it was from a standstill or overtaking slower cars on the motorway, it had the capacity to turn your stomach giddy like a fairground ride.

Needless to say, enjoying the sensation of having full thrust available at an instant and from zero revs is not the best way to preserve battery power. Or your driving licence. Take it easy and it will sooth you, and passengers, with a silent, slow cruise.

And silent it is. For now, this is a novelty that some drivers will find pleasingly refreshing; petrolheads, on the other hand, would probably rather walk than risk being ridiculed for driving a glorified milkfloat.

To experience the Model S is to know that this is no milkfloat, though. It is fast, reasonably composed and you rarely need to brake, as the effect of reversing the electric motors to regenerate battery power slows the car effectively.

The main sticking point is touring range: what will it really be when living with the car day-in, day-out, come rain or shine, baking heat or freezing weather? We can’t answer that question… yet. You’ll also need to install a recharging point at home and long distance drivers will have to decide whether they can live with the phenomenon of range-anxiety, given the UK’s limited number of public recharging stations.

This is the area where Tesla still has some ground to make up on established luxury car makers. Once you manage to drag your eyes away from the huge 17in touchscreen in the centre console – more on that later – and closely inspect the standard of fit and finish and panel gaps, it is noticeable that the quality is nothing that will have engineers from Audi, Mercedes or Porsche reaching for their feeler gauge set.

It’s also noticeable that headroom in the cabin is not as generous as some rivals, so taller drivers will want to try one for size. However, the appeal of having an additional pair of rear-facing jump seats in the back gives it a unique advantage over the competition, and – as with a Porsche Panamera – the rear seats fold flat and the hatchback offers a generous aperture to take advantage of up to 1642-litres of luggage space. It’s almost 400-litres more than a Panamera, and illustrates the packaging advantages presented by the fewer moving parts required beneath an electric car.

The design of the cabin’s layout and look and feel of the materials used is attractive, but the star feature is the way information is displayed. And with the Tesla Model S, there is a lot to display. Owners can fine-tune the big touchscreen to have their preferred controls – such as the climate control or audio system (impressive in its own right) – set permanently at the base of the display. Then it’s a case of cycling through a vast range of settings that allow the driver to personalise the features of the Model S to their preference – such as the air suspension, regenerative braking or even the web-based music streaming service, that is available in US models and will be added soon in Europe.

There is a lot to take in. And by pretty much doing away with buttons throughout the cabin, it will take owners time to become familiar to the point where it becomes an intuitive process.