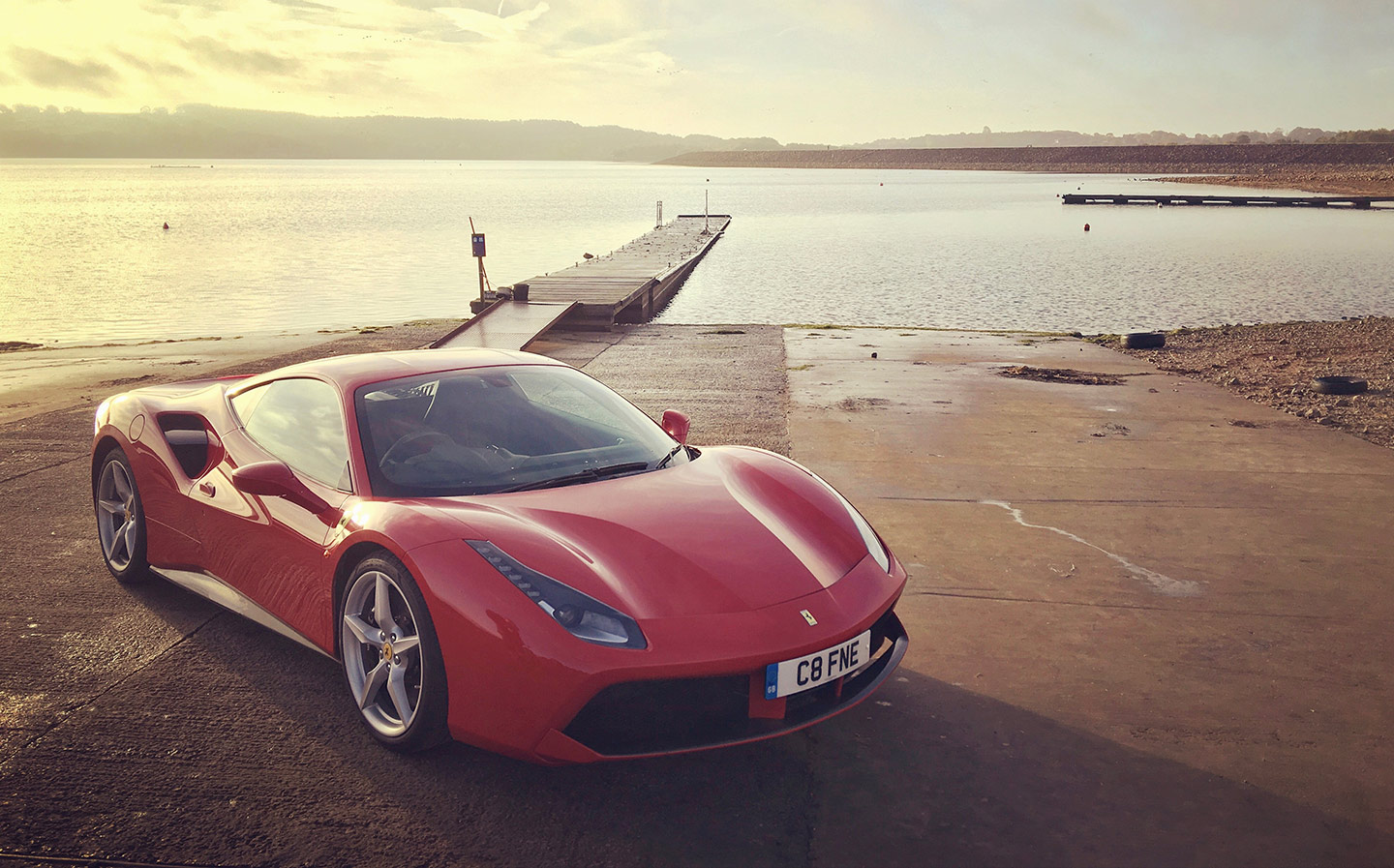 WHEN I joined Autocar magazine as a 21-year-old road tester, I was handed a list of dos and don’ts by the veteran motoring writer Peter Robinson. Chief among them was the dictum: “Every car is rubbish until proven otherwise.”

This sage advice came back to me last week as I climbed behind the wheel of the Ferrari 488 GTB. Over the years, Italian companies have made some lousy cars, but the prancing horse on a steering wheel is still one of the most evocative symbols in motoring. McLaren makes some fantastic machines, but its upside-down swoosh logo just doesn’t come close.

The 488 GTB has the unenviable task of replacing the seminal 458 and has the added complication of turbocharging, a sop to emissions regulations and a first for Ferrari. It marks the start of a new era, but not necessarily one full of goodwill and hope. There was much to reflect on as I journeyed north from my home in the southeast to Donington Park and the final round of the 2016 Caterham Supersport championship. I have used a different supercar to travel to each race in the series, gaining an unparalleled real-world experience of the Audi R8, BMW i8, McLaren 650S and other highly covetable machines.

View the Ferrari 488 GTBs for sale on driving.co.uk

Back to the 488, though. When I first glimpsed it at the 2015 Geneva motor show, I wasn’t convinced. Under the harsh show lights, it looked contrived – as though the aerodynamics engineers had locked up the stylists and run riot. In the wild, though, the 488 looks magnificent. Yes, it’s a collage of all the scoops, intakes and spoilers needed to provide stability at the 205mph top speed, but there’s real beauty too. The styling around the lights, for example, is exquisite. There’s a sense of theatre, of a car built, as the Italians say, con amore.

Inside, we find some Italianate eccentricities. A lot of the controls are on the steering wheel, which is supposed to evoke an F1 car, but on the M1 it’s just a bit baffling. 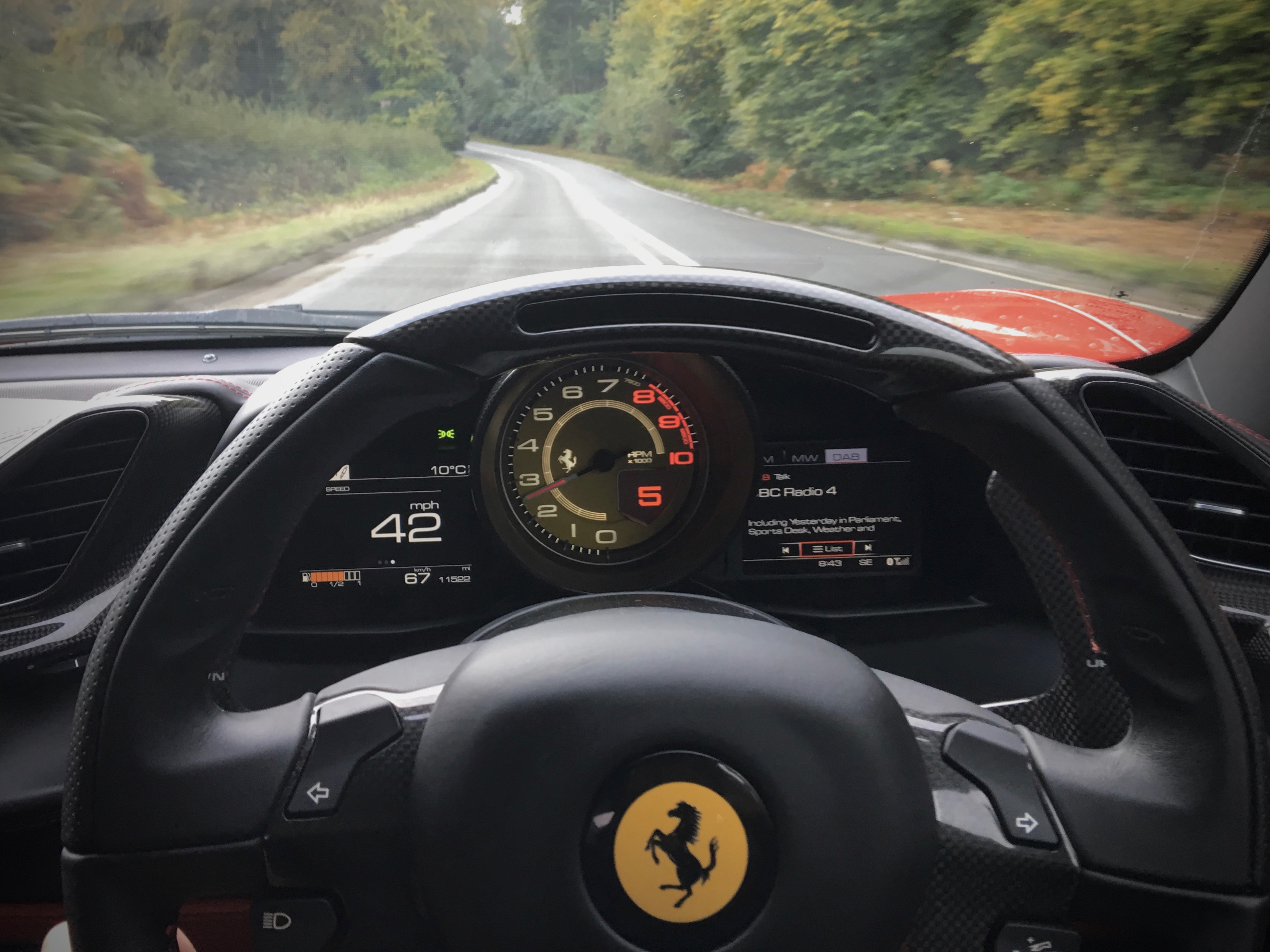 There was also an irritating electronic gremlin in the car that muted the radio every time I indicated left. Ferrari’s build quality has improved hugely since the 1990s, but it’s still not up to Porsche standards. The 488 is not as practical as a 911 either, but the luggage bay in the nose is usefully large and supplemented by a shelf behind the seats.

In the course of my career I’ve driven every V8 Ferrari since the 360 Modena and a few of the earlier cars too. The 360 wasn’t Maranello’s finest, but the 430 was better; then the 458 made a giant leap forwards. The 488 isn’t such a mighty jump from that, but it is a decent step.

The McLaren 650S I drove to the Anglesey round of the Caterham Supersport championship only really felt special at high speed. The 488, by contrast, conjures a sense of occasion at any speed and on any road. The steering is so sharp and responsive that it demands intense concentration, but that’s no bad thing – a supercar is supposed to be for driving.

The double-clutch transmission is faster and smoother than ever, and improvements to the electronic damping serve to combine a comfortable ride with superb body control. On the undulating country roads around the Donington Park circuit, being able to soften the damping makes a huge difference. The only thing that really holds the 488 back is its width. In the interests of stability, supercars are getting ever wider, but no one has bothered to widen the roads.

The journey from Premier Inn to circuit (not a traditional Ferrari experience) offered an opportunity to explore the engine’s repertoire. The outrageous scream of the 458’s naturally aspirated engine is missed, but Ferrari has still managed to produce the best-sounding turbo engine you’ll hear, even if it’s deeper than before and more muffled. And there’s no denying that the additional mid-range shove from the turbo improves the performance.

The 488 is comically rapid. For the record, the mid-mounted 3.9-litre V8 produces 661bhp and 561 lb ft of torque. To put that into context, the V8 in Ferrari’s celebrated F40 kicked out 478bhp. Ferrari says the 488 will do 0-60mph in three seconds flat, and there’s no reason to doubt it. This car is a lunatic in Dior sunglasses.

Over the course of the Caterham Supersport season, I’ve decorated the paddock with a range of exotica, and the reactions of my rivals, many of whom own supercars, have been telling. The McLaren 650S drew admiring glances, as, to a surprising extent, did the Audi R8.

None attracted attention like the 488, though. There’s still something about a new Ferrari that gets even cynical grown-ups excited. In truth, Ferrari doesn’t need to build cars as good as the 488 to make a profit, and the fact that it does is a tribute to the people at Maranello. This is a superb car. 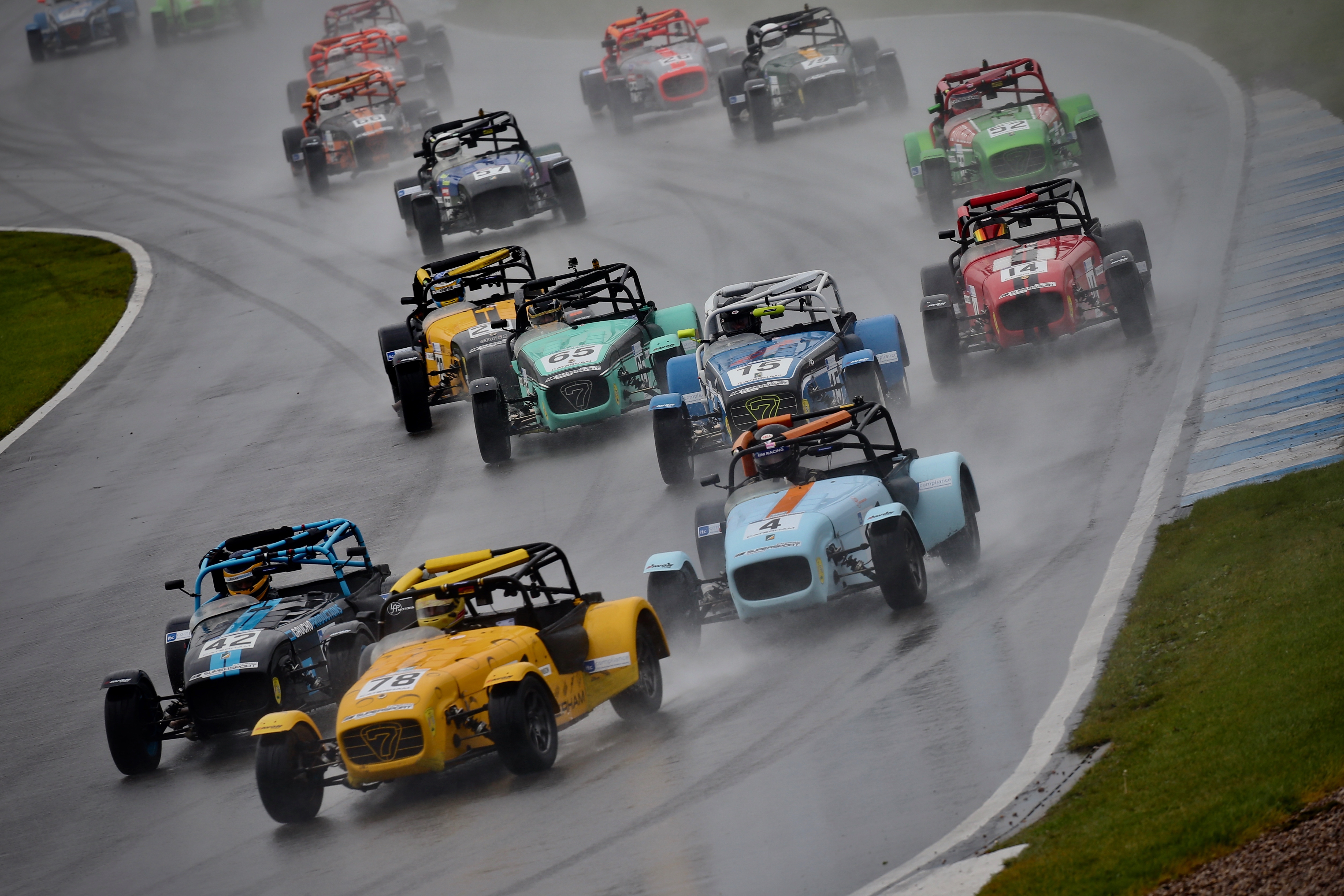 Beyond the simple joy of driving a car as fast as possible, I race because it gives me an adrenaline hit I can’t replicate elsewhere. As the race day dawns, I feel a nervous energy that builds to a head with the green flag lap that precedes the start. Odd though it may sounds, racing for me is stress relief par excellence.

If it rains, as it did at Donington, these sensations are heightened. In the wet the danger increases markedly. Grip on the circuit is drastically reduced, the painted kerbs might as well be made of ice and if there’s a grass run-off area, you won’t slow until you hit something. Then there’s the spray. Only the leader can see where they’re going, and everyone else drives on muscle memory.

It’s a different kind of experience and one I’ve always enjoyed, but as you’ll see on this video, it’s not easy…

Look out for my review of the year, ranking each of the supercars I’ve driven.