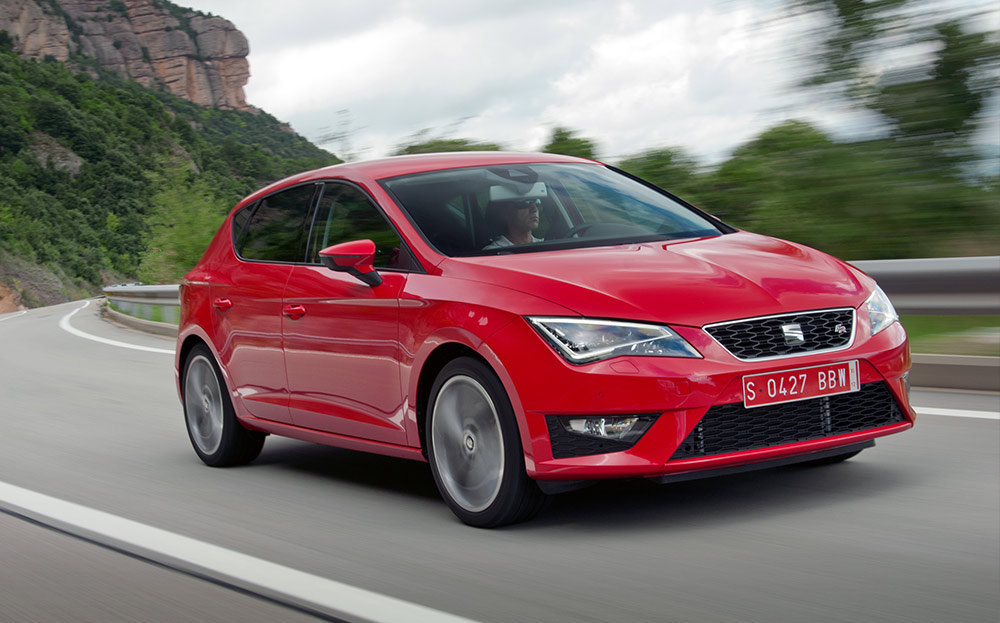 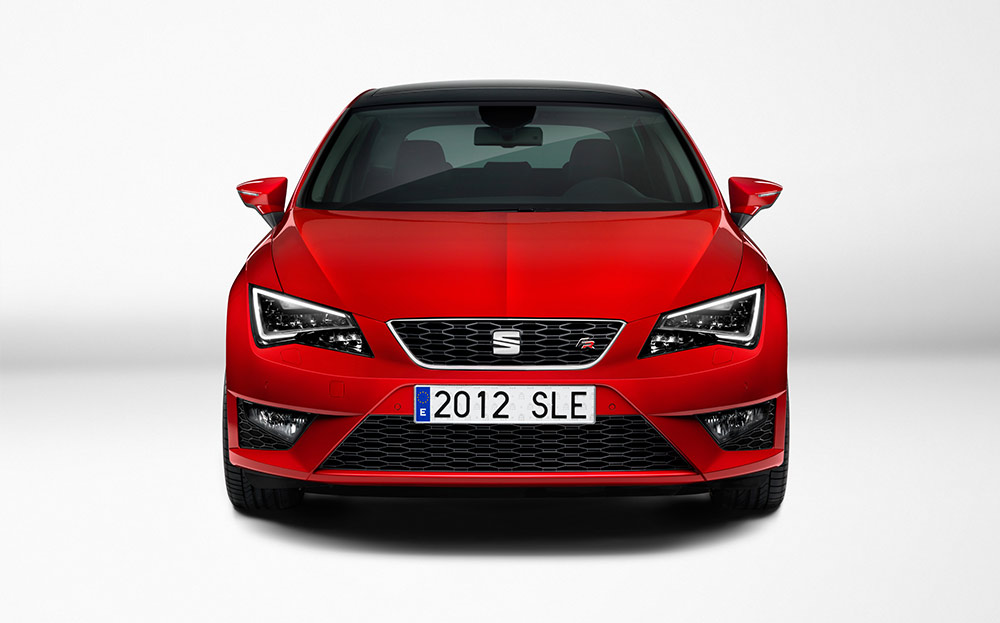 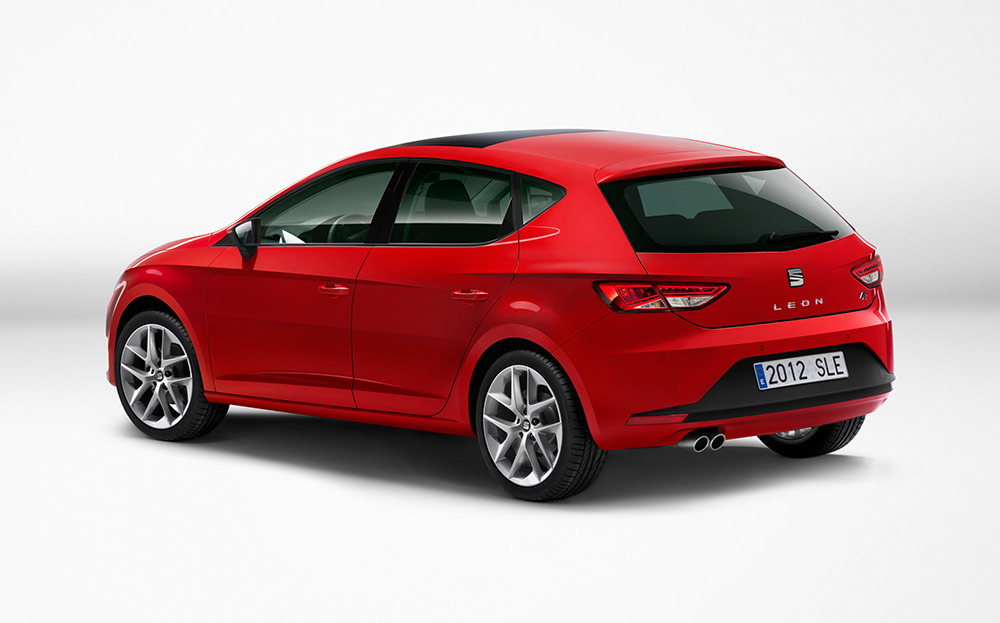 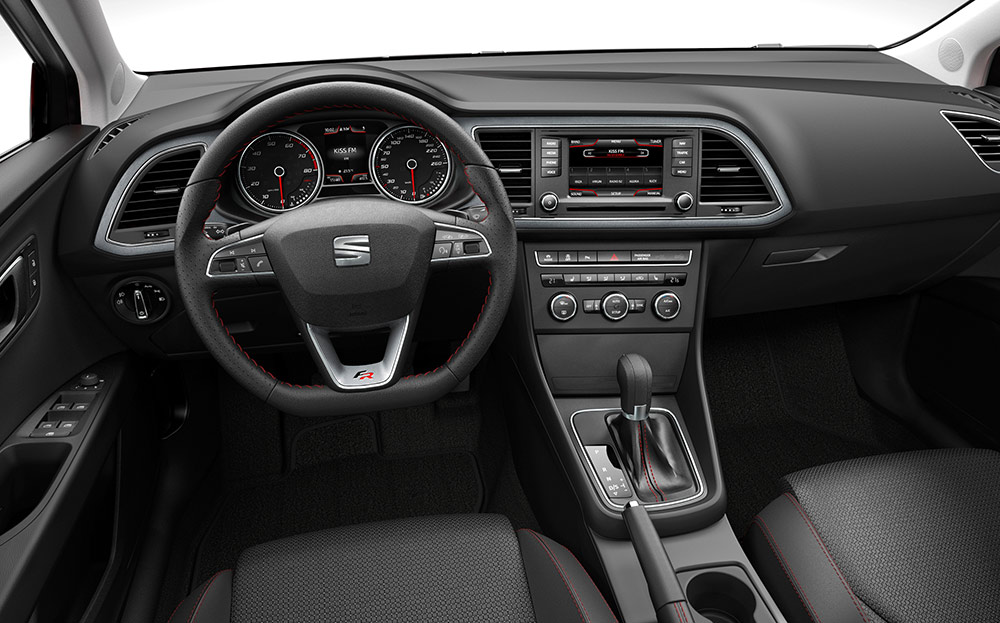 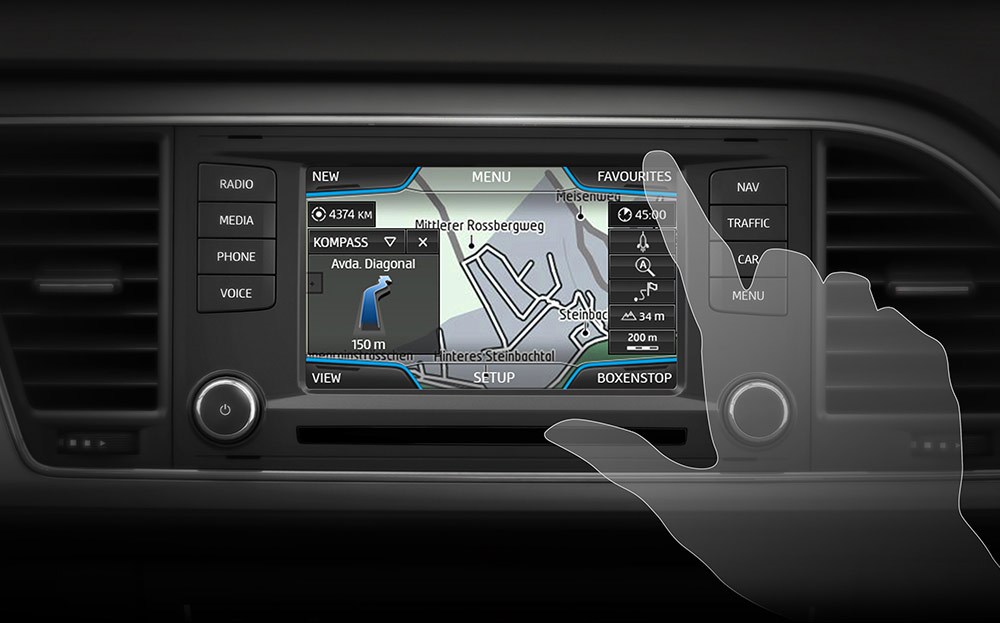 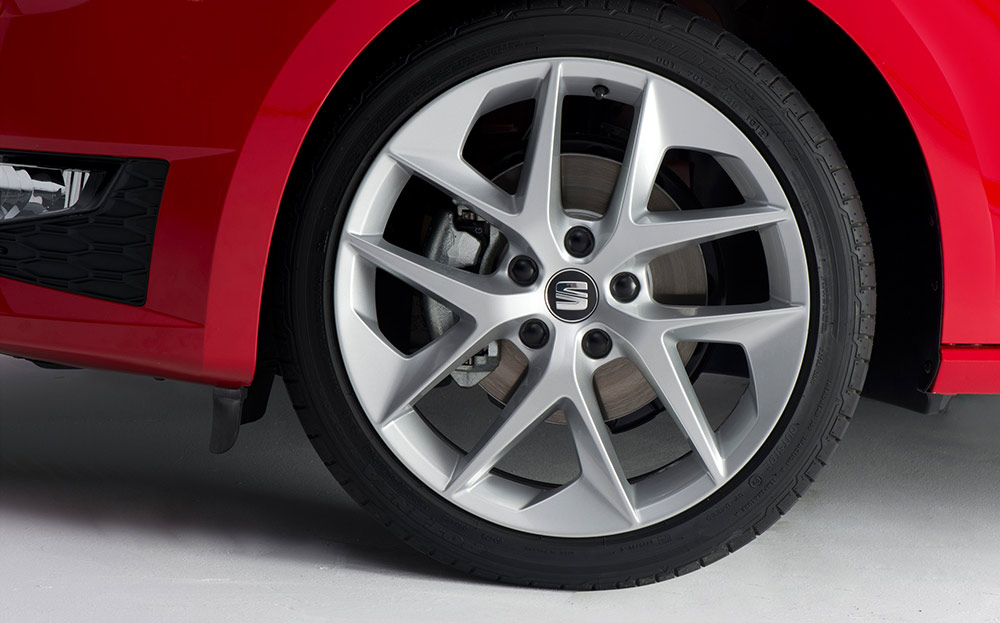 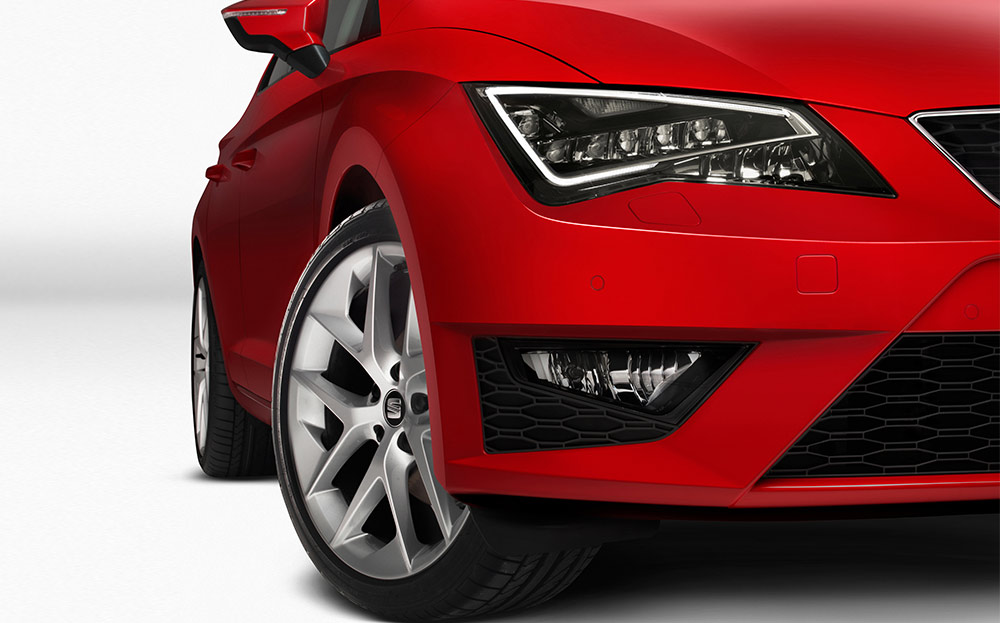 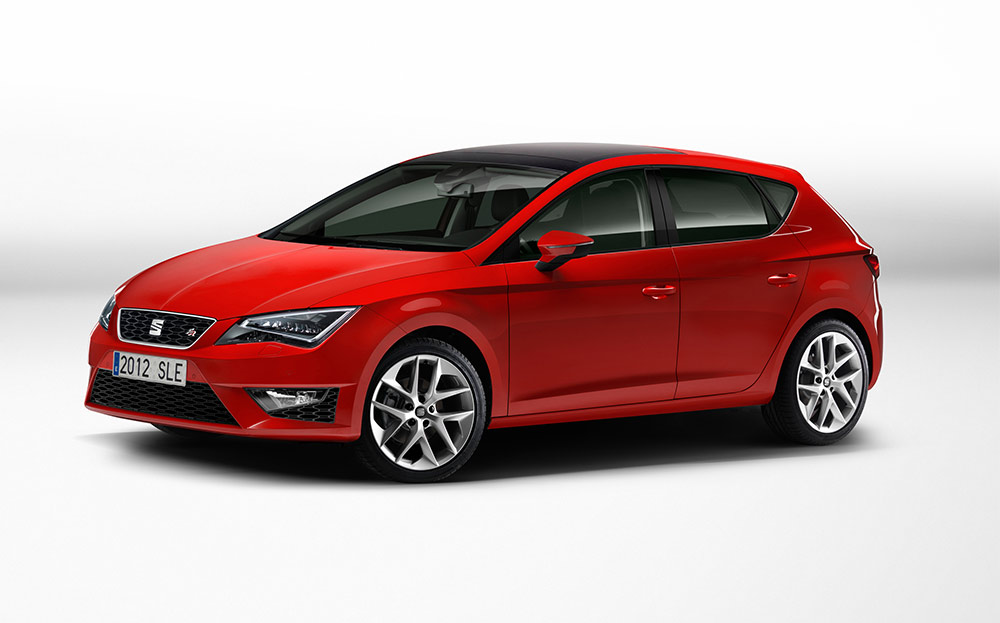 IT’S OFTEN said that beauty is in the eye of the beholder, but there are certain things that we can all agree on. Cara Delevingne is a bit of a looker and so too is George Clooney, while in the car world the Ferrari 275 GTB and Jaguar E-type are universally adored, from an aesthetic point of view.

The third generation Seat Leon, which is effectively a VW Golf in a party frock, perhaps can’t be mentioned in the same breath as the greats listed above but there’s no denying that it looks fabulous. Considering it arrived in 2012, that’s even more impressive to say in 2016.

The Leon isn’t just a pretty face, though, because being based on the Volkswagen Group’s MQB platform it’s also good to drive. With well-weighted steering, a slick gearchange and light controls it’s a car that in its most basic guises is more easy to drive rather than especially rewarding or engaging.

The more zesty Leons make better use of that chassis. While cars with S and SE trim feature standard suspension, the FR gets a stiffer set-up that allows you to have a bit more fun, even if the steering still doesn’t have the level of feel that you’d expect in what is at least a warm hatch, if not quite a hot one.

Working out which Leon to buy is bewildering, as there’s a choice of trims and bodystyles (the latter encompassing three- or five-door hatchbacks plus a five-door estate), an array of petrol and diesel engines plus (unusually) manual or automatic transmissions with every single powerplant.

As one of the sharpest-looking cars on the road (literally — Seat is very proud of its creases, which are hard to machine, so they say), the three-door hatch, dubbed Leon SC (sport coupé) is the one to go for if style matters more than practicality. But if you need to use the back seats regularly the five-door hatch should fit the bill – or the Leon ST (sport tourer) estate if you need ultimate carrying capacity. 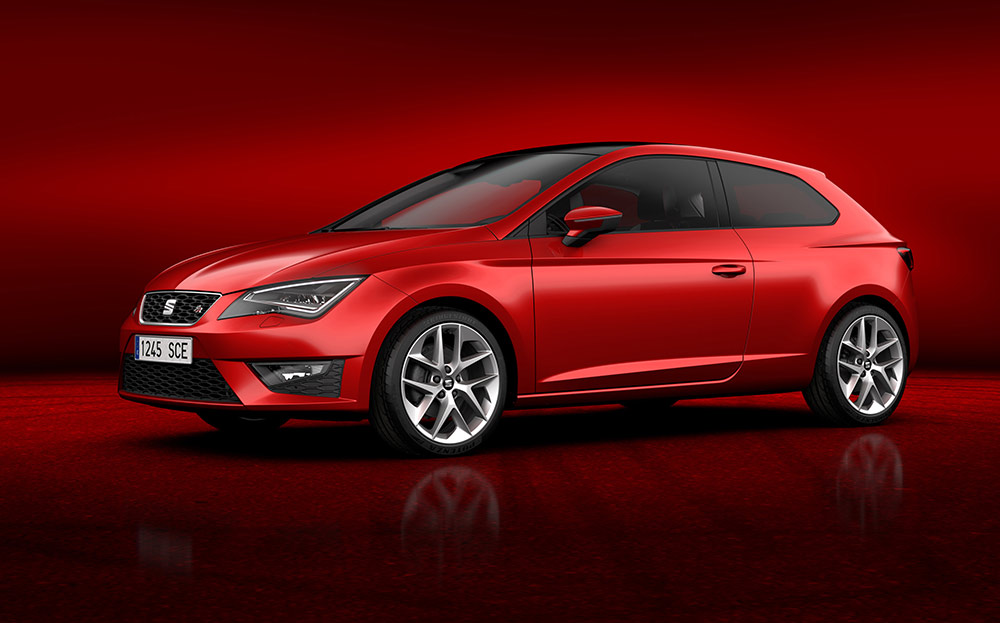 None of the engines should be avoided, particularly, but the entry-level 1.2 TSI isn’t cut out for A and B-roads as it’s just not pokey enough. It’s fine if you’re in no hurry but if you must stick with petrol power it’s worth coughing up a few extra quid and opting for the 1.4 TSI instead, which is nicer to use and likely to be more frugal in the real world as it doesn’t have to be worked so hard.

Pick of the petrols is the 178bhp 1.8 TSI in the Leon FR. It’s a peach of an engine: free-revving, muscular, smooth and efficient.

It’s the diesel engines that tend to be the most popular though. The 1.6 TDi is a decent unit but if you want serious muscle with excellent economy it’s the 2.0 TDi that you want. There are 148bhp and 181bhp options; the latter also packs 280 lb ft of torque — the same as a Porsche Boxster, only the Leon comes with rear seats and a claimed 60mpg fuel economy figure.

The cheapest 1.6 TDi in non-Ecomotive form gets a five-speed manual gearbox as standard; all other Leons get an extra cog. With a light clutch and a slick gearchange, a manual-gearbox Leon is good fun to punt along. However, the seven-speed DSG automatic transmission is also quite brilliant and while you pay a premium of over £1,000 for the two-pedal option, we’d say it’s worthwhile as it gives you the best of all worlds.

There are five trim levels to choose from, with the spartan entry-level S best avoided. It gets air-con and powered front windows but sits on steel wheels and gets little in the way of creature comforts. So start looking at SE, with its alloy wheels, cruise control, ambient cabin lighting and electric rear windows. SE Dynamic Technology adds 17-inch alloys, privacy glass and an upgraded multi-media system along with LED headlights. 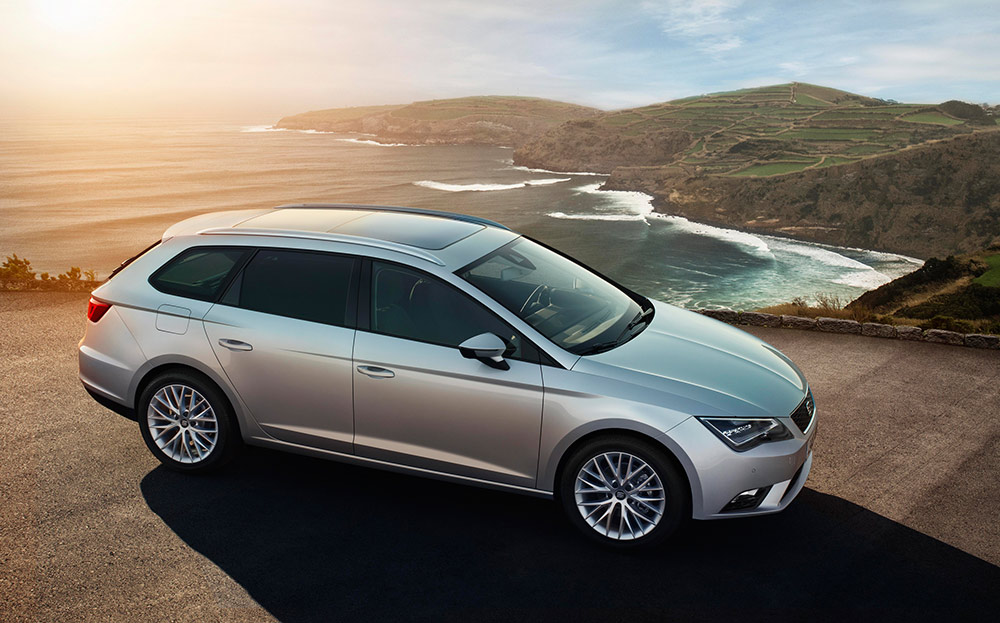 Stick with our recommendation of FR trim and you’ll also get dual-zone climate control, rear parking sensors, electrically folding door mirrors and an upgraded hi-fi. If you’ve got lots of cash burning a hole in your pocket you could opt for the range-topping FR Titanium, which brings 18-inch alloys, an upgraded touch-screen display, DAB radio and LED headlights.

Whichever spec you go for you’ll get one of the most well-rounded family cars on the road. Cabin space is good but the Leon is best viewed as a four-seater unless you’re transporting kids in the back, however the Leon should be noted for one of the biggest boots in its class.

The seats are supportive (especially the sculpted items in the FR) while the fit and finish is generally up to Volkswagen standards, although there are a few low-rent materials in evidence here and there; a cynic might suggest that VW Group does this deliberately in order to make sure the Golf is a slightly more desirable choice.

Viewing the Leon as a cut-price Golf misses the point, though. The Seat is cheaper and better value, just as good to drive, every bit as practical and comes with the same strong, efficient engines. The Leon’s cabin might not be as posh as the Golf’s but it’s hardly downmarket.

Look outside the VW Group and the Leon has no trouble competing with rivals such as the Ford Focus, Vauxhall Astra, Peugeot 308 and Honda Civic, none of which will ever be mentioned in the same breath as Delevingne or Clooney. Which is surely reason enough to take a closer look at the Seat Leon Mk3.