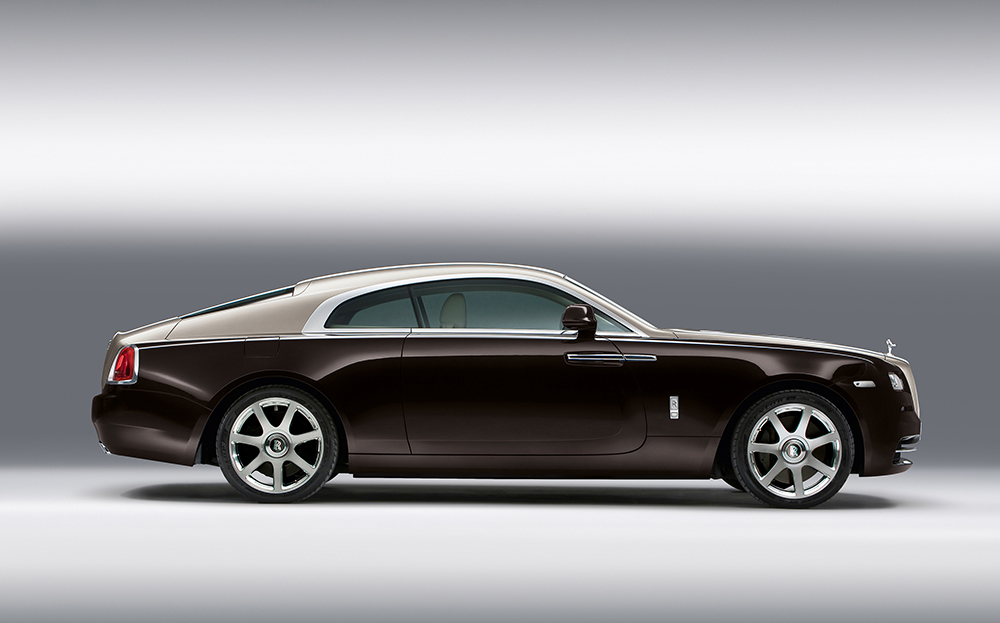 What is the Rolls-Royce Wraith?

Billed as Rolls-Royce’s most powerful model, the Wraith is a two-door, four-seat coupé (or what the car maker prefers to call a “super GT”) aimed at the sportier driver with a spare £220,000 to spend. It wants for little, either in performance or luxury, and nor should it given the quality of its competitors which include the forthcoming Mercedes S 65 AMG coupé, the Bentley Continental GT Speed coupé and the Ferrari FF.

Of course, when considering any Rolls-Royce, the term “competitor” is a moot point. Few people with the appropriate readies will be torn between choosing the Spirit of Ecstasy or the three-pointed star. Bentley is more likely to be on their shopping list but even it lacks the Rolls’s sense of occasion. The Wraith is based on the Ghost platform but as befits its sporting pretensions has a shorter wheelbase, a wider rear track and uprated suspension. It also packs a more powerful version of the Ghost’s V12 engine, tuned to deliver 624bhp (compared with the Ghost’s 563bhp), and 590 lb ft torque at just 1,500rpm for even more effortless progress.

At launch the Wraith heralded a number of technological firsts for Rolls-Royce, since adopted by other models in the range. These include satellite-aided transmission which uses GPS data and the car’s navigation system to predict the road ahead, and change gear to suit. Another is a new voice command system that allows the driver to tell the sat nav system where they’d like to be directed to, and an infotainment controller with a smartphone-style “pinch to zoom” facility.

Rolls-Royce does not describe the Wraith as a sports car or a coupé but in its typically understated way does concede that it is “made for driving”. We’ll assume that’s by its owner, rather than anyone in a peaked cap. The V12 engine is the most memorable component. It delivers maximum punch at just 1,500rpm, which explains why, on a light throttle at 70mph, the “power reserve” indicator (there’s nothing so vulgar as a rev counter) typically shows over 95% in hand. In these conditions it is possible to see 29mpg. Squeeze the throttle and those reserves decline in direct proportion to the mounting growl from the exhausts, the savage push in your back and, most exciting of all, the shift in the horizon as the nose rises and the tail squats. Luxury never accelerated so savagely.

Like a squiffy Wooster who’s had one too many, it is less impressive in the bends. It’s not a traction issue: the car’s sheer weight and enormous tyres see to that. Instead, the Wraith is caught between a rock and a soft place. It develops enormous power but, in the cause of luxury, its steering is too light and imprecise. Pile into a corner and the great nose swings round obligingly but without enthusiasm. Which is not say it can’t be hustled. Drain the power reserve quickly enough, and the grin on your face will be as wide as that famous grille.

The uprated suspension offers a confusing mix of sporty firmness and limo softness. On motorways and smooth roads the Wraith can waft in true Rolls style, its air suspension giving the impression the car is flying rather than rolling on four wheels. Hit a patchwork of potholes and crudely applied tarmac, however, and the ride is instantly unsettled, the body shuddering as the wheels drop and bounce. A test drive in a Ghost a few days later, and over the same roads, showed just how much luxury the Wraith driver must trade for his car’s sportier character. Bizarrely, the Ghosts’ steering felt a degree heavier and more connected, too.

We have to believe the eight-speed, sat nav-controlled gearbox does its job, predicting bends and inclines, and changing gears to suit. But the truth is, the engine is so quiet, and the ’box so smooth, you’d never know. Perhaps that’s the measure of its success; the car never feels wrong-footed by any change in contour or direction.

If you’re planning on driving the car quickly you’ll also need to be aware the the brakes are lacking in initial bite, which can instantly remind you that you’re driving nearly two and a half tonnes of car. Mercifully, there’s always brake assist if you judge it wrong in low-speed situations.

The rear screen is barely larger than a letterbox while the wing mirrors are too large and placed just aft of the windscreen pillar, obscuring the driver’s view in tight, right-hand turns. On the upside, the absence of a central B-pillar allows a perfect view over the shoulder when reversing and while the turning circle is vast, the 360-degree bird’s-eye view display enables you to check all corners and park to perfection.

This is where a Rolls-Royce must impress and the Wraith does not disappoint. It’s strange to see so much of the Ghosts’s fascia and highly chromed trim (one would like to think one’s Wraith deserved a bespoke look), and it’s not as special as the interior of the Phantom, but nevertheless, it feels suitably sumptuous. Part of its charm is its masterful balance of old and new: the thin steering wheel with its large centre boss, the column change, the chromed push-pull vent knobs, and the overall simplicity, symmetry and orderliness of the layout, all enclosed in a sumptuous coupé cabin.

That said, the rotary air vents are difficult to grasp and could turn more smoothly, the glovebox and centre console lids feel flimsy and the clock looks like a cheap bedside alarm.

The seats, though, are magnificent: supremely comfortable and generously upholstered. They’re the perfect place from which to admire the Canadel wood panelling in the doors and, if fitted, the optional LED night-sky headlining. This should be tacky beyond words but actually brings a touch of theatre to the whole experience.

The Wraith is no mere two-plus two. The rear cabin is roomy and easy to access via the suicide doors. Ah, those doors: they look amazing but take a bit of getting used to. At first, you find yourself backing into the Wraith and fishing for something to hold as you drop into the seat. It takes practice. They’re certainly big and heavy, and open wide so the optional power-close is well worth the money.