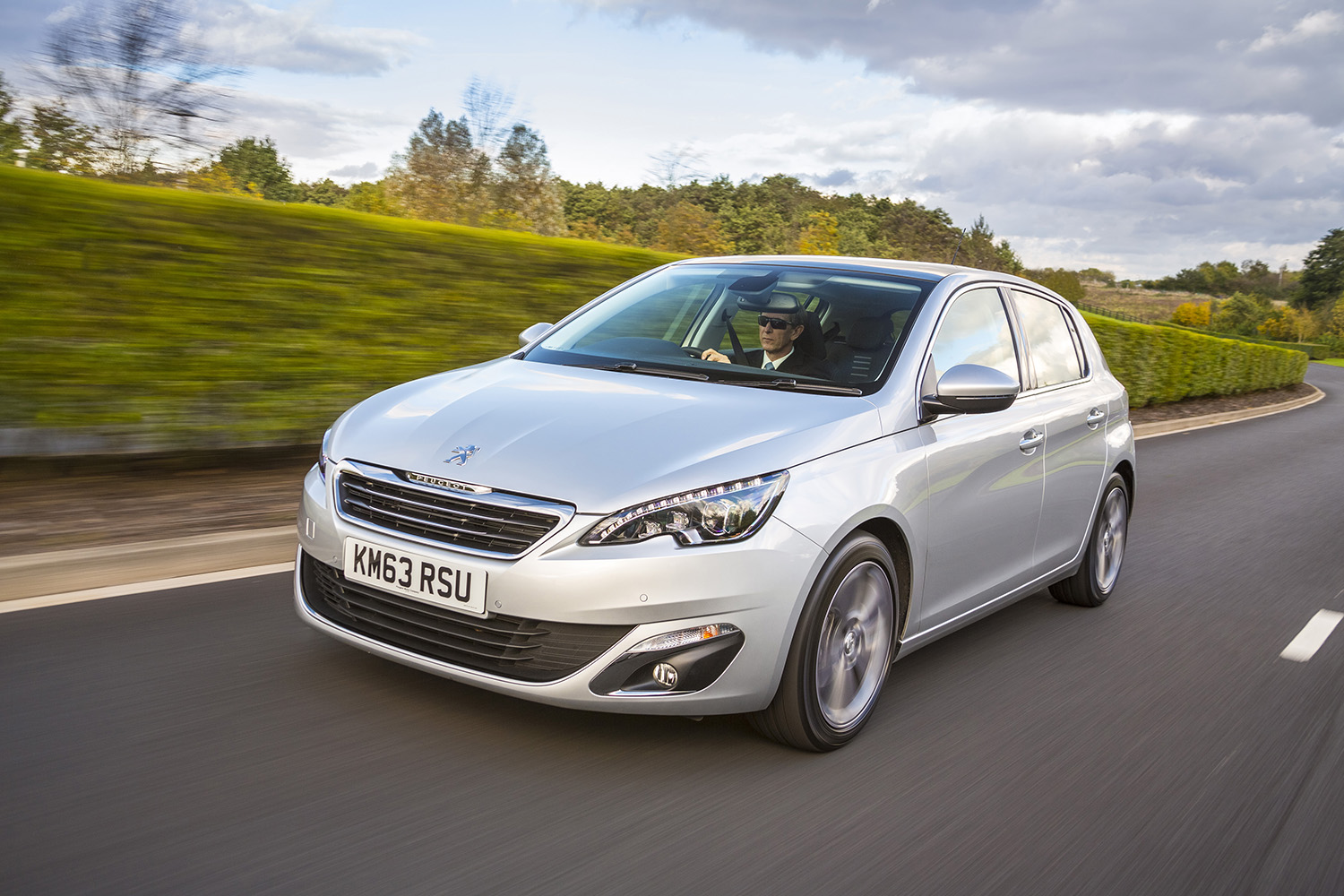 The name might be familiar but the car is all new. The 308 is Peugeot’s bid to take its family hatchback upmarket with sleek styling, a minimalist interior and luxury options such as massaging seats and a full-length glass roof. It’s an attempt to lure owners from the likes of the Volkswagen Golf, Ford Focus and Vauxhall Astra, which previously proved much more popular than the French hatchback. The transformation is more than skin deep, too. A new chassis has helped make the new 308 140kg lighter than the previous generation and new, efficient engines will be available from spring 2013, including a 1.6-litre BlueHDi diesel engine, which returns 91.1mpg on the official combined fuel economy test and emits 82g/km of CO2, meaning relatively low company car bills. A 3-cylinder turbo 1.2-litre petrol engine will also be added to the range. These are available to order now but have not yet been tested by Driving. Until then, there’s a 1.2-litre non-turbocharged petrol engine with slow performance figures (0-62mph in 13.3sec) and two 1.6-litre petrol options with different power outputs. There are two 1.6-litre diesel engines, too, either in 92bhp or higher-powered 115bhp form. The first cars will be delivered in January. The bottom-of-the-range Access trim is followed by Active, then Allure. Feline is top cat of the trim levels and includes keyless entry and that glass roof but you’ll pay the price – one that brings the car to the same level as a well-specced Golf.

It seems that Peugeot has focused on salvaging French car makers’ reputations for comfort, rather than driving excitement. The cabin is well-insulated and quiet while the suspension softens bumps and dips in the road well, even though it doesn’t completely absorb them, causing the car bobs up and down gently. It’s a soothing ride apart from the odd moment on fast, undulating roads, too, where it can feel as if the car is floating for an instant before it settles back down. Despite the small steering wheel, which is supposed to make the car feel more agile, the 308 isn’t really set up to whipping down a country lane. The car may have lost weight but it still feels heavy and leans in corners. This robs it of a sense of nimbleness, as does the steering which remains light as you turn the wheel instead of getting heavier. This might be welcome in town but can make driving feel more like playing a computer game. There is good visibility ahead and, once you’re accustomed to the small rear window, behind, too. The biggest problem for many drivers will be seeing the instruments. Depending on your height (smaller drivers seem worst affected), the small wheel can obscure the bottom of the speed and rev counter dials, and most of the digital display. The wheel is unlikely to obscure any vital information, but each one of Driving’s testers found it an irritation that encourages you to take your eyes off the road and crane forward to get a better view. 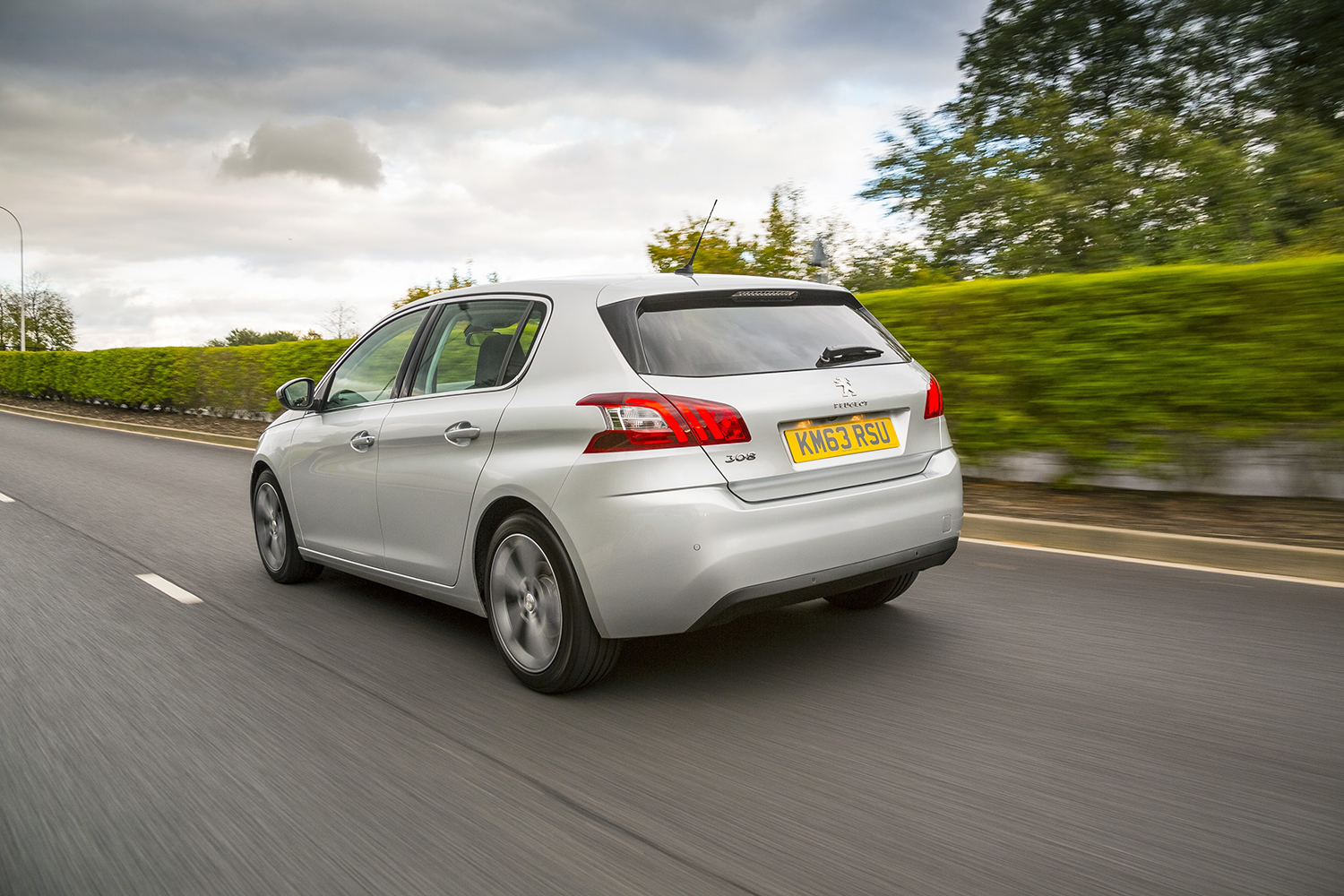 The real trouble for Peugeot is that the Volkswagen Golf and Ford Focus are better to drive. And, at least until spring, both models have a better engine line-up. The current 1.6 diesel engine, for example, is fine in town but lacks immediate power when you want to accelerate at higher speeds, even in its most powerful 115bhp guise. The well-regarded 1.6-litre 125bhp petrol engine is likely to be a better alternative but both the new petrol and diesel engines due in spring promise improved power and economy, so it’s probably worth waiting for them. The 308 boasts of a raft of electronic driving aids, including adaptive cruise control, which will automatically slow the car to maintain a set distance from the one on front, an automatic emergency braking function and a collision alert warning. The cruise control adjusts speed more smoothly than some systems in rival cars but it will switch off, requiring the driver to brake, if the car needs to slow rapidly – by roughly 15mph or more. The package of all three aids is standard with the Feline trim and an option of around £450 on other models.

It looks minimalist, especially with the 9.7” touchscreen in the middle of the dashboard (standard on all but the entry-level Access model). Peugeot describes cars fitted with the screen as having an i-cockpit and the overall design does look slick, with a touch of Apple about it. When using the system, though, you get the impression that it could have been developed further to bring it up to Apple usability levels. Take the ventilation controls. Most car manufacturers allow you to adjust these with a touch for the button or turn of a dial. In the Peugeot, you have to find the symbol on the touchscreen for the ventilation menu before being able to increase or decrease the temperature. As there are no physical buttons, it can’t be done by touch, which forces drivers to take their eyes off the road. The sat-nav menu system seems horribly complicated until you get used to it. The good news is that the sat-nav comes as standard with the touchscreen. 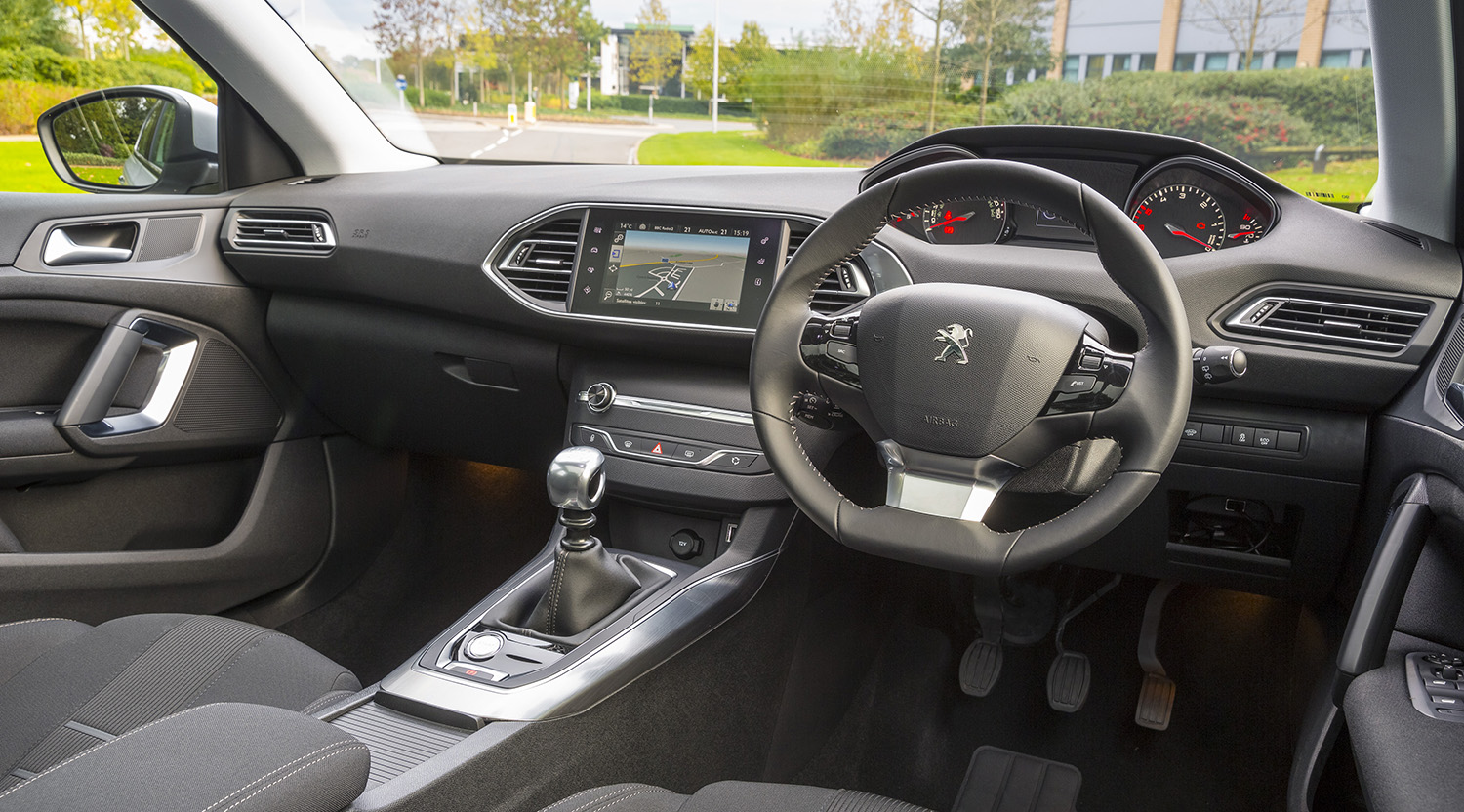 Other usability problems also arose during our test: at night, it’s difficult to tell whether the vents are open or closed and the cupholder in the centre console is hinged above a ‘secret’ compartment where it is easy for objects, like car keys, to fall and remain hidden. Boot space is considerably better than rivals with the seats up; families should find it big enough for all but a load of holiday luggage. As with most cars in this class, the acceptability of the rear seats depends on who you are carrying. Driving’s test of the car included a 150 mile journey with two average-size passengers who had no complaints about sitting in the back. Taller occupants, however, found that legroom was lacking and that their heads touched the roof as it curved towards the rear. When it comes to children, two sets of Isofix points will ensure that their seats are secure.     There are standard airbags for every window, as well as one each for the driver and passenger. The 308 has a top 5 star Euro Ncap safety score. The two mid-range trim options appear to offer the best package. Pick Active and it comes with rear parking sensors, touchscreen, sat-nav and dual-zone air conditioning. For around £1,500 more, Allure adds a reverse camera, electric folding mirrors and sports seats. This higher trim level also offers the option of adding the electronic driving aid pack and, if you really don’t care about the money you’ll lose in depreciation, leather massage seats for £1,500.