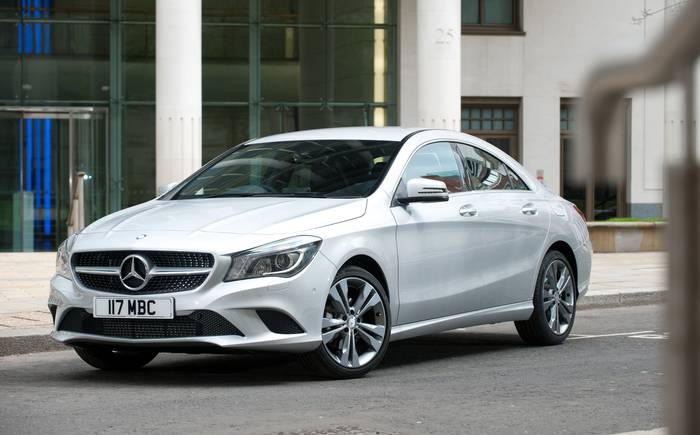 With the C-class saloon already in its line-up (a new model arrives this year), you might wonder why Mercedes considers the similar-size, four-door CLA necessary. On paper at least, the CLA, launched in the UK in March, has to work hard to justify itself. At first, things seem to favour it. The entry-level model, the CLA 180, is £2,000 cheaper than the cheapest C-class, the C180, but longer. However, where size really matters ‒ between the wheels, where it can benefit cabin space ‒ the CLA is shorter than the C-class.  It’s all very confusing.

But focus on the CLA’s styling, and all becomes clear. Yes, that really is a saloon you can see concealed within a swoopy, frameless, coupé profile.  And yes, those really are seductive, sculpted flanks. Rather than the bank managers the C-class courts, the CLA has its sights fixed on younger, more style-conscious customers. Forget crusty trim levels such as SE and Executive; CLAs are badged Sport and AMG Sport, though some are anything but­.

There is a choice of two diesel engines (1.8 and 2.1) and three petrols (1.6 and 2-litre, and the 360bhp 2-litre in the range-topping CLA 45 AMG, capable of 0-62mph in a mind-bending 4.6 seconds). Transmissions come in two forms: 6-speed manual and 7-speed automatic. On the safety front, the CLA is embarrassed by few rivals. All models come with Mercedes’ Attention Assist, Adaptive Brake Assist and Collision Prevention Assist.

It looks sporty and it has Sport in its name but the CLA 180 in particular is powered by a modest 122bhp 1.6-litre turbocharged engine (compared with the 156bhp 1.6 in the C180) that is is very unsports-like, at least until roused by a heavy right foot. Otherwise, it’s slow from the lights and at its happiest holding a 70mph cruise all day in sixth gear, turning over at a lazy 2,000rpm. Plant your foot to the floor and work the long-throw gearstick with vigour, and it reveals some spirit, executing relatively swift overtakes and generally keeping up with the traffic. The penalty is a sharp increase in fuel consumption; you’ll be lucky to see 32mpg.

The steering is a delight. In the way the car turns into corners tightly and obediently, almost as if the back wheels are guiding it around, the front-wheel-drive CLA actually feels like a rear-drive car.  Only two models are not front-wheel drive: the 4Matic, four-wheel-drive CLA 250 AMG Sport and CLA 45 AMG. The CLA’s brakes are immensely strong, with plenty of stopping power in reserve. The handbrake switch on the right of the fascia is a fiddly thing to operate and doesn’t auto release, although there is an auto hold system for hill starts.

The optional manual gearbox in the 200 CDI and 180 models is best avoided. The ratios are all quite tall, with sixth really an overdrive, while the clutch pedal travel is too long, making urban journeys tiresome. Fortunately, the smooth, whisper-quiet engine and the way the car seems to plough imperiously on through gearchanges, are pure Mercedes.

Two ride settings are offered across the range: Normal in Sport models, and a lower but still comfort-biased setting in AMG Sport versions.  Regardless of which one you choose, the ride in both is on the  sporty side of comfortable (firmish but still absorbent). However, show it a broken road surface and the CLA reacts badly, fidgeting noisily like a car from the class below. Still, the optional intelligent light system (£1,430) is a class act, casting a brilliant spread of light that had even the foxes pulling down the blinds on our nocturnal test.

The first thing you notice about the CLA’s cabin is the five propeller-shaped air vents in the fascia. They’re pure Mercedes and a welcome piece of visual drama on an otherwise fairly restrained, but clear and well-organized, dashboard. However, although they’re nicely damped when you turn them, they’re quite plasticky. Worse, their combined effect is ruined by the 7in infotainment screen Mercedes has chosen to attach to the fascia above the middle three, almost as an afterthought.

It’s a well-appointed cabin (highlights include sports seats with integrated head restraints, dual-zone climate control and a three-spoke multi-function sports steering wheel) but beware the options list. The price of our test car was inflated to £33,505, from a list price of £24,355, in some part by the addition of such treats as Lava Black lower dash trim, black roof lining, electrically powered  leather seats and a rear armrest (total cost: £2,770). The car’s enhanced communications system and the digital radio cost an additional £2,520.

The seats are comfortable and well made, but the dashboard and door trims lack that hewn-from-solid quality that Audi achieves. The fascia sounds boxy when you tap it and on cold mornings, when the trim hadn’t yet expanded, we detected a slight rattle. All that said, the interior certainly looks top-drawer.

Front cabin space is generous enough but the CLA’s shorter wheelbase compared with the C-class is noticeable in the rear, where room is at a premium, at least for more than averagely tall occupants. The car’s swoopy roofline also impinges on head room as you pass through the rear doors. Fortunately, Mercedes has thought to provide additional padding around the aperture. The boot is wide but low down and shallow, while the bootlid springs open with enough force to take your teeth out, should you be foolish enough to stand with your chin close enough, peering into the gloomy void.