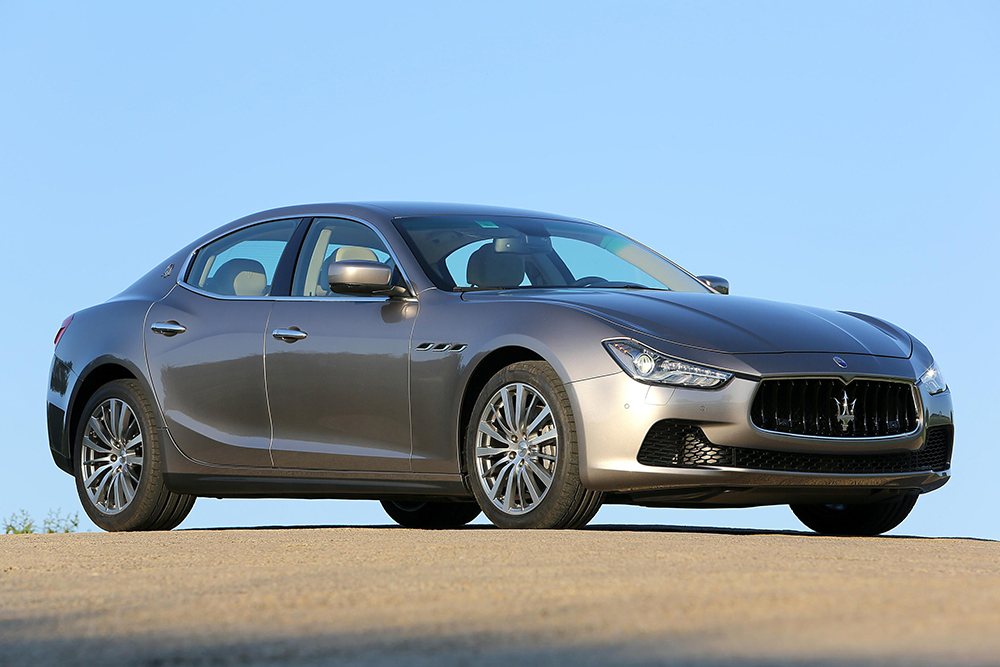 What is the Maserati Ghibli?

The Ghibli is an all-too rare alternative to the sea of German luxury saloon cars on UK roads. It costs from £48,835 and Maserati aims to sell just 1,000 per year in the UK, meaning the model will be a great deal more exclusive than competitors. For example, in comparison BMW sells 15,000 5-series saloons each year.

The question is: what price exclusivity? Even car enthusiasts acknowledge that the brand’s past models have been expensive to buy and pricey to run, thanks to their savage depreciation and high servicing costs. However, according to CAP, an independent vehicle valuation organisation, Maserati is slowly closing the gap on its rivals. Over a three-year period, an entry-level Ghibli diesel – which will account for the majority of sales – will cost £36,662 to own (or £1,018 a month), whereas a comparable BMW 530d M Sport auto will cost £28,236 (£784 a month) over the same period.

Search for and buy a used Maserati on driving.co.uk

Yet a Maserati isn’t a car that is bought solely on the basis of its running costs. It’s a covetable machine; one that is more likely to earn its driver front-of-house parking at The Savoy. And then there’s the cache of the Maserati name. It rolls off the tongue like the name of an Italian opera. The fact that the Ghibli is relatively practical, and priced within reach of more humdrum cars, is an added bonus.

In addition to the diesel Ghibli, which is powered by a 271bhp V6, there is a petrol-powered Ghibli V6 with 326bhp, costing from £52,290. Those who believe that a Maserati should be as sporting as possible can consider the more powerful V6 S with 404bhp and a price tag of £63,435. Both models use a turbocharged, 3-litre V6 petrol engine and, like the diesel, come with an eight-speed automatic gearbox. 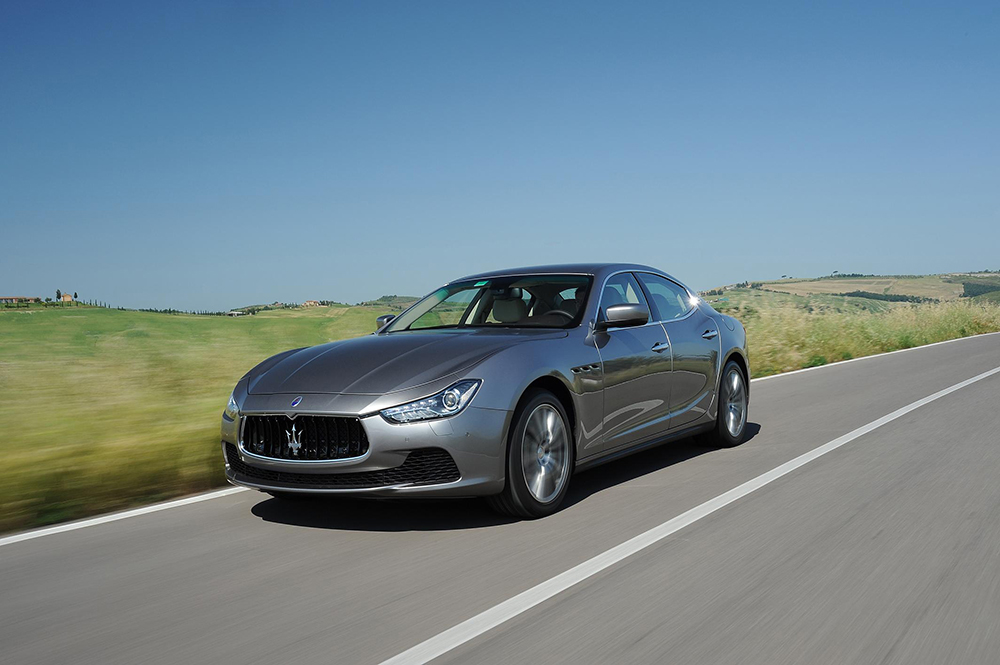 Here, one would assume, is where a company with the pedigree of Maserati would excel itself. But hang on, just how much pedigree does Maserati actually have?

It hasn’t been involved in any significant motor racing activity for longer than most of us can remember (the days of Fangio winning Grand Prix at the wheel of a Maserati are over half a century ago). What’s more, Maserati hasn’t built a sports saloon before – the Quattroporte, the Ghibli’s bigger brother, is, and has always been, a luxury limo. Like any new contender in the large executive car class, the Ghibli has a mountain to climb.

Driving has tested both the Ghibli diesel and the Ghibli petrol. We’ll start with the former, which the company predicts will be the most popular. It offers gorgeous looks combined with sensible running costs thanks to fuel consumption of 48mpg and tax-friendly CO2 emissions of 158g/km. These are not the statistics one usually associates with a thoroughbred Italian sports car, although they aren’t as good as those of some competitor models.

Search for and buy a used Maserati on driving.co.uk

For sheer speed, the Ghibli’s 3-litre V6 diesel engine gives precious little to the straight-six diesel in the class-leading BMW 530d. It feels fleet-footed, accelerating from 0-62mph in 6.3sec and to a claimed top speed of 155mph. However, torque peaks too high in the rev range, at 2000rpm. As a result, the car must work harder to make swift progress, whereas other cars in the class accelerate more effortlessly.

The V6 petrol engine is a little more flexible since it develops its torque from just 1750rpm. It has a satisfying snarl when you put your foot to the floor, yet can cruise with surprising refinement. The problem is that with fuel consumption of 29.4mpg, and CO2 emissions of 223g/km, it is hard to justify choosing the petrol over the diesel Ghibli.

Both versions use an eight-speed automatic gearbox. Other than when the car is pulling away from a standstill, it is generally smooth and responsive. One annoying feature is the electronic gear lever, which never works as intuitively as one that physically moves between P, N and D. Another is the absence of paddles (for manual gearchanging); a major surprise in a supposed sports saloon.

It’s possible to switch the Ghibli between sensible, sedate and sporty driving modes, changes that are reflected in throttle response, steering weighting and gearbox characteristics. Alternatively, a button adjusts the firmness of the suspension regardless of which driving mode is selected.

The roadholding and ride comfort are the car’s weakest points. A Maserati should feel alive. It should dance on roads where German cars merely march. The problem is that the Ghibli’s ride comfort is unsettled, as if the rear springs and dampers were tuned to be stiffer than those at the front. This creates a skittish ride, while bumps or potholes in the road surface jolt the steering wheel violently. And when the temptation to press on overwhelms the driver, the Ghibli’s tail twitches like a coiled rattle snake.

In contrast, a BMW 5-series delivers a far more polished performance in these areas. Memo to Maserati: there’s a long To Do list for your engineers to attend to. 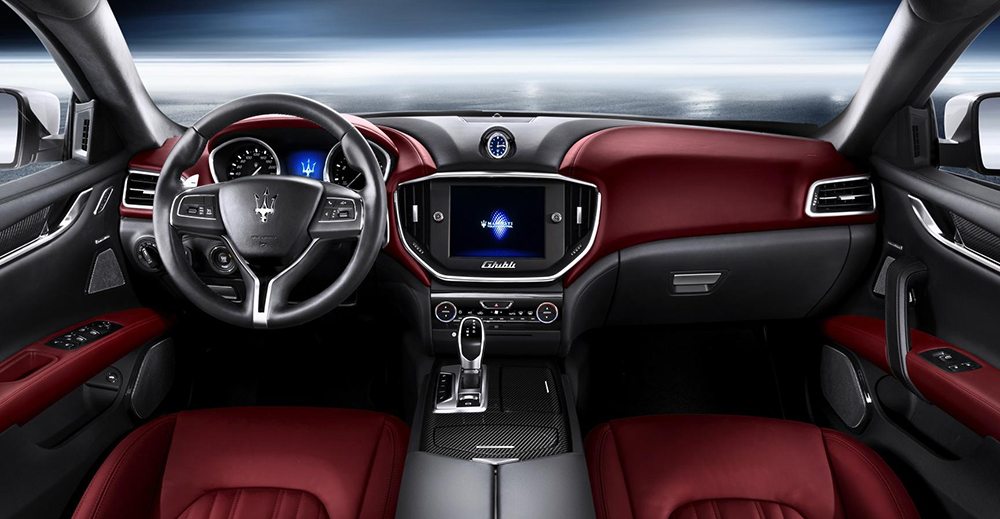 Before we get to the interior, it’s worth mentioning how good the Ghibli looks from the front – with a powerful and distinct face – and how bland it looks from the rear, like a generic Japanese saloon.

Few buyers sitting in one would not compare it to another car. When Audi, BMW and Mercedes build models with interiors of such a high standard, Maserati needs to raise its game.

Some examples: there are two buttons on the steering wheel, with the right-hand one scrolling through the car’s information system (audio, trip computer, fuel economy, digital speedo…) and the one on the left operating the cruise control. On our test car the right-side button worked smoothly but the left one needed forcing before it would respond.

Set the driving position to be comfortable for an average-height driver and part of the analogue speedometer (between 40 and 90mph) is hidden from view by the rim of the steering wheel. The fittings for the climate control system look expensive but other switchgear, such as the touchscreen infotainment system, dials and stalks on the steering column, feel cheap by comparison.

The driver’s seating position is offset by a wide transmission tunnel, kinking one’s legs to the right slightly. The seats are supportive and offer a wide range of adjustment, while legroom and headroom are both generous. The back seat will carry two passengers (it’s not a bench) in comfort. The boot is a useful 500 litres.

For our money, the Audi A7, BMW 5-series or Mercedes CLS would be more satisfying cars to live with.