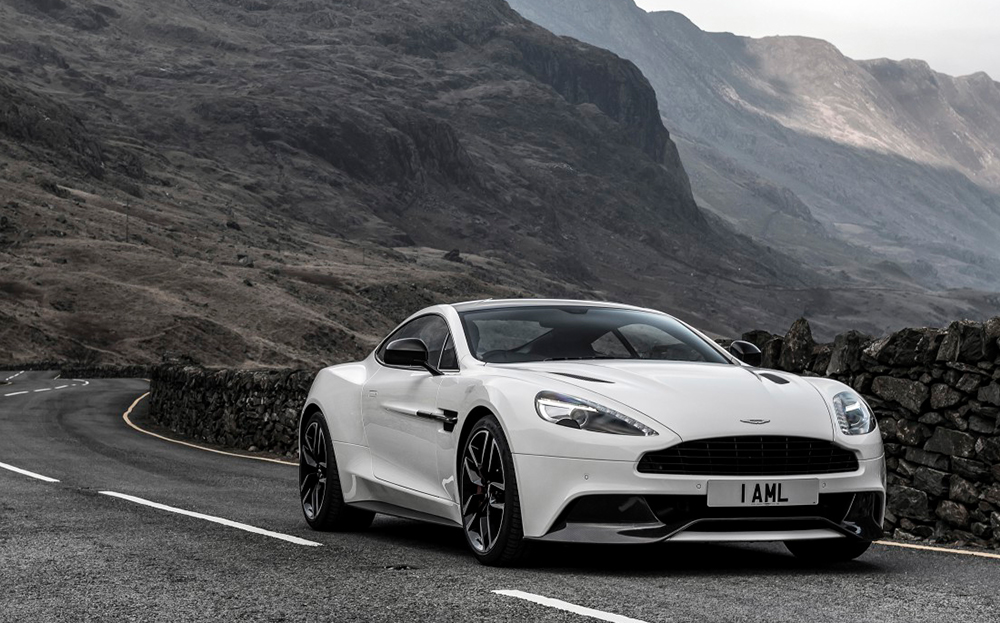 By Guy Martin
Share Article
The best thing this side of my Transit
Pros
Unbelievable pace
Easy to control at speed
Decent fuel economy when cruising
Cons
Will it prove reliable?
An Aston should never be white
Have you lost sight of what a pound is worth?
Cars > Aston Martin > Vanquish

I HAVE a bit of history with Aston Martins. I bought a brand-new V12 Vantage in 2009 — the first privately owned one in the country, I was told — when I was 27. I paid plenty for it too — £136,000 — but it was a disaster. One niggly thing after another. When you pushed the door handle, the window was supposed to go down so the door opened, but the window wouldn’t go down so the door wouldn’t open. Also, the seats wouldn’t move, someone had power-polished through the paint on the sill, the brake lights would stick on and the thing wouldn’t start.

After two years I’d done less than 3,000 miles in it. One day I was at work at Mick’s truck yard — Moody International in Grimsby — when someone came to buy a load of wagons. They knew I had this car. At the time it was parked in a barn at the farm of my then girlfriend’s parents and covered in bird muck. The truck buyer made a bid on it. It was daft money, an insulting offer, but I told him: “Take it — I can’t be bothered with it.”

Someone worked out the car had cost me £20 for every mile I did in it in depreciation.

I realised I was happier with my Ford Transit van. My latest one has done 75,000 miles and not missed a beat. And it does 40 miles to the gallon. That van is the benchmark now. Anything I ever drive will be measured against the Transit.

So that is the background to my taking delivery of £200,000 of Aston Martin Vanquish Carbon Edition. It’s very similar-looking to the V12 Vantage, but a bigger car.

Despite my experiences with the Vantage, I had been window-shopping for a Vanquish for the past year, but my boss, Mick, put me off, telling me that I’d lost sight of what a pound is worth if I signed up for another Aston.

This version of the Vanquish has carbon-fibre body panels in either white or black. The white was a turn-off. And it also has red brake callipers, making it all look a bit, “Can you see me? Here I am.” Astons shouldn’t be white. Perhaps the company just chose to send white because it was a press car and would photograph better. 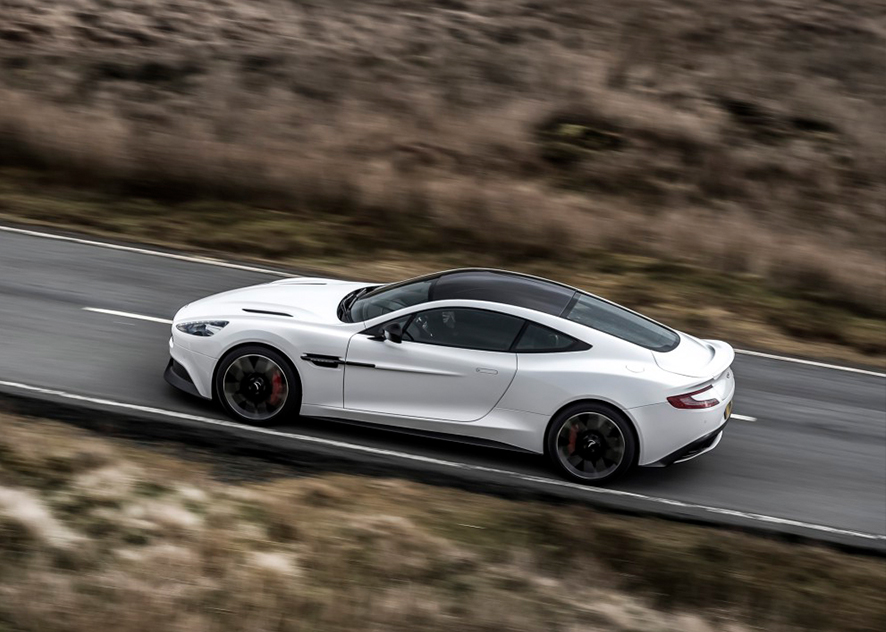 I had a plan for some of the days I had the car. I would drive from Lincolnshire to Anglesey to catch the ferry to Ireland to visit my girlfriend, Sharon, in Dublin. Then we’d drive up to Moneymore, in Co Londonderry, to see TAS, the motorcycle racing team I ride for. Next we’d get the ferry back from Dublin to Holyhead and drive to Liverpool for another ferry over to the Isle of Man for a racing club’s dinner we were invited to.

The first day the Aston arrived I had to go from my home in Lincolnshire to Gloucester to see another race team I was dealing with. I should have been champing at the bit to go in the Aston, but I left it on the driveway and took the Transit because I thought the driving experience would be better. Now I’ve driven the Aston I might have been a bit hasty in that judgment. It’s better than the Transit — it’s brilliant.

I think the fuel economy is so good because of the knock sensors Aston has fitted. Like a lot of modern units, the engine can run very lean without fear of damage because if the sensors detect knock, or pre-ignition, the unit adjusts the fuel injection and/or the ignition map to enrich the mixture or delay the spark — or both. Knock is fuel igniting in the chamber before the spark ignites it. Then the spark ignites, so you get in effect a double explosion, and it overheats the combustion chamber and melts stuff. The knock sensors let the engine run lean, and the Vanquish uses the minimum amount of fuel for the maximum output.

As soon as I passed Union Mills, onto a section with no speed limit, I thought: “Right, let’s have it.” And, bloody hell, it goes

I was impressed by how comfortable the Vanquish is. The seats are made of carbon fibre, racing style, and don’t recline like normal car seats. They tilt back, but the base tilts with them, so your thighs are raised as the seat back moves. It didn’t matter, though. And I was surprised I didn’t have to creep over speed humps. It’s a usable car.

When I realised I was taking it to the Isle of Man I knew I’d have to make time for a lap of the TT course. Our boat out of Douglas was at eight on Sunday morning, so we had to be at the terminal for 7am. I got out of bed at 5.30, leaving time to do a lap of the TT and get back to the hotel. During TT week a lap takes about an hour in a car, but I can do one in something like 17½ minutes on my racing bike, on closed roads.

I thought it was probably better Sharon didn’t come. I knew from the off that if I left as early as I could, the roads would be quiet. It was 6am when I pulled onto the track. I knew I wouldn’t be able to do 150mph down Bray Hill because there are traffic lights at the bottom, so I joined at the garage at Quarterbridge, a mile or so from the start line. As soon as I passed Union Mills, onto a section with no speed limit, I thought: “Right, let’s have it.” And, bloody hell, it goes.

There’s a button on the steering wheel to stiffen the suspension and another to select Sport mode, which lets the engine rev higher before it changes gear and alters the throttle response. There’s no need to use the gearchange paddles. 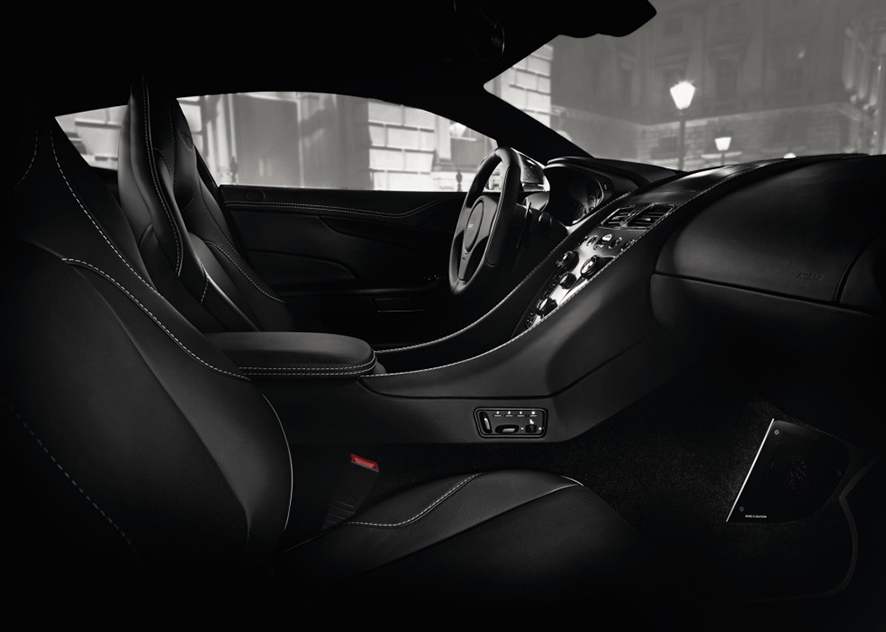 The sun was just about coming up, but I knew where I was going. It was 1C or 2C, so the road was cold, but Aston Martin had fitted tyres that work better at lower temperatures.

I’d given it the berries in Ireland, and thought it was nippy, but until I was on this lap of the Isle of Man, I didn’t know how fast it really was. I couldn’t believe it. The Aston has such extremes. In automatic it’ll drive as nicely as a Transit van — comfy enough and the radio’s good — but then you stiffen it up and press the Sport button and the thing is a Formula One car. It would give a superbike a run for its money.

The big, ventilated carbon disc brakes, with six-piston callipers in the front, are so strong they suck the eyes out of your head. I had a fair bit of fade with them at the end of Sulby Straight and over the Mountain, the pedal moving a lot further than it had before. It never gave me any worry that I was going to run out of brakes, but I knew they were getting hot. The Vanquish weighs nearly two tons, so there’s a lot of car to stop.

I saw 180mph down Sulby Straight, one of the fastest sections of the course, and the car wasn’t even in top gear

About 17 miles into the lap there’s a corner called Ballacrye, a fast left out of the village of Ballaugh. On a 1000cc racing motorbike you get into fifth gear, licking on at 170mph-plus, and you just get around there flat out. On this Sunday morning I just got around it with the accelerator flat to the floor. There’s a jump after the corner, and the car was off the ground, all the lights flashing on the dash telling me everything was dropping off. It fishtailed when it landed, but there was so much feedback from the Aston I felt totally in control.

I wouldn’t have thought a car as big as this would give so much feedback, but I could feel everything that was happening at all four corners. When I was braking deep into a corner and turning, the Vanquish wanted to push on with understeer, but I knew what to do because the car was talking to me. I came off the throttle slightly and took some of the steering off. When it feels as though you need to turn the steering wheel more, to make up for the understeer and get it around the corner, you actually need less steering, and that lets the tyres bite. I was feeling all this through the seat of my pants.

I was driving hard by this time. I saw 180mph down Sulby Straight, one of the fastest sections of the course, and the car wasn’t even in top gear. Aston claims a top speed of “200mph or above”. It’s the quickest-accelerating road car it has built, that’s for sure.

Out of Ramsey I was getting excited. I had a feel for the car and the Mountain is a fast section with good visibility and few blind corners. The sun was reaching the side of Snaefell and I thought: “I’m going to let it have it now.”

Sport mode will let the car slide and then the traction control will cut in and square itself up. I’m not a good enough driver to trust myself with all the systems off. I wasn’t going to take the risk at 1C on the Mountain in a car that wasn’t mine. 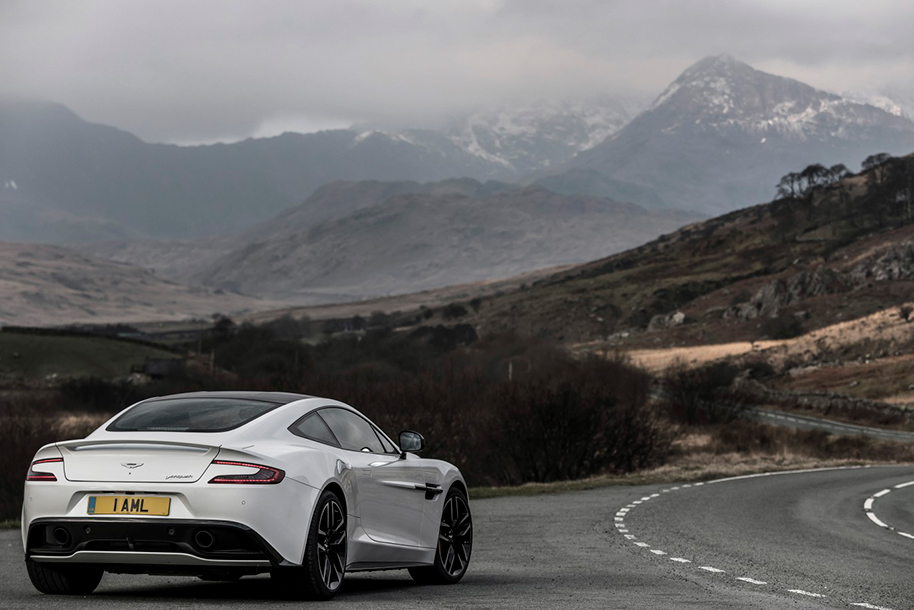 I turned off at Governor’s Bridge, within sight of the grandstand and the finish line, and drove very slowly back to the seafront. I was revving with excitement. I hadn’t been trying to set a time; I’d just wanted to see what the car would do on a road I knew well and it was something like a 22-minute lap. (The rally driver Mark Higgins holds the official car record of 19 minutes and 26 seconds in a Subaru BRZ.)

The Vanquish was thirsty, though. The V12 did 8mpg on that lap. It used half a tank, but it was more than £45 of fun. I was properly impressed with the car; it made me seem a better driver than I am. I’m not scared of stuff, though — that’s my problem. Anyway, I wasn’t late for the ferry.

Would I buy one? Maybe, but I still feel: once bitten, twice shy. I still had the Aston Martin when it was time to take Sharon back to the airport, but we went in the Transit. The Aston isn’t that good.