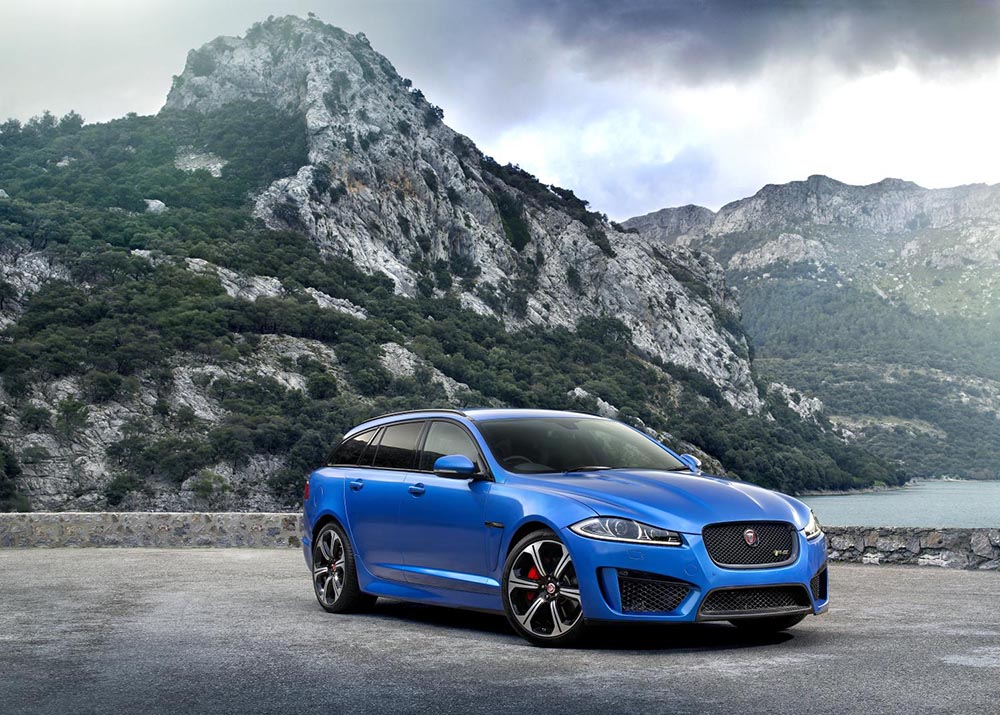 IF I owned a Jaguar estate car, there would be loads of things I might do with it. Fill it with my family and drive somewhere nice. Stick my dog in the boot and reluctantly allow him to scuff up the carpeting and smear the windows with his nose. Hell, if I were feeling really wild, I might even click up the electronic tailgate, deploy the handy flippers just inside the boot rim for effort-free rear-seat flattening and fill the space with sacks of rubbish from the garden. What’s an estate car for, after all?

And all the while I would be enjoying the easeful well-upholsteredness that comes as standard with Jaguars, along with the idea the badge still smoothly imparts that I too am easeful and well upholstered.

The supercharged engine sends the car mercilessly to 62mph in 4.8 seconds and then burns on all the way up to 186mph. This is faster, really, than anyone’s garden rubbish needs to go

Call me deeply suburban, but what I probably wouldn’t do is thrash it round the Nürburgring, the most demanding racetrack known to man. For one thing, I might scratch it. For another, I might pile it — and myself — irreversibly into the Armco. And who would take the garden rubbish to the recycling centre then? 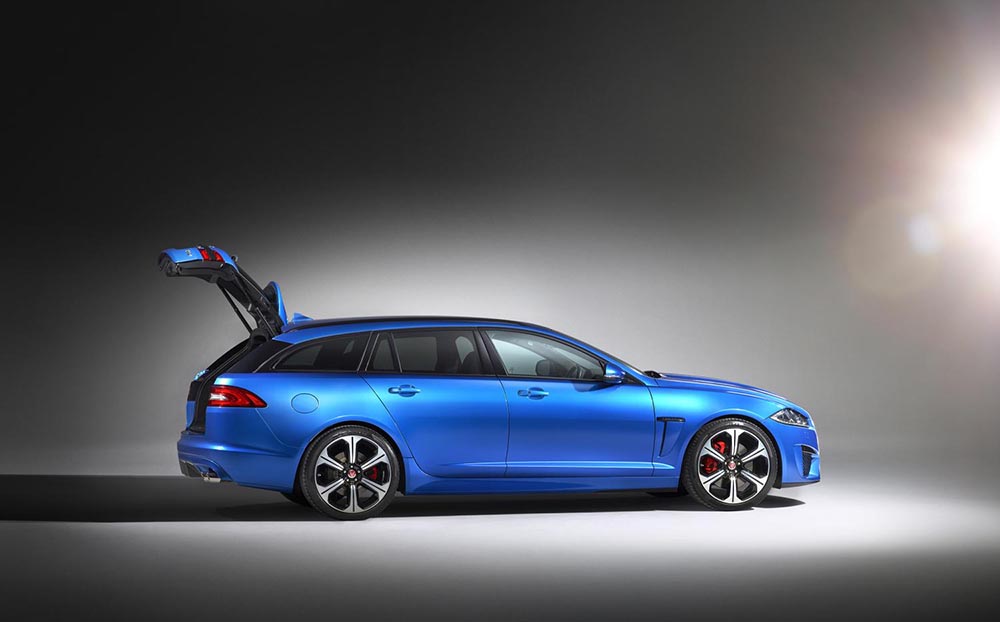 Still, this was the treat on offer to journalists at the recent launch of the XFR-S Sportbrake — and perfectly reasonably. Jaguar has a permanent test centre at the Nürburgring — a cream-coloured, vaguely colonial-style, balconied pavilion that looks a bit like one of Lionel Richie’s spare houses. And this is Jaguar’s first high-performance estate car — the first load-lugger to know the oily, smoke-tinged glamour of a makeover from its Engineered to Order division. Clearly an awful lot of thrashing through German forestry has gone into its development, and it would be rude not to honour that.

Essentially it’s an XFR-S saloon with an added boot but with no loss of power, agility or (by implication) face. All the dynamic aspects have been tuned and tweaked, the use of “unique front suspension knuckles” being among a number of vibrant conversation-starters created in this area. Jaguar has also thrown in some of the mechanicals that evolved during the development of its resoundingly well-received and much-ogled F-type — specifically the eight-speed transmission with Quickshift technology that rips through the gears faster, roughly speaking, than the human mind can compute.

Search for and buy a used Jaguar XF Sportbrake on driving.co.uk

The Jaguar engineers have then plumbed in a 5-litre 543bhp V8 engine that blows down the four-pipe exhaust a robust bass note so rumbling that to stand in the vicinity of a running XFR-S Sportbrake in an enclosed space is to have one’s internal organs gently puréed by the vibrations.

The supercharged engine sends the car mercilessly to 62mph in 4.8 seconds and then burns on all the way up to 186mph, which is where the car’s conscience is finally awoken and the fun is electronically terminated. This is faster, really, than anyone’s garden rubbish needs to go. 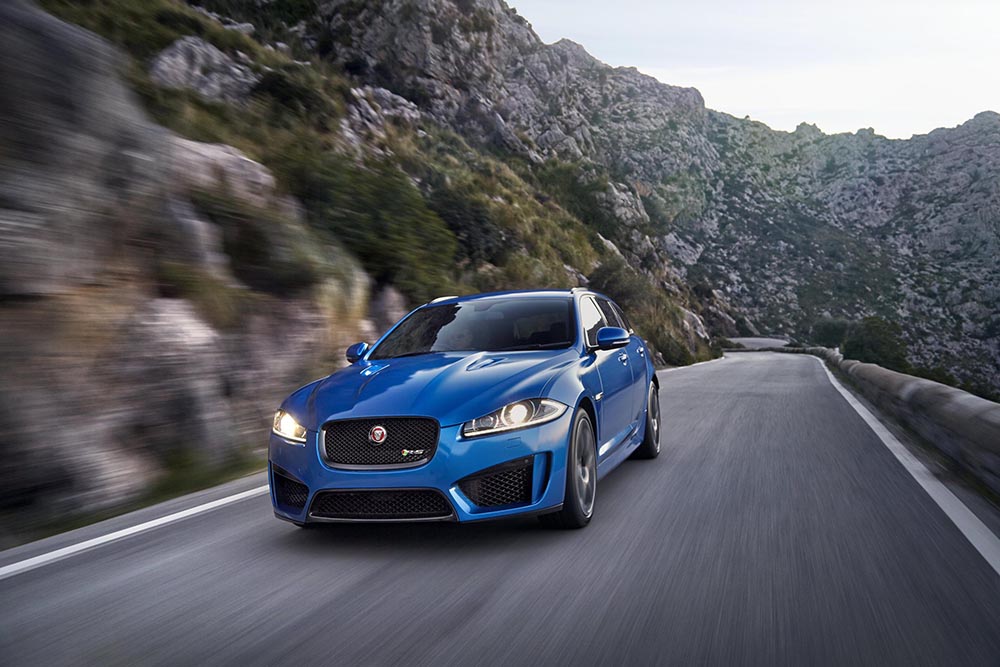 The Sportbrake gets the traditional performance signifiers, both subtle (lowered skirts, carbon-trimmed side power vents, a discreet rear spoiler) and unsubtle (thunderous brake callipers peering hungrily through the bars of two-tone 20in alloys). The dashboard boasts a sultry, “dark aluminium” fascia and the interior generally is a forcefully sung hymn to the timeless allure of leather and carbon fibre.

Taking this further, you also get interior materials such as “carbon leather” — or, in other words, leather that looks like carbon, a hybrid that could have performance-car fetishists writhing on the pavement in ecstasy. Did you ever feel that the only problem with carbon fibre was that it wasn’t leathery enough? And that the only problem with leather was that it wasn’t carbon-fibre-y enough? Here is your material.

So out I went onto the Nürburgring, which has been challenging drivers since 1927 — and very often winning. The pro driver who led our four-car convoy kept up an inspiring tourist’s guide via walkie-talkie.

“This is the corner where Niki Lauda had his big crash.”

Frankly, I could have been in Narnia, surrounded by armies of battling unicorns, for all that I would have noticed. I was too busy cleaving to the steering wheel and trying not to die. To injure yourself horribly in a Formula One car on the Nürburgring . . . you could argue that there was a dignity and even a heroism in that. To injure yourself horribly at the press launch of a new estate car — and on a warm-up, or “sighter”, lap — less so.

No doubt the fact that I returned unscathed is a tribute to the car’s electronic management systems as much as my wheel skills. Either way, both here and on a longer, more leisurely tour through the German countryside, it was impossible not to be impressed by the extent to which this lithe but fundamentally practical lump of metal clamps itself to the tarmac and ripples round corners. 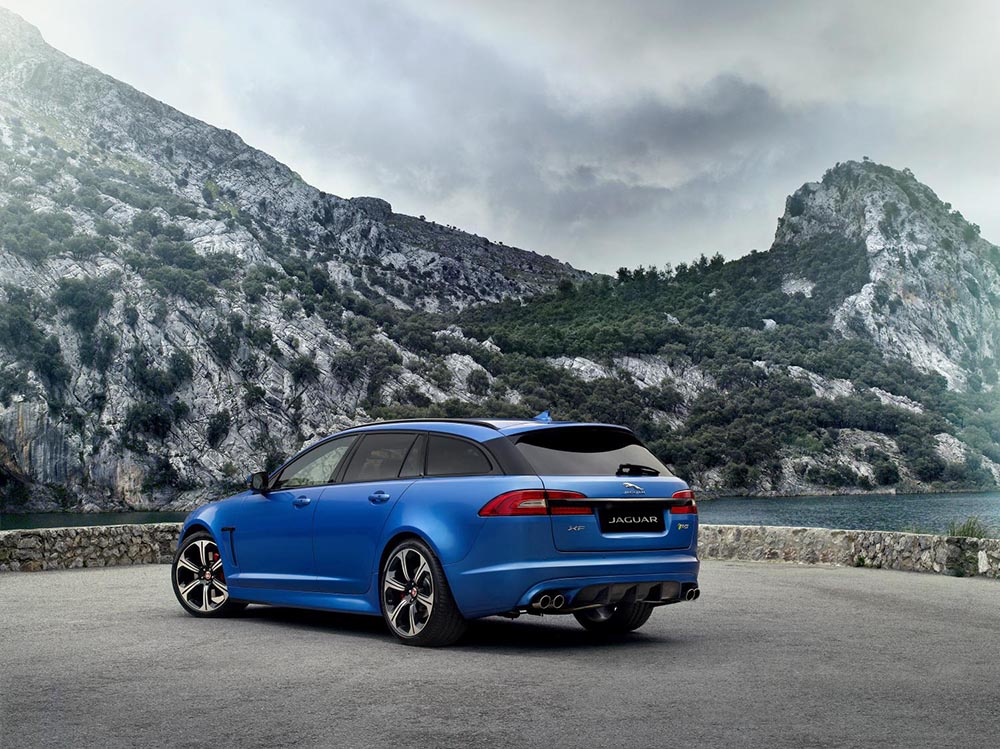 The car’s genius lies in the permanent illusion of compression. The back end feels reassuringly close at all times, to the point where you could be in a hot hatch — and, as in a hot hatch, you have the comfort of knowing that the nearest horizon is only ever one gentle press on the accelerator away.

On the downside, the CO2 emissions are at heritage levels — 297g/km. Remember when cars guffed like that, back in the days of the oil lamp and the steam fair?

Ah, well. I guess you could argue that it ducks below the psychologically important 300g/km mark. And if your dog likes speed he’s going to love it.