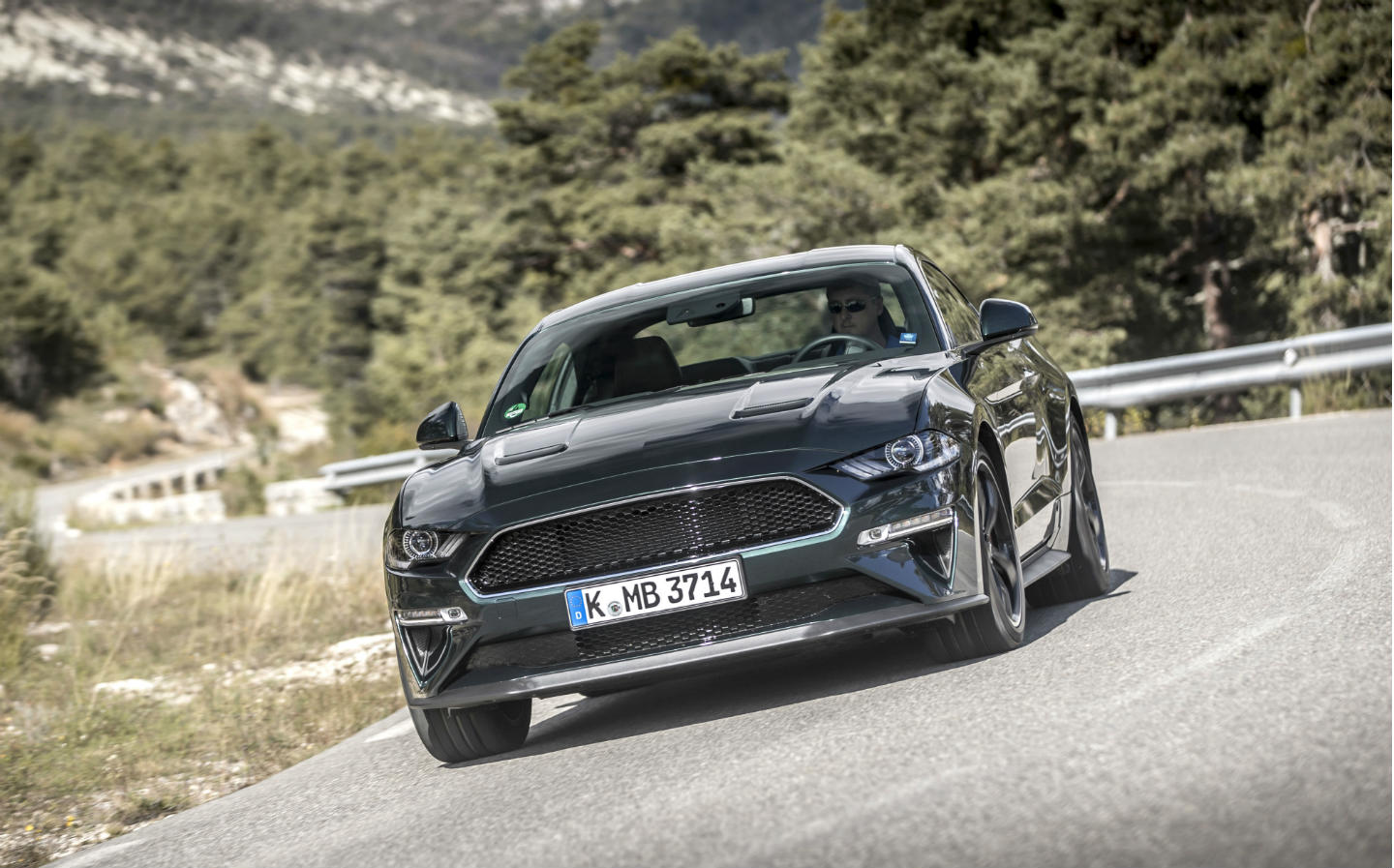 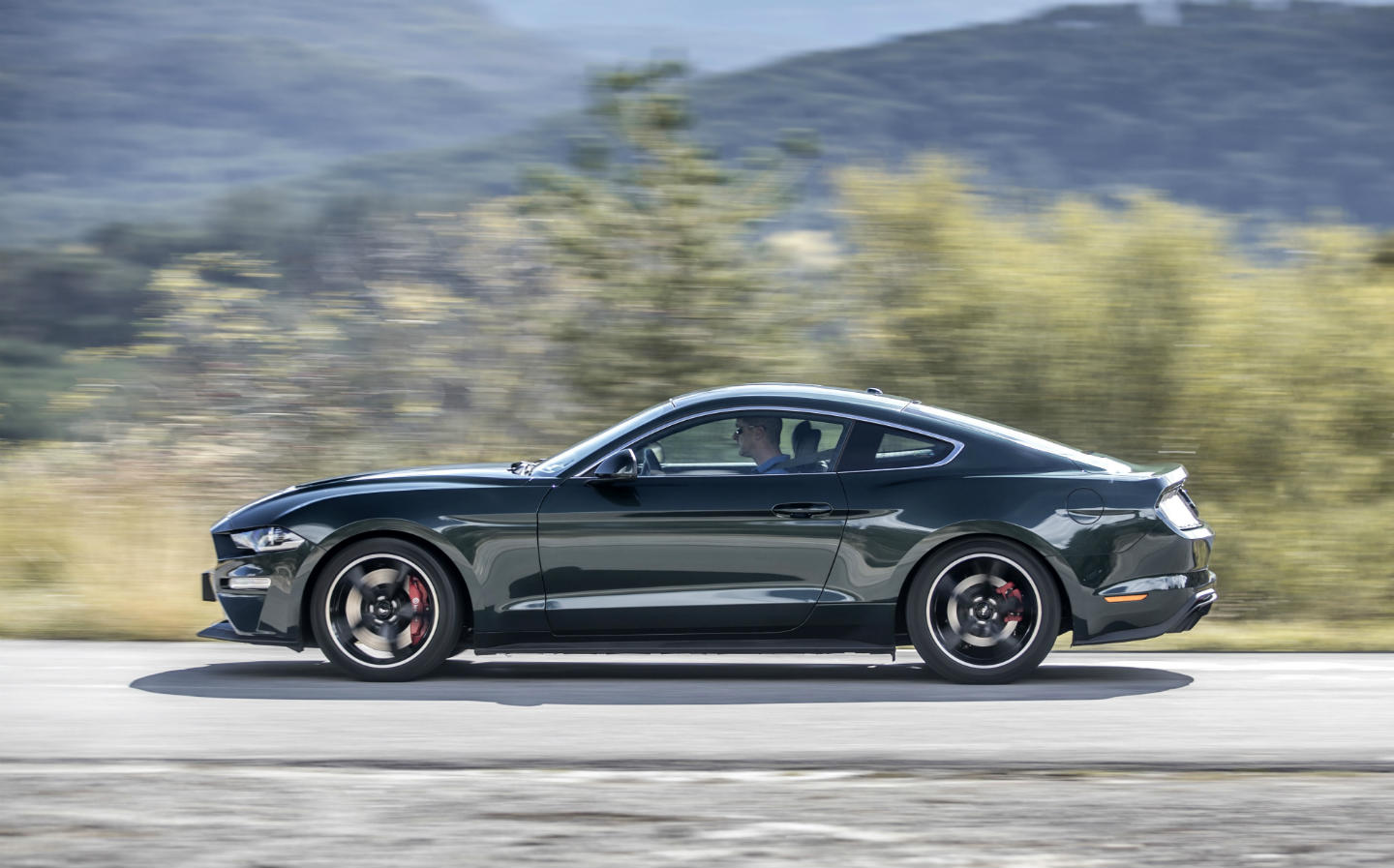 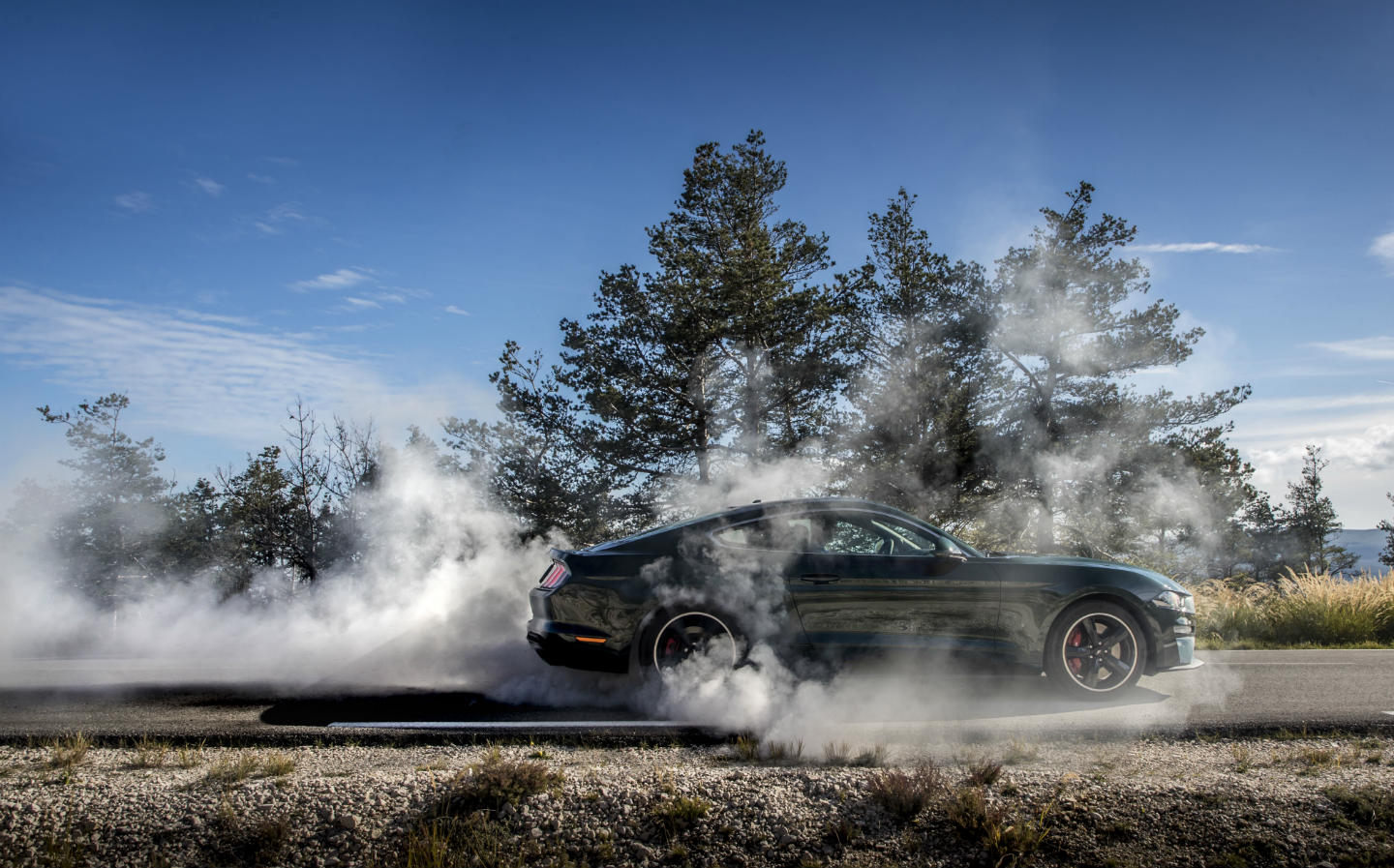 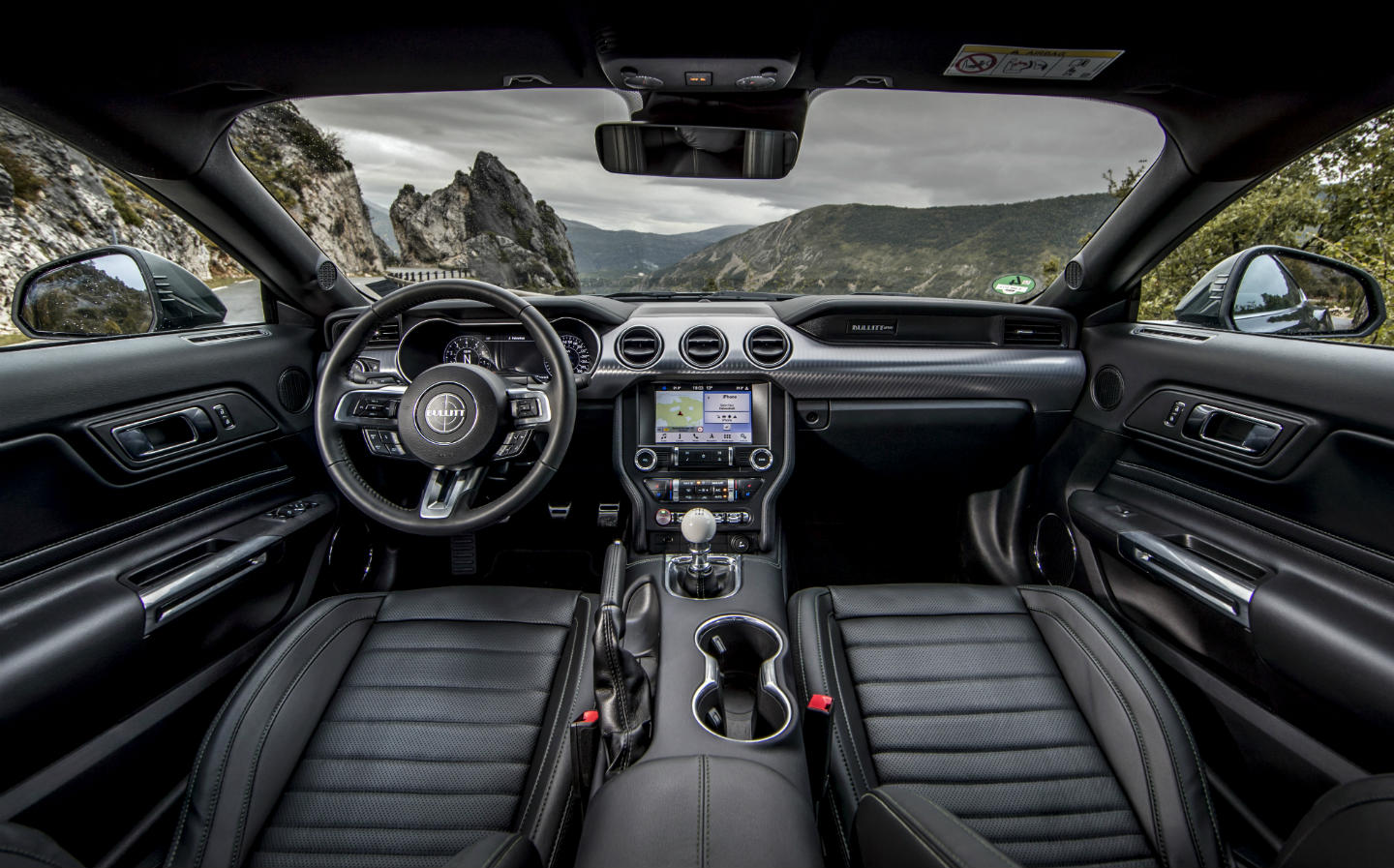 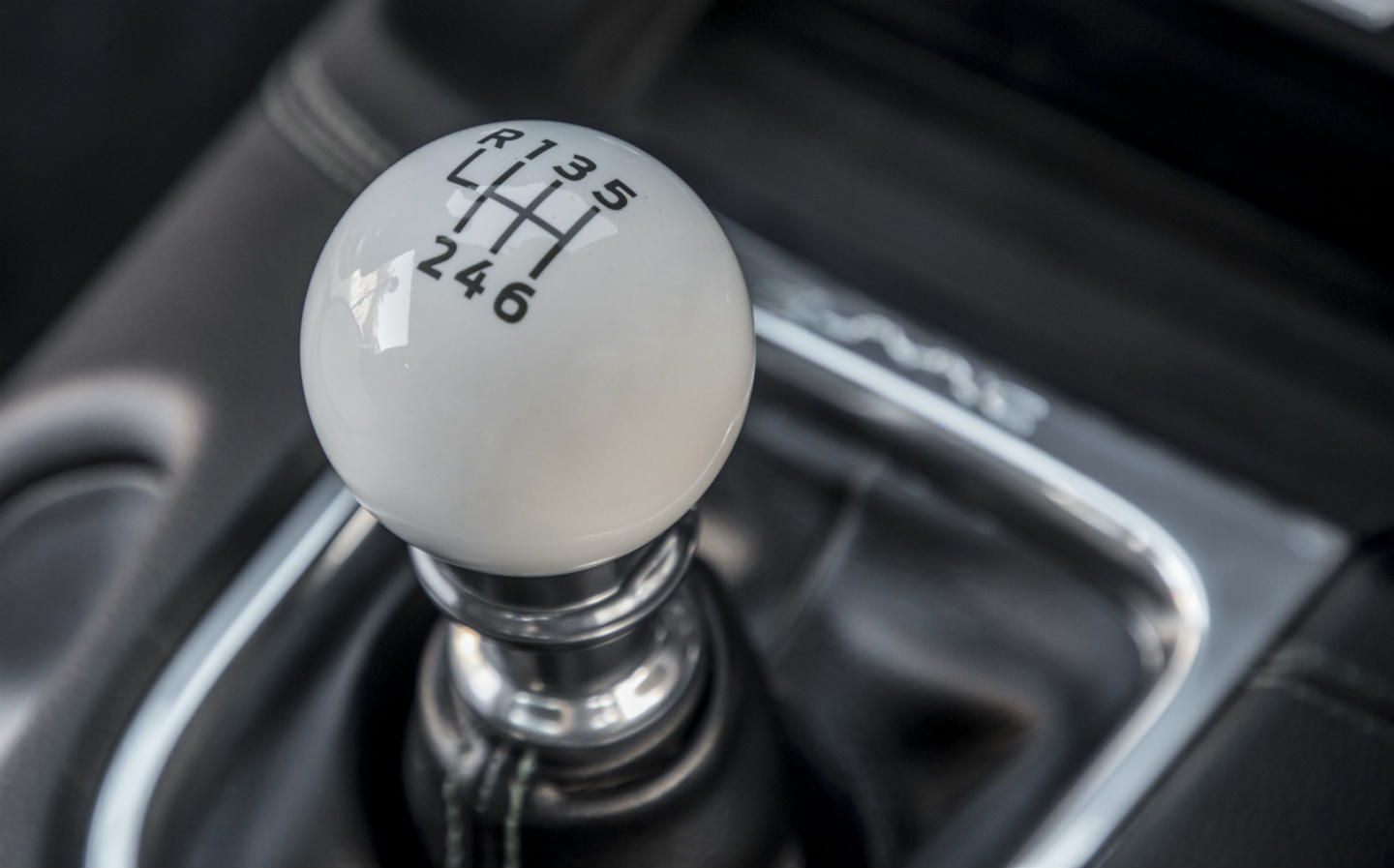 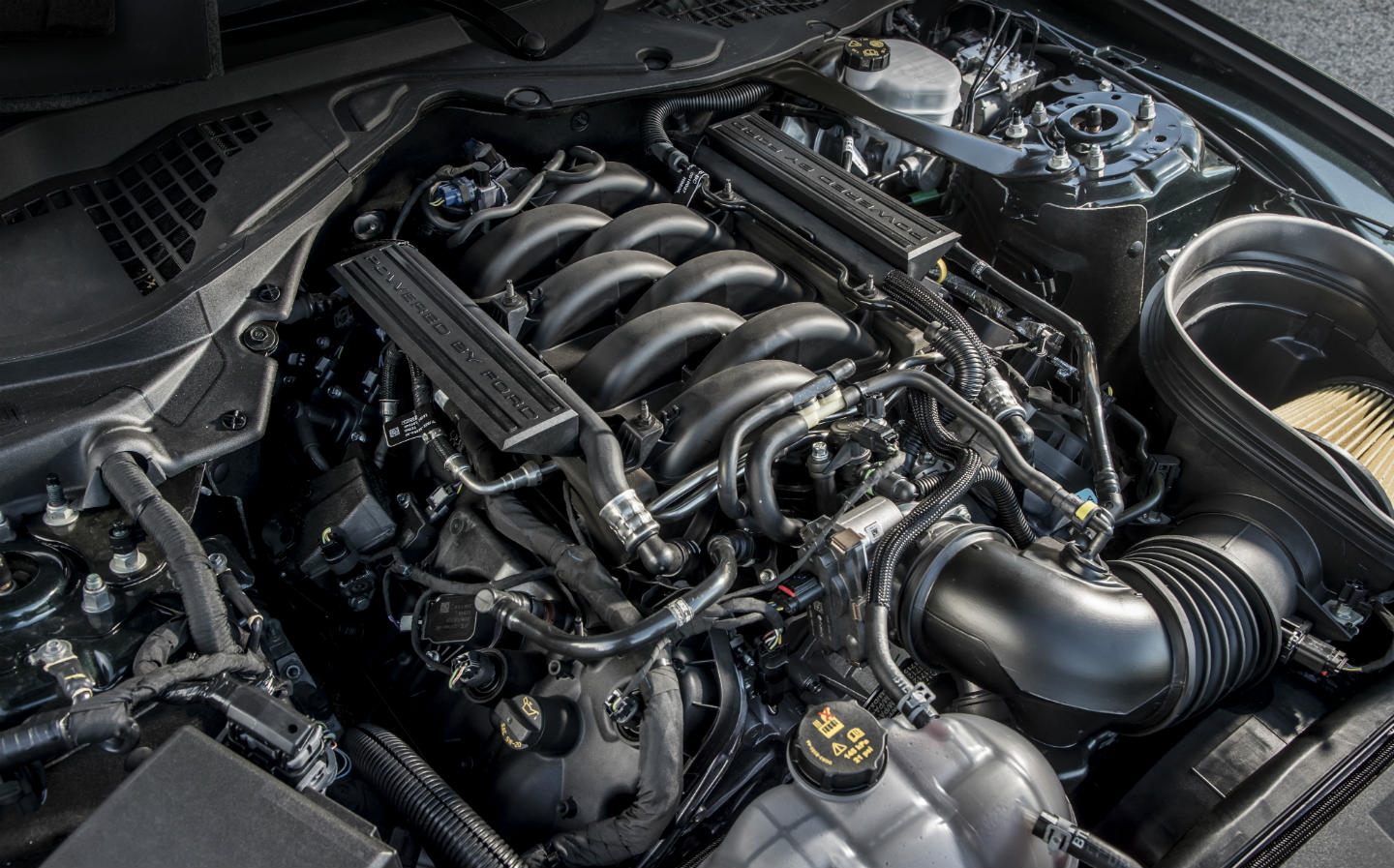 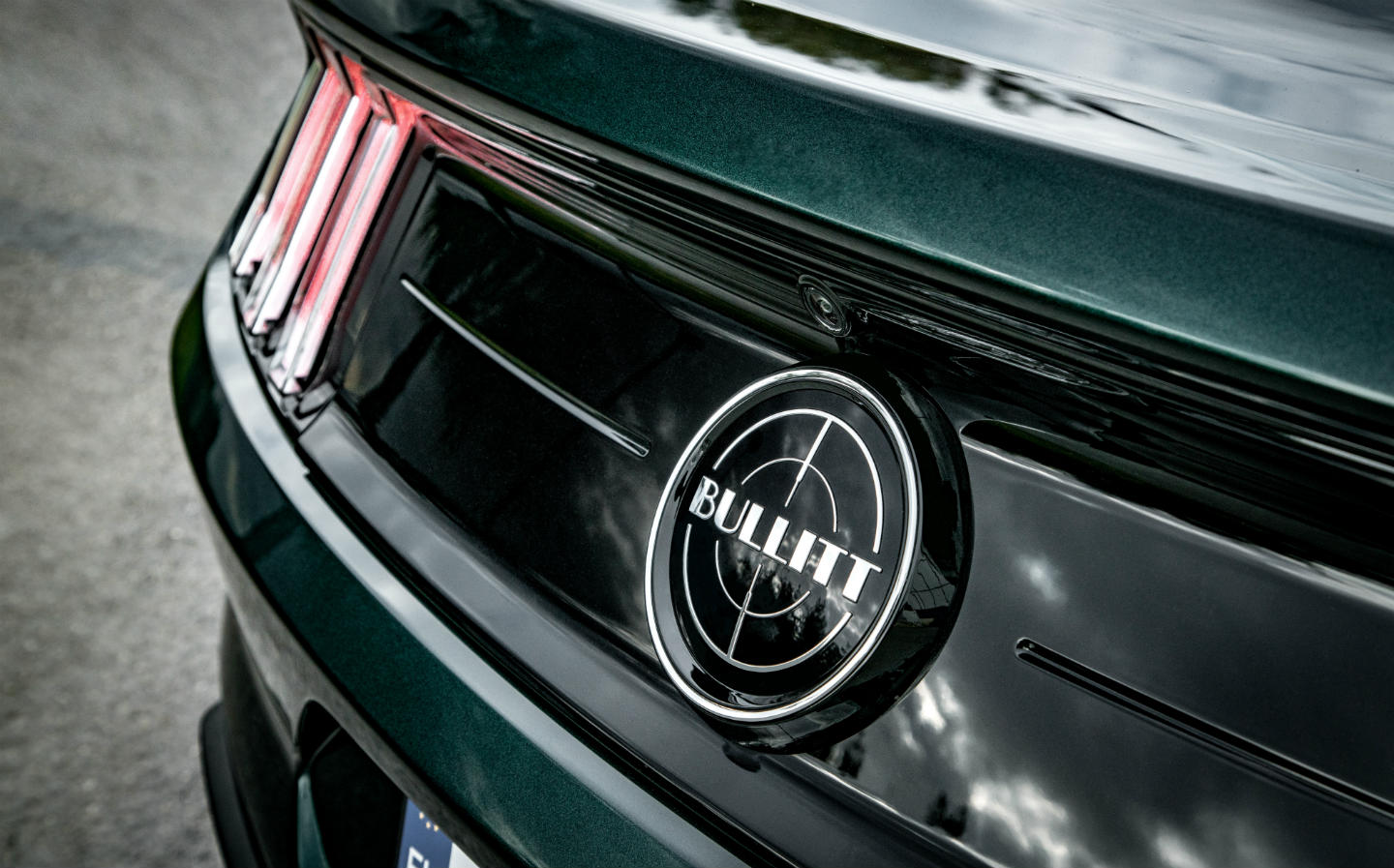 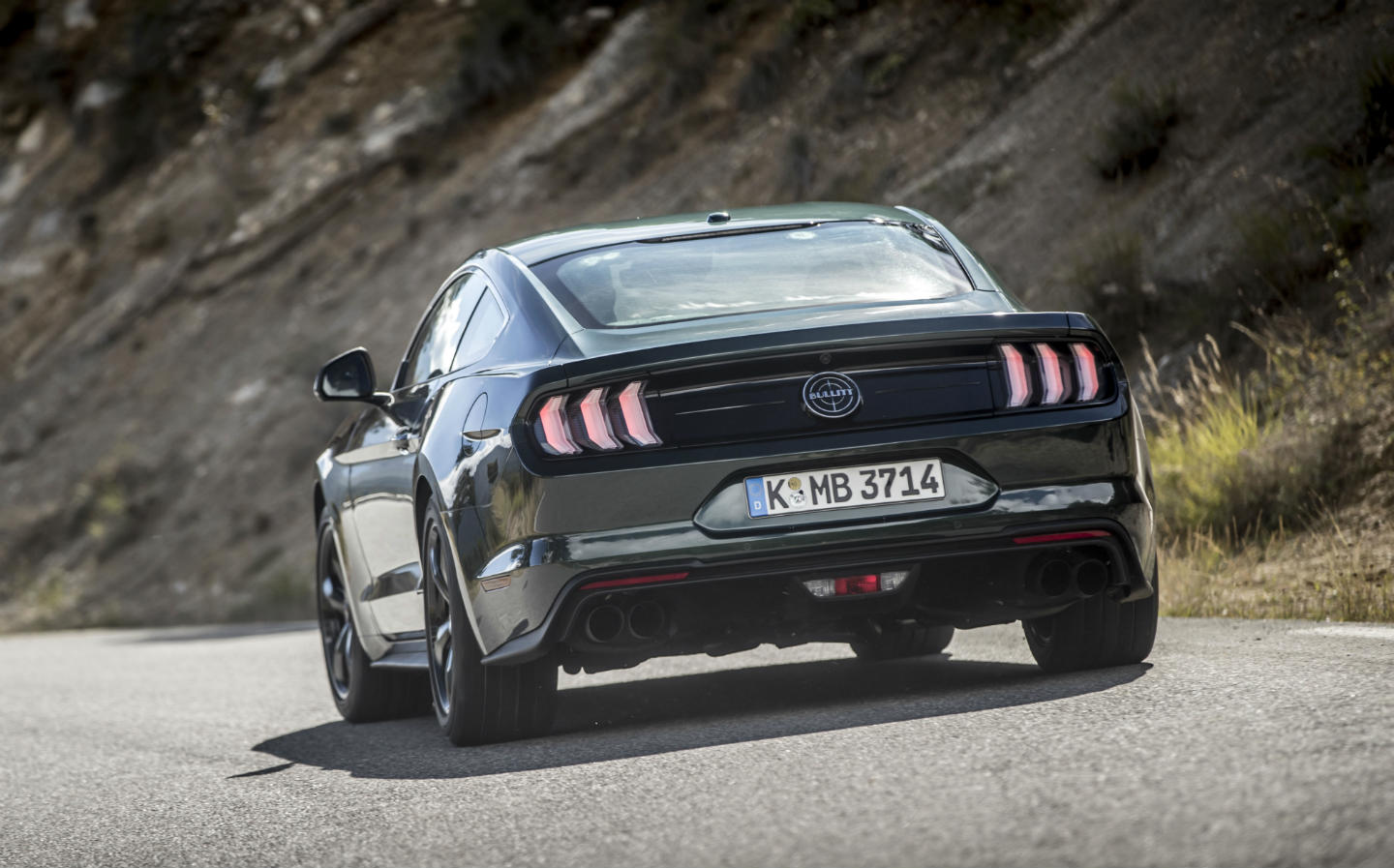 THE MUSTANG Bullitt belongs in the 1960s, tearing down the steep hills of San Francisco in pursuit of a Dodge Charger to a soundtrack of growling V8 engines, squealing tyres and clashing metal. It’s a car designed to be driven wearing a turtleneck sweater and a shoulder holster, à la Steve McQueen in the 1968 film from which it takes its name.

You may wonder why, in an age of fuel economy, tightening road regulations and impending black boxes to keep drivers in check, you would want an American-built muscle car that harks back to a bygone time. Well, that is the reason. The great age of the automobile is coming to an end and there will soon be no more like it.

When you put your foot down, the engine note is a supersize-burger-and-fries experience in a world of diet econoboxes. The only green thing about this car is the colour, copied from McQueen’s Highland green Mustang GT Fastback.

It packs nine more bhp than the V8 engine in the “standard” 5-litre Mustang, which itself is full-fat compared with the entry-level 2.3-litre. The Bullitt’s exhaust is tuned to mimic the soundtrack from the film, which aficionados will know was not from the car McQueen drove but from a Ford GT40. It’s the sound of five litres of fuel and air being mixed, squashed and ignited to create a deep, menacing burble.

Thanks to what Ford boffins called an induction tube, the noise is piped into the cabin so you can savour the experience. If you tire of it — which I didn’t after a week — a 1,000W Bang & Olufsen hi-fi comes as standard, though I don’t remember McQueen having one of those.

As well as launch control, the Bullitt Mustang comes with a feature Ford calls line-lock — possibly the naughtiest thing to be fitted to a new car in decades, in effect locking the front brakes but leaving the back wheels free, so drivers can perform burnouts on deserted airfields (warning: replacement tyres are extra).

There are some neat touches, including green detailing on the leather Recaro seats, black 19in aluminium wheels, and Bullitt graphics on the rear of the car and the steering wheel.

No flappy paddles on this Mustang. It comes only as a “stick shift” — a manual gearbox with a neat cue-ball gearknob that calls on drivers to roll up their sleeves and get involved. It’s good enough to make you want to attach a “Save the stick shift” bumper sticker and practise heel-and-toe downshifts, or even double-declutch upshifts.

This is not a car for collecting flat-packs from Ikea or parking in tight spaces. The noise won’t endear you to your neighbours, though there’s a Quiet setting to soften the exhaust.

A warning: the government does not want you to have this car. It’ll cost you a hefty £2,135 in first-year vehicle excise duty, and £465 a year for five years after that, thanks to the punitive road tax on new cars with a price of £40,000 or more. Yet it still represents good “bang for buck”. You’d be hard-pressed to get similar performance as cheaply. Even the entry-level Jaguar F-type costs more.

The first batch of 400 Bullitts earmarked for the UK sold almost immediately (more are promised), which is, when you think about it, remarkable for a car whose basic design is more than half a century old, with a mixed history of success.

When the Mustang first appeared in 1964, it was the fastest-selling model in the world — a record it still holds. Then the 1970s oil crisis happened and it lost its mojo, for a while becoming just another soulless American “compact”.

More recently, as other classic designs such as the Mini were revived, someone at Ford woke up to the Mustang’s potential and a reworked version was launched in 2015. Ford ditched what the Americans call the live rear axle (a solid axle to which both wheels are attached) and fitted European-style independent rear suspension.

It’s the first new car I’ve driven for a while that comes equipped with an old-style pull-on handbrake — for tyre-smoking turns, obviously

The Bullitt goes one better with a £1,600 option of MagneRide adaptive suspension, which adjusts the dampers up to 1,000 times per second. As a result, the Bullitt is not just a good American car — it’s a good car.

Don’t expect it to be crash-proof, though. It scores a paltry three out of five NCAP stars for safety (early Mustangs scored only two). In fact, there’s probably a button somewhere that causes it to explode on impact in a cinematic fireball.

Neither is there a camera keeping an eye on the driver to make sure they’re not drowsy or distracted, as there is when you buy a Lexus or Volvo. Quite right. You wouldn’t want the car reprimanding you when you’re swerving around trying to force some shotgun-wielding villains off the road.

Neither will it tell you off for exceeding the speed limit. Clearly that would be a disadvantage when you’re pursuing a pair of assassins.

It’s the first new car I’ve driven for a while that comes equipped with an old-style pull-on handbrake — for tyre-smoking turns, obviously — and even a cigarette lighter.

Despite all this, the Bullitt is not the type of car that will be involved in scrapes — unless it’s stolen. That’s because it won’t be used for the daily commute or plying up and down motorways. It’s for an occasional run out on high days and holidays, for when you just want to enjoy the drive.

It’ll be bought mainly by people who will keep it in a heated garage, clean it on Sundays and show it off at Mustang conventions and country fetes. It’s an endangered species, after all.

It would be nice to say this is the ultimate Mustang, but it isn’t — not quite. There’s a McQueen racing version that’s endorsed by his son, Chad. For an extra £16,000 you get an engine tuned to 550bhp and 20in wheels. You can also opt for vented rear window covers similar to McQueen’s Fastback, and a roll cage in place of rear seats.

The ultimate add-on is a supercharger that takes total output to a tyre-shredding 764bhp. With that advantage, the bad guys wouldn’t stand a chance. The Bullitt car chase would barely stretch to 11 seconds, let alone 11 minutes.

There’s a good deal of hand-wringing these days about the kind of world our children will inherit. I worry, too, that when they grow up they will have to order an autonomous pod via an app on their phone that will travel only at pre-programmed speeds.

When cars are electric and the government can’t raise money from fuel duty, each journey will be monitored by highway authorities so drivers can be sent a road charge bill. Youngsters will listen wide-eyed to stories about how in the old days driving could be fun.

So, before every new car comes with a black box installed, buy one of these and lock it in your garage. When the time comes, break out your turtleneck — and go off-grid.