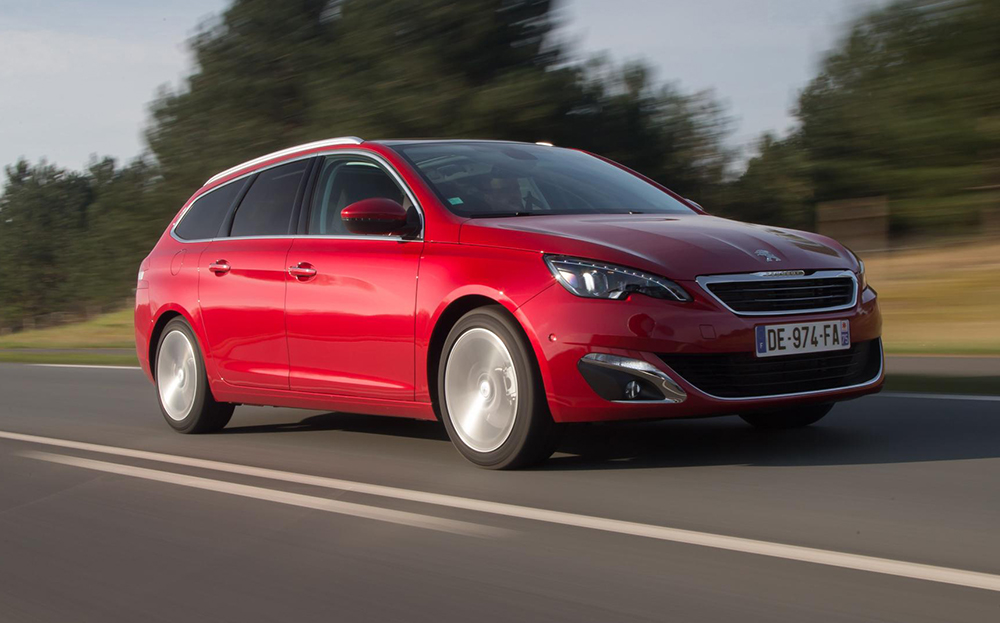 LAST YEAR Peugeot launched the 308 hatchback and loudly trumpeted the company’s simultaneous move upmarket — out of the studio flat where the Nissans and the Fords eke out their existence, and towards the balconied penthouse with the river views where the well-heeled Germans live.

Were people convinced? Well, the 308 is the reigning European Car of the Year, if that carries any weight with you — as well it might, although perhaps, by way of perspective, one should note that the recently crowned European song of the year is Rise Like a Phoenix, an ungainly lump of over-revved Austrian power ballad that this column would have given three stars at best if we had been reviewing it.

Anyway, now here’s the 308 SW, or station wagon, which is where we find out what happens to the 308’s jury-swaying esprit and upwardly mobile ambitions when you slap a hearty boot on the back of it, with a view to using it for the transport of compost sacks and trays of seedlings. (Estate cars can call themselves whatever they like — Jaguar’s XF estate even goes by the name of Sportbrake — but their spiritual home will always be the car park at the garden centre.)

Search for and buy a used Peugeot 308 on driving.co.uk

And what happens when you add a chunk to the back of the 308 is, pleasingly, very little. The bodywork, inevitably, becomes slightly less remarkable. All the snazzy features of the hatchback’s front end — the triple-ridged bonnet, the eager headlights with their LED eyebrows, the fist-sized lion hood ornament — are intact. But as the neutral eye makes its way backwards down the sides, past the enlarged rear doors and round the gentle curve of the universally bland (and surprisingly heavy) tailgate, it could very easily begin to glaze over slightly.

Still, never at any point do you entirely nod off, which is a definite plus, and overall the car bears with remarkably good grace the collateral damage to its sense of humour that takes place of necessity in these transformations from snazzy hatch to pragmatic load-bearer. It still looks plausibly like it might be quite good fun when you get to know it. Especially if you do your best not to look at the back end.

Inside you get the 308’s “i-Cockpit” dashboard, modelled, according to Peugeot, to resemble the control panel of an aeroplane, and thus to speak to the driver’s inner Biggles. Basically this means, as ever, that the dials are set into a hooded, curved-topped slab, and hoisted quite high into the driver’s sight-line above the steering wheel — a kind of halfway house between a standard dash and a head-up display. 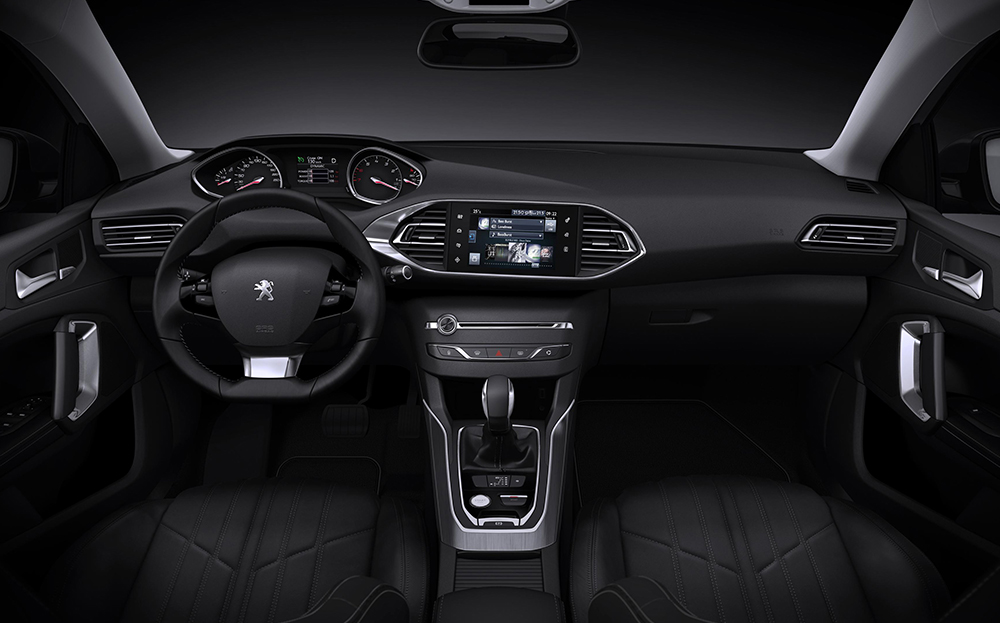 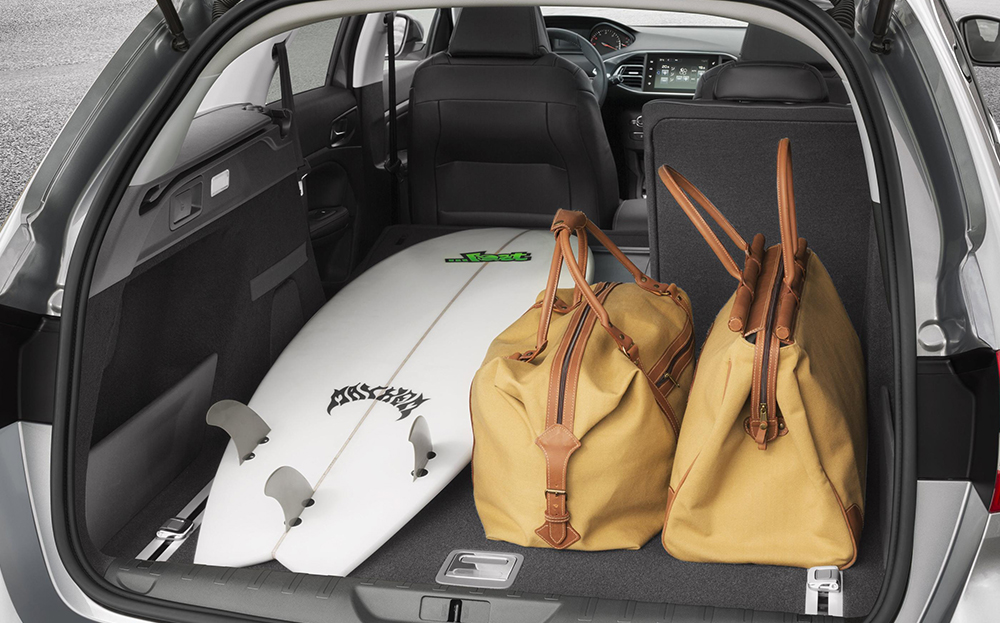 And yet it’s an i-Cockpit, note, rather than a plain cockpit, which means that this retro arrangement is designed to work in tandem with a new-fangled iPad-style touchscreen that would surely have thrown the fundamentally analogue-trained Biggles through a loop.

That touchscreen, incidentally, is slightly foggy to look at, and therefore just shy of properly high-end. (In this regard, Peugeot might want to rethink the load-cover in the boot, which has all the five-star sumptuousness of a roll of cheap wrapping paper.)

Still, the screen removes the need for whole fistfuls of buttons in the interior, and its operation for once seems to justify the use of the word “intuitive”. At any rate, I can report that I managed to accomplish a number of on-the-move changes of radio station very swiftly and without crashing. There are plenty of other cars on the market at the moment, in this age of user-friendly digital devices, of which this cannot remotely be said and in which moving the radio away from Dave Berry on Capital, where your children have left it, can require 15 minutes in a lay-by with the manual open. All credit to Peugeot for leading the way in this.

It still looks plausibly like it might be quite good fun when you get to know it. Especially if you do your best not to look at the back end.

I took my 308 SW into leafy, sun-dappled Surrey, which could teach Peugeot a thing or two about upward mobility, and where I cannot claim that heads noticeably turned in excited curiosity at the car’s passing. But who needs the attention of strangers when the gearshifts are this soft and pleasantly snicky, and when the panoramic glass roof is turning the interior into a sun deck? 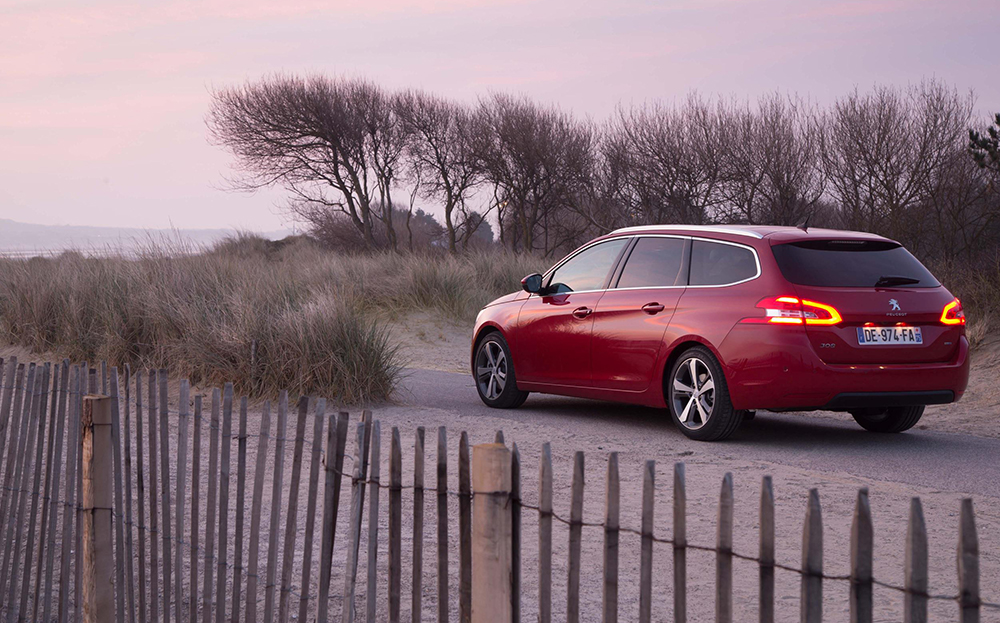 Peugeot is rolling out its new range of planet-sparing PureTech engines — 1.0 and 1.2-litre three-cylinder petrol units. The 308 SW comes with a turbocharged version of the 1.2-litre in two states of tune — the e-THP 110 and the e-THP 130, which I was driving. It was possible to predict that the effect of all that compressed engineering working overtime for your guilt-diminished enjoyment would be a noise like a pneumatic drill in an underpass; actually, it’s a modestly subservient rumble most of the time, tightening to a diesel-like chatter under acceleration.

Meanwhile, the shrunken sports steering wheel, positioned snugly at lap height, is (like the flaps just inside the boot that effortlessly flatten the back seats) a rare joy to operate. So much so that it tempts you into cornering in a rather daring fashion.

An estate car to be slung about the place, then? Why not? Though mind those seedlings.

Search for and buy a used Peugeot 308 on driving.co.uk

Search for and buy a Skoda Octavia on driving.co.uk

For Does pretty much everything ever so well Against Like the Skoda, it can’t match the 308’s fuel economy

Search for and buy a Volkswagen Golf on driving.co.uk