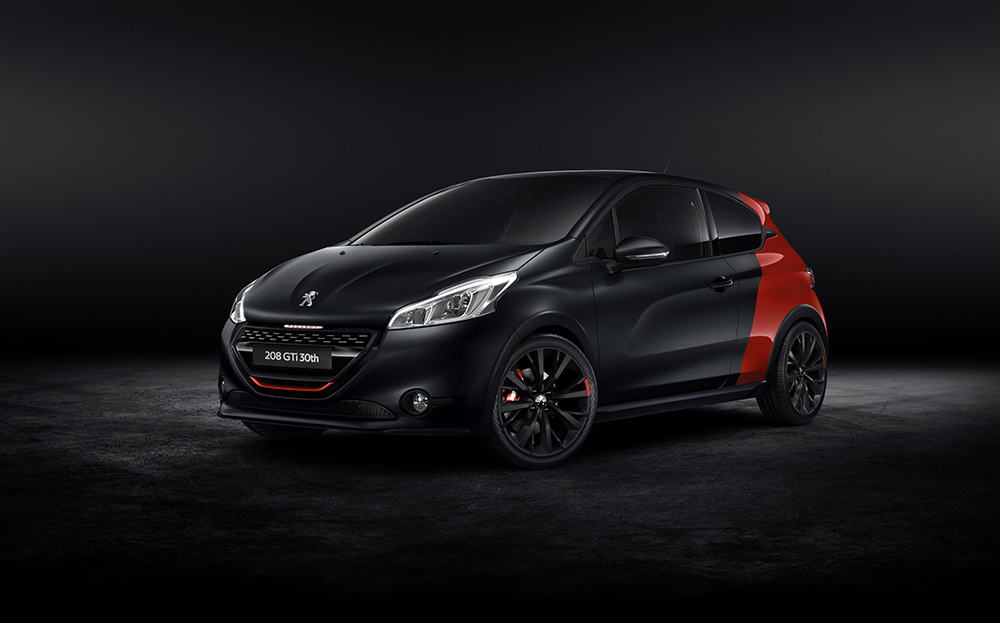 THE HOT hatch returned from rehab in a contrite mood. Subtle, practical and quiet, for the past few years it has been trying to rebuild its image after the grim days of the late 1980s when its reputation was trashed by boy racers in modified machines with whale tail spoilers and drainpipe exhausts.

Ford has brought out its understated Fiesta ST. Renault has a stereo system that makes its hot Clio sound like a supercar – but only to the occupants inside – and Volkswagen’s Golf GTI expresses its sportiness with a thin red line across the grille.

Peugeot, though, has pulled off its hairshirt and launched a lurid special edition that proudly announces itself as a hot hatch. In 12 months, it has sold 10,000 examples of the standard, subtle GTi and has now upgraded it with re-tuned suspension, beefier brakes, more power and an aggressive bodykit to create the 208 GTi 30th.

Browse the used Peugeot 208s for sale at driving.co.uk

The car costs £21,995 – a £4,595 premium over the standard car and it is only currently available in a limited edition of 100. Three quarters of the cars will feature an £800 optional paint scheme, a bold combination of matt black and bright red, which makes it look as if the car is a tribute to that legendary vehicle of the 1980s: Mr T’s van from the A-Team.

Of course, Peugeot hopes that buyers will see the car as a successor of its first hot hatch, the 205 GTi, which is still so fondly remembered that the mere mention of it can make car enthusiasts well up. This is the first time that the 208 GTi 30th has been tested in Britain but the car was launched at the end of last year, 30 years after the launch of the first 205 GTi, which explains its name.

But this is a horse that has been flogged so hard by Peugeot in the past 30 years that it hasn’t realised that it should have been sent to the glue factory years ago. The company has attempted to connect the 205 to virtually every sporty hatchback it has launched for decades.

In reality, safety regulations, emission requirements and changing consumer demands mean that the car – and its spirit are buried. 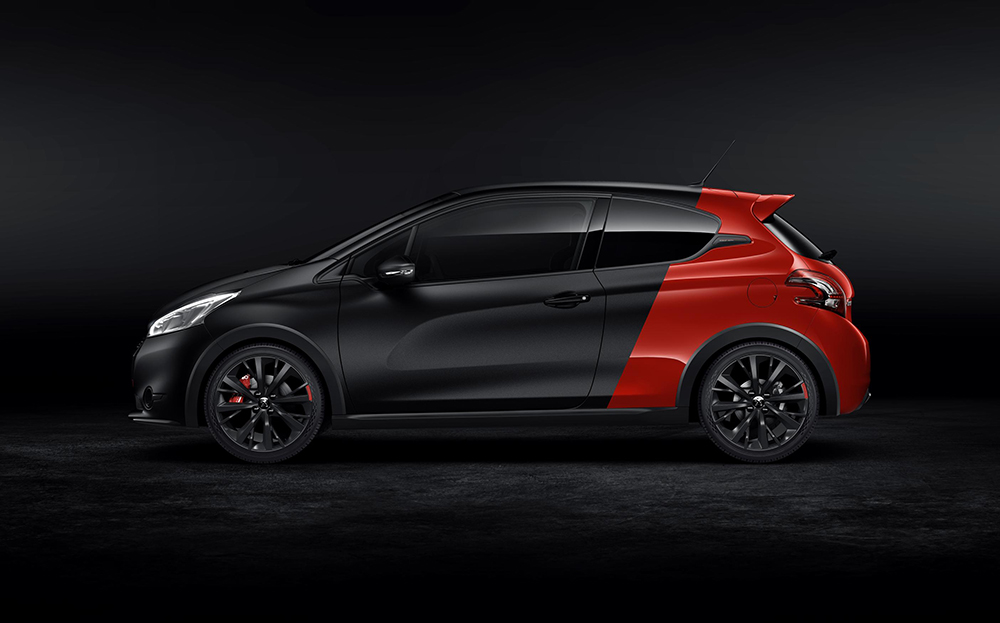 What Peugeot has produced however, is a terrifically fun modern hot hatch. Its turbocharged, tuned 1.6-litre engine has 205bhp and will send the car from 0-62mph in 6.5sec, a 0.3sec improvement on the standard GTi. It feels quick, thanks to plenty of torque at low revs. This allows you to easily pull away in third gear but, more importantly, gives you a kick of acceleration without having to change down, the exhaust barking in a 21st century noise regulation compliant manner.

But it’s in the corners where this car really comes alive thanks to a Torsen limited slip differential, which has been fitted between the front axles. This sends more force to one side of the car if the opposite wheel is spinning.

It feels as if the car has latched onto a lamp-post on the inside of the corner, helping it sail round while holding a tight line. Any owner will feel the benefit but true enthusiasts will be able to make rapid progress with the ability to throw the car into turns at high speed and hit the accelerator early, taking advantage of the plentiful grip.

That’s not to say that the car won’t let go. The additional grip has allowed Peugeot to limit the intervention of the traction control, so the car does allow some sliding. When tested on the track, with the traction control off, testers reported that the tail would step out if they lifted off the accelerator in the middle of a fast corner.

The 208 GTi 30th is stiff (more on this below) but also stable on bumpy British roads, resisting the attempts of all but the worst rutted carriageways, potholed tarmac and rippled road surfaces to nudge it off its line.

At lower speeds the steering can feel entirely detached from the front wheels, but it comes alive with weight and feel when you push the car harder, giving a good sense of when the tyres are running out of grip. It’s an involved drive and will have you setting your alarm early to take a detour onto your favourite B-Road before work. And then making you late because you’ll have turned around to drive the route again.

It’s an involved drive and will have you setting your alarm early to take a detour onto your favourite B-Road before work.

Happily, the interior, with alcantara and fairly realistic fake leather is kept simple. There are a minimal number of buttons on the steering wheel, a solid 6-speed manual gearbox and no sign of any buttons to adjust the suspension settings. It’s a car that’s all about the drive.

It runs the excellent Ford Fiesta ST pretty close. The Ford might be slightly more fun to drive and the top of the range version is still £2,600 cheaper, but the 208, in our experience, is quicker and has slightly more grip.

From a passenger’s perspective, though, it has some flaws and loses ground to the Ford. It didn’t take long to realise why Peugeot initially launched the car on the smooth tarmac of a racing circuit. The stiffened suspension, lowered by 10mm, may keep the car stable and beautifully flat through cornering, but the ride is so harsh that it’s advisable to stow all loose objects before setting off.

Passengers in the back, in particular are liable to go green with queasiness at the incessant jiggles and bumps. The comfortable bucket seats in the front make long motorway journeys bearable but never relaxing. 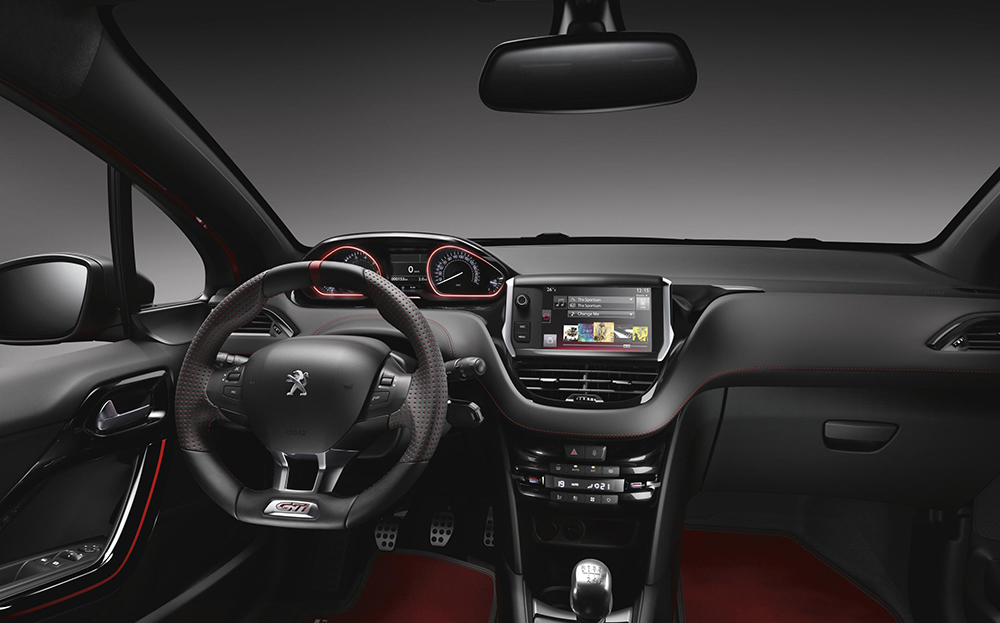 In fact, it’s a poor long-distance motorway machine. The stereo is tinny, the radio menu controls on the dashboard touchscreen appear to have been designed by someone without fingers and the 50-litre fuel tank means you’ll be pulling into plenty of petrol stations, despite impressive fuel economy of up to 40mpg during our test.

If you’re thinking that doesn’t matter – that you’d avoid motorways, take the B-roads and have a blast, then you and the 208 GTi 30th will get on just fine. It’s one of the best hot hatches that you can buy. Just as long as your friends don’t need a lift.

Browse the used Peugeot 208s for sale at driving.co.uk

Browse the Ford Fiestas for sale on driving.co.uk

Browse the Minis for sale on driving.co.uk