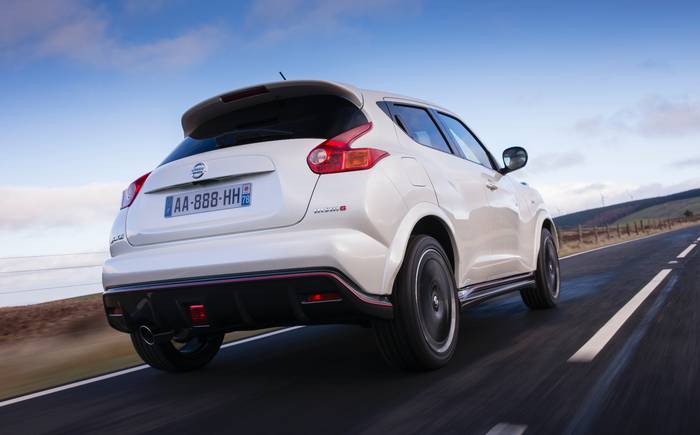 Unless you’re a Playstation gamer or a motorsports fan, the Nismo name may just have passed you by but the seeds of Nissan’s in-house tuner were planted as far back as 1964 when a few exuberant Nissan engineers stuffed a 2-litre V6 engine from a large luxury saloon under the bonnet of the much smaller Skyline, and sent it round a track.

The Skyline legend was born on that day but the Nismo (Nissan Motorsports International Co) tuning house wasn’t officially launched until 1984, since when it has been responsible for preparing the Japanese marque’s full-fat racing cars as well as producing a number of after-market sports packages for road cars in overseas markets.

Nismo found fame on our shores in 1997 via the Gran Turismo racing game but in its near 30-year history no wholly Nismo-built road car has been sold to UK customers. Until now. In fact, get ready for a whole wave of hot Nissans, starting with the car you’re looking at – the Nissan Juke Nismo.

Search for and buy a used Nissan Juke Nismo on driving.co.uk

The Juke may at first sound like an odd model to launch the Nismo badge in Europe. The small SUV is basically a baby Qashqai – a small car on stilts. It’s also a design that has divided audiences. The Juke is the closest you’ll get to marmite in the automotive world.

But those who like it, really like it. Its bulbous curves are the opposite of subtle; it’s a bold fashion statement. If you want to shout “look at me” without spending the big bucks, the Juke’s just the car.

But it’s more than that, having garnered a reputation for dynamic handling with a solid chassis and a nicely honed feel behind the wheel. In short, the standard Juke may be funny-looking but it’s also surprising fun on the road. 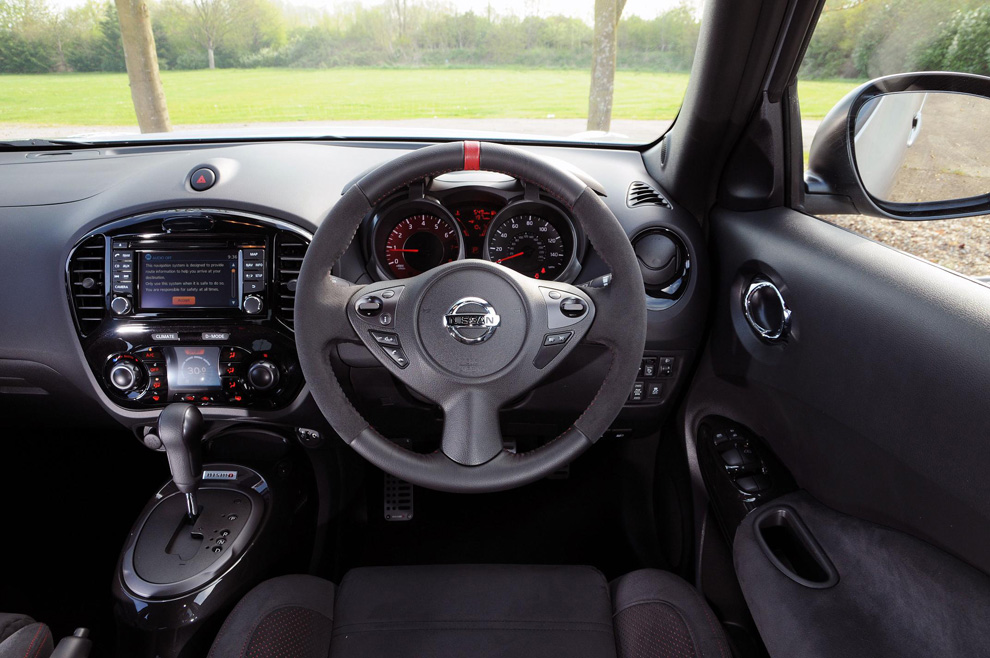 Which is where Nismo comes in. Nissan tells us that the Nismo brand is all about “innovation that excites” and with the Juke being the company’s boldest design statement yet, Nismodification doesn’t seem so strange. At the Barcelona launch, Nismo declared that it aims to be the “most accessible performance brand” on the market, bringing its own particular motorsports know-how to the masses.

And Juke is one of Nissan’s most popular models – 330,000 have been built since its launch in September 2010, with Nissan managing to shift 28,862 Jukes in Britain last year. That’s more sales than the Mini hatchback, Citroen DS3 or Ford Mondeo.

So what does the Nismo version offer over and above the standard Juke? More power, of course, but not wild amounts – don’t expect a fire-breathing monster. The Juke Nismo boosts power via remapping of the 1.6-litre turbo powertrain from 187hp to 197hp at 6,000rpm, while torque rises from 177lb ft to 184lb ft between 2,400 and 4,800rpm. The 0-62mph sprint takes 7.8 seconds and the top speed is 134mph. All this is achieved without increasing fuel consumption; Nissan claims the same 40.9mpg as the Juke DIG-T.

Mild tweaks, then, but Nismo says major power hikes would take the car beyond the reach of the average buyer. Nissan is asking £19,995 for the base Juke Nismo, pricing it between the Mini Cooper S and the Mini Countryman S, and plans to shift 1,000 units this year.

There’s also a clear focus on the complete package rather than out-and-out performance. The Juke Nismo strikes a keen balance between power and grip. The Nismo body kit looks slightly more aggressive but the aero changes serve a purpose other than styling: a 37% increase in downforce has been achieved without the addition of any extra drag.

Add wider 18in alloy wheels and 10% stiffer suspension for the 2WD manual model we drove, or 15% for the 4WD models with continually variable transmission, and the car steers and handles with aplomb. Rarely have we had so much fun blasting round mountain roads; Nismo seems to have nailed it. The sensation of speed is there without things ever becoming scary. Even on mildly icy and twisty roads in the early morning, the car didn’t put a foot wrong. 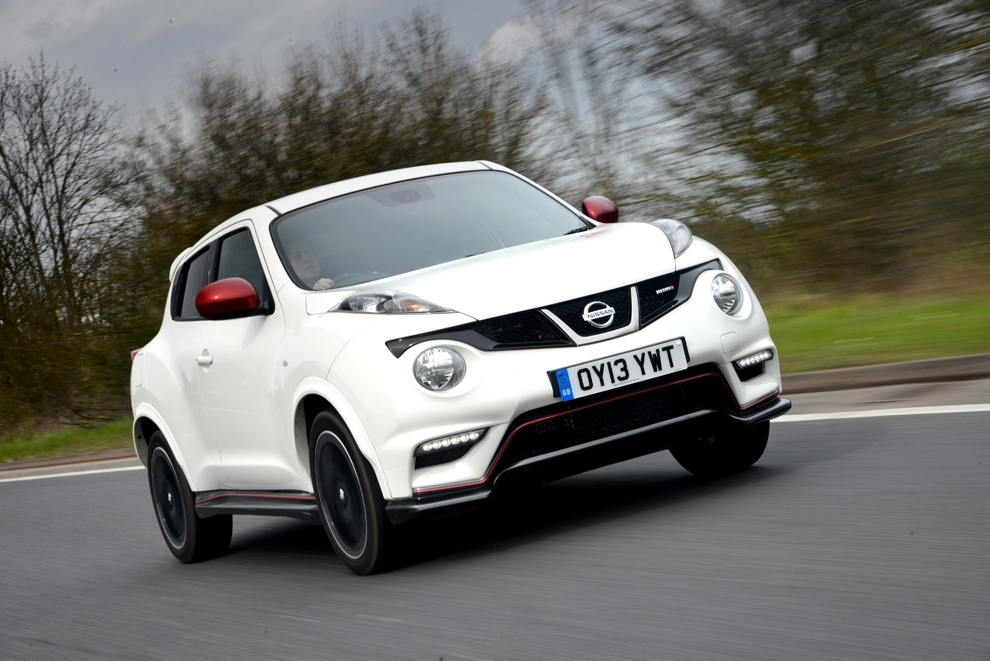 But the most impressive part of the driving experience has to be the steering. Grip the Alcantara-covered wheel (left) – the first time the material has been applied to the wheel of a Nissan road car, by the way – and you have the impression of sitting behind a proper track car. The modified Nismo steering rack provides excellent feedback. It’s as if you can feel every lump of grit in the asphalt, such is the feel it provides.

The interior is also highly specced with sportier trim, dual digital screens for touchscreen sat nav and climate control, and performance gauges (including a g-force meter).

The bad things? It seems the designer of the Nismo seats must be vertically challenged, or at least of average height. If you’re anywhere over about 6ft 2in tall, your back won’t thank you for choosing this car because the top of the backrest pushes into your shoulder blades. A more reclined seating position helps but is not ideal, obviously. It’s a shame, because for smaller folk it proved spot on, with decent support at the sides and good levels of comfort.

Other downsides?  The steering wheel is adjustable for rake (angle up and down) but not reach (distance from the driver), which is unusual and disappointing to find these days. And the noise from the engine is not the most rousing soundtrack you can hear; it’s more of a whine than a thrum, belying the rapid progress the car can make.

If this all sounds a little tame to you, you could wait until later in the year when a hotter Juke Nismo will go on sale. Power will be increased further still and other revisions are being made to make it even more focused. The prototype we tried also sounded a whole lot better. Before that, we’ll see a Nismo 370Z hit the roads, too [see News].

Don’t discount the first-ever Nismo model, though. The 2013 Juke Nismo is a fitting debut for Nissan’s highly regarded tuning house and for those who like the look of the Juke (marmite fans), this is the best expression of the model yet.