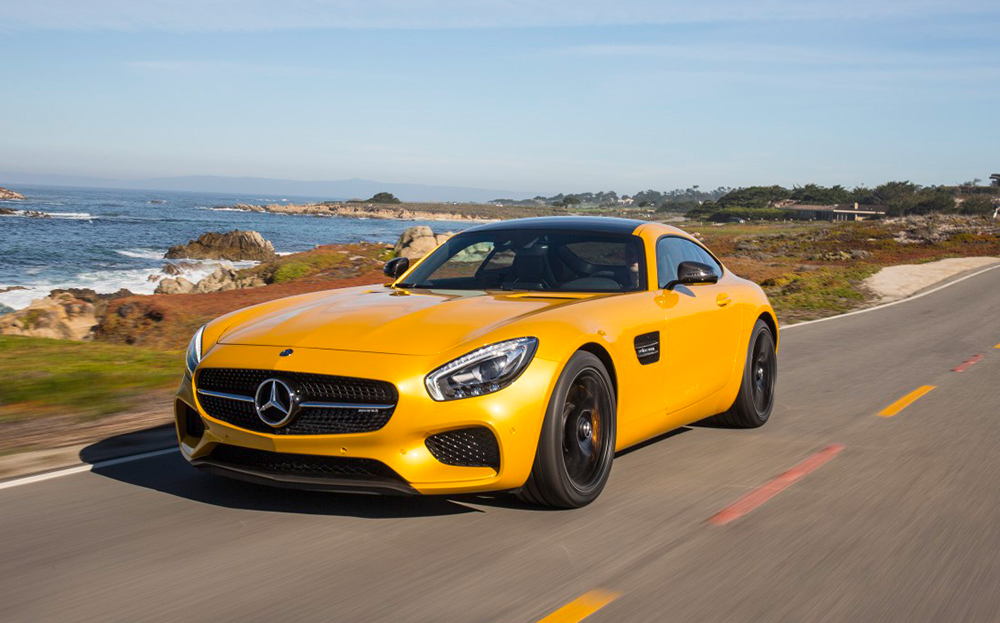 HAS THERE ever been a better time to have a midlife crisis? You can raid your pension pot and blow it on a sports car. And now that car doesn’t have to be a Porsche. Mercedes has come up with a rival to the 911, the sports car that for so long — together with ponytails and black polo necks — defined men of a certain age searching for their lost libido.

It’s significant because for more than half a century nothing has been able to knock the spots off the Porsche 911. The simple, zesty formula of flat-six engine in the rear, bags of power and no excess weight has seen off every challenger.

Browse the used Mercedes-Benz for sale on driving.co.uk

The new machine created by AMG, the high-performance division of Mercedes, is called the GT S (Gran Turismo Sport). Along with a slightly tamer version, the GT, it is designed to go head to head with the 911 in price and performance. You may think you’ve heard this kind of thing before, and it’s true that car enthusiasts’ magazines seem to thrive on “911-killer” headlines. But this time even Porsche seems rattled. Mercedes, one of the world’s biggest car companies — albeit a name more associated with luxury than speed — has made no secret of having its rival squarely in its sights.

A lavish unveiling at last month’s Paris motor show was followed by a marketing campaign with the tagline “Handcrafted by racers: a sports car in its purest form”. An unusual frostiness now exists between employees of Porsche and AMG, who work less than 20 miles apart, in Stuttgart and Affalterbach respectively.

Porsche even has a new GTS of its own, an updated variant of the 911, which was released the same day last week as the new Mercedes. Both launch events were in California — the biggest market for this type of car. Cue the grudge match of the decade.

Only something with the performance of the Bloodhound SSC rocket car could live up to that kind of build-up, so as one of the first journalists to drive the new “Porsche killer” I found the surprisingly conventional looks of the GT S something of a letdown. With its long bonnet, two seats in the middle and hunkered-down haunches, it closely resembles the now-discontinued Mercedes SLS AMG supercar.

The good news is that the GT S has an all-new 4-litre bi-turbo engine and an exhaust note that sounds like a powerboat tethered at a jetty. The car is categorised as front-engined but in fact the V8 unit sits just behind the front axle, with power directed to the rear wheels and the gearbox at the back for better weight distribution. 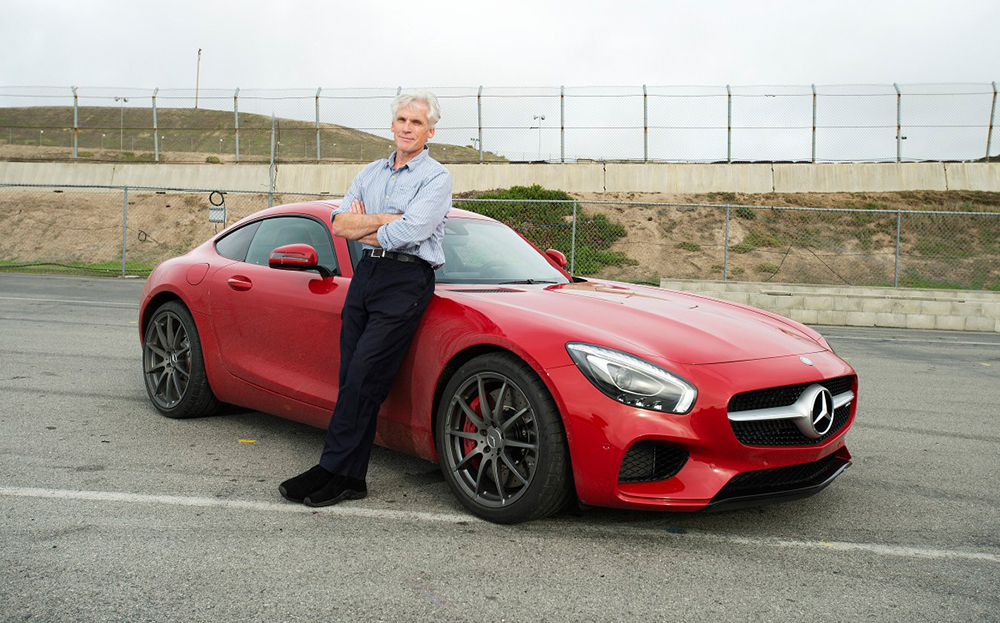 In corners it feels more of an athlete — the SLS was a brawler — with the engine, brakes and gearbox working smoothly in unison on the twistiest sections of road. When you’ve finished making the optional ceramic brakes think they’re back in the kiln, you can drive it as a true Gran Turismo should be driven. Slow down, switch the mode from Sport to Comfort — there are three settings, selected with a button on the central console, the third being Sport Plus — and it’s a supple drive.

After an hour behind the wheel, though, I ached to be able to stretch out my right foot from the cramped throttle position. The decision by the company’s designers to move the engine towards the rear may have improved balance and handling but it also seems to have eaten into the footwell. When I pointed this out to the maintenance crew they said my feet were too big.

After an hour behind the wheel, I ached to be able to stretch out my right foot from the cramped throttle position. The maintenance crew said my feet were too big.

Apart from that, it is comfortable enough, with supportive bucket seats and easy-to-reach switches arranged on a broad centre console, with two rows of buttons flanking the gear selector. There’s an 8.4in touchscreen borrowed from the new C-class for entertainment and climate functions. Seat heating, hazard lights and the extendable spoiler are controlled by buttons in the roof. The boot, accessible through a decent-sized tailgate, is 350 litres. How big is that? Enough for two sets of clubs, says Mercedes, though I struggled to fit a couple of flight cases in there.

Normally, when loaned a £110,495 car to test, you might treat it gently, but Mercedes had asked for no quarter to be given, so after pootling round downtown San Francisco and the surrounding roads I headed to the Laguna Seca racetrack in Monterey. The GT S’s engine — in effect the motors from two AMG A 45 hot hatches welded into a V8 — pushes it to 62mph in 3.8 seconds with no evidence of turbo lag. Maximum power delivery — 503bhp — is at 6250rpm, and it redlines at 7000rpm. And it felt fast on the perimeter road.

Like the Aston Martin Vantage and the Ferrari 458 Italia it has variable exhaust flaps that allow it to tiptoe through the traffic and then howl through the hills when you push hard on the throttle.

There’s no detectable understeer and even when you’re going flat-out at the grip limit there’s no fear that the car will suddenly bite back in the way that rear-engined cars are prone to. The GT S is two-tenths of a second quicker to 62mph than the cheaper GT (£97,195), but the GT may appeal to those who prefer their sports cars more understated.

It comes with 19in wheels at the rear instead of the overblown 20in ones at the back of the GT S and eschews the red brake callipers — a sort of hangover of the bankers’ red braces of the 1980s. With the money you save, you can pay for the ceramic brakes — a £6,000 option.

For marketing reasons, perhaps, Mercedes seems keen to distance the GT S from its predecessor, the SLS, saying it’s a completely different car. But that’s not quite true since it uses basically the same platform and many of the same components. If the SLS was a no-holds-barred driver’s car, the GT S is what you get when you rein it in for the more lucrative “mid-sized sports car” segment.

You could argue that accountants have triumphed over petrolheads, and that would be true, but you can hardly blame Mercedes. Porsche makes an estimated 50% gross profit from each 911 sold (compared with a car industry average of 10%-15%).

So is this the end of the 911? Nothing that has survived half a century will surrender that easily.

Having been at the launch of both cars, I’d say there’s also a good case for stating that the GT S is the car the SLS should have been all along — and nearly £50,000 cheaper than any version of the SLS. Mercedes has ditched the bad bits of the SLS — the thirsty 6.2-litre engine, the delightfully eccentric but heavy gullwing doors (the GT S is more than 50kg lighter than the SLS) — and kept the good bits. The hydraulically assisted power steering, for example, was developed for the SLS, and, unlike the electronically assisted steering on the latest-generation 911, gives much more of a feeling of being connected to the road. 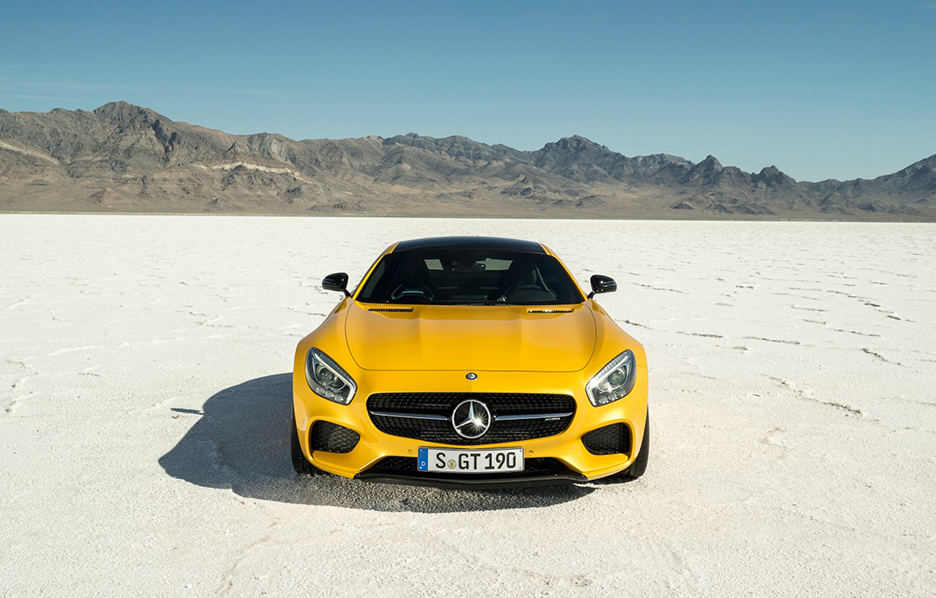 So is this the end of the 911? Nothing that has survived half a century will surrender that easily. At £120,598, the 911 Turbo may cost £10,000 or so more, but it’s four-tenths of a second quicker to 62mph and is all-wheel drive. Despite being nicknamed “the Widowmaker”, the Porsche is still the more planted car too.

But Mercedes has raised its game and the competition is closing in. For the same money as a 911 Turbo, or thereabouts, you now have the option not only of the Mercedes GT S but also the Jaguar F-type R, Nissan GT-R and Aston Martin V12 Vantage.

By the time you’ve finished test-driving that lot, McLaren’s new two-seater, the Sports Series, will be along, followed by Maserati’s Alfieri. There’s also a GT S convertible due, though Mercedes won’t confirm dates. That car promises to combine the coupé’s comfort and looks with the open-top allure of a long-distance cruiser.

So keep booking those test drives. They’re even cheaper than a polo neck.

Cash in your pension pot: There’s never been more choice of midlife-crisis cars 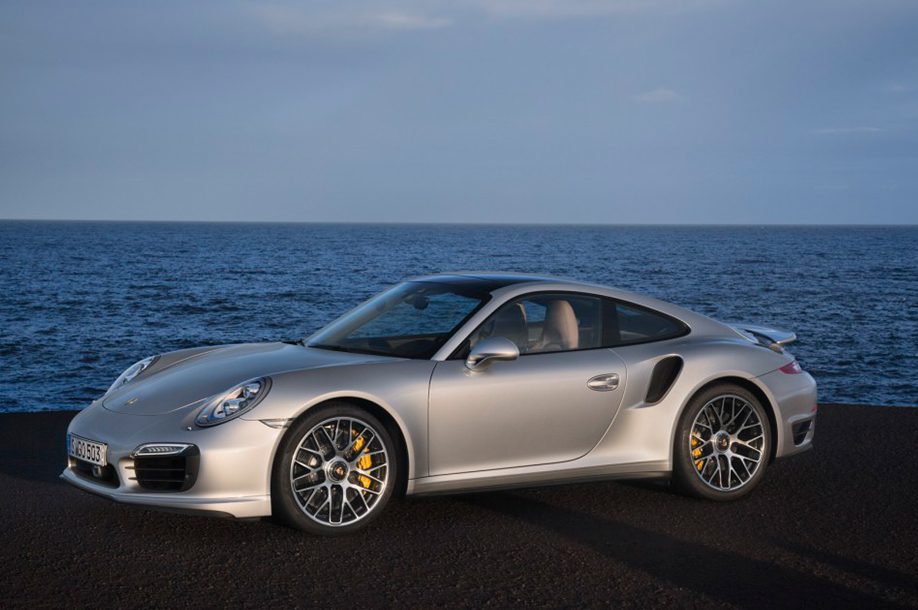 Once upon a time, the 911 Turbo had a nickname: “the Widowmaker”. These days it has been put on a short leash, with four-wheel drive and one of the best electronic stability systems going. The Turbo has matured into a sports car that’s as happy nipping to the shops as it is steaming around Silverstone in the rain.
Browse the used Porsche 911s for sale on driving.co.uk 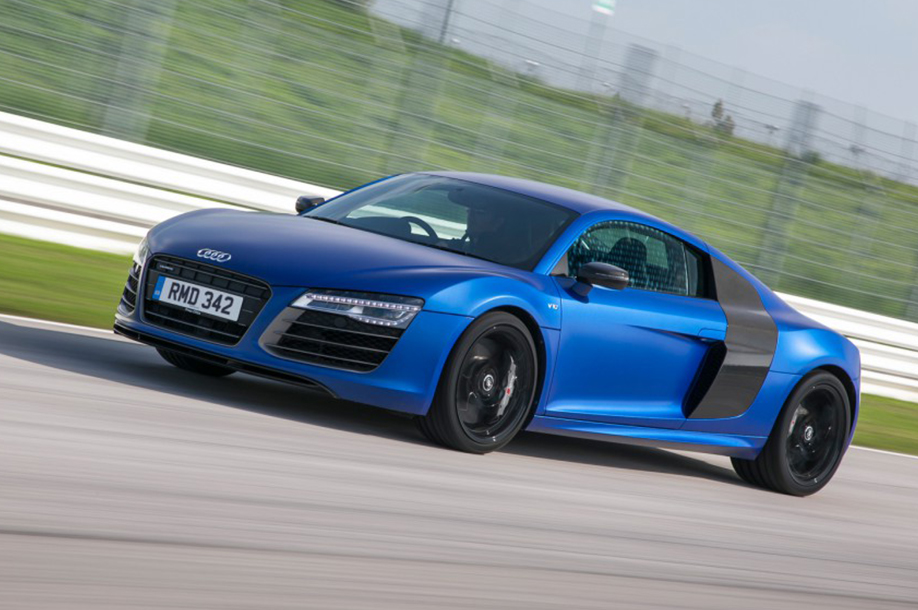 The R8 V10 might belch out CO2 like students at a party where the beer is on the house, but drivers who can put that to the back of their mind will find it is one of the most thrilling yet surefooted machines on the road. And despite bodywork that has been designed to turn heads as much as to keep the car stable at close to 200mph, an R8 is surprisingly easy to live with.
Browse the used Audi R8s for sale on driving.co.uk 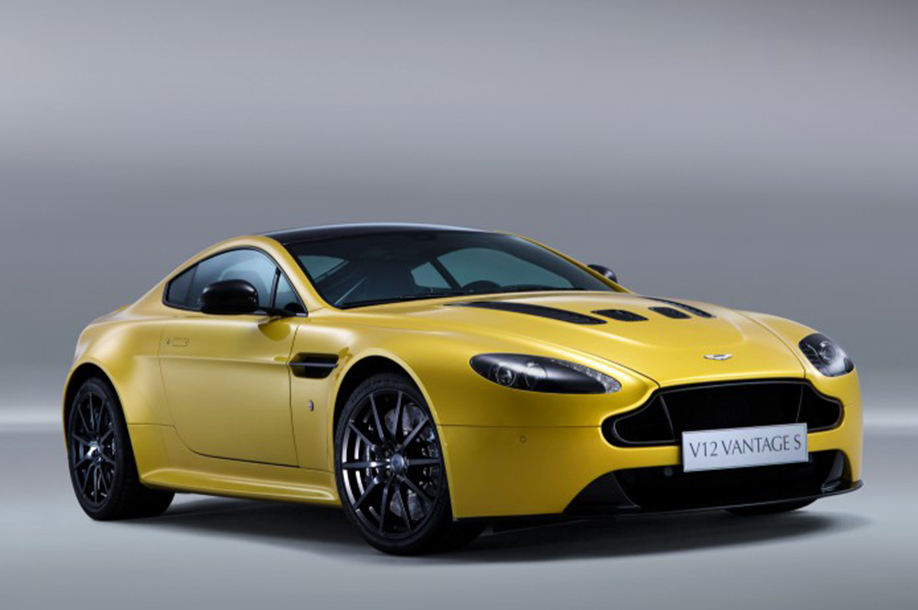 The Vantage dates back to 2005, making it just about pensionable in the world of sports cars, but this has given the engineers at Aston Martin plenty of time to perfect the model — greatly to the driver’s advantage. As poised as it is powerful, this is one of the most beautiful sports cars on sale.
Browse the used Aston Martin Vantages for sale on driving.co.uk 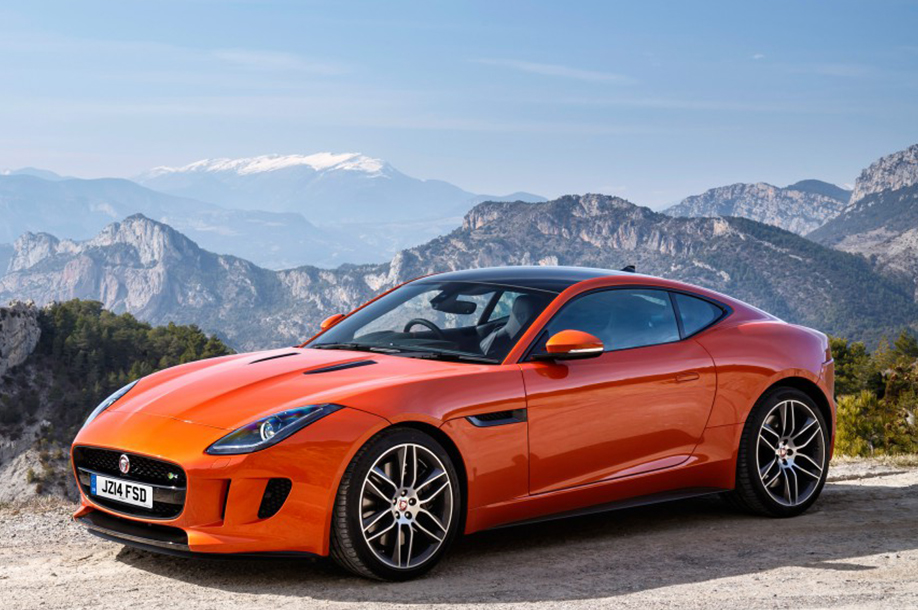 The first time you floor the throttle and give the V8 engine its head, you realise that this is the antidote to ruthlessly efficient German machines: growling, angry and a handful on road or race track. A four-wheel-drive version goes on sale next year. It is to be hoped it won’t entirely tame Jaguar’s wildcat.
Browse the used Jaguar F-types for sale on driving.co.uk 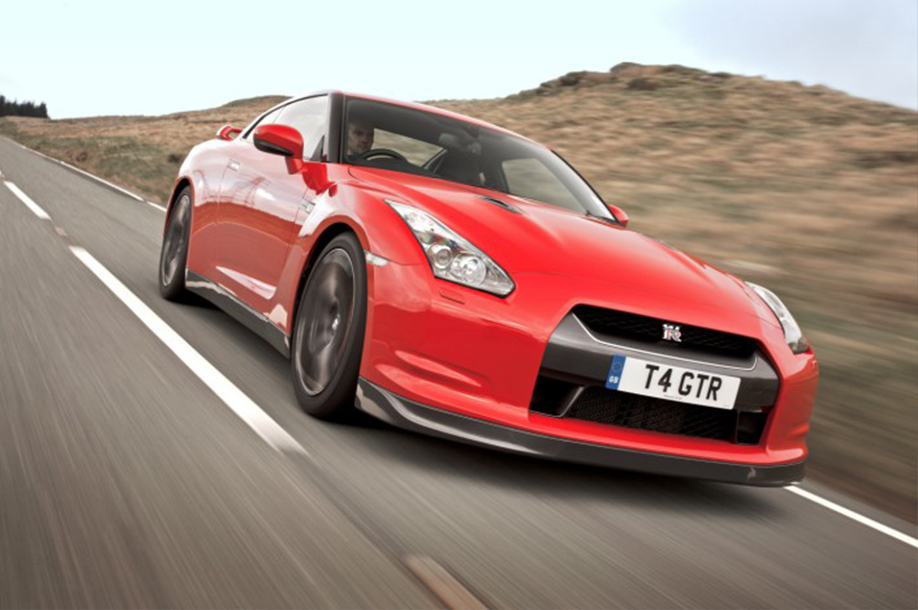 True, the GT-R is a bit of a thug compared to the others, but for raw performance it’s hard to beat. The fact that the GT-R can carry four adults comfortably, has a boot that will hold more than a washbag and costs £40,000 less than the 911 Turbo makes it all the more astonishing.
Browse the used Nissan GT-Rs for sale on driving.co.uk