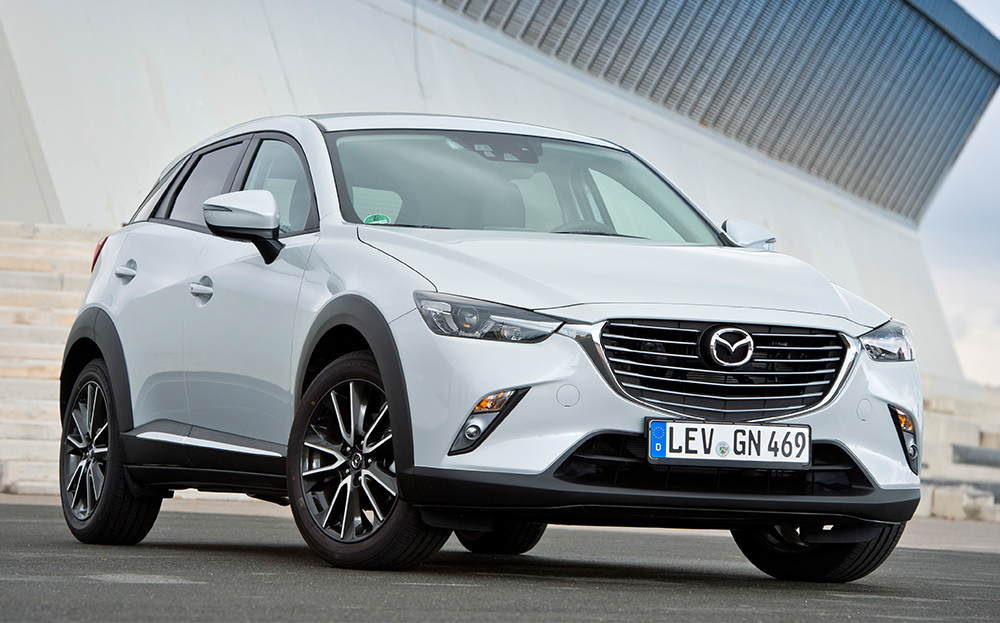 NO DOUBT about it: Mazda’s on a bit of a roll. Its recently launched MX-5 roadster and CX-5 crossover have met with near-universal acclaim and the company is heading for a bumper year. It’s a long way from the dark days when Ford, then its technology partner and major shareholder, withdrew and left Mazda to its own devices. Back then, in 2007, the very survival of the company was in question.

So this is a bit of a comeback-kid story. Eight years later the company has a strong line-up of crossover, saloon, estate, roadster and hatchback models with a range of engines designed and engineered in house. And now it is launching its next contender for success, the CX-3, a compact SUV along the lines of the Nissan Juke.

Pursuing buyers of this type of car makes a lot of sense. The market for small SUVs such as the Skoda Yeti, Nissan Juke, Renault Captur and Vauxhall Mokka grew by 56% in 2014. Mazda has never made such a vehicle.

It’s starting on solid foundations – the CX-3 is based on the excellent new Mazda2 hatchback. To meet the needs of a young family, the wheelbase has been stretched by 90mm. The bodywork is not outlandish like that of the Juke, but is still striking. It has the family look that Mazda calls Kodo, which may sound like a large reptile is actually Mazda’s “soul of motion” design theme. Sweeping lines create a distinct Mazda profile and a lively stance. 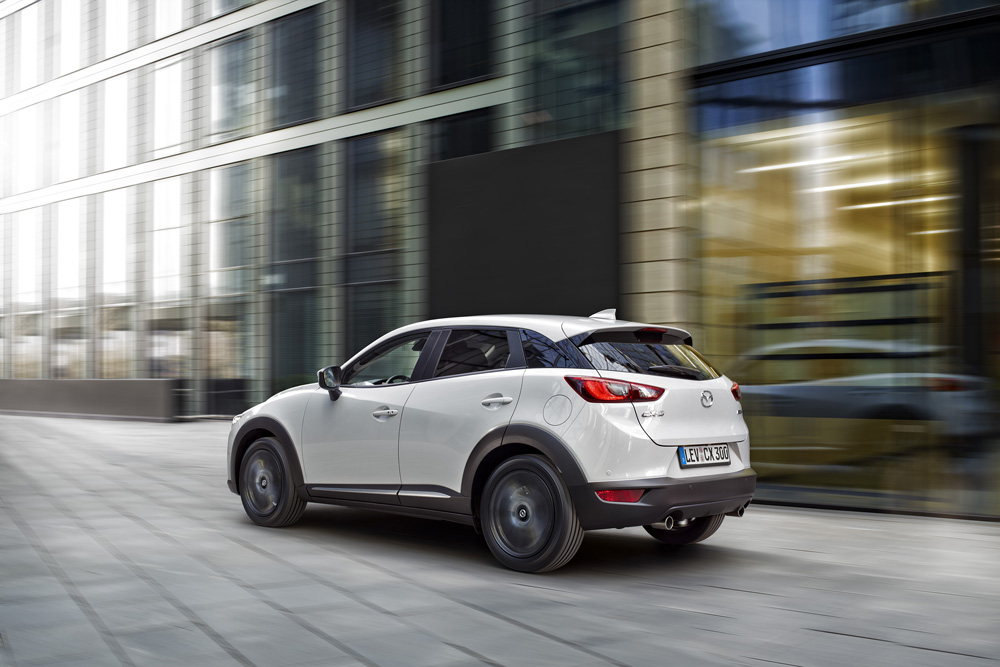 While Kodo styling works a bit better on Mazda’s longer, lower saloons and estates, there’s no question that the CX-3, which sits a couple of inches higher than its Mazda2 little brother, has a fresh and engaging look.

The nose is particularly striking, the most aggressive schnozz in the Mazda family. There’s little overhang and the front is just about vertical in profile – a good look

The nose is particularly striking, the most aggressive schnozz in the Mazda family. There’s very little overhang at the front and it’s just about vertical in profile, which is a good look.  Mazda describes the headlights as “predatory” (there’s that reptile again). The CX-3 looks terrific in white – with blacked-out C-pillars, it looks as though the roof is floating above the body, à la Evoque. 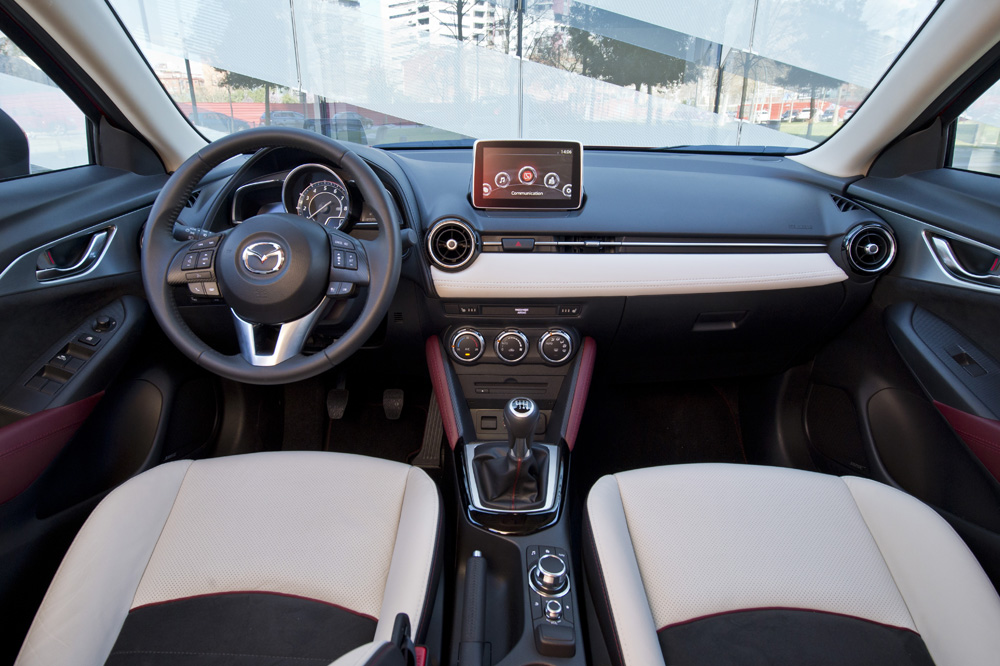 The CX-3 also shares its interior with the Mazda2, albeit with some extra touches such as body-coloured inserts in the air vents. The dash is dominated by a 7in colour screen that looks after the infotainment and smartphone connectivity (giving you social media, internet radio, the lot).

It’s easy for the driver to get comfortable in here, with a height-adjustable seat and steering wheel movable for reach and rake. They’ll probably like the optional head-up display, too, which presents information – speed, directions, cruise control status and safety warnings – on the windscreen in front of the driver. Mazda says it’s the first to offer this tech on such a car.

In the back, although there’s plenty of headroom, anyone behind a 6ft driver will find legroom a bit tight. It feels gloomy and claustrophobic back there, mainly because the rear windows are quite shallow. The privacy glass – standard in higher trims – doesn’t help matters.

On the practicality side, the rear seats fold to create a big load space. With seats up, the boot is on the small side at 350 litres. 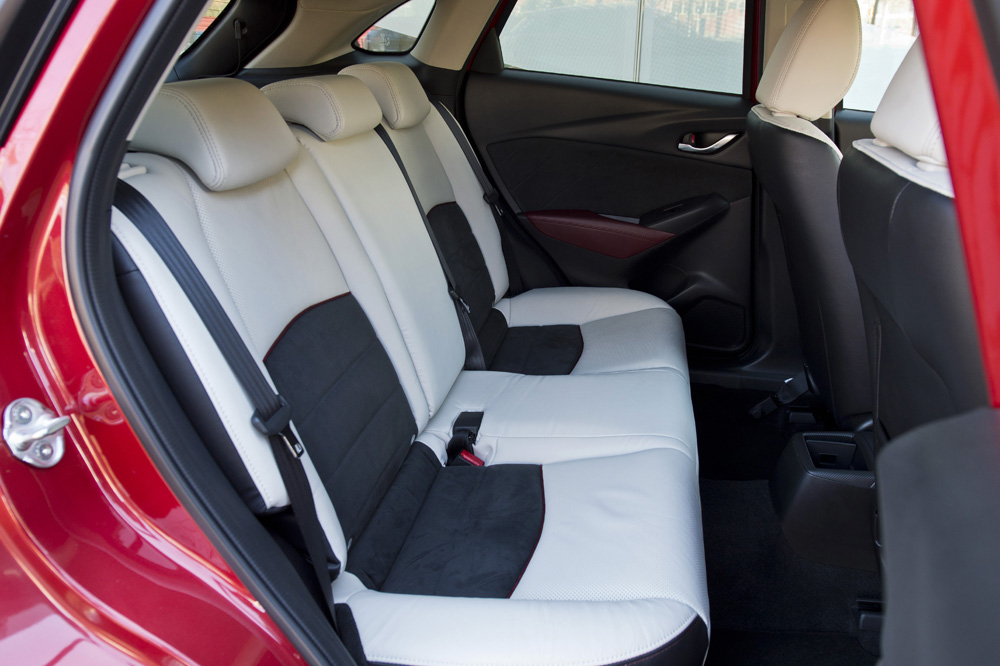 When it goes on sale here in June there will be an optional all-wheel-drive variant, but the take-up on that will be minuscule, according to the company; this is a car for the school run, not a cross-country run. Mum or dad will be able to choose between a 104bhp 1.5-litre diesel engine and a 2-litre petrol with either 118bhp or 148bhp. Mazda expects the split to be about 50:50 between diesel and petrol, with the 118bhp the more popular petrol.

The Mazda2 has excellent ride and handling, so expectations for the CX-3 are high. The performance on offer from the 2-litre petrol is perfectly adequate, and with the transmission in Sport mode the CX-3 is reasonably swift through twisting B-roads.

The handling isn’t as sharp as that of the Mazda2, which is understandable given the extra weight and higher centre of gravity. The CX-3 does, though, corner with stability and tends safely towards understeer if you misjudge a bend. It’s a good drive.

The ride is a fine compromise, too – firm, quiet but never crashy over broken surfaces. There is, though, noticeable wind noise at a 70mph cruise. Could it be the large wing mirrors? 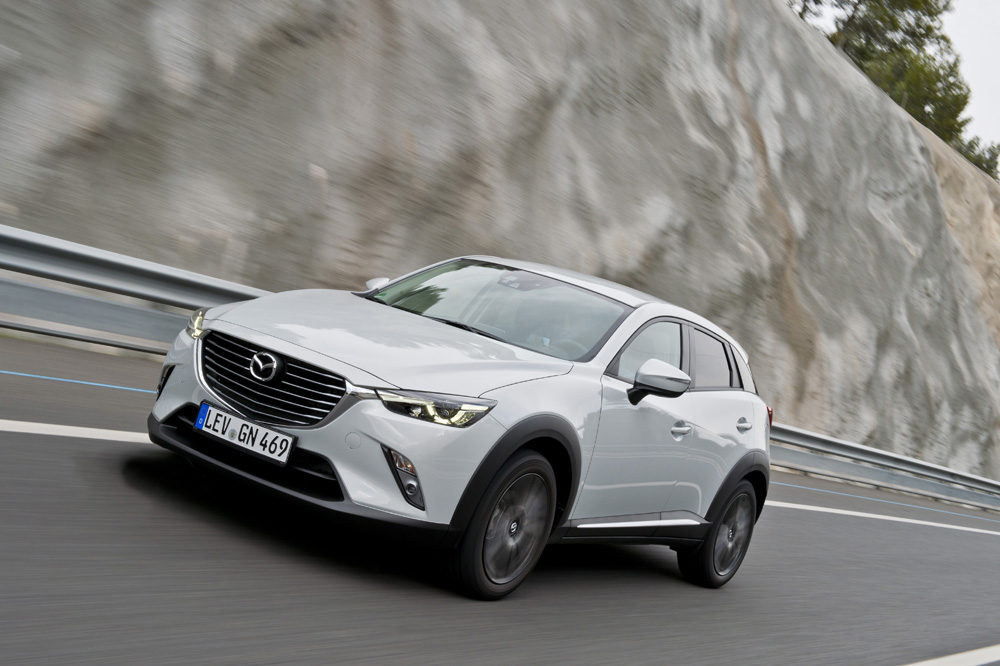 We also tried the 1.5-litre turbodiesel, which uses its 199 lb ft of torque to good effect. It’s quite punchy but a little vocal when exploiting holes in urban traffic, and the manual six-speed gearbox is a joy. But as in the petrol sibling, the steering feels a bit light.

As a newcomer to the mini SUV market, Mazda is being cautious about sales predictions, suggesting in the region of 5,500 CX-3s a year. On the strength of this first acquaintance I reckon it’s aiming way too low.