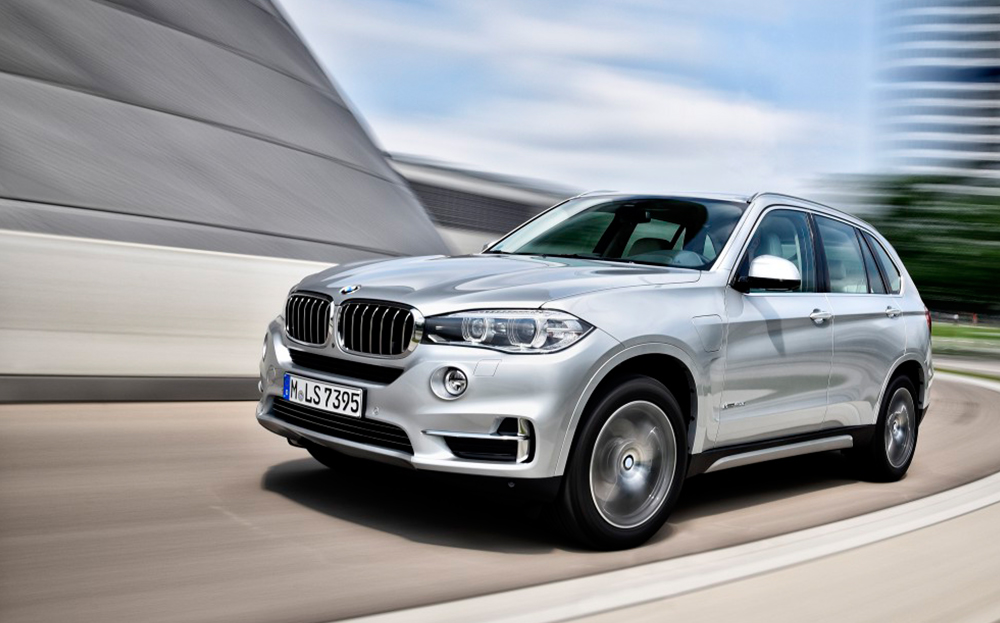 BMW’S X5 was one of the pioneers of family friendly off-roaders. Tall, spacious and bristling with gadgets, it’s a familiar sight the world over, from Austrian ski resorts to American freeways and outside school gates in the home counties.

Browse the used BMW X5s for sale on driving.co.uk

The one in the picture may look like its predecessors but it is different. At 70mph there is no sound to be heard other than a gentle rustle of wind and the remote hiss of tyres on asphalt. It is, frankly, amazing. The quiet is so enveloping that the voices of passengers drop to a hushed murmur.

This is the new BMW X5 xDrive40e plug-in hybrid — no noise, no vibration and no petrol being guzzled, even hustling us down the motorway at the legal limit.

Plug-in hybrids, in case you hadn’t noticed, are all the rage. Audi, Mitsubishi, Porsche and Volvo are using the tech to help sell SUVs. And BMW — which already has several in its range, including the desirable i8 sports car — is harnessing the technology to help ease the conscience, and tax bill, of drivers.

In this case the system teams up a 2-litre turbocharged four-cylinder petrol engine with a synchronous electric motor for a combined power output of 308bhp. The key here is that this X5 features a large lithium-ion battery pack that can deliver a pure electric range of up to 19 miles. Top speed on battery alone is 75mph, although you will seriously reduce the range at that pace. 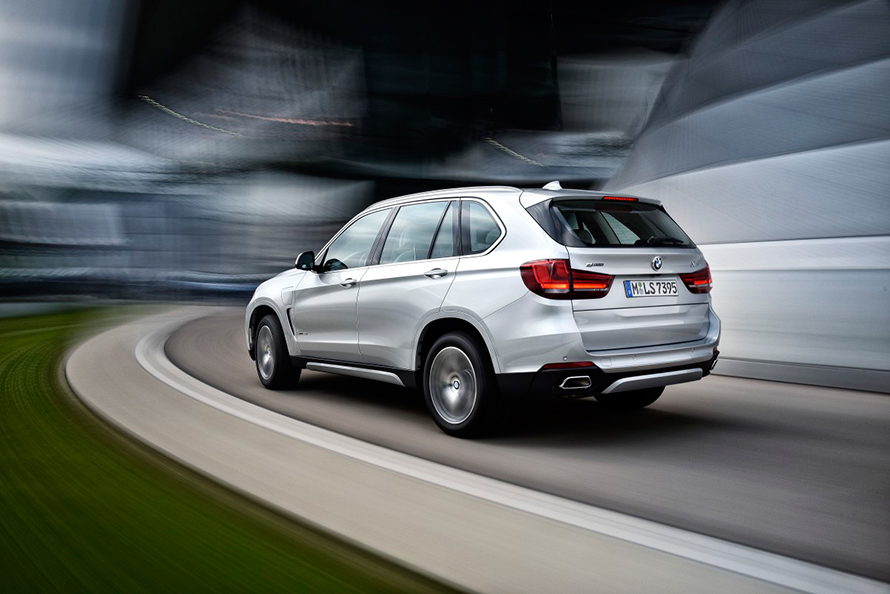 The X5 has three primary hybrid modes. Get in and start off without selecting anything, as you would in an ordinary X5, and the system will default to Auto eDrive. In this setting it behaves like any old hybrid, using a combination of electric and petrol motivation depending on what you’re doing with your right foot. Mash the throttle pedal to the floor and you’ll get every ounce of power the petrol engine and electric motor can muster, but if you’re pootling around town, the system will give you silent, pure-electric motoring.

So this is the mode for people who don’t want to think about modes; just let the car sort everything out. What you end up with is a fantastically refined SUV — the transition from pure electric running to petrol and electric is seamless. Often the only way to tell that the engine has joined proceedings is to keep an eye on the rev counter, which leaps into life when the car reckons you need a bit of poke.

You really have to charge it as much as possible, because if you run around on zero battery you’ve just got a needlessly heavy SUV that’ll get a fraction of the fuel mileage an equivalent diesel will

And it does have a decent turn of performance when you want it; for such a large car, 0-62mph in just 6.8 seconds is good going, by any measure. Power is fed through a smooth-shifting eight-speed automatic transmission, and this X5 has permanent four-wheel drive.

If you select Max eDrive the X5 plug-in operates in pure electric mode; it will engage the petrol engine only if you suddenly find you need maximum beans. Around town it works really well — exploiting gaps in traffic is quite good fun as the torque of the electric motor is all there instantly.

The third setting, Save Battery, is self-explanatory; if you’re on a motorway and expect to be driving in a city centre where you might want pure electric motoring, this mode will maintain or even top up a minimum level of charge, which will give you a reasonable range of urban miles under electric power. It’s a handy feature, but the X5 is inefficient in that mode, especially if the engine is acting as a generator to top up the battery at the same time it is powering the car. You’ll feel more sinner than saint using it.

The X5’s cabin is still a good place to spend time, with comfortable seats and masses of space in the back. But if you need seven seats, it’ll have to be a non-hybrid X5, as the rear-mounted battery pack means a third row of chairs can’t be fitted. There is also restricted luggage space — 150 litres less with the rear seats down — although subjectively, the boot still looks quite capacious. 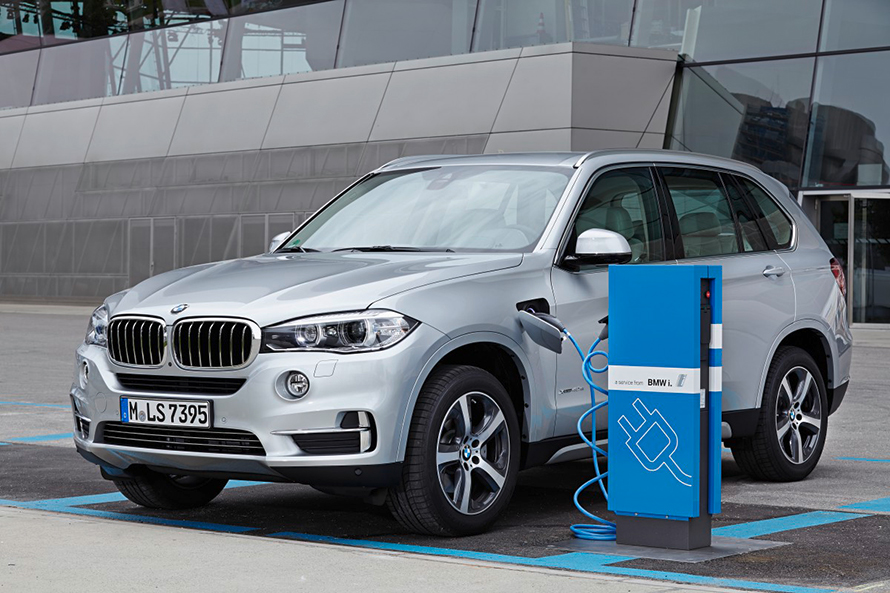 The plug-in X5 is heavier than its diesel equivalent, but because all the extra weight is low the car doesn’t feel unwieldy. You can hurry along a B-road, using its torque to slingshot out of corners, but ultimately, you’ll get early understeer if you’re caning it. And why would you want to do that in a big SUV?

As well as a choice of hybrid power modes, the plug-in X5 gets different driving settings, in common with other models in the range, that adjust throttle response, steering weight and gearshift speed. And while the steering is a little light, it’s perfectly suited in this application; the combination of easy torque response, refined transmission and quiet, smooth running makes the plug-in X5 a relaxing driving experience.

There’s something strangely satisfying about running this car on electric. Not in a polar bear-saving, Swampy kind of way; it’s just a brilliantly relaxing, smooth and quiet way of getting around

It would be a good commuter car for those with a journey combining motorways and city centres. And low CO2 emissions bring the usual tax breaks, although at 77g/km it just misses out on the London congestion charge limit of 75g/km. So close, but no cigar.

There is, though, an obvious drawback to owning a plug-in hybrid. You really have to charge it as much as possible, because if you run around on zero battery you’ve just got a needlessly heavy SUV that’ll get a fraction of the fuel mileage an equivalent diesel will. For the record, the claimed combined fuel consumption for this plug-in SUV is 85.6mpg. 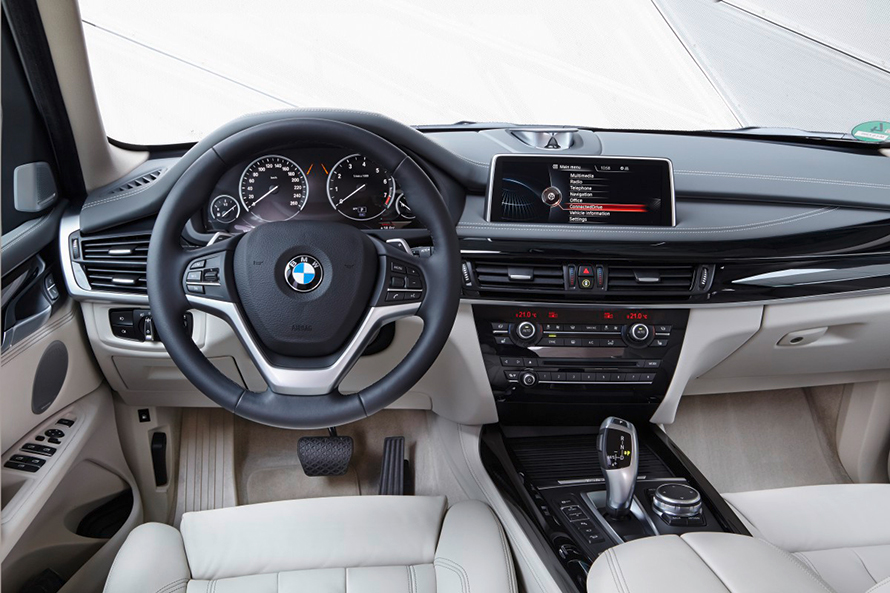 There are more public charging points, that’s true — and some of them even function — but for most, it’ll be charging at home or at work that’ll be the most sensible routine. That all sounds a hassle, but bear in mind that you can fully charge the X5’s battery on a domestic socket in just under four hours.

I made my last run to Munich airport — about 20 miles — mainly on electric power. And there’s something strangely satisfying about doing that. Not in a polar bear-saving, Swampy kind of way; it’s just a brilliantly relaxing, smooth and quiet way of getting around, in a car that’s as far removed from the ridiculous Reva G-Wiz as possible.

Then, on the last stretch of A-road, I gave it maximum right foot for a glorious surge of acceleration, which was hugely amusing. Forgive me, Father, for I have sinned.

Browse the used BMW X5s for sale on driving.co.uk