IF YOU were attempting to mastermind the perfect launch to demonstrate the latest Italian thoroughbred supercar, the list of things required is straightforward.

A beautiful location, naturally. Ideally one where the sun shines all year and the local police turn a blind eye to the projectile that’s just passed by with such force, it blew the lights clean off their panda car’s roof.

And empty, heaven-sent roads. Britain wouldn’t do, because the moment the locals heard the howls of a V12 engine, they’d be on the phone to the police, council and Jeremy Vine. And frankly, if the roads aren’t chock full of Sunday drivers and caravans, there’ll be an Amazon delivery van parked precariously around every bend.

What you need is somewhere like Spain. Where the roads are shiny and new, paid for by us, the mountain views are the stuff Instagram is made of, and you can stop off at a racetrack along your way.

Lamborghini came to the same conclusion, and chose the Ricardo Tormo race track in Valencia to let journalists loose in the new, 2017 Aventador, which brings back the famed ‘S’ badge that has graced pin-ups like the Miura and Countach.

Unfortunately, at precisely the moment the press touched down, a storm straight out of Hollywood brought trees crashing down and had the city cowering indoors.

These were not perfect conditions to drive a 730bhp, naturally aspirated V12 supercar that can now send up to 90 per cent of its power to the back wheels.

How would anyone experience the kick of the more potent engine, the agility of the new four-wheel steering system or the pleasure of tailoring the myriad options of the latest driving mode – called ‘Ego’ – if they would be better off chartering a boat?

For half a day, Stefano Domenicali, Lamborghini’s chief executive officer, and his trusted band of acolytes stood around, anxiously peering out of windows to see if there was a break in the weather. They needn’t have bothered; the rain was pouring in through the roof and seeping under doors.

Could journalists be entrusted with the most extreme, expensive Lamborghini on sale in the most treacherous driving conditions anyone had experienced at the launch of a new car?

Standing water covered most of the Ricardo Tormo race track. The Pirelli P Zero tyres appeared to have no more tread than a band of liquorice. And at one point, I could have sworn I saw the concrete crash barriers lick their lips…

Frankly, a week’s stay at a Brazilian prison seemed more appealing. Then the order came from up high: let them drive.

Lifting open the door to a supercar like the Aventador will always quicken the pulse rate. But in such punishing conditions, it’s enough to stop your heart.

All four tyres broke traction and the Aventador S shimmied like a bull stamping its feet. And that was on the straight.

So off we went, following a racing driver in another Aventador. Their car created a wall of spray, a bit like an onboard camera view from a wet Formula One race. I say ‘a bit’, because it was much worse than that.

Gradually, the spray subsided. Not because it stopped raining, but because the racing driver did what he is programmed to do: go as fast as is physically possible until someone at the other end of a radio issues the command to pull into the pit lane.

Within not much time at all, the Aventador delivered the first of many slaps around the face. In third gear, with the throttle pushed to the floor, all four tyres broke traction and the Aventador S shimmied like a bull stamping its feet. And that was on the straight.

The new dynamic steering system requires just the faintest hint of a turn to have the nose of the car diving for the apex of each corner. Lamborghini is so proud of the speedy response of this system that it let journalists compare it back-to-back with the outgoing Aventador, and sure enough, the response was more akin to a petite Lotus Elise than a giant supercar. 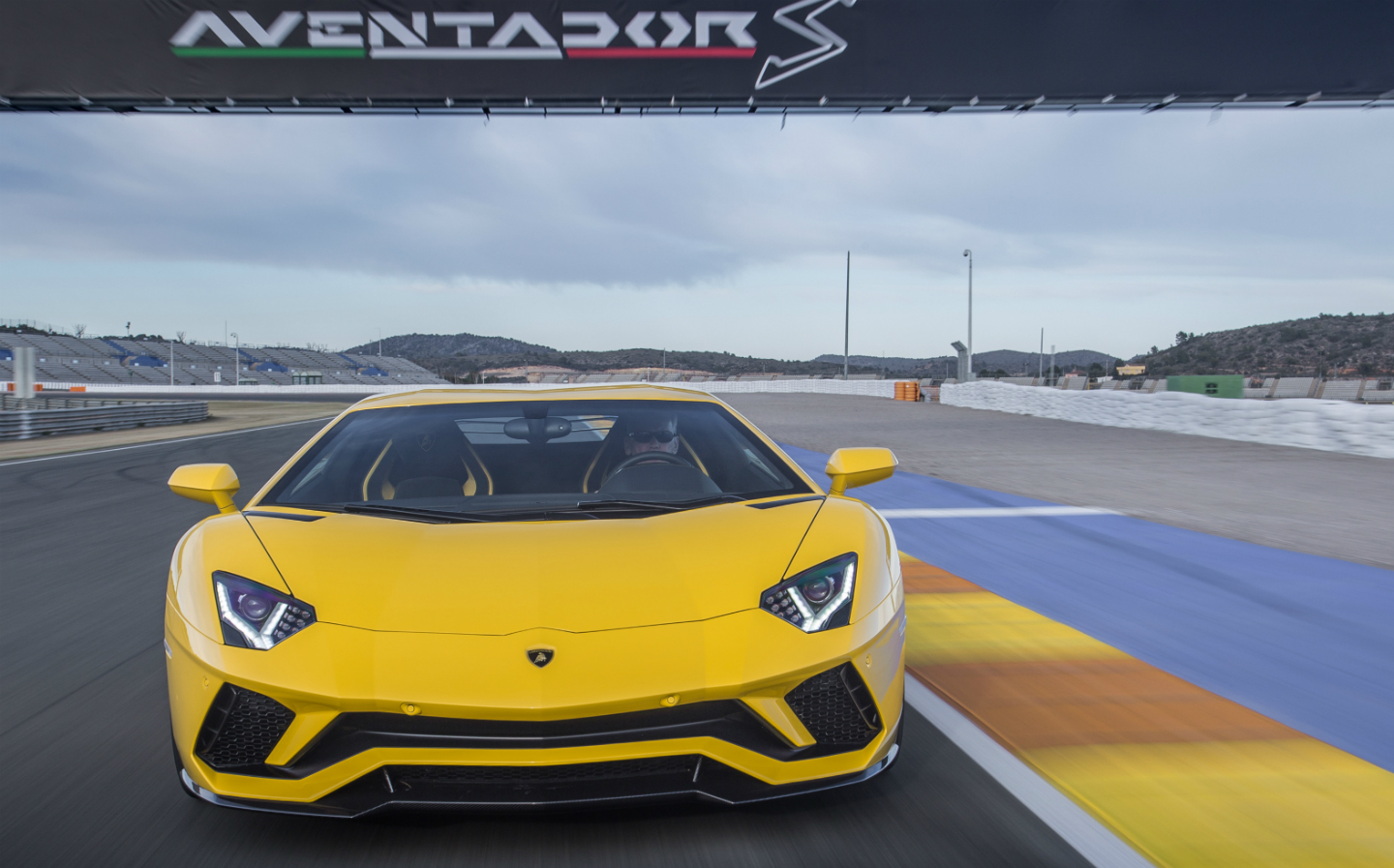 It’s helped by a new rear-wheel steering system. This isn’t new technology; Honda, for example, used it for its Prelude coupé in the 1980s. But it’s in vogue with engineers who want to use every trick in the book to make big brutes like the Aventador behave more like a ballerina than a boxer.

But there’s a problem with all this not-so-new-fangled technology. Because it’s so alert, it’s important that the driver operates it with the delicacy of a bomb disposal expert.

Fail to do so and the car dives for the apex of a corner like a Labrador lunging for a dropped sausage. This would be fine, except if you arrive at a corner too quickly and turn aggressively, the front tyres run out of grip, so you’ll instinctively ease off the throttle, which pitches the car into a pirouette.

This can be used to your advantage, especially given the 43/57 weight distribution. Time it right, and it’s possible to deliberately set it into a drift and – notably in Sport driving mode, which now sends up to 90 per cent of power to the back wheels – get back on the gas to hold a nice slide out of the bend.

It makes the new Lamborghini Aventador S a more involved, rewarding driving experience than the last version. And leaves the driver surprised at just how agile this hulk of a car feels.

There’s a new driving mode, called Ego, which finally allows for fine tuning of the responses of the chassis, gearbox and engine. Some might argue, however, that a Lamborghini driver is in ‘ego’ mode whenever they slide behind the wheel.

The brake pedal feels a little soft underfoot, but the brakes are smooth and there’s no questioning the ultimate stopping power of the standard carbon ceramic discs.

But the single clutch automatic gearbox is showing its age. The shifts in Corsa mode are so brutal they upset the car’s poise on a wet track. And in everyday Strada setting, it’s too ponderous and the gearbox and throttle have an embarrassing habit of shunting as the driver eases off the accelerator or pulls to a stop, making the Aventador S lurch as though a learner driver’s at the wheel.

Still, it’s possible to forgive it almost anything once you’ve experienced the 6.5-litre V12. 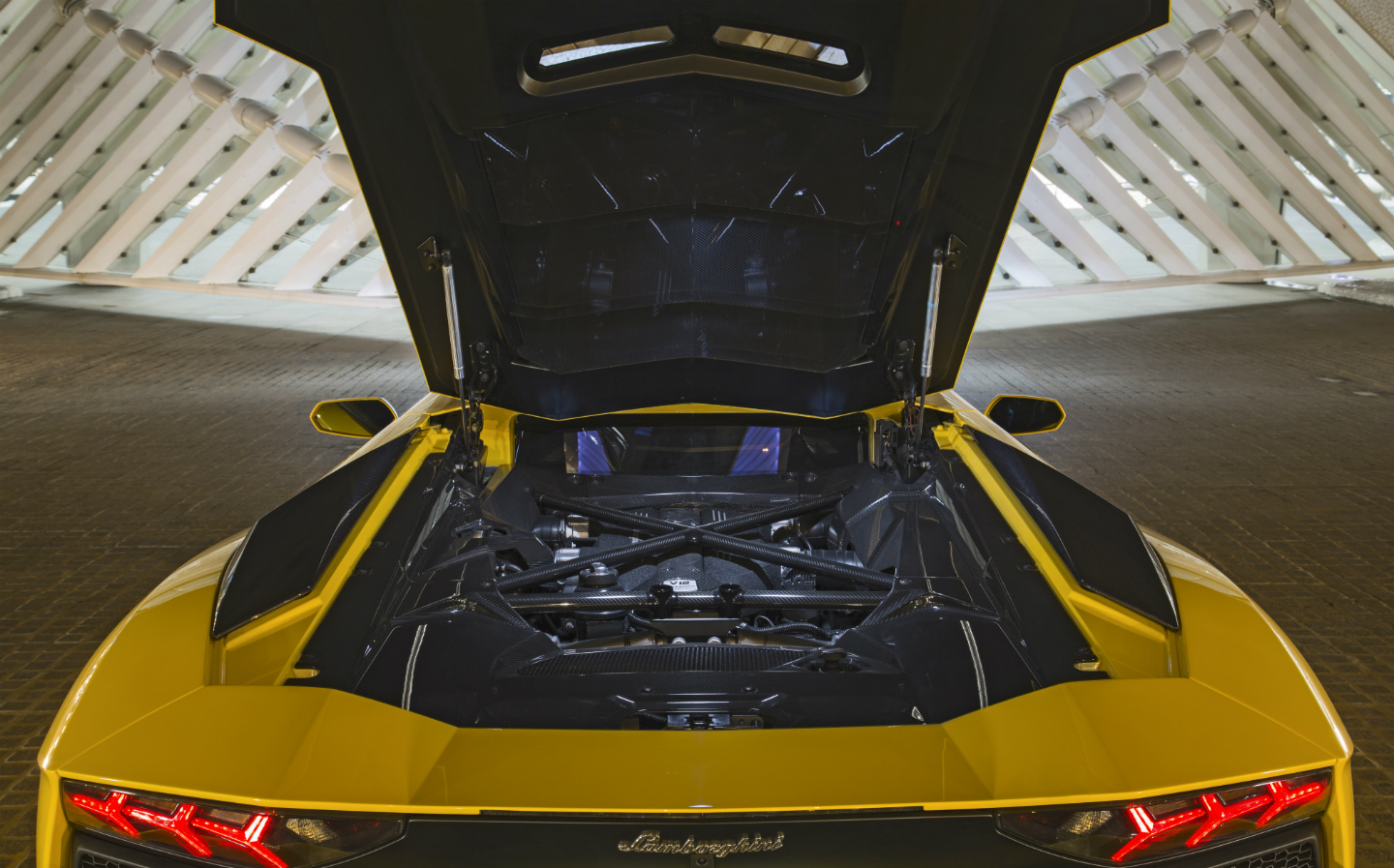 As rival supercar makers turn to turbocharging and hybrid power, Lamborghini’s naturally aspirated V12 engine is as authentic as an open fire in a world of flame-effect lights.

Its bellow is a reminder that Formula One cars have been castrated. From 2,500rpm it sounds good; after 5,000rpm it makes the driver’s hair stand on end. And as it roars toward the 8500rpm rev limit, you find yourself laughing like a man possessed.

And by Jove, the Aventador S is fast. It can make your eyes water, stomach turn giddy and bowels clench with just the slightest prod of the throttle.

Lamborghini says it can accelerate from 0-62mph in 2.9 seconds and the top speed is 217mph (no faster than the outgoing model) but it’s the fact it can launch from a standstill to 124mph in just 8.8 seconds that is truly jaw dropping.

There are other changes to the car which are harder to detect. The successful redesign of the bodywork improves downforce at speed, and an active rear spoiler can reduce drag.

However, there’s no need for the irritating, flashing LED on the new digital instrument display, which blinks away whenever the spoiler changes position. You find yourself piling into a turn, and looking at the flashing warning light rather than concentrating on getting around the corner without crashing.

And the cabin is on the snug side, while there’s no dual-zone function for the climate control – which you get on a Kia Cee’d.

Still, who cares? The Aventador S is a great improvement over the model it succeeds. In fact, it’s a great supercar, period.

The V12 supercar is a dying breed, but the Aventador S is one of the greatest of all time. Catch it if you can before these dinosaurs of the road become extinct.