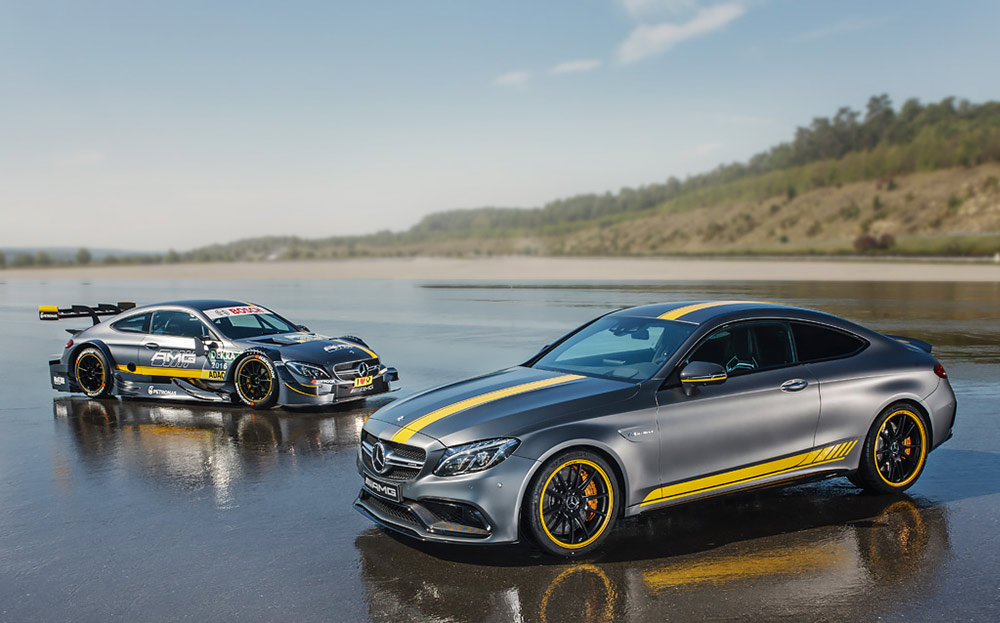 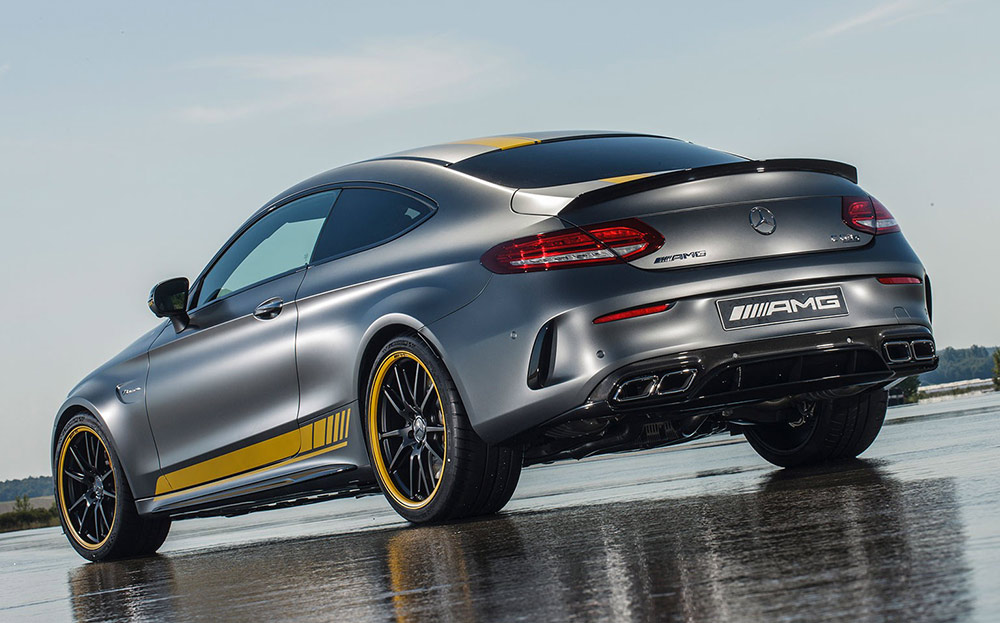 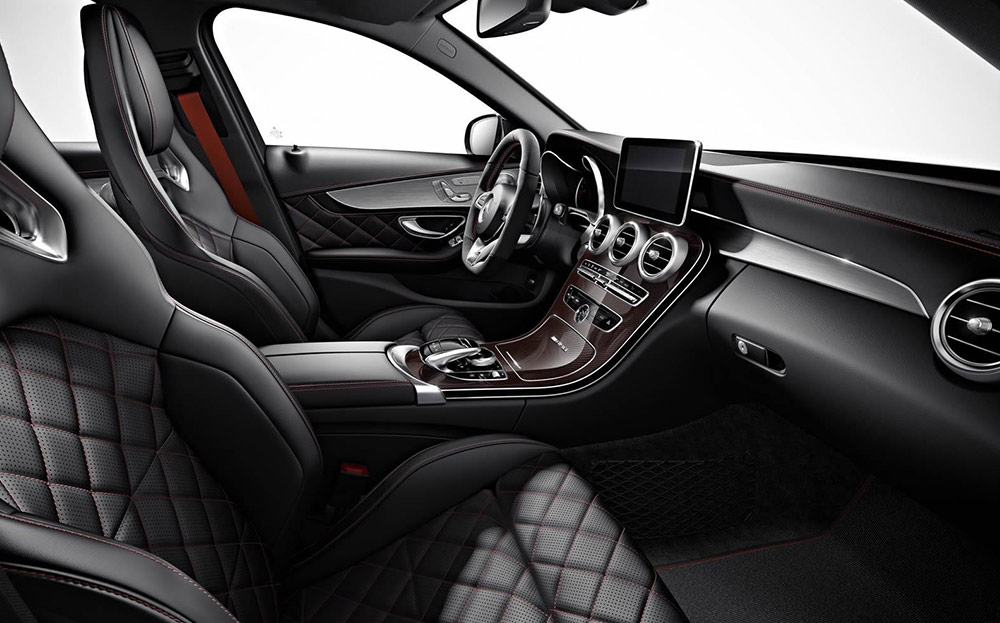 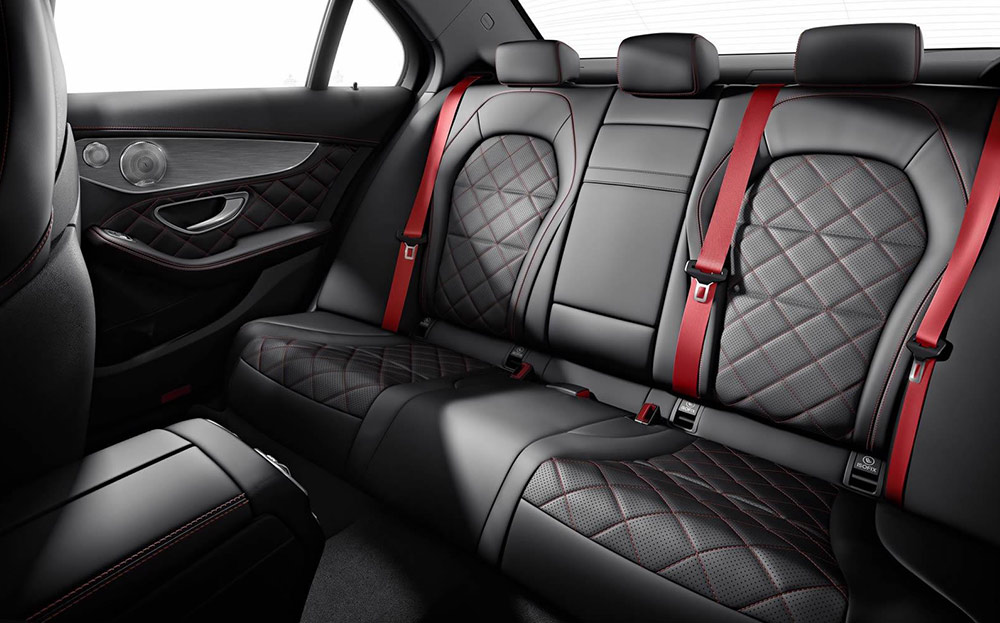 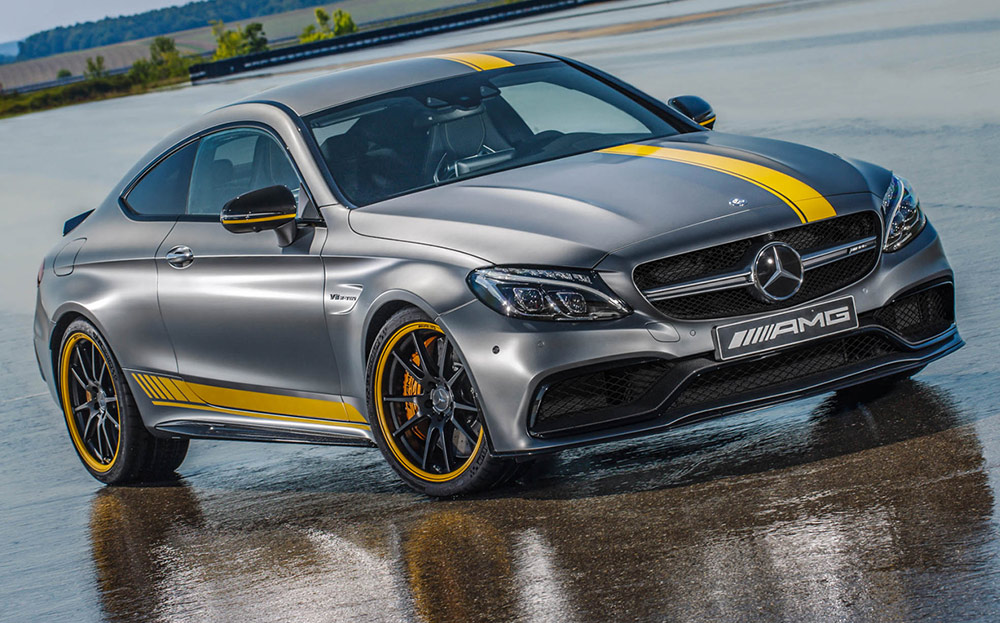 BEFORE WE get to those unavoidable matter of those yellow stripes, let’s explain exactly what we have here. This is the Mercedes-AMG C 63 S Coupé, the fastback version of the C-class, pumped up by Mercedes’ in-house tuner AMG.

The “63” part of the name is slightly misleading these days as the engine is no longer the 6.3-litre naturally-aspirated V8 that was in the old car, but a new, downsized four-litre V8 with a pair of turbos. Which sounds a bit disappointing, like swapping a lump of steak for a healthy salad.

But don’t worry, the new engine is essentially a wet-sumped version of the motor in the AMG GT sportscar, and more than capable of doing the heavy lifting expected of a Mercedes-AMG.

View the Mercedes C-class cars for sale on driving.co.uk

In fact, in standard format it manages 469bhp and 479 lb ft of torque, which is plenty. In the faster “S” version it has a faintly ridiculous 503bhp and 516 lb ft, which means that it has exactly the same power as the AMG GT S, but 37 lb ft more torque. In a smallish four-seat coupé, that’s probably more than enough.

And when its ballistic BMW M4 rival has a muscle deficit to the tune of 78bhp and 111lb ft, you know before turning the key that the Merc is probably going to be fairly rapid.

Rabid is probably a better description, mind. The sprint from rest to 62mph takes 3.9 seconds, and hits an artificial limiter at 155mph. Option the Driver’s Pack and you get a 180mph top speed, but that’s probably only appropriate for those who own private airfields or regularly attack stretches of de-restricted German autobahn.

The car we have here is the C 63 S Coupé in Mercedes-AMG’s now traditional ‘Edition One’ guise, which works as a fanfare special edition to whet enthusiasts’ appetites for the new model.

Aping the company’s racy DTM German Touring Car, all Edition One C 63 S Coupés get “Mango Selenite” matte grey paint, those rather attention-grabbing yellow stripes over the top of the car and the sides (the non-S Edition One gets graphite grey stripes), yellow detailing on the interior, a chunkier rear spoiler, front airdam and side skirts, and lots of gloss black bits.

There are black, forged wheels (19 inches on the front, 20 inches on the back), also with a yellow stripe around their circumference — you might be sensing a light theme here — and lots of other little tweaks that make the Edition One quite striking in a supermarket car park.

The flared arches look magnificent but actually they’re as per the standard AMG Coupé — in fact, on all of these AMG-designated models, only the frameless doors, boot and roof are shared with the standard two-door; the rest is bespoke.

Suffice to say it looks… butch. Costing around £5,000 more than the standard S, as a special edition it’s well thought out and relatively good value as an investment. However, unless your name is Kevin, as a daily driver it might be amusing for about a week before you got tired of people staring and started wishing the yellow lines away.

Go-faster stripes aside, it’s a superb car from behind the wheel. The engine fires up like a V8 should, all grumpy thunder and gurgling brawn, and continues in the same vein. It’s loud, but never annoying, bass-heavy and strong-sounding. As the revs rise so does the noise, until it’s bellowing incoherent anger at everything it passes.

And pass it will — the C 63 S Coupé is devastatingly fast. With so much power and torque and a slick and well-sorted seven-speed gearbox that you can operate with wheel-mounted paddles, this AMG makes overtakes eye-blink quick.

Driving slowly around town is comparable to any other coupé, huge c-pillar blindspots and all, but when you really allow the car and that epic engine their due, something magical happens. Mainly that you find your own head permanently forced back against the headrests, and a manic grin plastered across your face.

If you do find yourself with a private stretch of road or a handy racetrack, there’s even more to discover, because the C 63 S Coupé feels completely different to either of it’s closely-related saloon and estate brethren. It’s more focussed and a more committed driver’s car.

The steering is excellent — not as fast as some, but well-judged — the power delivery inexorable and the grip on offer beautifully progressive. Go too fast and the car communicates without taunting, warning with a gentle huff of understeer, and if you fancy being a hooligan, you can provoke easily controllable oversteer with ease.

Be careful here, though, because this is one of those cars that is so easy to drive near the limit that you can actually have some fun doing powerslides. And it’s got enough power to boil those very expensive rear tyres wallet-clenchingly quickly.

There are five dynamic modes available from the adjustable suspension and, as ever, they affect things like steering weight, throttle response, gearbox shift times and suspension stiffness.

Again, as usual, Sport + and Race are too stiff for UK B-roads, leading to some ungainly hopping and traction loss as the car fails to ride over our badly-scarred minor roads.

Sport is perhaps the best standard option for fast driving, and Comfort is the motorway and town go-to setting, though once you’ve set up the “Individual” settings, where you can programme your own preferences, I found myself just using that and Comfort. Race is best left for actual track days.

The best thing about this C 63 S Coupé is that although it looks aggressive, it’s actually quite subtle, if you left off the Edition One stripes, obviously.

It’s also devastatingly fast yet controllable, and feels reliable in its reactions. It’s a car that works with you, rather than against. Bluntly, it’s easier to drive quickly than something like a spiky BMW M4, and for 90% of us, that’s a bonus worth having.

True, it’s more expensive (an M4 starts at £57,000), struggles to do much more than 23mpg, is hell on gravel driveways and will cost you thousands in rear tyres if you decide to enjoy it to the fullest, but its the best thunderous four-seat coupé on the market at the moment. In the face of some strong competition, that’s no small thing.