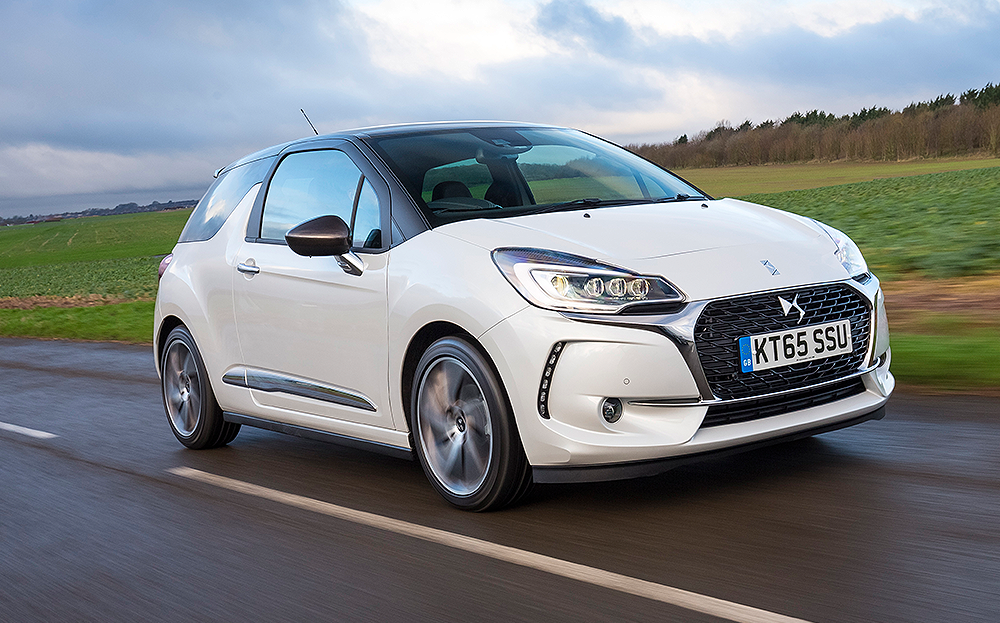 By Leon Poultney
Share Article
Improvements are skin deep only.
At a glance
Pros
Chic styling
Neat interior tech
Good range of engines
Cons
Pricy, even without the Citroën badge
Materials not as premium as advertised
Not a special drive
Specifications
Cars > DS Automobiles > 3

TAKE A good look at the new DS 3 and you’ll notice that the little French fancy has done away with its Citroën badges. We’ve had the DS 5 and DS 4; now it’s the turn of the popular supermini to shun the branding of its less chic parent company and instead don the chaussures of the standalone DS sub-brand.

In fact, les grands fromages at the car’s launch quickly became irked at the very mention of the ‘C’ word, as they firmly believe that their work is worthy of its own vehicle line-up, marketing campaign and — eventually — dealership network.

A brave move, you may think, but DS 3 has sold 390,000 units worldwide since its first appearance six year’s ago and almost 25% of those sales have been here in the UK, in fact putting us ahead of our Gallic friends across the channel.

View the used DS 3 cars for sale on driving.co.uk

It’s fair to say that us Brits have fallen head over heels for the chic exterior styling and Vogue-inspired interiors of the supermini, so the idea of additional flashy body addenda, improved interior tech and new personalisation options should further lure in British fashionistas.

Changes are mostly cosmetic. The front grille wears a new hexagonal ‘corporate identity’, complete with DS logo and smart LED lights, while the rear lamps have also received minor tweaks and a bunch of new alloy wheel designs are on offer to suit most tastes.

Inside, designers have clearly been on a cleaning spree, because the dash now hosts 20 fewer buttons and dials. In their place, a new 7-inch touch-screen display takes care of many of the car’s functions.

The upside is that Apple CarPlay and Mirrorlink for Android phones now feature but simple functionality, such as volume control, is relegated to tiny buttons that are hidden low beneath the gearstick. The dashboard might look pretty but it’s a fiddly and slightly frustrating thing to navigate. But hey, high fashion is never supposed to be comfortable, is it?

Interior materials have also been given a makeover, with real Nappa leather and neat, watchstrap-style seats offered as upmarket optional extras. It’s such a shame that other interior plastics still feel cheap and appear to scuff easily. The glovebox, for example, looks like it has been formed from recycled milk cartons and the lower dash feels scratchy to the touch.

Despite only being offered in a three-door body style, practicality is up there with its style-oriented rivals, which include the Mini Hatch and Fiat 500, as it trumps both in the boot space department, while rear passengers are treated to good levels of leg- and headroom.

Nothing has changed underneath the skin of the six-year-old machine, though, so previous DS 3 owners will find that the driving experience remains identical. The steering is set up for comfort, rather than all-out performance, so lacks a bit of feel but is perfect for inner city manoeuvring.

The chassis and suspension do a good job of providing some lukewarm thrills on the B-roads, and the new DS 3 can be hustled through corners without too much understeer or body roll. However, offerings from Mini will better suit those that really like to open the taps on a twisty route.

If we were gifted a pound for every time the phrase ‘avant garde styling’ was mentioned during the launch. . .

A 208bhp Performance edition, complete with a Torsen limited slip differential for improved traction and cornering, will go on sale later this year and it will bridge the gap between standard DS 3 models and the full-fat Racing edition. Expect that to pack even more of a performance punch when it eventually arrives.

Engine selection should really be down to the sort of lifestyle the car will lead. Those with regular long commutes should stick to the BlueHDi 120 diesel, which blends decent performance (0-62mph in 9.4 seconds) with a claimed fuel economy figure of 78.5mpg (combined) and tax-avoiding CO2 emissions of 94g/km.

However, the competitively priced PureTech 130 petrol offers a more thrilling drive and its perky performance is great for nipping in and out of busy town traffic, especially when mated to the 6-speed manual gearbox (an EAT6 auto is also available). It’s not quite as economical as the aforementioned diesel but well suited to city life.

It’s clear the DS brand is targeting a very specific type of customer, because if we were gifted a pound for every time the phrase “avant garde styling” was mentioned during the launch, we’d be retiring in Mauritius.

There may be better performing, more practical and cheaper options on the market but this will unlikely put off potential buyers. With more than 3m personalisation options and a choice of both cabrio and hatch body styles, DS 3 is a must-have fashion accessory rather than a sensible family hatch choice.