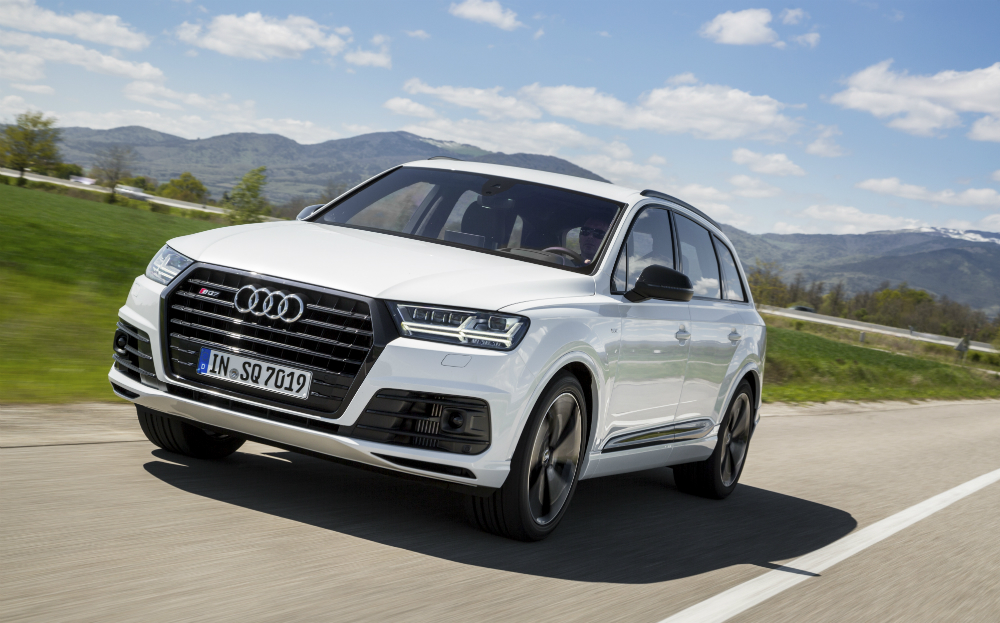 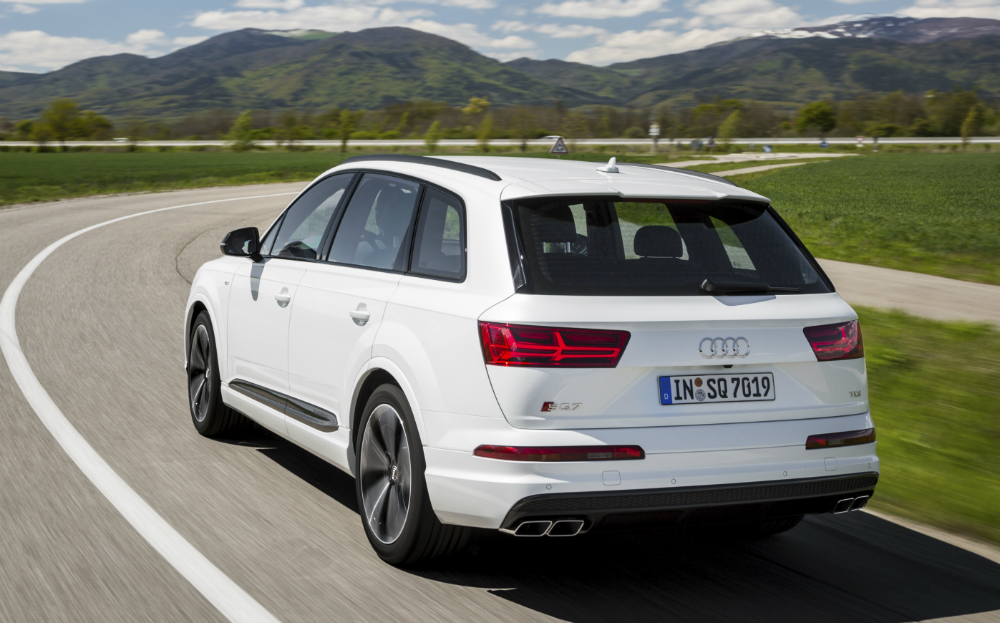 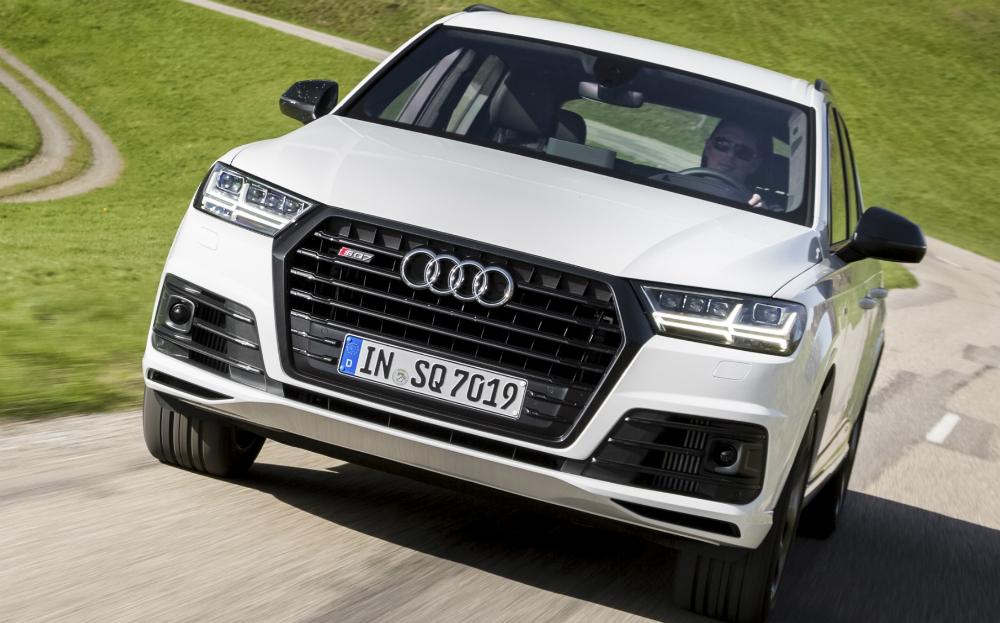 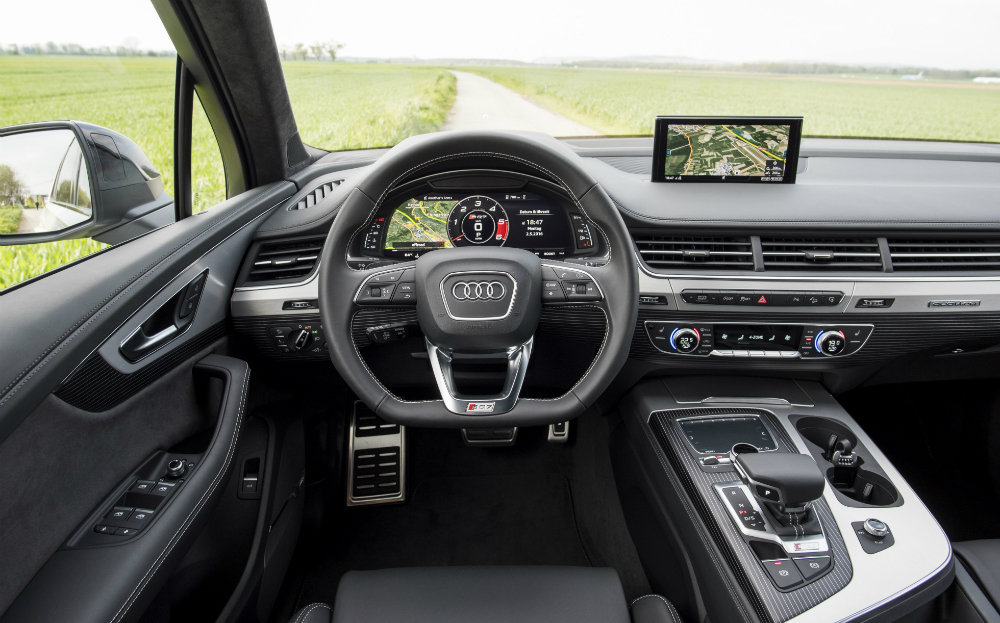 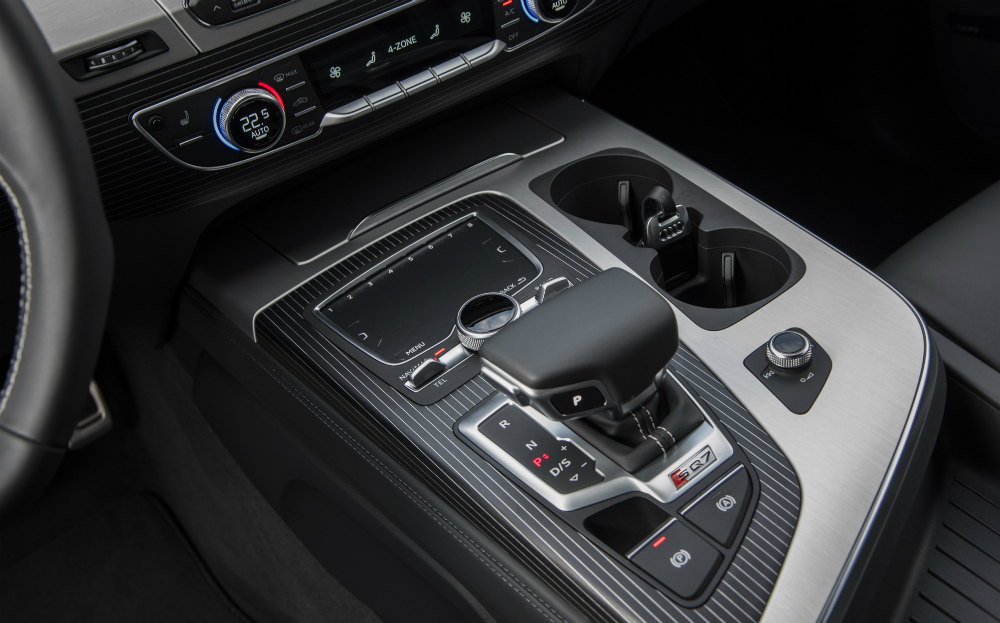 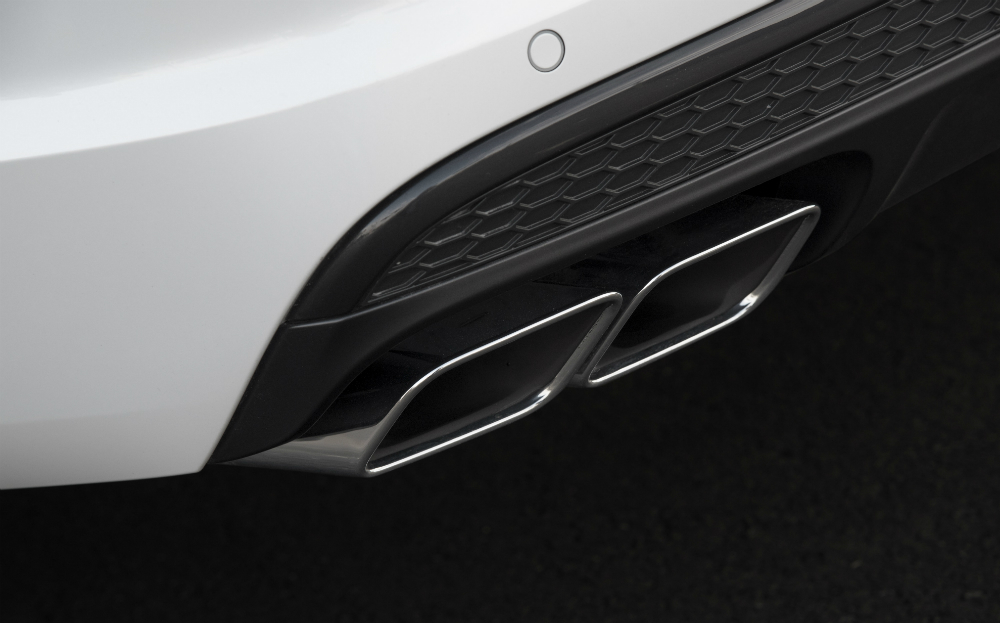 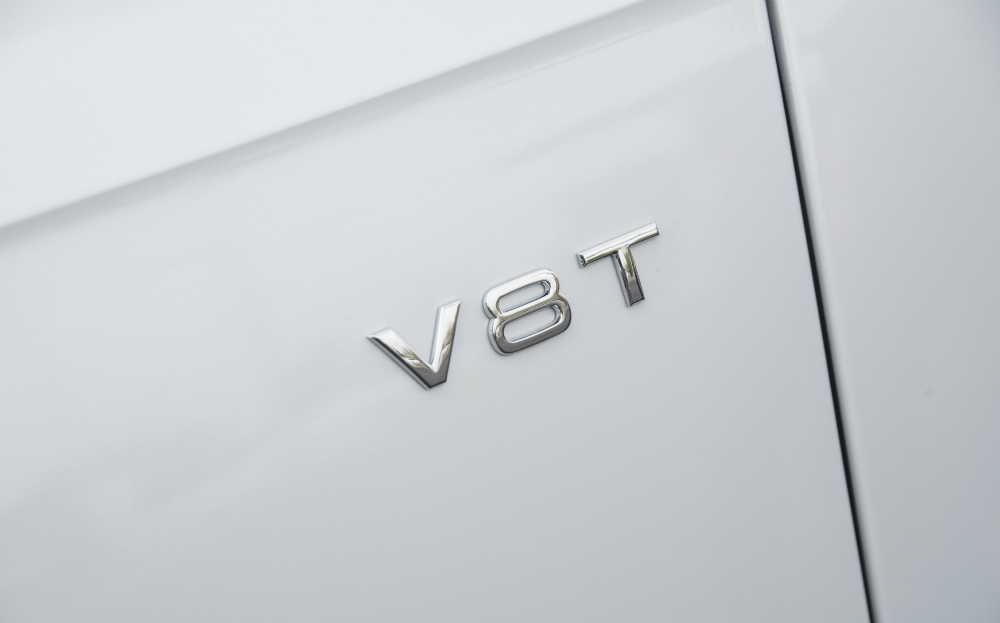 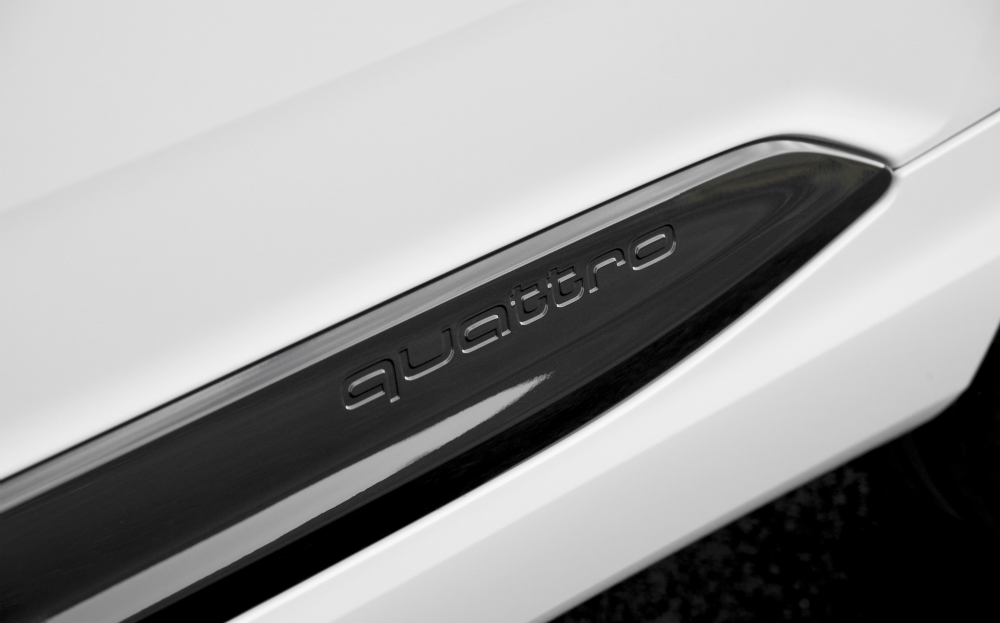 LIKE LEAVING a jewel thief in charge of a safe deposit vault, putting the dog in charge of your roast dinner while you pop to the loo or browsing eBay when you’re three sheets to the wind, inviting journalists to tackle a winding mountain road in a huge seven-seat diesel-powered SUV seems a bad idea.

The catalogue of potential disasters — involving burning brakes, disintegrating tyres and precipitous drops — is lengthy. But Audi’s engineers clearly thought long and hard about all these scenarios when designing the new SQ7, the flagship version of the company’s largest car. They knew full well that, for all their macho styling, most SUVs fall to pieces when pointed in the direction of a bendy road.

View the Audi Q7s for sale on driving.co.uk

So they opened up the cupboard marked “Top secret”, pulled out a collection of gadgets and gizmos — the sort of half-developed stuff that’s lying around after a hush-hush supercar project has been mothballed — and fitted it all to the SQ7.

There was a 4-litre bi-turbo V8 TDI engine with an electrically driven compressor — a world first, according to Audi. Then came an active suspension system, designed to stop a heavy car rolling about like a ship at sea. Next up was a fancy four-wheel steering system, the sort found on the latest Porsche 911 GT3 RS, which should make a large car feel more agile.

The SQ7 can pull down the trousers of a BMW X5 M50d, Porsche Cayenne S diesel and Range Rover Sport SDV8 and give them all a good spanking

The icing on the cake was an uprated quattro four-wheel-drive system with a sporty rear differential. Judged on specification alone, the SQ7 appeared to have more in common with a rally car than a family SUV that divides its time between school run and supermarket.

Would it all work, though? Or just add to the complexity, weight and price of this supersize, super-sporty SUV? A snaking mountain pass just outside Mulhouse, where France approaches the Swiss and German borders, would provide the answer.

Within a few tortuous twists and turns it became apparent that the SQ7 can pull down the trousers of a BMW X5 M50d, Porsche Cayenne S diesel and Range Rover Sport SDV8 and give them all a good spanking.

You might expect a 16ft car weighing nearly 2.5 tons to feel as responsive as a barge with a worn-out tiller. But the SQ7 dances through hairpins and shrugs off high-speed changes of direction. Push it as hard as you dare and its clever suspension, four-wheel steering and rear differential have it pivoting about its axis and steaming out of corners with a hint of oversteer and tyre smoke.

It’s a feat that scrambles your brain: somehow Audi has taken its largest car — a seven-seat family holdall — and made it more nimble and fun to drive than many sports cars, including its own RS 4 and RS 6.

We should point out that the clever stuff (active suspension, four-wheel steering and rear differential) will be part of an optional Dynamic pack costing in the region of £8,000. But anyone who spends nearly £71,000 on an SQ7 would be barmy not to add this option. A word to the wise: dispose of this car the day before its warranty runs out, or face the possibility of mortgage-sized bills should the tech start to play up.

No options are needed to bring out the best from the new V8 turbodiesel engine. It is a powerhouse, with a peak torque of 664 lb ft that is ready and waiting from just 1,000rpm. For a more effective thump in the back you’d have to step into the path of the TGV.

Key to this is the electrically driven compressor, in effect a third turbo, which fills the small gap at the bottom of the engine’s rev range with power and performance from idling speed.

The engine also sounds the business. There’s the faintest hint of a TVR V8 rumble to it, but that can be faded down by switching the driving mode out of Dynamic and into, say, Comfort and seeing whether it’s possible to restrain your right foot enough to get anywhere near the official fuel economy of 39mpg. Somehow it seems doubtful.

To keep the engine’s emissions in check the SQ7 comes with a pair of catalytic converters and a particulate filter, as well as the AdBlue injection system to keep NOx levels to a minimum.

Downsides? Well, the eight-speed automatic gearbox would often shunt during gearchanges. And the interior has all the character of a German briefcase: it appears to have been designed by a man who goes home after work and spends 2.75 hours arranging his sock drawer. A Volvo XC90 is a nicer place to be.

But Audi hasn’t skimped on practical touches, such as six Isofix child seat mounts as standard. There is legroom to spare in front of all three rows of seats, plus you have the option of a Bang & Olufsen “advanced sound system” poky enough to power a house party — if you can get the car indoors.