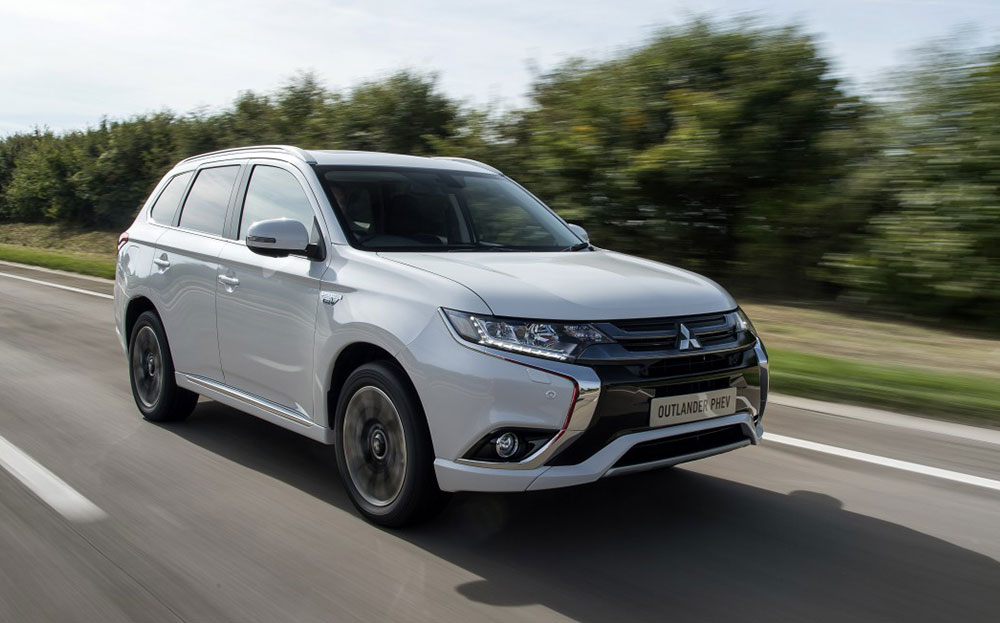 MITSUBISHI. Just mentioning the name sends a curious shiver through our household. Once upon a time, many moons ago, we briefly became a two-Mitsubishi family. I had got rid of my midlife-crisis Porsche after poseurs in other Porsches started waving at me at traffic lights and I realised that I had become a poseur myself. My wife had an old Range Rover that, true to form, kept on breaking down. So we decided to simplify our motoring existence.

Back then I had just been filming in the southern states of America and had been driving a seriously powerful pick-up the whole time. I loved the thing: it was fun, it was practical and it did the business. So I did some extensive research — Google — on pick-ups in the UK, but there was a lot less choice. In the end a Mitsubishi seemed to be the answer. So my wife and I ended up at a dealership that couldn’t believe its luck at the morons who had just walked into its premises.

Two hours later we drove out in an L200 Warrior — I just couldn’t drive the alternative, a Barbarian — and a Grandis for the wife. To say she was not thrilled would be an understatement. She’d grumbled about the Range Rover and I’d replaced it with what she called “the minibus”. It’s true that the Grandis was not grand, but it did the job: it could take seemingly innumerable children and dogs and ferry them around the Cotswolds without breaking down. My wife, being the lovely Canadian she is, complained about it only every time the subject came up, but never on any other occasion, except when she was angry or awake.

My wife complained about the Grandis only every time the subject came up, but never on any other occasion, except when she was angry or awake

Meanwhile, I drove the Warrior for about a year before I realised I was not being all-American and cosmopolitan; quite the opposite. I appeared to have joined a curiously Essex-ish subgroup of drivers. When I saw a photograph of Jodie Marsh in one, I snapped, and we got rid of both vehicles the next day. There are times when one just has to draw the line.

So it would be fair to say that excitement was not high in the Joly household when the new Mitsubishi Outlander PHEV rolled up the drive. The man delivering it had a companion along with him to drive him back. He was in a Warrior.

“They’re great, aren’t they?” he said, smiling like a Moonie.

Now, eagle-eyed readers will know that last week Jeremy Clarkson bemoaned the fact that he had tried to borrow one of these cars but Mitsubishi had refused. Why I succeeded is a mystery that only the manufacturer can solve.

Suffice it to say that I had high hopes for this vehicle. I loved the original Outlander PHEV, as did thousands of others: when it was launched, in the spring of last year, Britain’s annual sales of plug-in hybrids were below the 1,000 mark. A year later Mitsubishi had sold 8,000 Outlander PHEVs. 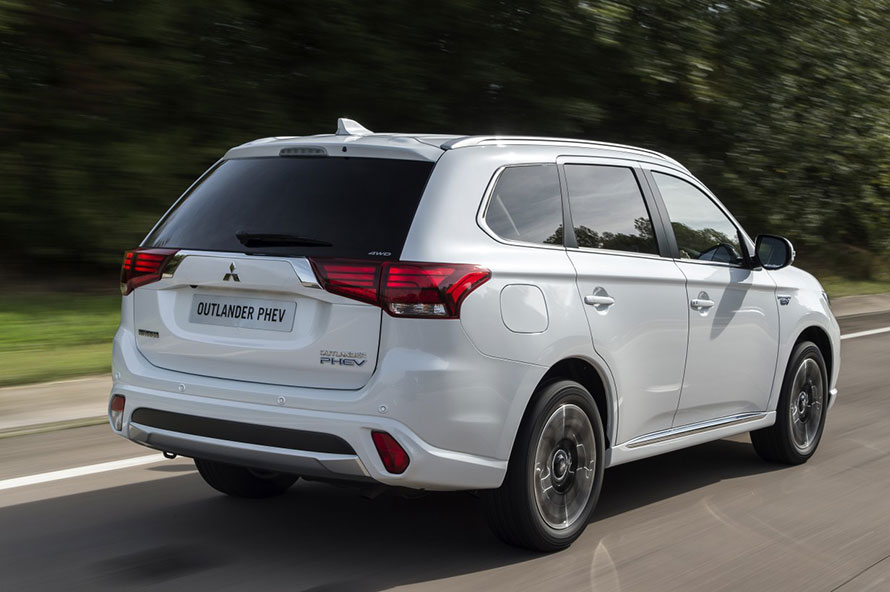 The updated version is said to be a more refined version of the original, with the electric features ramped up a bit. Mitsubishi says that what customers liked most about the older car was its tremendous acceleration — thanks to its electric motor, it had bags of torque. This version has had its software tweaked to make it even quicker off the mark: the 0-25mph time is now two seconds shorter.

The suspension has been given a makeover too, to make the car less wallowy in the corners, the power steering has been retuned to make it more interesting to drive and there have been a few cosmetic retouches such as wider LED tail-lights to give the car a subtly fresher look than the one I drove a few months ago.

I hopped in to give it a spin. I can never quite get over the silence of electric cars — it just doesn’t feel right when you turn the things on and nothing happens. The good news is that it confuses my pig Wilbur, who has taken to ramming any car that comes up the drive. Wilbur is supposed to be a kunekune (a short and hairy pig from New Zealand), but we all now strongly suspect his mother was ravaged by a wild boar. The postman refuses to enter our premises, as his van acts like a red rag to a boar.

The silence of the Outlander PHEV appeared to freak Wilbur out, though, and he kept a safe distance from it for the entire week. This pig-fear inducement would be enough in itself for me to get one, but I’m fairly sure that this would be a somewhat limited marketing strategy.

On the road the silence became a little less . . . silent. The Outlander has an extraordinary number of alarms and is something of a nag. Warnings beep if you change lanes suddenly, and if anything appears on the road ahead of you the whole thing goes crazy and starts telling you to brake. If you get out of the car with the engine running, and especially if you then try to open the boot, the vehicle starts grumbling. It got on my nerves after a bit — like some whining hippie constantly back-seat-driving. I could turn some systems off, but others, like hippies, were constant unwanted companions.

The Outlander PHEV comes with paddle shifts, although they are not for changing gears but rather for regenerative braking, which recharges the battery. The paddles offer you five levels: if you want to harness lots of energy — for example, if you are going downhill — set it to five, but if you don’t, keep it on one. 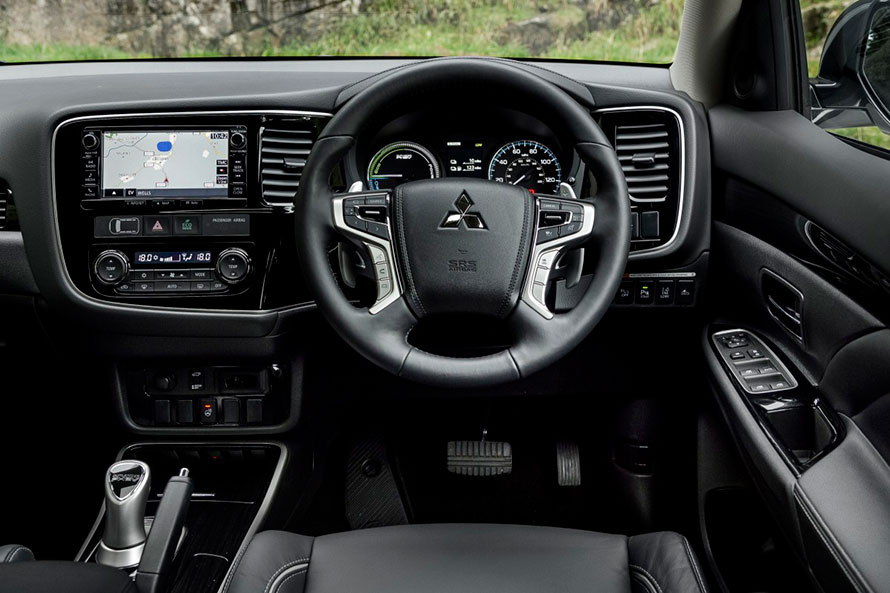 This is as much as I could make out about the system and I just picked one at random and used that. I’m sure that a smarter person would be able to do more with it, but I, frankly, couldn’t be arsed. Mitsubishi says you can regain about 10 miles for every 100 miles you drive, which doesn’t seem bad, although it’s hardly planet-saving.

The electric portion of the car alone can do about 32 miles, and so if I just did the school run every day and recharged it at home (it takes five hours), then I really wouldn’t need to visit my petrol station. This would be a shame, as I’m partial to bags of pickled onion Monster Munch and this is the only place that I can sneakily buy some without my wife looking at me in a disappointed manner.

Should you wish to travel further, the petrol engine kicks in, and I found the fuel economy pretty disappointing. Officially the car can do 156.9mpg, but that is in tests that give disproportionate weight to the battery-only mode. In the real world on a motorway run you can hope for mpg figures in the low forties.

If I just did the school run every day and recharged it at home, then I really wouldn’t need to visit my petrol station. This would be a shame, as I’m partial to bags of pickled onion Monster Munch

As usual, I found the sat nav — like hotel TV remotes — almost unusable. Surely someone can invent a simple one that works. I once activated the feature on my Land Rover Discovery’s device that showed nearby hotels. I’ve never been able to turn it off since, and when I get to London I can’t see anything but little pictures of beds everywhere. Likewise, Mitsubishi’s sat nav is a bit pony.

The long and short of this car? It’s OK. It had plenty of room for my dogs, the children were happy in the back and, as I said before, it has pig-repellent properties. It does manage to get close to solving the electric conundrum: it has enough battery range to do a daily drive but also has the capacity to do much longer trips on petrol.

The Outlander PHEV is not the world’s most exciting drive, but then you didn’t expect that, did you? If I wanted a plug-in hybrid with lots of room, I could do a lot worse than this car.

I’m not sure how much of a recommendation that is, but it’s all you’re going to get.

Search the used Mitsubishi Outlanders for sale on driving.co.uk