By Dom Joly
Share Article
Here's the racer, you supply the boy
Pros
Beefed-up and bristling with fins
Looks like a getaway car and drive like one
Utterly awesome (if you're the right age)
Cons
Maybe a touch too hot for a hatch
A wimpy horn
For 18-25's only
Cars > Honda > Civic 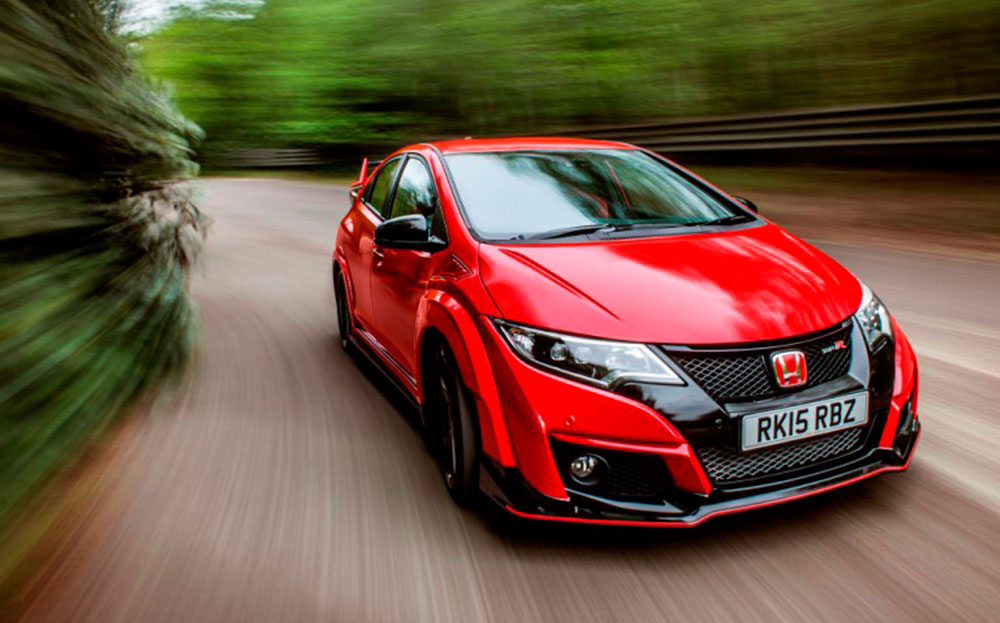 MY FIRST motorised vehicle was a Honda Camino 49cc moped, which I painted a rather racy bright pink to offset my goth get-up. I used to drive it to college in London when I was 17 and I loved it. It was the first taste of independence, of freedom . . . and of travelling at more than 20mph. Admittedly it must have looked a little like Robert Smith had stolen Lady Penelope’s runabout, but I was still in that state of blissful unawareness that is pimply youth.

View the used Honda Civics for sale on driving.co.uk

Somebody took offence at my appearance, however. As I was attempting to overtake a double-decker bus on Gloucester Road, a Sloane Ranger in a Peugeot 205 (what else?) slammed into me from the side. I was taken to hospital with serious injuries to my left knee and my beloved Honda Camino was dispatched to the great scrapyard in the sky.

Since then I’ve always had a soft spot for the brand and I felt a small surge of excitement when I learnt I was going to be testing a Honda for The Sunday Times. But which one?

It so happened that when the Honda Civic Type R was delivered to my house for review purposes, nobody was at home. Somehow the driver managed to open the gate and for some reason left the vehicle sitting in my drive with the engine running. When I got home several hours later I saw it from a distance and assumed a gang of joyriders was rifling through my house with their stolen car of choice waiting outside. 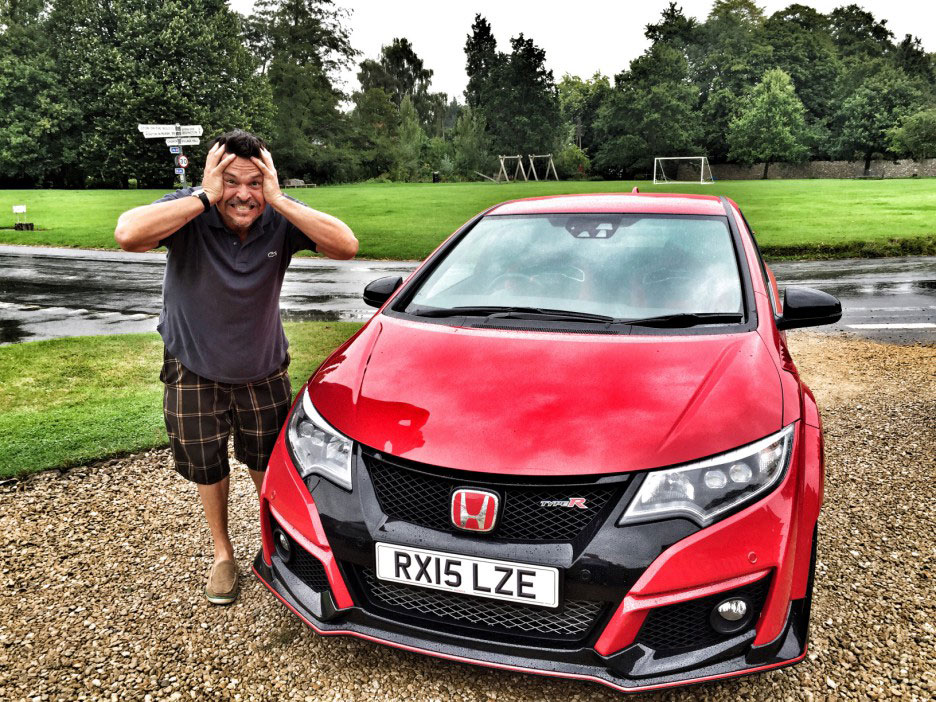 It just looked like a getaway car. Or maybe a family hatchback that had been pumped full of more steroids than Ben Johnson and then spent a day in the Pimp My Ride garage. It is bristling with fins and jagged bits and exhaust pipes — a boy racer’s wet dream.

I immediately went into commando stealth mode, told my family to stay where they were and did a thorough search of my home — by kicking in doors and sending Wilbur, my pet pig, into any areas that I considered too difficult to enter safely. After 10 minutes I ascertained that the house was clear and waved the family in. Then I remembered that the car was being delivered for review. I assumed the driver must have got into an altercation with Wilbur and run away. This has happened before — on an almost daily basis in our postman’s case. Wilbur is not a pig you want to cross.

Later I took the Honda for a spin round some country lanes. Oh my God, did I have fun. If and when you should need a getaway car, this is most definitely the car you would want. It is unbelievably fast and manoeuvrable. Imagine yourself driving away after a successful robbery when you hear a siren behind you. It’s the rozzers! No worries. Time to use your killer trick. You lift your tattooed hand to the steering wheel, your fake gold chunky bracelet clinking. You hover above the sexy button marked “+R”, just toying with your pursuers.

The display flashes red, your mist goes red and an intriguing round red target symbol appears on the dash. For a brief moment you wonder whether this vehicle has rockets. Then you realise it’s just another curious sports display thing that you will never understand the purpose of.

You put your foot down and the car roars away, hugging the tight, windy roads as though stapled to them. You and the car are as one — the joyrider and the ride enmeshed in one adrenaline-fuelled riot. The cops can’t keep up with you and you lose them within three minutes before heading into town to treat yourself to a cheeky Nando’s, while tooting the disappointingly un-macho horn in delight.

Here’s the problem. Honda has clearly gone insane and turned the humble Civic into a full-on boy-racer machine, which even by Type R standards of the past is utterly wild. This car is amazing to drive — the most fun I’ve had in a car, hands down. The problem is that it is seemingly aimed at the 18 to 25-year-old market. Nobody else would want to get into a car that looks like this. It is so over the top and silly that if you get into it and are aged over 25 then it is a public admission that you are an idiot. 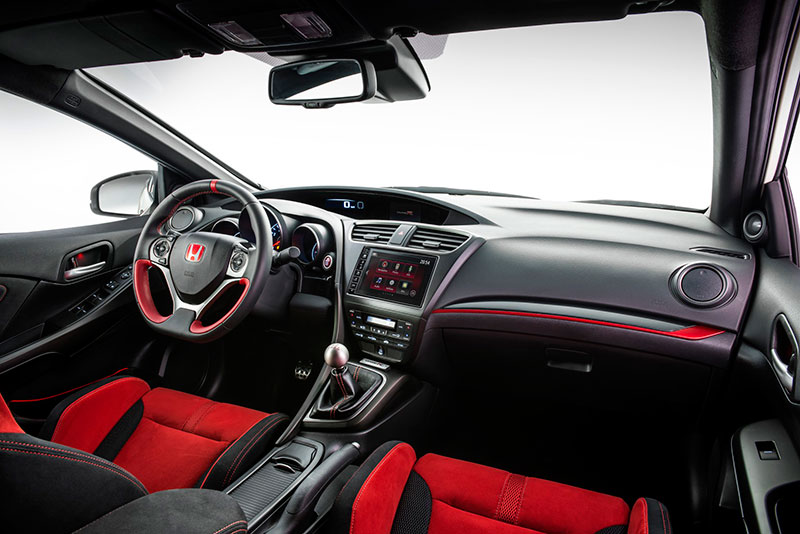 Nobody can or should take you seriously if you drive this car. Sure, you’re having the time of your life — I absolutely was. Unfortunately, every time I stopped at lights or got out of the thing I could see people pointing and laughing: “Look, it’s Dom Joly. I bet he thinks that car is really cool but it makes him look ridiculous.”

I wanted to shout back: “It’s not my car, I’m only test-driving it. I know it looks ridiculous but, trust me, if you drive this thing, you will share my excitement.” Stacey, my wife, told me not to shout this stuff, as it would make me look even more silly.

If you are 18 to 25 you will love this car. You will also not be able to afford the insurance and, even if you can, you are highly likely to kill yourself in it because you can’t drive properly and will have a friend called Kevin in the back seat urging you to floor it because he has drunk too much strong cider and wants to snog Shelly whom you also quite like.

I have no idea what Honda was thinking when it brought out this car. It’s more fun than my wife’s BMW M 135i, which she tortures by driving around in economy mode . . . but at least I can drive that without public ridicule (and put it in sports mode and not tell her).

I’ve got nothing more to say. This is the most fun car I’ve had the privilege of driving. It’s awesome . . . utterly awesome . . . but I have no idea who is going to drive it. If you get the chance, however, put on a disguise and go for it. You will not regret it.